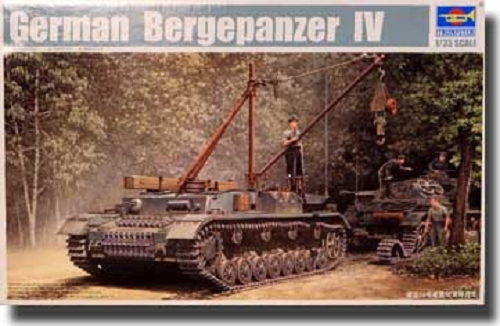 In keeping with the wartime German design expediencies of mounting an existing anti-tank gun on a convenient chassis to give mobility, several tank destroyers and infantry support guns were built around the Panzer IV hull.

Both the Jagdpanzer IV, initially armed with the 75-millimeter (2.95 in) L/48 tank gun, and the Krupp-manufactured Sturmgeschütz IV, which was the casemate of the Sturmgeschütz III mounted on the body of the Panzer IV,[116] proved highly effective in defense.

Cheaper and faster to construct than tanks, but with the disadvantage of a very limited gun traverse, around 1,980 Jagdpanzer IVs and 1,140 Sturmgeschütz IVs were produced. Another tank destroyer, the Panzer IV/70, used the same basic 75-millimeter L/70 gun that was mounted on the Panther.

To make room for the new equipment, ammunition stowage was reduced from 87 to 72 rounds. The vehicle could coordinate with nearby armor, infantry or even aircraft. Seventeen Panzerbefehlswagen were built on Ausf. J chassis in August and September 1944, while another 88 were based on refurbished chassis.

The Panzerbeobachtungswagen IV (Pz. Beob. Wg. IV) was an artillery observation vehicle built on the Panzer IV chassis. This, too, received new radio equipment and an electrical generator, installed in the left rear corner of the fighting compartment. Panzerbeobachtungswagens worked in cooperation with Wespe and Hummel self-propelled artillery batteries.

Also based on the Panzer IV chassis was the Sturmpanzer IV 150-millimetre (5.91 in) infantry-support self-propelled gun. These vehicles were primarily issued to four Sturmpanzer units (Numbers 216, 217, 218 and 219) and used during the battle of Kursk and in Italy in 1943.

Furthermore, a 105-millimetre (4.13 in) artillery gun was mounted in an experimental demountable turret on a Panzer IV chassis. This variant was called the Heuschrecke ("Grasshopper"). Another 105 mm artillery/anti-tank prototype was the 10.5 cm K (gp.Sfl.) nicknamed Dicker Max.

Four different self-propelled anti-aircraft vehicles were built on the Panzer IV hull. The Flakpanzer IV Möbelwagen was armed with a 37-mm (1.46 in) anti-aircraft cannon; 240 were built between 1944 and 1945.

In late 1944 a new Flakpanzer, the Wirbelwind ("Whirlwind"), was designed, with enough armor to protect the gun's crew and a rotating turret, armed with the quadruple 20 mm Flakvierling anti-aircraft cannon system; at least 100 were manufactured.

Sixty-five similar vehicles were built, named Ostwind ("East wind"), but with a single 37 mm anti-aircraft cannon instead. This vehicle was designed to replace the Wirbelwind. The final model was the Flakpanzer IV Kugelblitz, of which only five pilot vehicles were built.

Although not a direct modification of the Panzer IV, some of its components, in conjunction with parts from the Panzer III, were utilized to make one of the most widely used self-propelled artillery chassis of the war—the Geschützwagen III/IV.

This chassis was the basis of the Hummel artillery piece, of which 666 were built, and also the 88-mm (3.46 in) gun-armed Nashorn tank destroyer, with 473 manufactured.

To resupply self-propelled howitzers in the field, 150 ammunition carriers were manufactured on the Geschützwagen III/IV chassis.

Another rare variant was the Bergepanzer IV armored recovery vehicle. Some were believed to have been converted locally, 21 were converted from hulls returned for repair between October 1944 and January 1945. The conversion involved removing the turret and adding a wooden plank cover with an access hatch over the turret ring and the addition of a 2-ton jib crane and rigid towing bars.
​THE KIT:

Trumpeter is a prolific model company based in Macau, China. They manufacture all manner of model subjects in the popular scales.

The kit comes in a shrink-wrapped tray and lid type box. It has a smaller box taped to one end of the tray. If is wasn't for this box taking some space the kit would be blousy and be 4 1/2" too long.

The box art shows a Bergpanzer IV parked in a woods with it's crew. It is overall panzer grey.
One side of the box has a color profile of the box top Bergepanzer IV and the history of the vehicle, photos of the photo etched brass parts. Made in China and safety warnings are also printed on the side.

The other side has walk around photos of the completed model.

Page 1 begins with a black and white side view of the Bergpanzer IV in overall Panzer Gray with just a German cross on the sides of the hull, over READ BEFORE ASSEMBLY instructions. international assembly symbol explanations and decal application instructions in Chinese and English.

Page 2 is the parts trees illustrations. 5 parts on tree letter L are excess and not needed to complete the model.

Page 3 through 20 give a grand total of 34 assembly steps.

The second instructions is the painting and marking guide, printed on one side in full color on slick-coated paper.

It has a 5 view of a Bergepanzer IV in overall Panzer gray, with a white 211 on the rear and German crosses on the sides of the hull. Mr. Color brand paints are suggested to use. 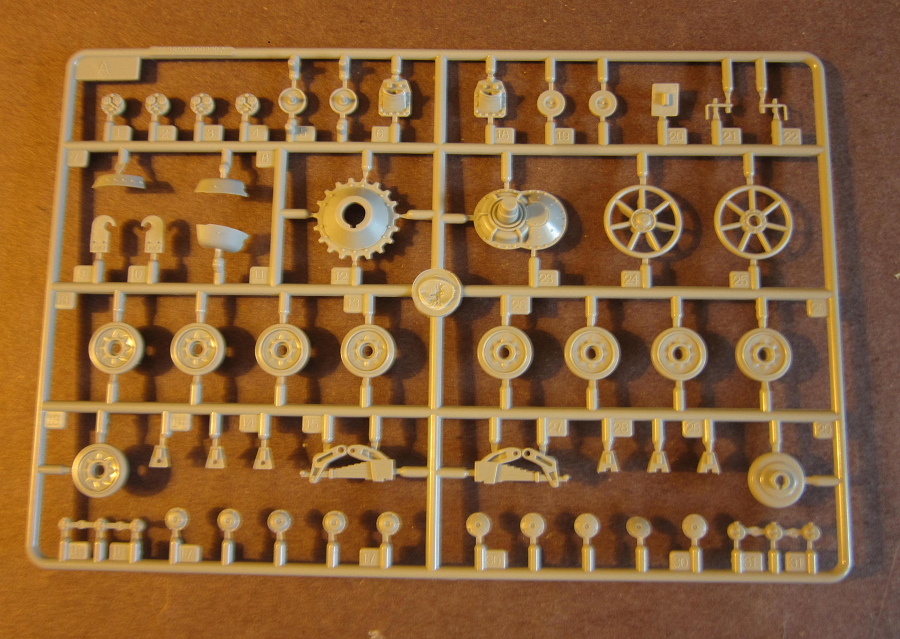 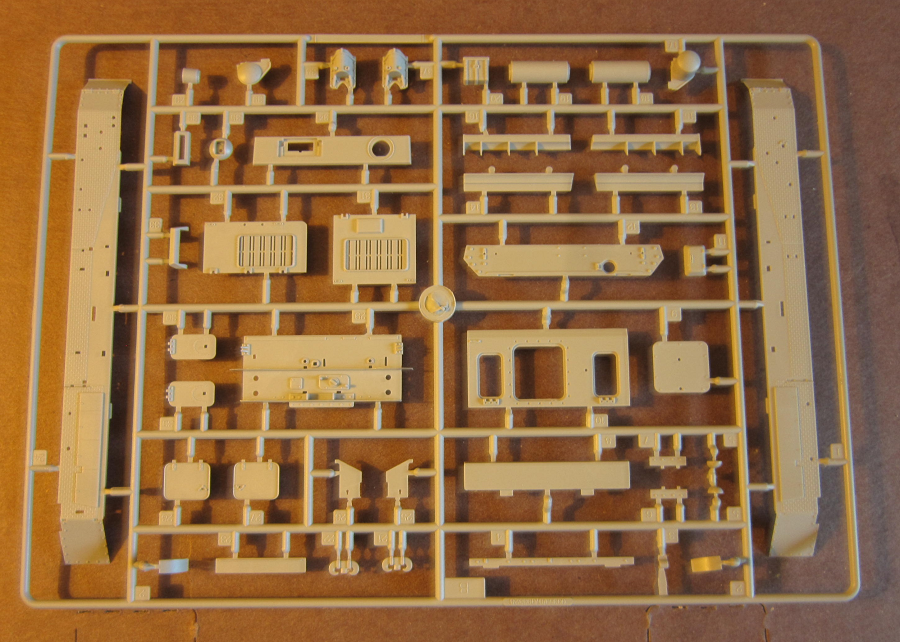 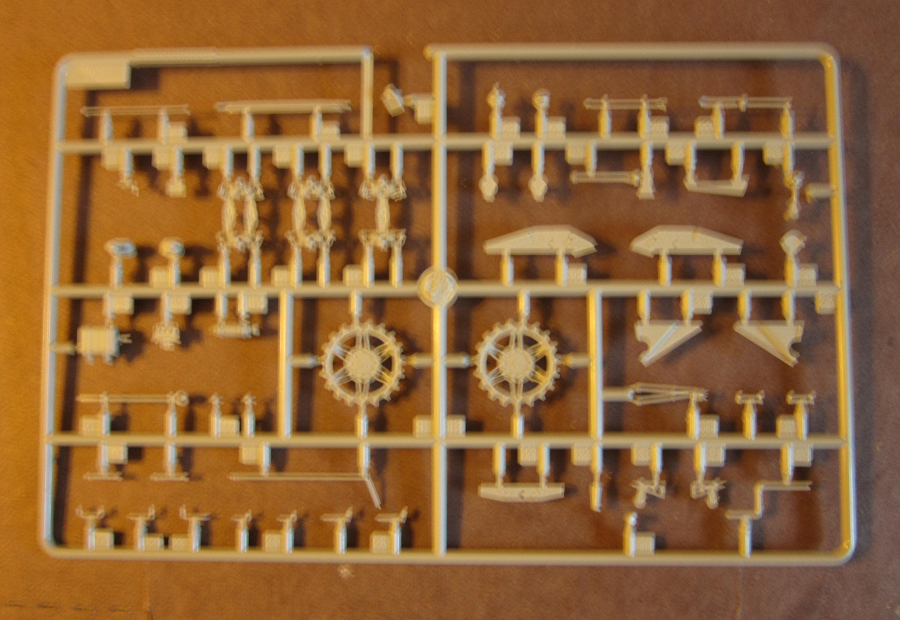 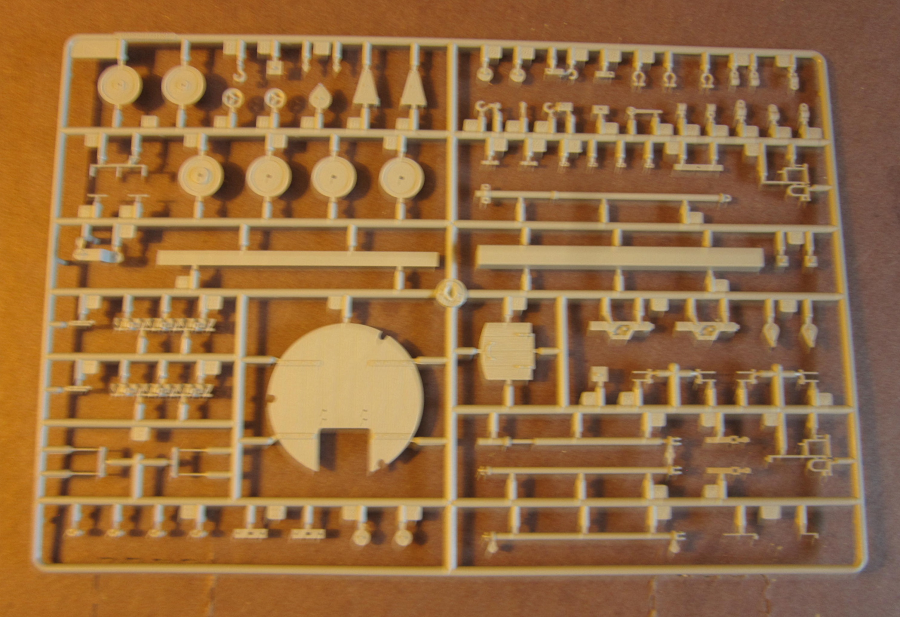 ​Lettering jumps to the 7 identical  light-gray letter H trees. They  hold individual track links (32 parts per tree) These are the ONLY trees that are in a sealed clear cello bag. 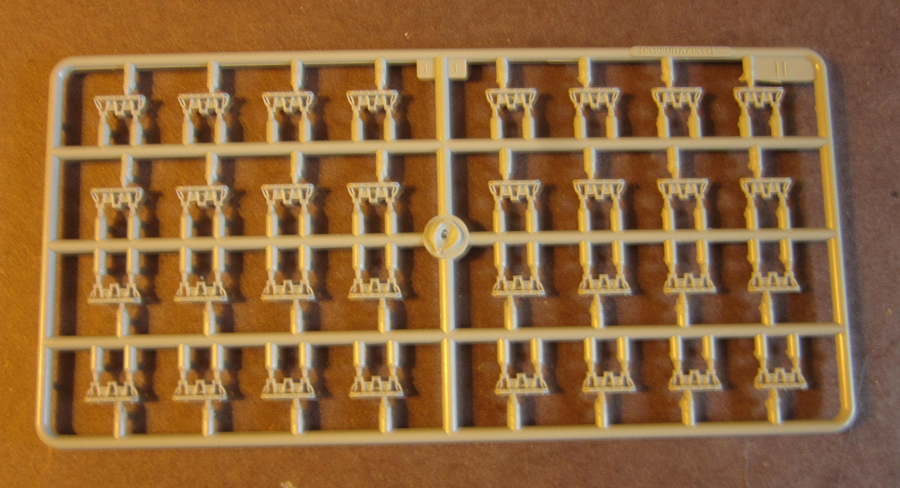 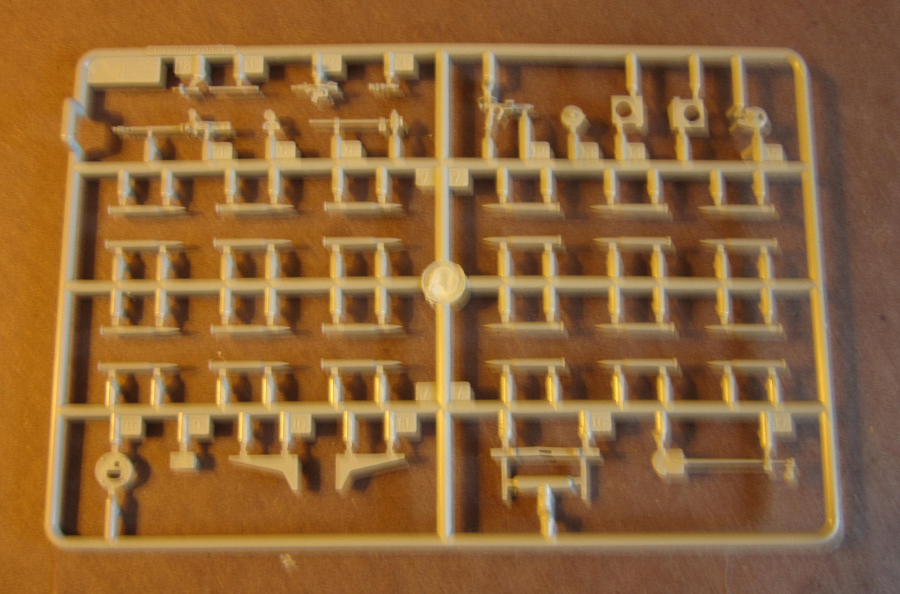 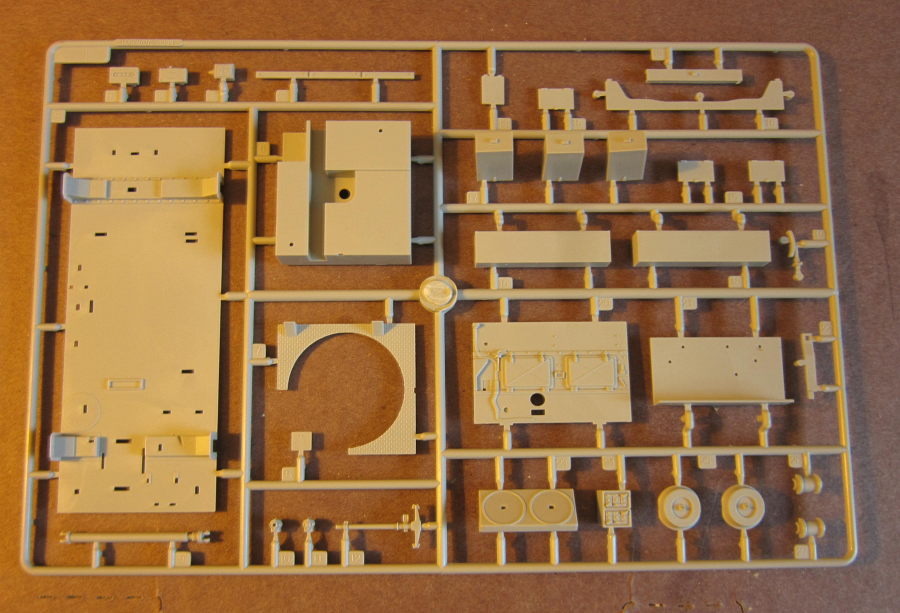 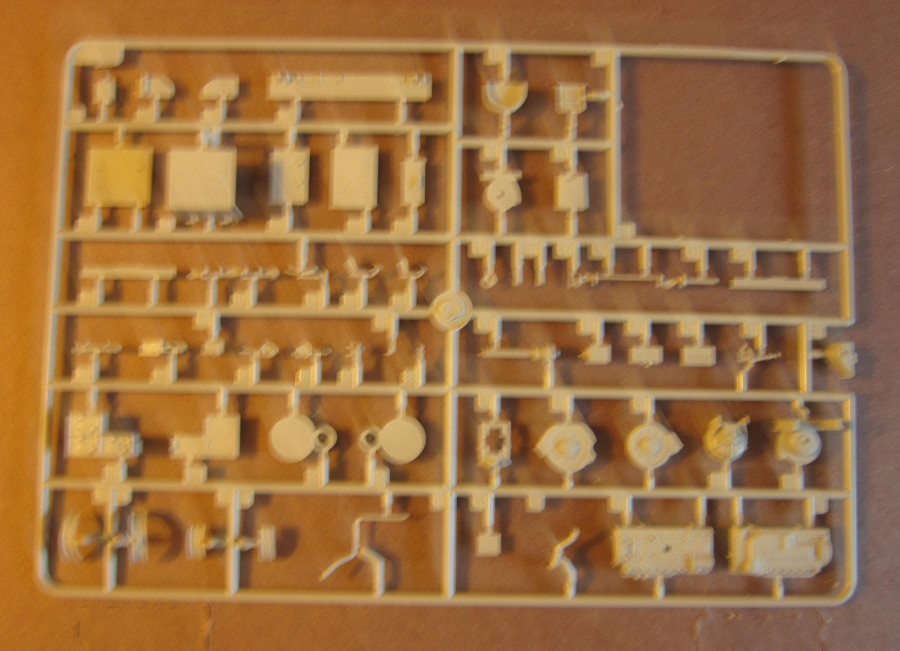 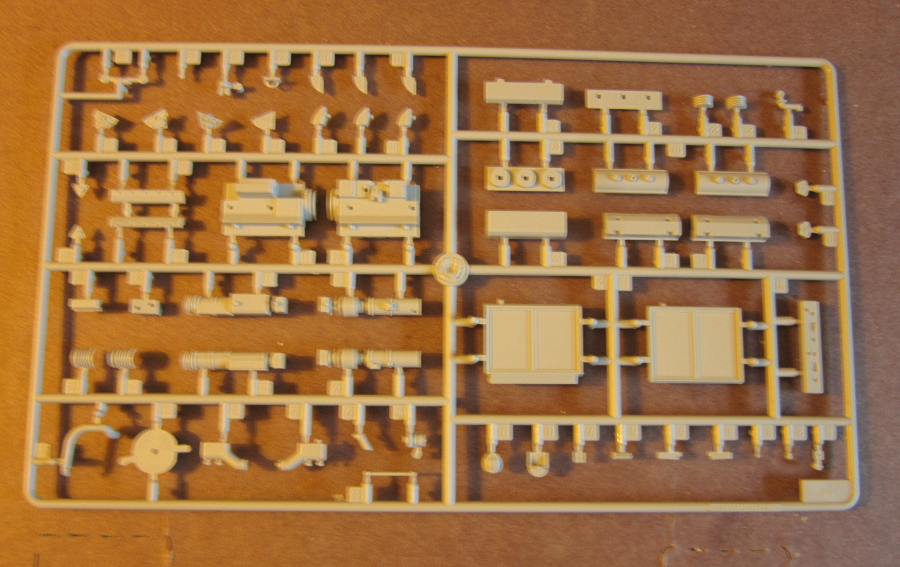 ​Then there are the light-gray hull tub and hull roof parts.

​There are 2 PE frets in the kit. They hold tons of parts such as fender supports and brackets, ammo bins, straps, etc. They are labeled A & B. 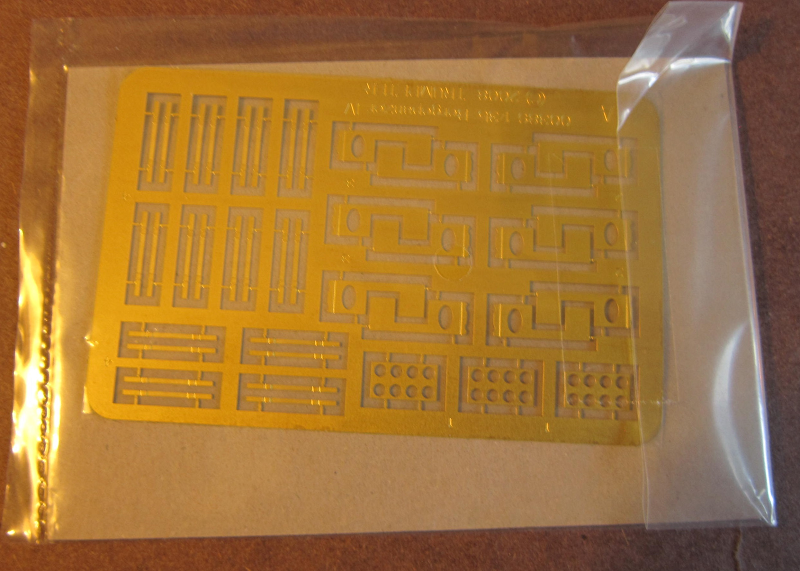 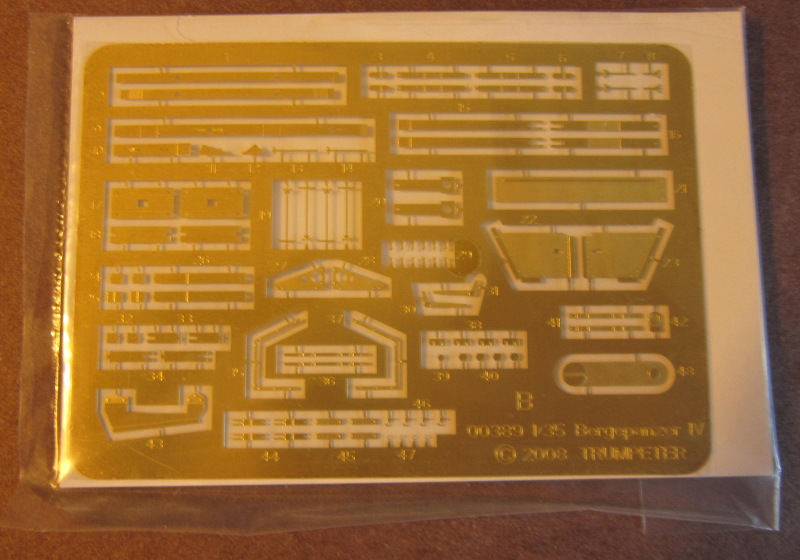 ​The length of brass metal chain and the decal sheet complete the kits contents. 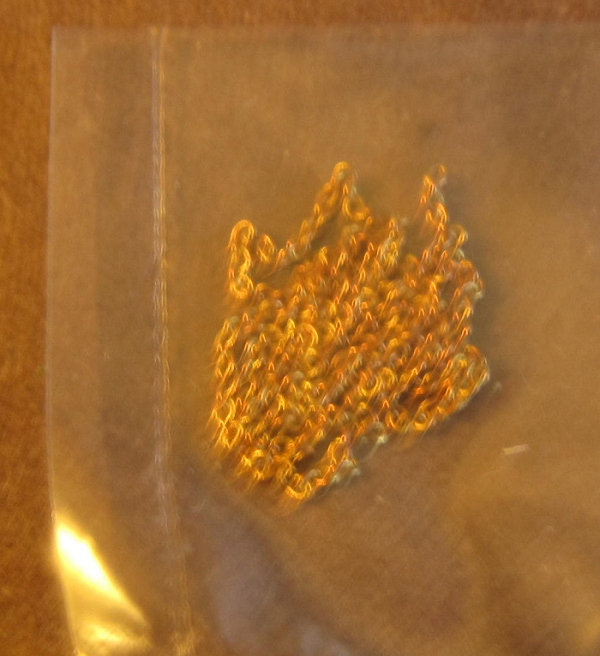 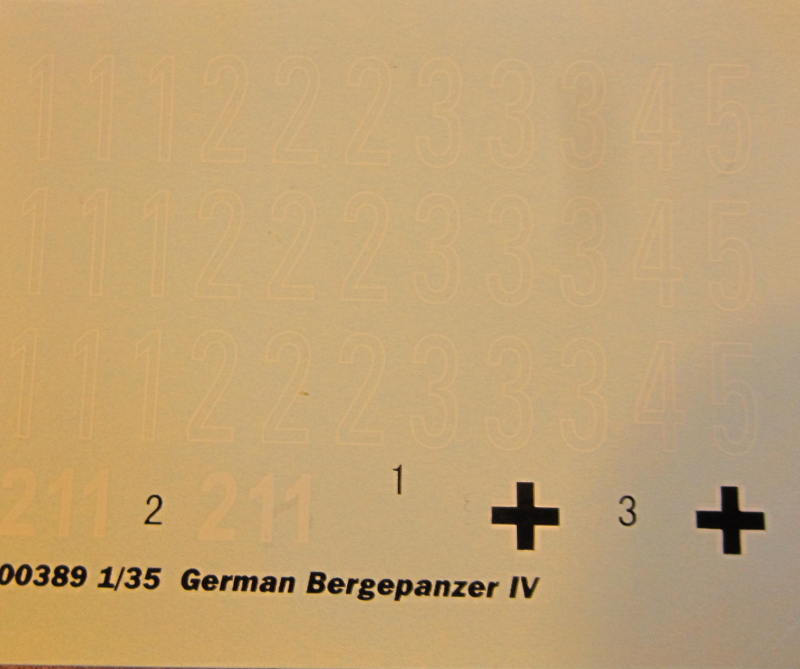 The hull roof and tub, the chain, the PE frets and the decal sheet are all packaged into that extra box that is attached to one end of the tray.

Detail inside and out on this model is great. However, there are no clear parts or crew figures. Crew figures on a rig like this would have been nice to have been included.