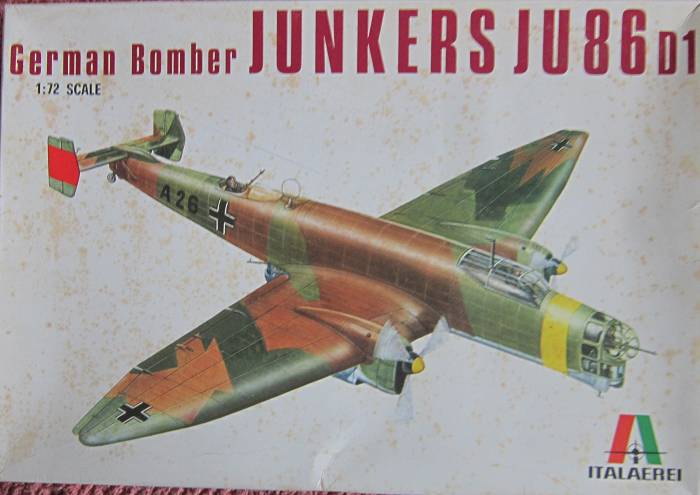 My kit has a copyright date of 1976. I paid $5.90 for my kit back then, according to the price sticker still on the box. The kit is shown on the internet for sale for a cheap $5.00 by one person.
HISTORY:

The Junkers Ju 86 was a German monoplane bomber and civilian airliner designed in the early 1930's, and employed by various air forces on both sides during World War II. The civilian model Ju 86B could carry ten passengers. Two were delivered to Swissair and five to Deutsche Luft Hansa. In addition a single civilian Ju 86Z was delivered to Sweden's AB Aerotransport.

In 1934, a specification for a modern twin-engine aircraft, capable of operating both as a high speed airliner for the German airline Luft Hansa and as a medium bomber for the nascent Luftwaffe, was issued to both Junkers and Heinkel. Five prototypes were ordered from each company; the Junkers Ju 86 and Heinkel He 111.

Junkers' design was a low-winged twin engine monoplane, of all-metal stressed skin construction. Unlike most of Junkers' previous designs, it discarded the typical corrugated skinning in favor of smooth metal skinning which helped to reduce drag. The craft was fitted with a narrow track retractable-main gear conventional undercarriage with a fixed tail wheel, and twin fins and rudders.

It was intended to be powered by Junkers Jumo 205 diesel engines, which although heavy, gave better fuel consumption than conventional petrol engines.
The distinctive Junkers-utilized doppelflügel control surfaces on the Ju 86's wing, much as the Ju 52 always used, were hinged below the wing's trailing edge, with the outboard section on each side functioning as an aileron, and the inner section functioning as a wing flap.

The bomber aircraft had a crew of four; a pilot, navigator, radio operator/bombardier and gunner. Defensive armament consisted of three machine guns, situated at the nose; at a dorsal position; and within a retractable ventral position.

Bombs were carried vertically in four fuselage cells behind the cockpit. The airliner version replaced the bomb cells with seating for ten passengers, with fuel tanks being moved from the fuselage to the wings.

The first prototype Ju 86, the Ju 86ab1 in bomber configuration, fitted with Siemens SAM 22 radial engines as airworthy Jumo 205's were unavailable, flew on 4 November 1934, with the second prototype, also a bomber, flying in January 1935.

The third Ju 86, the first civil prototype, flew on 4 April 1935. Production of pre-series military and civil aircraft started in late 1935, with full production of the Ju 86A-1 bomber commencing in April 1936. Production quickly switched to the improved Ju 86D with a modified tail cone to improve stability.

Early use of the Jumo-powered Ju 86 bomber in the Spanish Civil War showed that it was inferior to the He 111, with the diesel engines being unsuitable for rough treatment during combat; and production plans were cut back.

One Ju 86 had already been converted to use radial engines as a test bed for possible export versions, and this showed much improved reliability. Production switched to a version powered by the BMW 132 engine, the Ju 86E, production continuing until 1938.

Civil variants, introduced in 1936, were designated Ju 86Z of three different models. The Jumo-engined Ju 86Z-1 (corresponding to the former B-0 or C-1) was sold to Swissair (one), Airlines of Australia (one), and LAN-Chile (three); the BMW 132H-powered Ju 86Z-2 was sold to DLH (two) and the para-military Manchukuo Air Transport (five or more).

The Pratt & Whitney R-1690 Hornet-engine Z-7, delivered to AB Aerotransport (ABA) of Sweden (one, for use as a mail carrier), Lloyd Aéreo Boliviano (three), and South African Airways - SAA - (17). The ABA aircraft was later transferred to the Swedish Air Force, with which it served, under the designation Tp 9, until 1958.

South African Airways' original intention was to have its Ju 86s powered by 745 hp Rolls-Royce Kestrels. Six aircraft for SAA, flown with these engines, were refitted with Hornets before delivery, and the remainder were also Hornet-powered.

The Ju 86K was an export model, also built under license in Sweden by Saab as the B 3 with (905 hp) Bristol Mercury XIX radial engines. Several aircraft remained in service with the Swedish Air Force until 1958. A few were converted to SIGINT platforms.

Italaerei (now spelled Italeri) is an old prolific model company based in Italy. They manufacture all manner of model subjects in the popular scales.

This kit came in a taped-shut tray and lid type box.

The box art shows a Ju-86D-1 posed against an all white background. Similar to how Tamiya does the majority of their box arts also. My box has water stains on it, due to a moisture problem I had in my basement years ago where the kit was stored.

It is in a splinter pattern of 2 shades of green and brown over a pale-blue undercarriage. It has a red and yellow spinner, a yellow band around the nose and a black fuselage code A26 +. It has a wide red horizontal band on the rudder with a white circle with a black swastika on it.

The kit holds 2 dark-green trees and a clear tree in a sealed clear cello bag, the decal sheet and instructions.

The instructions consist of a single-sheet that accordion-foldes out into 6 pages in 6 1/2" x 13 1/4" page format.

Page 1 has the history of the Ju-86D-1 in Italian, English and German.

Page 3 & 4 have 5 un-numbered assembly steps, over the history of the aircraft in French.

Page 5 & 6 is the schemes illustrations.

1. A Luftwaffe Ju-86D-1 in box art colors with red fuselage code 42+A26. The 42 and 26 are repeated below the wings. It has a wide red horizontal band on the rudder with a white circle with a black swastika on it.

2. A Legion Condor Ju-86D-1 with Spanish Civil War marks in the box art color scheme with red fuselage code 26 black solid circle red 1. Wing roundels are solid black with white X's on them. The rudders are all white with black X's across them.

Trees are not alphabetized or have any part number tabs next to the parts on them. Bad move Italaerei ! 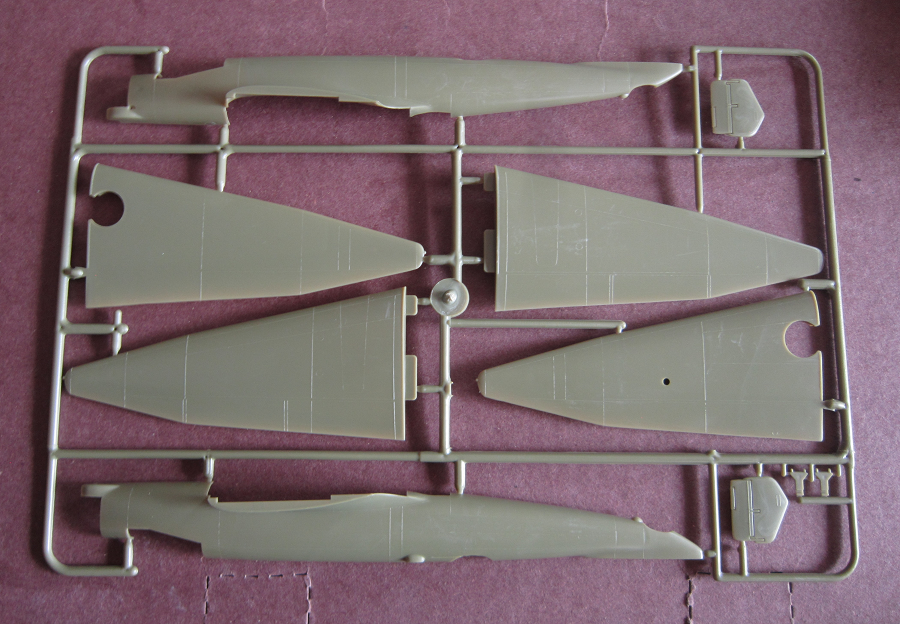 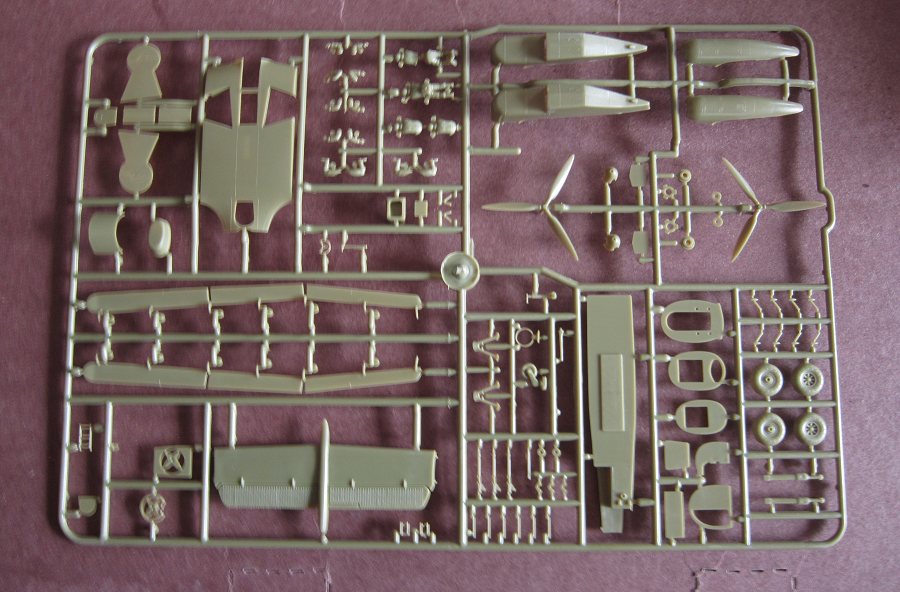 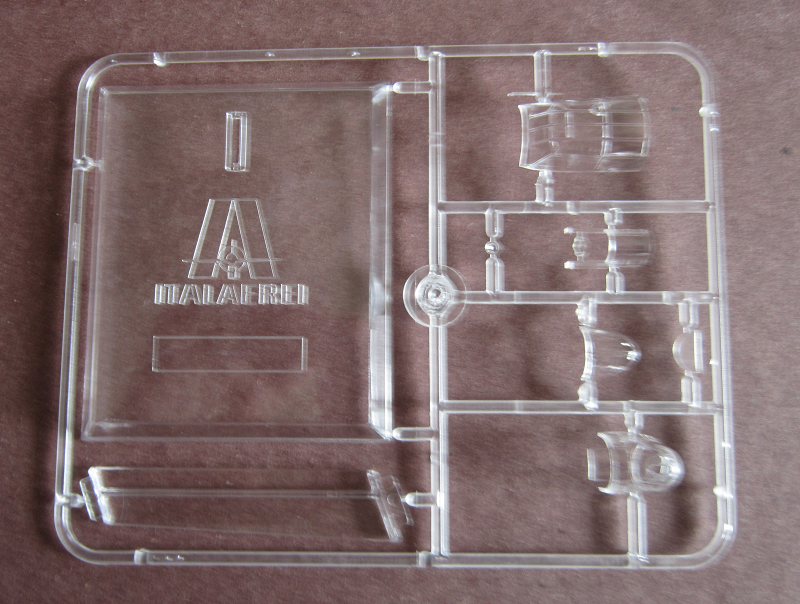 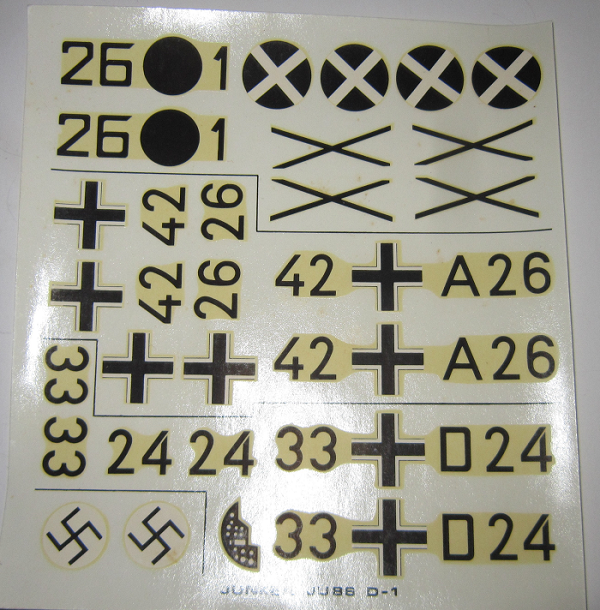 ​Kit has nice raised detail. All flaps except for the dive ones are molded solid.
​Recommended.