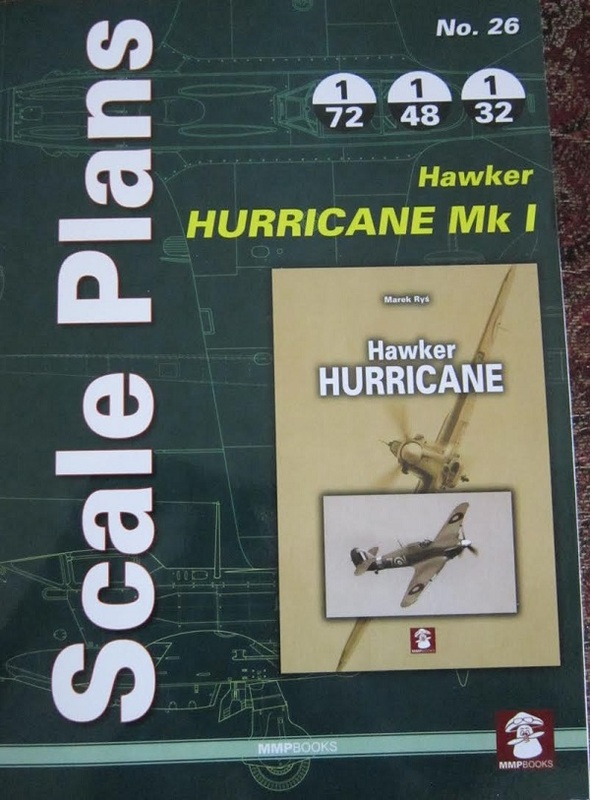 Review of Scale Plans No. 26

The first Mk I production machines were ready fairly quickly, with deliveries starting in December 1937. These early aircraft featured fabric-covered wings, and a wooden, two-bladed, fixed-pitch propeller. Initially the tail wheel was designed to be retractable; early on it was discovered that the Hurricane needed a larger rudder area to improve the control characteristics during a spin. To this end the lower part of the rudder was extended and a distinctive ventral "keel" was added to the rear fuselage. The tail wheel was now fixed.

Early Hurricanes lacked armor or self-sealing tanks. They used "ring and bead" gun sights, with the ring being mounted above the instrument panel and the bead mounted on a post above the engine cowling. The standard GM2 reflector gun sight was introduced in mid-1939, although many Hurricanes retained the "bead". Fuel capacity was 97 gal (441 l) in two fuel tanks, each of 34.5 gal (157 l) in the wing center-section, between the spars; the fuel was pumped from these into a reserve gravity-feed tank which held an additional 28 gal (127 l) in the forward fuselage, just ahead of the cockpit. This was the main fuel feed to the engine. The 7 gal (32 l) oil tank was built into the forward, port center section. Early "K"  Mk Is were powered by the 1,029 hp (768 kW) Rolls-Royce Merlin C engine; from the "L" serial numbers the later Merlin II of 1,030 hp (768 kW) was installed. The main coolant radiator was housed in a fairing under the rear wing center-section; the oil cooler was also incorporated into the main radiator.

The aircraft handling qualities during take-off and landings were excellent due to a wide-track undercarriage with relatively wide low-pressure tires. Because of this wide, stable platform the Hurricane was an easier aircraft to land, with less fear of nose-overs or "ground-loops" than its RAF Fighter Command counterpart the Supermarine Spitfire. During its operational life the Hurricane was able to operate from all sorts of adverse airfield surfaces with ease.

In flight the large, thick wing meant that the fighter proved to be a stable gun platform. It was armed with eight .303 in (7.7 mm) Browning machine guns. The armament was arranged in two lots of four in large gun bays incorporated into the outer wing panels. In 1937 this firepower was enough to outgun the early marks of German Messerschmitt Bf 109, which were equipped with only four light machine guns. By the time of the Battle of Britain, however, it was recognized that this relatively small-caliber armament was inadequate; during the Battle of Britain it was relatively common for Luftwaffe aircraft to survive numerous hits from .303 in (7.7 mm) bullets and still return safely to base. Later versions of the Hurricane were equipped with a more powerful arms package, initially 12 .303 in (7.7 mm) Brownings, and later four 20 mm (.79 in) Hispano cannon. Hurricanes built under license by SABCA in Belgium featured four 12.7 mm (.50 in) FN-Browning guns instead of the .303 inch armament.

Mushroom Model Publications is based in the U.K. All their books are printed in Sandomierz, Poland by their associate Stratus. Stratus does their own line of books in both English and Polish. This scale plan set is in English.

Highly recommended. This set will be of great value to modelers of the Hurricane Mk. I and of interest to aviation enhusiasts.

I want to thank Dr. Roger Wallsgrove, Editor-in-Chief of MMP and the folks at Casemate that sent me this review sample.

Casemate is the N. American distributor of MMP books.