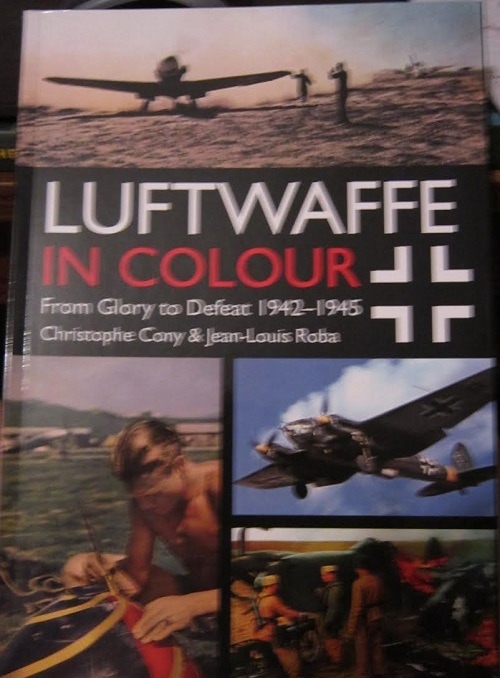 
Casemate Publishing is based in Pennsylvania. They distribut a lot of other publishers including books of their own. This is one of theirs.

The authors of this book, Jean-Louis Roba lives in Belgium and Christophe Cony lives in France.

They are well-respected World War II aviation historians who have worked together on numerous books and magazine articles for the leading French military aviation publishers, Lela Presse.


The cover has several color photos on it that are repeated inside the book too.

A Bf-109 taking off from a dirt airfield.
A ground-crewman painting a yellow spiral on a popeller spinner.
A He-111 taking off.
Afrika Korps troops examining a crashed P-38 Lightning.

The back cover of the book has more color  photos on it:
Three ground-crewmen sitting on the wing of a Fw-190.
A ground-crewman in a winter coat by a Bf-109G-2.
A ground-crewman launching a weather balloon.
A close up of the logo "Christl". Personal emblem of Oblt Gerhard Barkhorn with 4/JG53.
Two Me-110's flying over water.

All these photo also are repeated inside the book.

90% of the photos in the book are in full color. The balance are black and white.

The front and back covers of the book have a folded flap on them.

On the back flap there are color cover arts of 4 other books that Casemate does:

Luftwaffe in Colour, The Victory Years, 1939-1942 (a companion volume to this book)
Vanished Hero, The Life, War & Mysterious Disappearance of America's WWII Strafing King.
The Battle of Britain.
Three in Thirteen, The Story of a Mosquito Night-fighter Ace.

PHOTOS IN THE BOOK:

This is one profusely illustrated book with rare wartime color photos never seen before. All photos have thorough captions under them explaining things in the photos in great detail

There is a loose card inside the book to use to sign-up for Casemate U.K.'s mailing list and a chance to win 150 pounds worth of books.

This book will greatly appeal to both modelers and aircraft historians.

I sincerely want to thank the folks at Casemate that sent me this sample. All their books and books by other publishers that they distribute can be seen on their site at:
www.casematepublishers.com