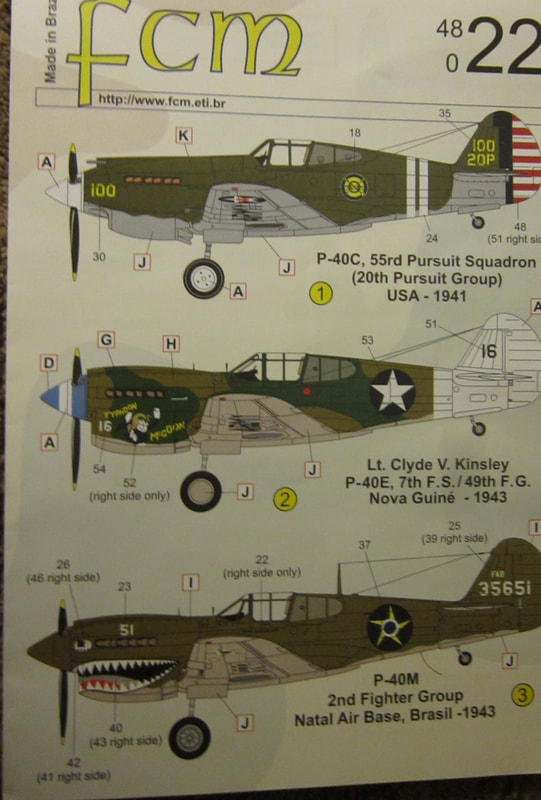 The P-40N was the most produced variant of the Warhawk, with 5220 aircraft built.

In an attempt to increase performance, Curtiss lightened the P-40M by introducing a lightweight structure, lighter, smaller diameter undercarriage wheels, removing two of the guns, and installing aluminum radiators and oil coolers. Head armor was also re-introduced. With these changes, the P-40N-1 (Model 87V) was the fastest production Warhawk, reaching a speed of 378 mph below 12,000 feet.

Starting with the P-40N-5 (Model 87W), the canopy was redesigned to give the pilot a better field of vision. This variant also reverted to the six gun wing and one rack was added to each wing, these could carry either bombs or drop tanks.

This set comes in a self-sealing clear cello bag.

It contains the instructions and the decal sheet. 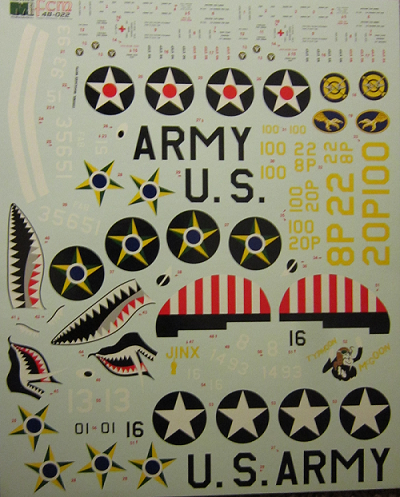 ​The instructions consist of a single-sheet that 8” x 15 ½” format and printed in color on both sides and folded 3 times to fit the bag.

The face side has a color and marking guide, with 7 side profiles and a top and bottom view.

The 1st profile is of a P-40E with the Brazilian Air Force, 1° Grupo de Monomotores, Naval Air Base, Brazil -1942. It is in a wave pattern of dark-green and dark-earth, above a sky-blue undercarriage. It has a black 01 on its rudder side, Belgian A.F. star insignia in the usual 6 locations, a red and white spinner and a shark mouth under its nose. It’s top and bottom views are also shown. 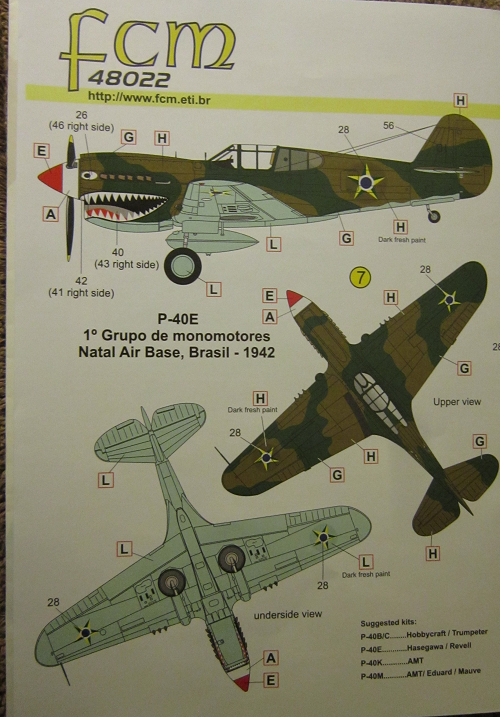 ​The 2nd profile is of a P-40C with the U.S. Air Force 33rd Pursuit Squadron, 1941. It is olive-green above a light grey undercarriage, with a red spinner. The U.S. insignias are a blue circle with a white star that has a red circle in the center above and below the wings. It has black, white and red stripes on the rudder, with yellow no. 22 over 6P. There is a logo on the side of the fuselage of a blue oval outlined in yellow with a yellow eagle’s claw on it. Under the wings is black U.S. Army. 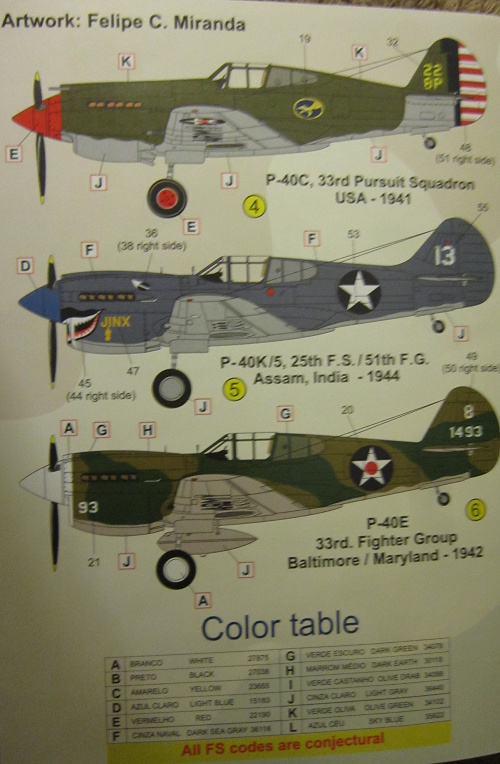 ​The 5th profile is a P-40C with the U.S. Air Force 55th Pursuit Squadron, 20th Persuit Group -1941. It is olive green over a light-grey undercarriage. It has 2 white fuselage bands and a white spinner. A yellow no. 100 is on the sides of its nose and a yellow 100 over 20P on the rudder. The rudder flap has black, white and red stripes on it. The national star insignia is the blue circle with white star with the red circle in the center. These are only above and below the wings with the black U.S. Army.

The 6th profile is a P-40E flown by Lt. Clyde V. Kinsley, U.S. Air Force 7th Fighter Squadron, 49th Fighter Group, Nova Guine -1943. It is in a wave pattern of dark-green and dark-earth over a light-grey undercarriage. It has an all-white tail, with black no, 16 on the rudder. It has a black, white and blue spinner. There is a small white 16 on the side of the nose, followed by a logo of a white monkey’s head wearing a leather pilot’s cap with the yellow words “Typhoon McGoon” around it. It just has the national star insignia on the sides of the fuselage that is a blue circle with the white star  on it. Under the wings is just the black U.S. Army.

The 7th profile is a P-40M with the Brazilian Air Force 2nd Fighter Group, Natal Air Base, Brazil. It is olive-green over a light-grey undercarriage, with Brazilian stars on the sides of the fuselage. It has a shark mouth on the nose, with a white no. 51 above it and a white serial no. FAB over 35651 on the rudder. 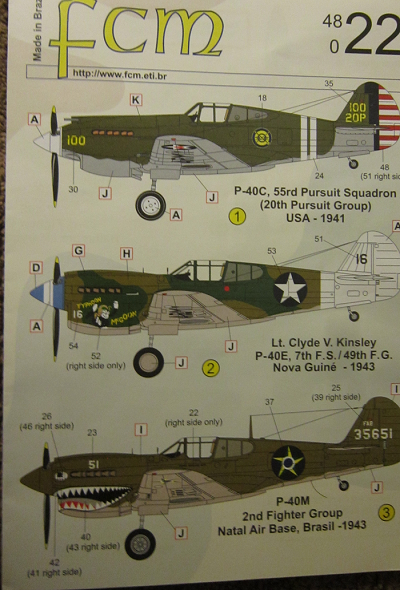 A suggested color listing is provided, which includes the color’s Federal Standard numbers. However, it says that these numbers are conjectural.
​The reverse side of the instructions shows a bottom view that shows the marking for some of the U.S.  P-40 variants. (already described above).

1.   The P-40E with the U.S. Air Force 33rd Fighter Group.It shows the national insignia above just the left wing.

2.   Lt. Kingsley’s P-40K, also with the national insignia above just the left wing.

5.   The U.S. Air Force P-40C with the 33rd Pursuit Group, also showing the national insignia just on top of the left wing, with yellow serial no BP22 beside it.
​The right end of the instructions has a 4-view line drawing to use for placement of the stencil markings. 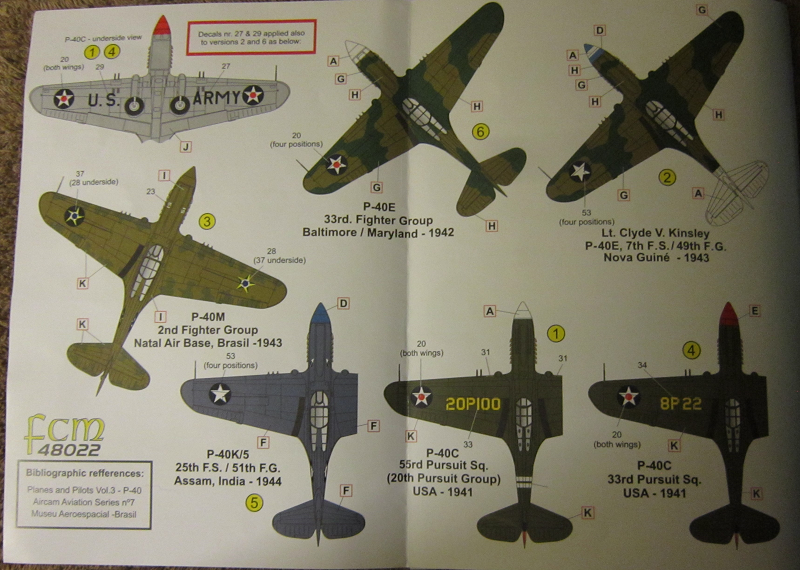 ​Highly recommended. This set will be of great interest to modelers planning to do a P-40 kit in 1/48th scale and to aircraft historians alike.

The sheet was made in Brazil and printed by Micro Scale.