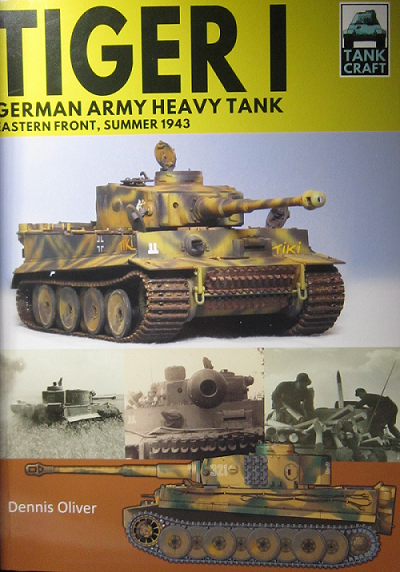 Book Review of Tiger I

The Tiger I tank, probably the most famous German armored vehicle of WWII, might have been a war-winner, breakthrough weapon if it had been produced in sufficient numbers and if it had been introduced earlier on the Eastern Front, before the balance of strength had tipped towards the Soviet Union.

At the Battle of Kursk, there were not enough Tigers to make a decisive difference and therefore the Tiger was forced to play a mainly defensive role as the Wehrmacht struggled to withstand the advances of the Red Army, It is this period in the Tiger tank’s short history that Dennis Oliver concentrates on in this, the third book on the Tiger in the Tank Craft series.

He uses 200 color and black and white archive photos and extensively researched color illustrations to examine the tanks and units of the German army’s heavy panzer battalions. A large part of the book showcases available model kits and after-market products, complemented by a gallery of beautifully constructed and painted models in various scales.

Technical details as well as modifications introduced during production and in the field are also examined providing everything the modeler needs to recreate an accurate representation of the tigers of 1943.

Pen & Sword Ltd. Books is located in the UK.

The cover art shows at the top a color photo of the DML Dragon 1/35th scale Tiger I kit, built by modeler Naomasa Dairaku, with 13 color walk around type photos in his build review in the book, along with a wartime photo  of the actual Tiger, who’s scheme he recreates. It is in a base of sand yellow, with dark green and red brown bands and a white division mark on the left side of its none and a yellow “TIKI” on the right side of the nose and forward end of the sides.

Below this are 3 wartime black and white photos of Tiger I’s. The one on the left is crossing a grassy field. The one in the center is a head on shot and the one on the right shows crewmembers atop a Tiger I.

Below these black and white photos there is a color side profile of a Tiger I Ausf. E, that is repeated inside the book. It is in bands of earth yellow, red brown and dark green, with a white outlined number 321 on the sides of the turret. It was with Schwere Panzer-Abteilung 505, Summer 1943.

The book contains 51 black and white photos of Tigers and their crews, 2 maps, 17 unit consistency charts, illustrations of a hat and chest uniform insignia, 20 color side profiles are of Ausf. E Tigers and one is of a Ausf. F.

There is a photo of a Panzer assault metal badge and SS collar insignia.

The built models section begins with:

The AFV Club brand 148th scale Tiger I, built by Ralph Riese, with 7 color walk around photos of it being built.

The DML Dragon 1/35th scale Tiger I, that is at the top of the cover (already described above) with 13 color walk-around type photos of it being built.

The DML Dragon 1/35th scale Tiger I, built by Luciano Rodriguez, with 13 color walk-around type photos f it being built and a illustration of a postcard about the Tiger.

Two color photos of DML Dragon 1/35th scale box arts and 5 color walk-around photos of the model made up.

A color photo of Trumpeter/Hobby Boss brand Tiger box art and the turret made up.

Three different color box arts of Rye Field brand’s Tiger and one shot of the model made up.

Revell and Airfix 1/72nd models with 3 color photos of the models made up.

Zvezda 1/72nd scale Tiger’s color box art and the model made up.

There are 2 black and white side view illustrations of Tiger  I early production variant.

The last page of the book has 15 black and white cover arts of other Pen & Sword AFV books and a listing of 14 more that says 5 of these 14 will be forthcoming in the future.

This is a neat book and a MUST HAVE for modelers planning a build of a Tiger I. It will be also of interest to military historians alike.

I want to thank Casemate Publishers, the North American distributor for Pen & Sword Ltd. Books for this review sample. All Pen & Sword titles can be seen on Casemate’s website at:
www.casematepublishers.com