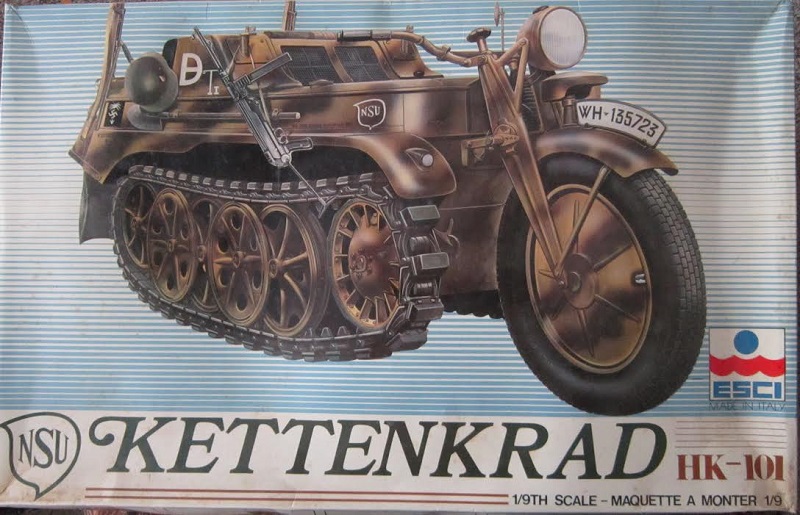 HISTORY:
The SdKfz 2, better known as the Kleines Kettenkraftrad HK 101 or Kettenkrad for short (Ketten = chain/tracks, krad = military abbreviation of the German wordKraftrad, the administrative German term for motorcycle), started its life as a light tractor for airborne troops. The vehicle was designed to be delivered by Junkers Ju 52 aircraft, though not by parachute. The vehicle had the advantage of being the only gun tractor small enough to fit inside the hold of the Ju 52, and was the lightest mass-produced German military vehicle to use the complex Schachtellaufwerk overlapped and interleaved road wheels used on almost all German military half-track vehicles of World War II.

Steering the Kettenkrad was accomplished by turning the handlebars: Up to a certain point, only the front wheel would steer the vehicle. A motion of the handlebars beyond that point would engage the track brakes to help make turns sharper. It was also possible to run the vehicle without the front wheel installed and this was recommended in extreme off-road conditions where speed would be kept low.

The SdKfz 2 was designed and built by the NSU Werke AG at Neckarsulm, Germany. First designed and patented in June 1939, it was first used in the invasion of the Soviet Union in 1941.[2] Later in the war Stoewer from Stettin also produced Kettenkrads under license, accounting for about 10% of the total production.[

Most Kettenkrads saw service on the Eastern Front, where they were used to lay communication cables, pull heavy loads and carry soldiers through the deep Russian mud. Later in the war, Kettenkrads were used as runway tugs for aircraft, especially for the Me 262 jet fighters. In order to save aviation fuel, the aircraft would be towed to the runway, rather than taxiing under their own power.

The vehicle was also used in the North African theater and on the Western Front.

The Kettenkrad came with a special trailer (Sd.Anh.1) that could be attached to it to improve its cargo capacity.

Being a tracked vehicle, the Kettenkrad could climb up to 24° in sand and even more on hard ground, as long as the driver had the courage for it.

Only two significant sub-variations of the Kettenkrad were constructed. Production of the vehicle was stopped in 1944, at which time 8,345 had been built. After the war, production resumed at NSU. Around 550 Kettenkräder were built for agricultural use, with production ending in 1948 (some sources say 1949).

Esci was a prolific model company based in Italy. They made all manner of model subjects in the popular scales. For a time their kits were sold by Ertl in Dyresville, Iowa and later by DML and Revell of Germany too. I don’t believe Esci exits any more.

It came in a shrink wrapped tray and lid type box.

The box art shows a Kettenkrad in a base of sand yellow with bands of red brown camouflage. It is a vehicle with the 21st Panzer Div., North Africa. It has a black square at the extreme rear of it’s side that has the Afrika Korps white palm tree with swastika on it. To the right of this is the 21st’s logo a white right half of a circle divided in half with a horizontal bar and a large letter “T” with a small letter “I” to the right of it. A white NSU logo is on the forward end of the sides and the white license plate on the front fender has the black number WH-135723 on it. This license number is not included on the decal sheet in the kit however.

There are two 98K carbines in mounts on the rear of the Kettenkrad, a steel helmet is hung over the side and a MP40 machine-pistol is hung from it’s shoulder strap over a post to the side. The Kettenkrad is posed against a background of blue and white horizontal thin barber stripes.

One side panel of the box has 4 color illustrations of the box arts of other 1/9th scale motorcycles that Esci marketed:

The other side panel continues with 4 more Esci box arts of AFV kits in 1/9th scale:

There is a off white colored vinyl 1/9th scale driver figure in the box. I only know that he is a DML mold, but how he got in this box is a mystery??? I cannot remember if some modeler gave me him as a gift years ago or what ??? He is divided into separate torso, lower body, arms and soft peaked field cap. At any rate a nice addition to this model or atop any of the other Esci 1/9th scale kits I have.

Page 1 of the instructions has a large black and white repeat of the box art with a one-paragraph history of the Kettenkrad to the right of it. Made in Italy is on one corner.

Page 2 and 3 have the parts trees illustrations.

Page 4 through 15 give a grand total of 20 assembly steps.

Under steps no. 1 & 2, there is a wartime black and white photo of 2 Kettenkrads passing a stone wall with an ocean seen behind it. The second Kettenkrad is pulling a wheeled trailer. No marking are visible on the Kettenkrad..

Another wartime black and white photo is shown in step no. 4. It is of a Kettenkrad fording a river. The driver is wearing a field-police gorget hung from a chain around his neck. No markings are visible on the Kettenkrad.

A third wartime black and white photo shows a Kettnkrad leading two trucks through deep mud. The second truck has a bunch of troops pushing it. The kettenkrad driver also wears a field-police gorget.

Each assembly step in the instructions is alphabetized for the purpose of following the letters as the sequence order of assembling the parts. There is also text telling you what color some of the parts should be painted in each step and any special things that have to be done….like not cementing something so it later moves. Very complete instructions.

The parts trees are NOT alphabetized, nor are they numbered with tabs next to the parts on the trees, like normally seen in model kits. However, on the parts trees illustrations and the assembly step drawings each part is numbered. Very odd. It makes for a lot of extra work to make sure you get the right parts for each assembly. Bad move Esci !!

Page 16 shows the markings on the decal sheet and tells what each is, but there is no illustration of a Kettenkrad showing just where on it these markings go. So you will have to wing it. Another bad move Esci !! There are 3 more black and white wartimes photos of Kettenkrads pulling various things and loaded with troops. Again, no markings are visible in any of these three photos.

Unit markings included on the decal sheet are:

The tan loose parts that are numbered 1 & 2 are the 2 hull side parts. 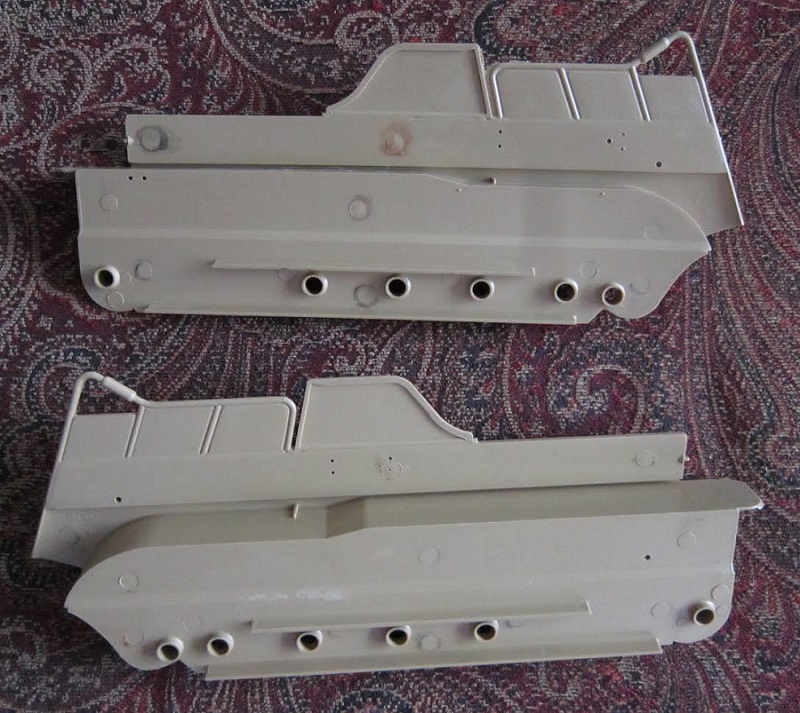 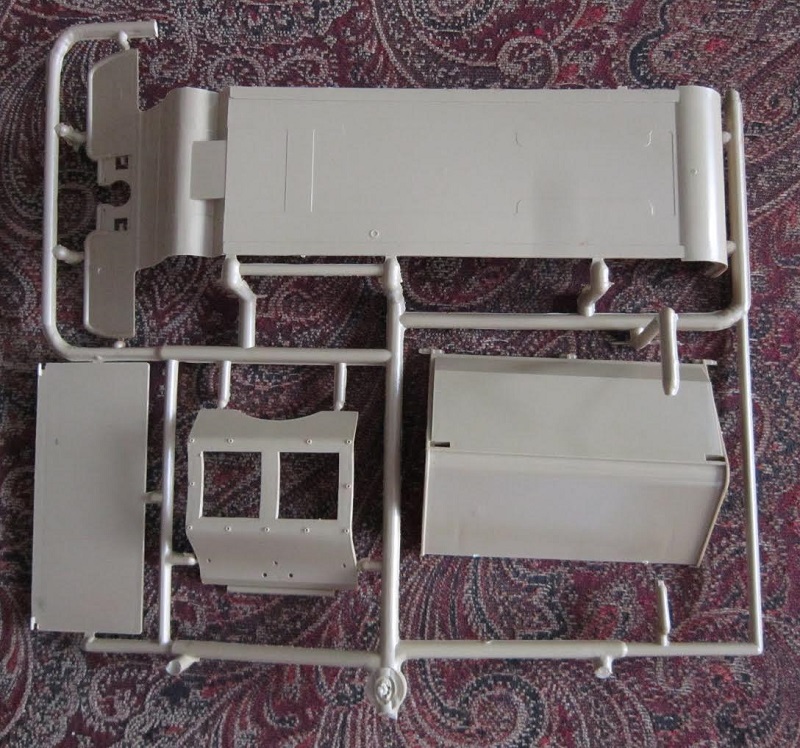 The black vinyl tree is numbered 7 to 18 and holds the seats and straps (19 parts). The tire has nice tread detail and letters molded onto the side walls. 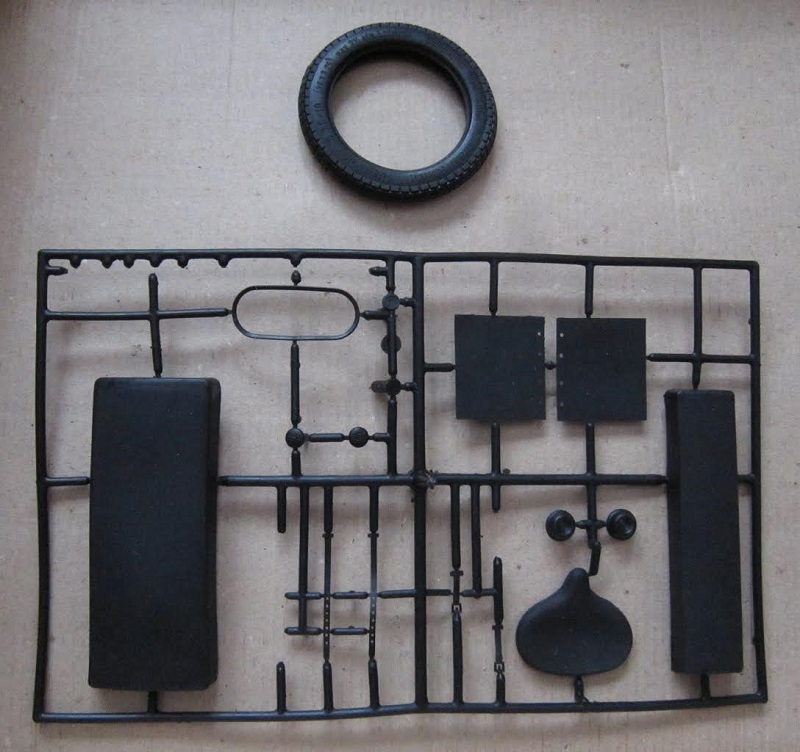 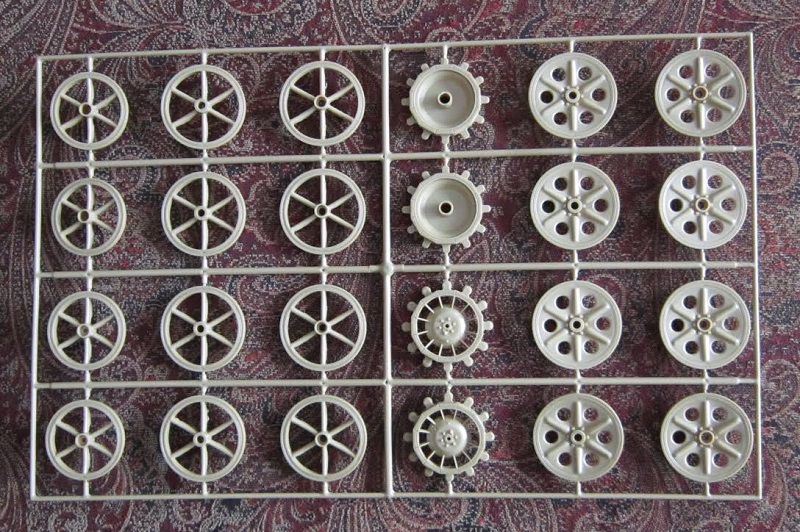 There are two identical grey trees numbered 27 & 28. They hold the individual track links (43 parts on each) 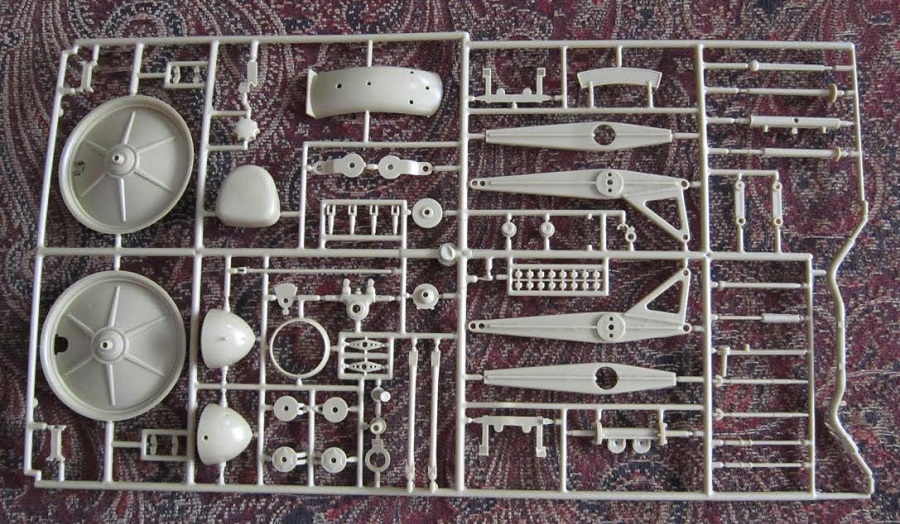 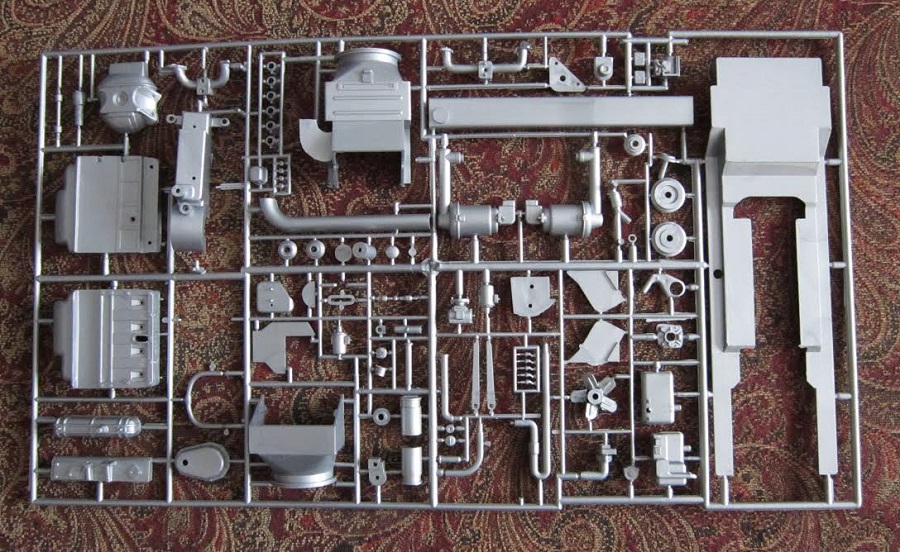 The tan tree numbered 152 to 181 holds suspension arms, side panels and the front hull part (64 parts) 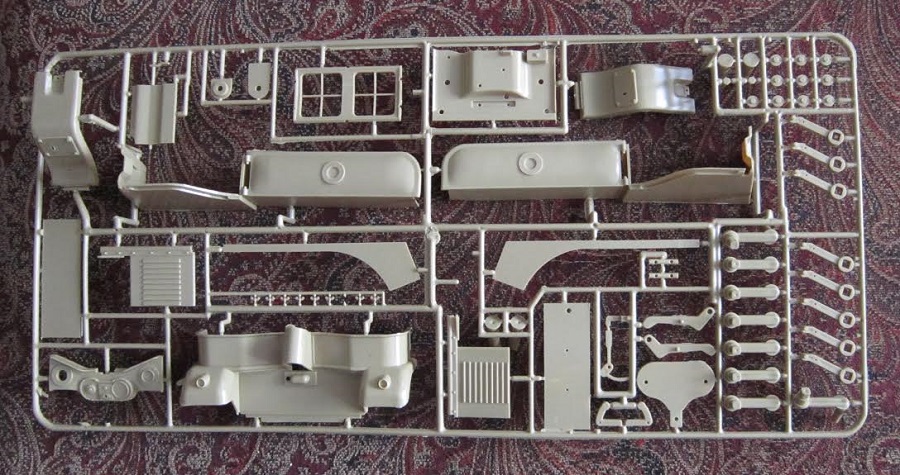 The tan tree numbered 182 to 254 holds: 3 steel helmets and their liners, a rolled tarp, an axe, a MP40 machine-pistol, a shovel, a tow cable, tools etc. (95 parts) These tools are excess, because they are never shown in the instructions as to where they get placed. 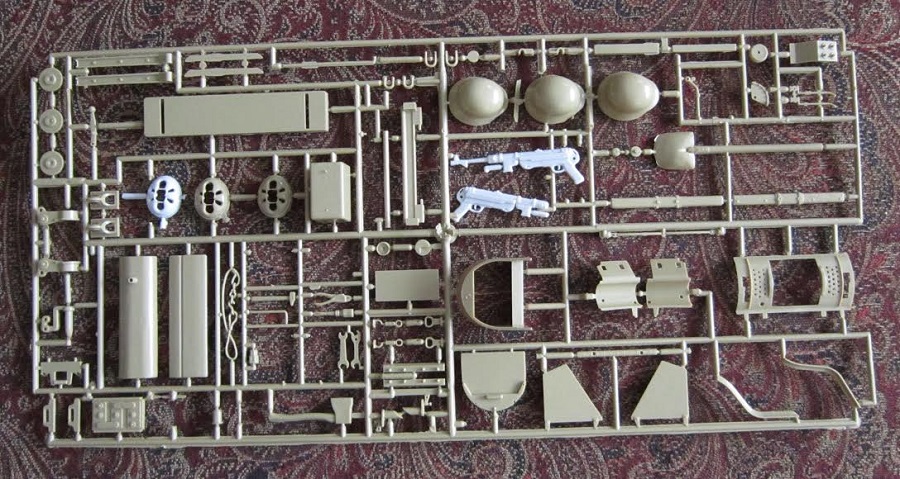 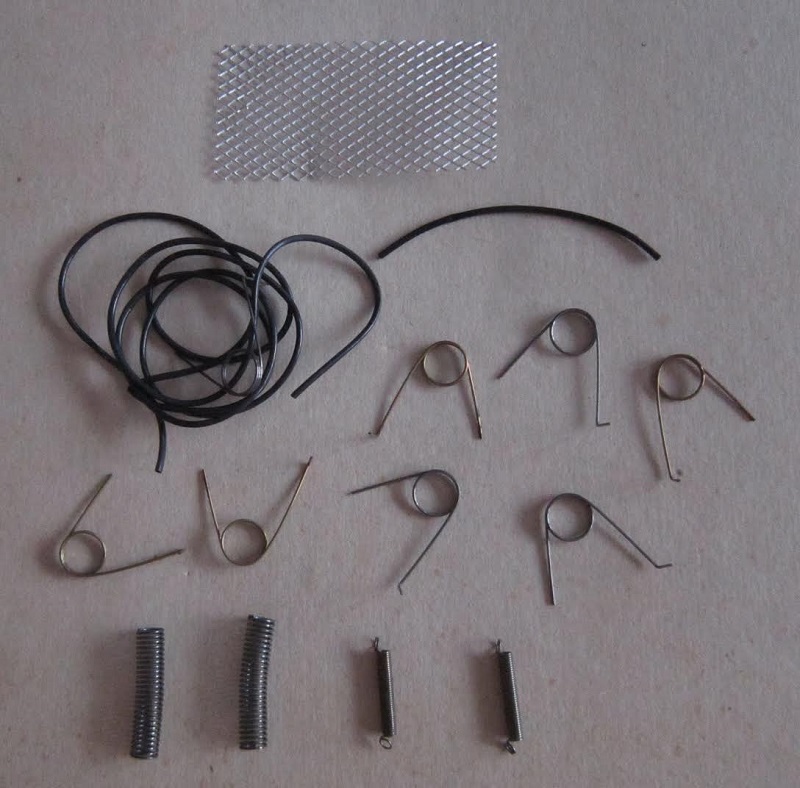 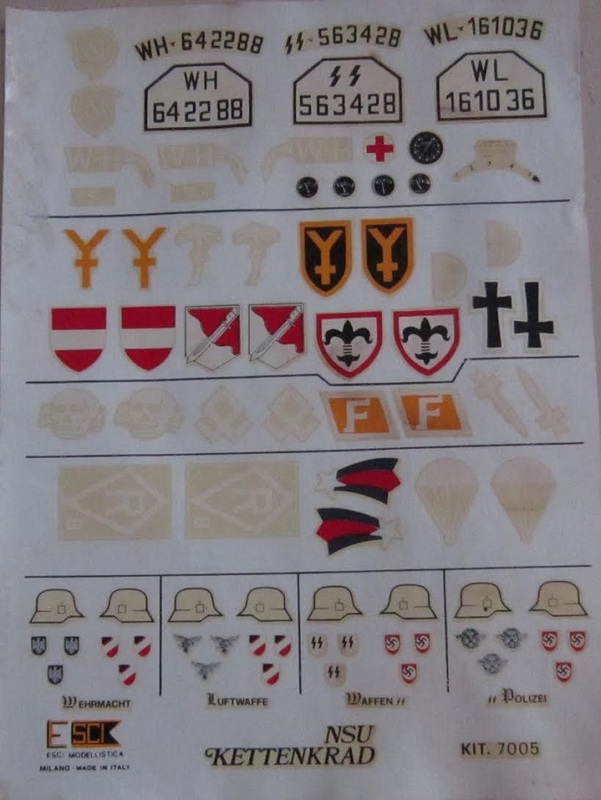 A nicely detailed driver figure is included in the kit. 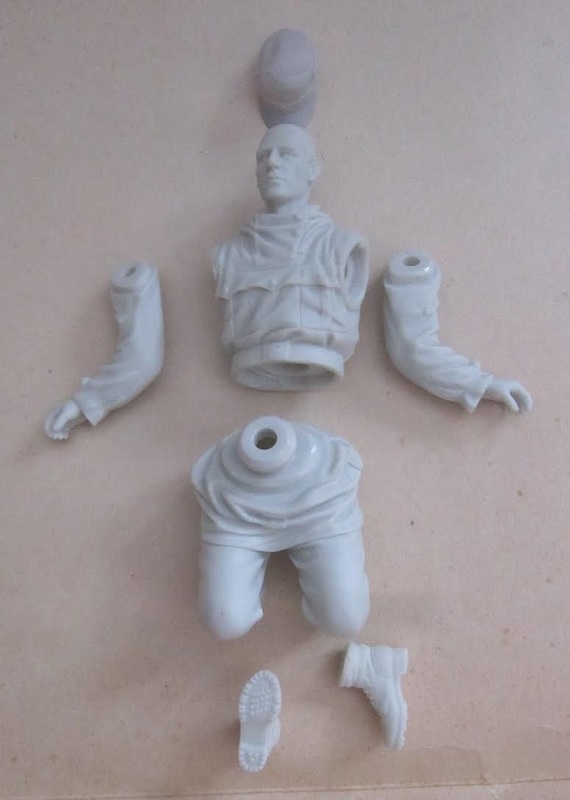 The finale item is the tree for the clear parts which includes the head lamp. 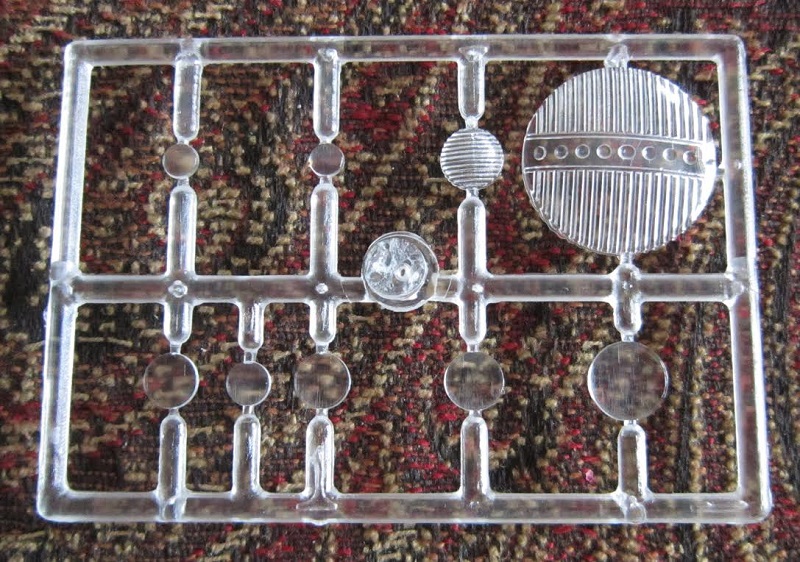 This is one very large and complex kit with hundreds of parts in it. It is definitely NOT for the novice modeler and is not a weekend project. It will really make up into a show-stopping model when finished.

I highly recommend it to modelers of advanced modeling skills.

This kit was courtesy of my walled years ago when I bought it from a vender at a IPMS contest I attended. I think this was back in the 70”s ?? When I got the kit home and looked inside I discovered there were a number of parts MISSING!! I contacted Esci in Italy by mail and asked them if I could purchase the parts that were missing. Over a month went by with no reply till the mail man arrived at my doorstep with a package from Esci. Inside it was a whole Kettenkrad kit with a letter in broken English that said “We are sorry that you had trouble with your kit. We apologize for it and here is a kit with our complements.” They apologized for something that was not caused by them, but caused by that unhonest vendor!!