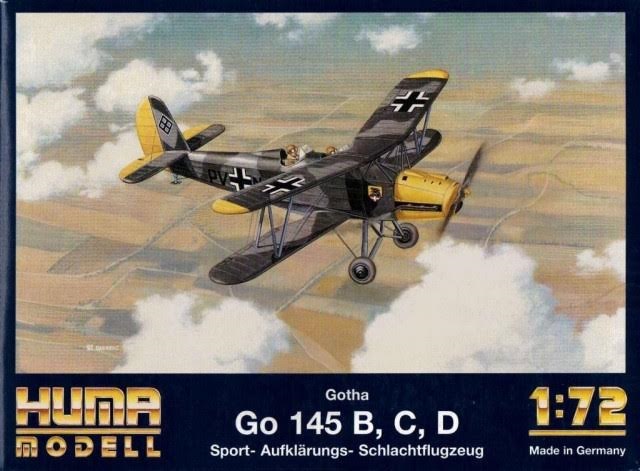 No Kit no. on this first release of the kit
By Ray Mehlberger

Out of production
HISTORY:

The Go 145 was developed under the direction of Dipl.-Ing. A. Kalkert in 1933/34, after he had taken over the design office of Gother Waggonfabrik.

This single-strut biplane of composite construction met all the requirements expected of an economical aircraft at that time, mainly due to its excellent design and the high workmanship standard of its builders. Thus, the Go 145 became one of Germany's most sucessful aircraft. The open tandem cockpit could accommodate a crew of two. The standard version had dual controls, but by removing the rear cockpit control stick and seat, sufficient space was available for the installation of a rearward firing machine gun or other special equipment.

Wereas, on the one hand the aircraft was especially suited for advanced pilot and observer training, it could also be used for other purposes such as:

From the autumn of 1942 on, the Go 145 was also used on the Eastern Front by the newly established night harassment squadrons...

All in all, a total of 12,000 Go 145's were said to have been produced under license by various German companies as well as by companies in Turkey and Spain.

Go 145 A - Two-seater with open cockpits.
Go 145 B - Two seater with gunner position for gunner training.
Go 145 C - Multi-role aircraft enabling the carraige of bombs (ETC 50) or a radio system in addition to the machine gun. It was aicraft of this type that were employed by night harassment squadrons.
Go 145 D - Two-seater with closed canopy and spatted wheels.
​CONSTRUCTION DETAILS:

Fuselage: Steel tube construction. To improve aerodynamic smoothness, streamline fairings were added. The seats in tandem arrangement could be adjusted during flight. The standard version was normally equipped with dual controls. When rear seat and control seat were removed, the space gained was sufficient to install special equipment. The engine was equipped with metal cowlings.

Engine: Standard version powered by Argus As 10c engine. Other air-cooled engines between 240 and 350 hp could also be employed.

My kit is the original issue that only came in a sealed clear cello bag attached to a baking card. Its copyrite date is 1993. Later in the 2000's it was re-released in a box. Both issues are out of production now.

Huma-Modell was a model company based in Germany. I think they only ever released limited-run aircraft kits and I think they are now out of business.
​WHAT'S IN THE BAG:

Inside the cello bag is one tan tree of parts, a clear parts tree, the decal sheet, instructions and a sheet showing marking schemes.

The lone parts tree holds all the parts for the aircraft. I will not try and name them all. (40 parts) 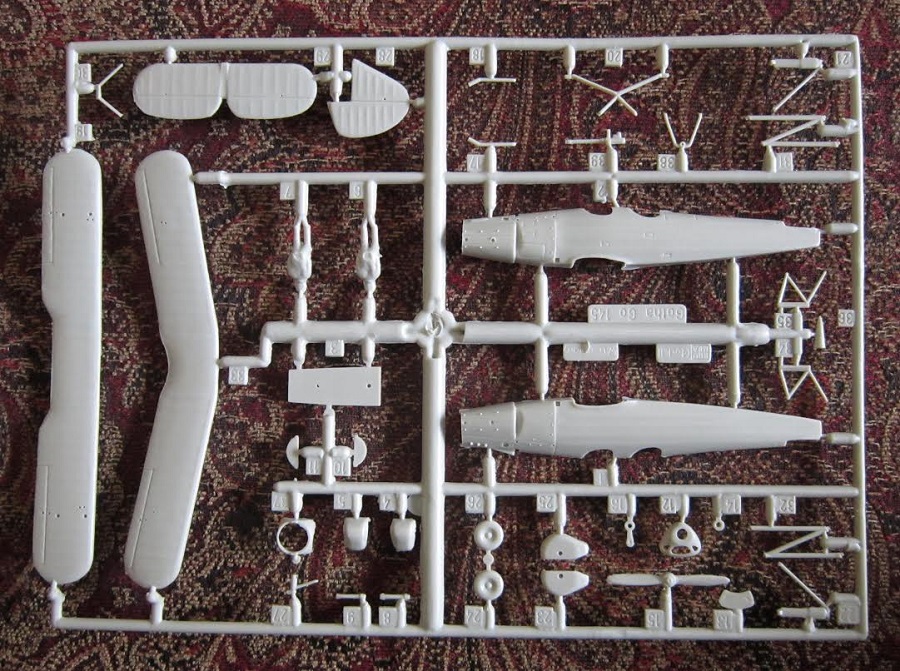 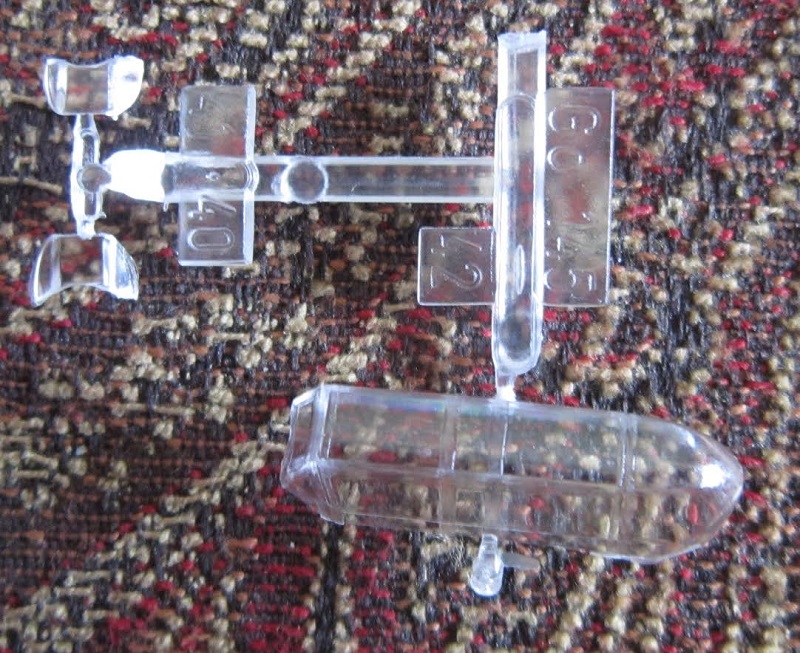 The decal sheet, instructions and the scheme sheet complete the kit's contents. 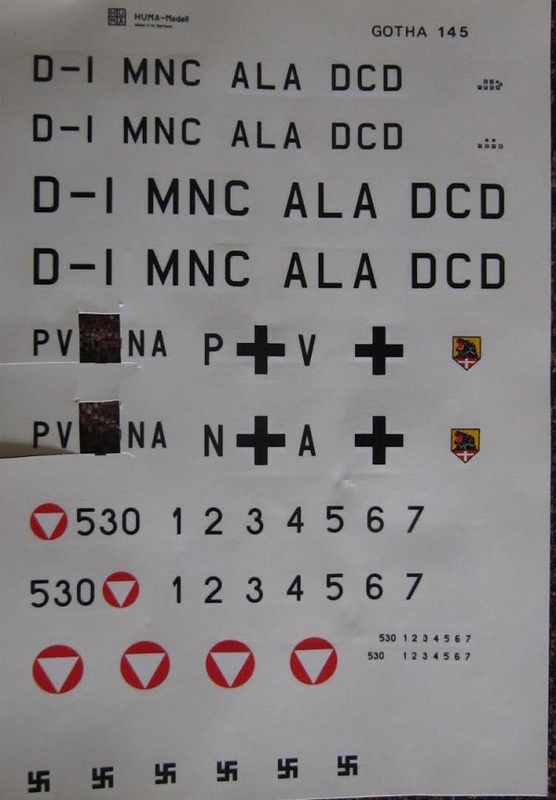 Page 1 of the instructions has a black and white illustration of the Go 145 flying above clouds.
It is in RLM grey 74 and RLM 75 grey wave pattern, over a RLM light-blue undercarraige. It has a yellow cowling, rudder and elevator flaps. A squadron logo of a yellow shield with a lion's head on it is on the sides of the nose. It has the black fuselage number of PV+NA. It is a Go 145c version. We are not told what the squadron is.

Below this is the history of the Go 145 in German.

Page 2 & 3 have 6 exploded assembly drawings, with instructions to do any one of the 4 versions.

There are no parts trees illustrations provided, but the tree and the drawings are numbered.
Page 4 has the history repeated in English and French.

The single sheet has a 3-view of the Go 145 illustrated atop the first page (already discribed above). 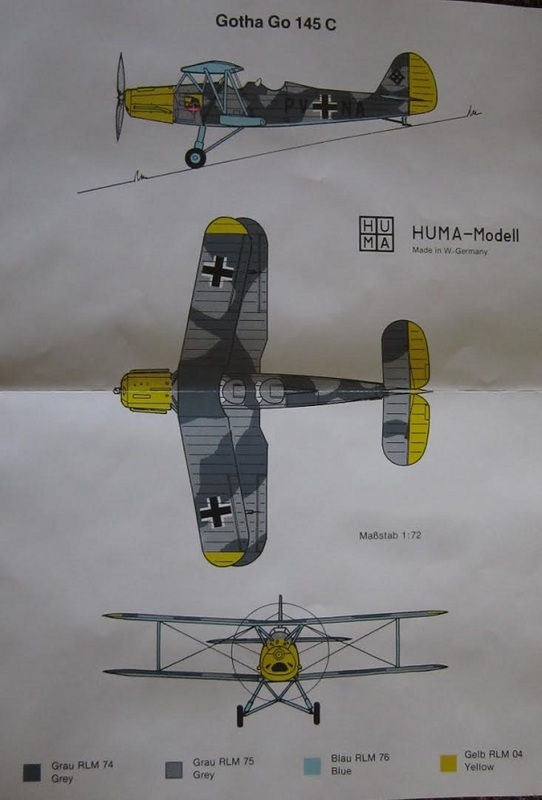 ​The reverse side of this sheet has 4 more schemes shown as 2-views.

A Go 145 A version with the black fuselage code D-IMNC. It has a red bandage on the rudder with a white circle with a swastika in it. Code is repeated in black above the upper wing.

A Go 145 B version in the same scheme with the black fuselage code of D-IALA. Code is repeated again in black above the upper wing.

A Go 145 B version in the same overall color with a red circle with a white triangle on it on the fuselage sides befor the black code 530. The rudder has three horizontal stripes on it in red white red. Anybody know what country these marks represent??

A Go 145 D version in the same scheme as the A version and the first B version with the black fuselage code D-IDCD. Code is repeated again in black above the upper wing. 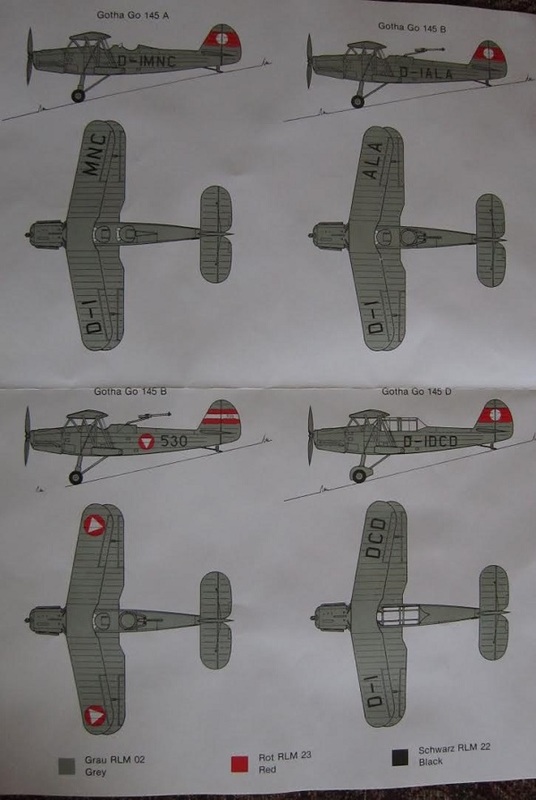 This looks like it will make up nicely in whatever choice of version that a modeler chooses. For a biplane this one has a minimum of wire bracing to add. Something I abhor doing personally. ​
I purchased this kit back in the 90's at a hobby shop in Allentown, PA. while visiting my mother who lived nearby. It was originally $15.95, but the shop had it marked down to $9.95.