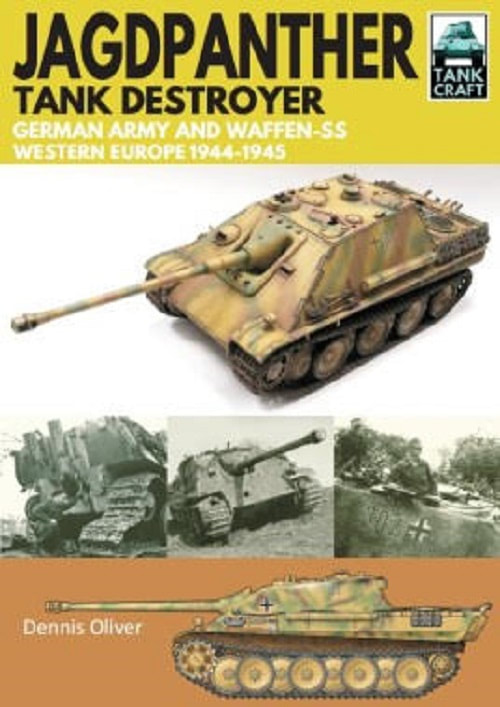 MSRP: $22.95
​Combining the destructive firepower of the 88mm gun with the outstanding mobility of the Panther series, the Jagdpanther is quite probably the best-known tank destroyer of WWII.

In the vehicle's first action on 30 July 1944, three jagdpanthers managed to destroy eleven British tanks in a viscious two-minute firefight near the village of Saint Martin-des-Bois in Normandy, cementing the Jagdpanther's reputation as a potent tank killer.

In his fifth book in the TankCraft series, Dennis Oliver uses contemporary photographs and meticulously researched, superbly presented color and monochrome illustrations to tell the story of these heavy self-propelled anti-tank guns and the units which operated them in the German defence of the Western Front.

As with all the books in the TankCraft series, a large part of this work showcases available model kits and aftermarket products, complemented by a gallery of expertly constructed and painted models.
Technical details as well as modifications introduced during production and in the field are also explained giving the modeler all the information and knowledge required.

Dennis Oliver is the author of over twenty works on Second World War armoured vehicles, including: To The Last Bullet, Germany's war on 3 fronts, Westwall, German Armour in the West 1945, Viking Summer and A Sound Like Thunder.
Pen & Sword Publishing is based in the UK.

It contains 8 pages of full color illustrations depicting 16 different Jagdpanthers, histories of the Jagdanther units that operated on the Western Front during 1944-1945, technical analysis and lists of modifications, color and black and white photos of model kits in available scales.

This Jagpanther's company number 01 identifies the battalion commander Major Erich Sttler, who was seriously injured when he and his crew abandoned this vehicle on 8 September 1944, after it had been ambushed by a number of British Cromwell tanks near Hachtel.

The back cover has 2 black and white wartime photos. One show a German mechanic spray painting a Jagdpanther. The other shows U.S. infantrymen examining a knocked out Jagdpanther. The first color shot is showing the rear of a unpainted Jagdpanther model. The second one is a profile illustration.

There is a map of Normandy and a organization chart of Jagdpanzer units.
There are 16 color side profile illustrations with color wartime photos tucked in between the profiles.

The first built up Jagdpanther model showcased is a Jagdpanther V by modeler Gary Kwan in Hong Kong using the MNH model. A black and white wartime photo is shown and 13 color walk-around shots of his model.

The second built up Jagdpanther model showcased is also a Jagdpather V by modeler Lim Kian Guan based on the Tamiya Jagdpanther V Spate Version, or late model. There is one black and white war time photo shown here too and seven color walk-around shots of the model and a shot of a black shoulder patch with silver death's head on it.

The third built up Jagdpanther model showcased is another V version by Japanes modelr Seiji Iwadate using the Bandai 1/48th scale kit. There is a black and white photo of the models rear and 11 color photos of it.

The fourth built up Jagpanther model showcased is another V version by Polish modeler Jaroslaw Witkowski. The model he used is the DML one with zimmerit on it. He put winter white-wash on it. There are 6 color walk-around photos of it.

The fifth built up Jadgpanther model showcased is yet another V version by Singaporean modeler Du Wei Jie using Tamiya's kit and PE details. There is a color wartime photo and 13 color walk-around shots of the model and a shot of a German Infantry Assault badge.

The section showing model kits and accessories shows Tamiya's 2 kits with 12 color shots of parts in them and each kit made up.

The dragon kit showing 3 shots of parts in it and made up.

Academy's two boxings of the Jagdpanther are shown with 3 shots of the parts and one of the decal sheet.

Italeri's kit is shown made up and 2 shots of parts in it.

Revell's 1/72nd scale kit is shown made up and one shot of the tracks.

GPM Model Kartnowe heavy-weight paper kit is shown in 6 walk-around color shots of the model made up. Impressive!

There is a black and white wartime photo of an abandoned German Flakpanzer IV Wirbelwind with an American G.I. on top of it examining it.

There is a black and white line drawing profile of a Jagpanther Ausf. G2 at the back of the book and cover arts for other books in the TankCraft series: Tiger I & Tiger II Tanks, Sherman Tanks, Panther Tanks & Churchill Tanks.

This is one neat book and will be of great interest to both modelers and AFV historians alike.

Highly recommended.
​I want to thank the folks at Casemate Publishing who sent me this sample and the folks at Pen & Sword
​All Pen & Sword books can be seen listed on their site at:
www.casematepublishing.com
or
www.pen-and-sword.co.uk
​