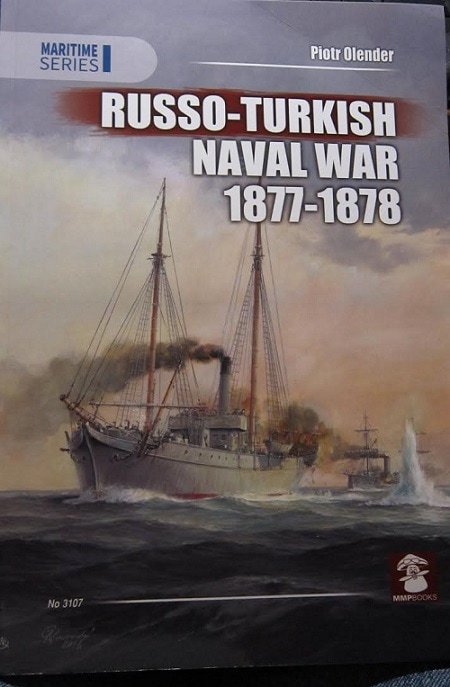 The Russo-Turkish War of 1877-1878 was a conflict between the Ottoman Empire and the Eastern Orthodox coalition led by the Russian Empire and composed of Bulgaria, Romania, Serbia and Montenegro.

Fought in the Balkans and in the Caucasus, it originated in emerging 19th-century Balkan nationalism. Additional factors included Russian hopes of recovering territorial losses suffered during the Crimean War, re-establishing itself in the Black Sea and supporting the political movement attempting to free Balkan nations from the Ottoman Empire,

There are 108 black and white paintings and illustration of mostly the ships involved and a few of crews and scenes.

There are 14 black and white photos of important individuals on both sides of the conflict and another 14 paintings of them.

There are 7 information tables and 11 battle maps in the book.

Appendix 1 is Pages of lists of Russian fleets number 16.

Appendix 2 is a page of Artillery armament of Russian and Turkish ships.

Appendix 3 is a page of Mines in the inventory of the Russian Fleet in 1877.

There are 19 black and white line drawing profiles of Russian ships and 11 of Turkish ones.

This book will be of great interest to historians and perhaps to modelers as well. Allthough I know of no model kits of any of the ships shown.

The only color in the book is the cover art.

I want to thank Roger Wallsgrove, editor-in-chief of MMP and the folks at MMP's associate Stratus in Sandomierz, Poland, who print all the MMP books. Stratus sent me this sample from Poland.

Stratus does their own line of books in Polish and English languages.


The book is available from all good bookshops in the U.K. for 20 pounds, or direct from the North American distribiter Casemate.

The Australian distributer is Platypus Publications.

Full details of all MMP books can be found at: