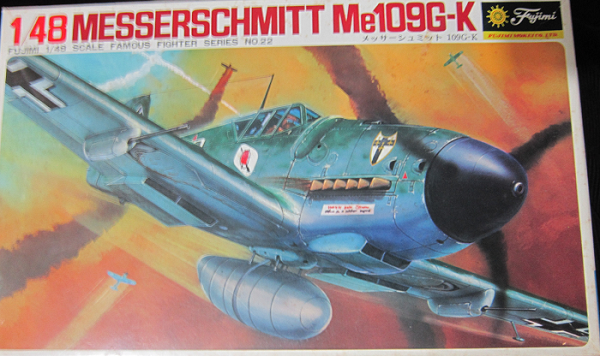 My kit has a copyright date of 1976 and is out of production. However, a re-boxing of the kit is available at several places in Europe for around $36.00, converting the Euro's. I paid a whopping $3.75 for my kit back in the 70's at a local hobby shop that went out of business.
​HISTORY:

Just as the Zero fighter plane is representative of Japanese planes during WWII, the Messerschmitt Me-109 was the primary representative for Germany. As the mainstay combat plane of the German Air  Force (Luftwaffe), the Me-109 redered distinguished service on each fighting front.

Various models, ranging from the prototype V-1 to K model were test-manufactured or mass produced and the number produced reached as high as 30,500 or approximately 60% of the total number of single-seated fighters that Germany produced during WWII.

By comparison, the most aircraft of any one else built was by the United States and was the Curtiss P-40 of which some 14,000 were manufactured.

The E model was the first to be mass produced. Further developments produced the F and G models. The G model, given the name "Gustav" includes series numbers G-0 to G-16.

The production of the Me-109G began in early 1942 with the Me-109G-0, which was powered by the 1,475 h.p. Daimler-Benz DB605A engine and equipped with a pressurized cockpit, which was especially suited for high-altitude action.

The Me-109G-1 Trop was especially built for desert operations. Some G-5 versions were equipped with a wooden tail assembly in a metal conservation effort.

The G-6 version were equipped with a 30 mm MK108 cannon firing through the propeller hub, two 13 mm machine guns above the engine and two 20 mm MG151 cannon mounted on pods under each wing.

The suffix letter "I" was not allocated and "J" was applied to the version to be manufactured under license in Spain by Hispano Aviacion.

The final German production model was the Me-109K, which was essentially similar to the Me-109G, but incorporated minor structural differences.

Today, there are just six original Me-109G's left. Two in the United States, and one held by the R.A.F. in England. Finland, Australia and South Africa each have one.
​THE KIT:

Fujimi-Mokei is a prolific model company based in Shizuoka City, Japan. They make all manner of model subjects in the popular scales.

The box art shows a Me-109G-6/Trop of 7th/JG27, December 1943.
It's spine is dark green over light gray sides with dark green mottling and a light-blue under-carriage. It has a black spinner, a white fuselage band, white fuselage code outlined in black of 8 + I. There is a white shield outlined in black with a black cross on it on the sides of the nose and a white blob with a a black cross hairs and arrow over a red apple on it under the cockpit and white wing tips.

In the background are 2 other Me-109's and an enemy aircraft going down in flames.

One side panel has a small color side profile of a Me-109G, with the same color scheme as the box art subject. It has a white fuselage band with a black chevron in front of it outlined in white a a logo of a white letter L outline in black over a black map of England and a black spinner.
​The other side panel has 3 small color box arts of other aircraft kits that Fujimi-Mokei manufactures: kit no. 13, a Fw-190A-6, kit no. 14, a Fw-190D-9 and kit no. 15, a Spitfire Mk. V. No scales are mentioned for these 3 and I assume they are most likely 1/48th scale. These are followed by a small color repeat of the box art.
​WHAT'S IN THE BOX:

The first instruction sheet consists of a single sheet that accordion-folds out into 8 pages in 6" x 11" page format.

Page 1 begins with a black and white repeat of the box art, over the history of the Me-109G-K in English.

Page 2 has the parts trees illustrations on it, along with a listing of the names of all the kit parts.

Pages 3 through 5 give a total of what I counted as 9 assembly steps. These steps are not numbered.

Page 6 has line drawing illustrations of 14 different versions of the Me-109G or K.

The top of page 7 has a 4-view line drawing for decal application purposes, over a listing of what the markings are (there are 49 markings on the large decal sheet) Wow!

The bottom of page 7 has a list of SPECIFICATIONS for the Me-109G's and K's.

Other 1/72nd scale kits just mentioned and not showing their box arts are: a E-2A Hawkeye, a A-1H Skyraider and a F-8D Crusader. No kit no's are provided for any of these.

The second instruction sheet is the same page size as the first instructions. It is just one page printed on one side in color on slick-coated paper. The reverse side is blank.

It hos 6 side view profiles and a top view. It is the color instructions.

1. A Me-109G-2/Trop with 1st/JG-17, Summer 1942. It is sand yellow with dark green mottling over a light-blue undercarriage. It has a white fuselage band ans white no. 2 outlined in black before the fuselage cross, a black and white spinner and a white letter "L" outlines in black over a black map of England and white wing tips.

2. A Me-109G-5 of the Gruppen Commandeur of JG-52, Hptm. G. Barkhorn. It has a dark green spine and dark green mottling over gray sides and a light-blue under-carriage. a yellow fuselage band and wing tips. The white name CRISTELL is under the cockpit and a shield that is divided vertically into half black and half red outlined in white with a white winged sword on it,  just in front of the windscreen on the sides.

4. A Me-109G-6 with III/JG-77, Leningrad, September 1942. It is overall dark green over a light-blue undercarriage. it has a black and white spinner, a yellow fuselage band and wing tips, a white fuse code of 6 + I outlined in black and a white shield with a black dogs head on it on the sides of the nose.

6. A Me-109G-14 with 9/JG-54, Home Defense, Germany, March 1945. it has a dark green spine with dark green mottle over gray sides and a light-blue undercarriage. It has a black spinner with a white spiral on it, a medium-blue fuselage band, fuselage number is yellow 9. There is a yellow shield outlined in black under the cockpit with a red devil's head on it. 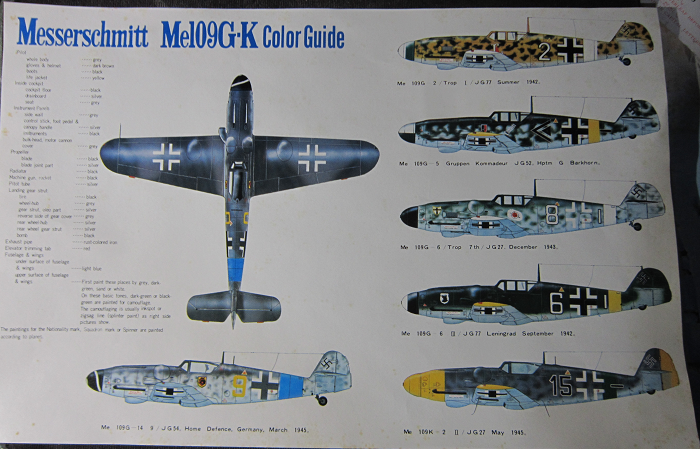 ​Trees are not alphabetized, but they are illustrated in the instructions as already mentioned and do have part number tabs next to the parts on the largest tree. 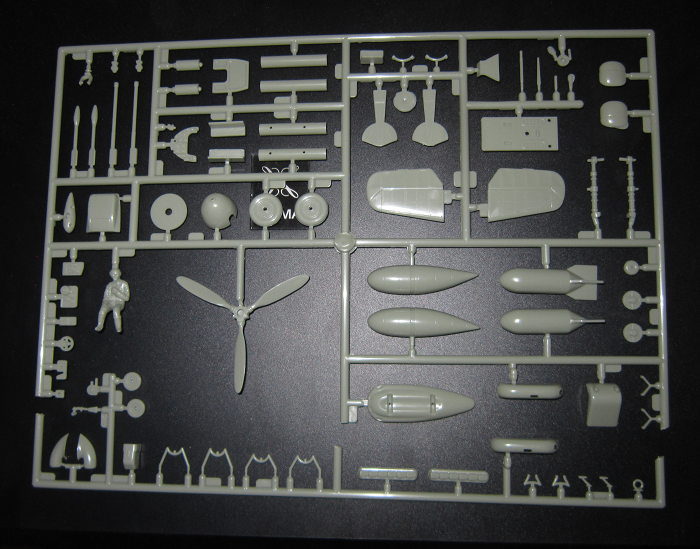 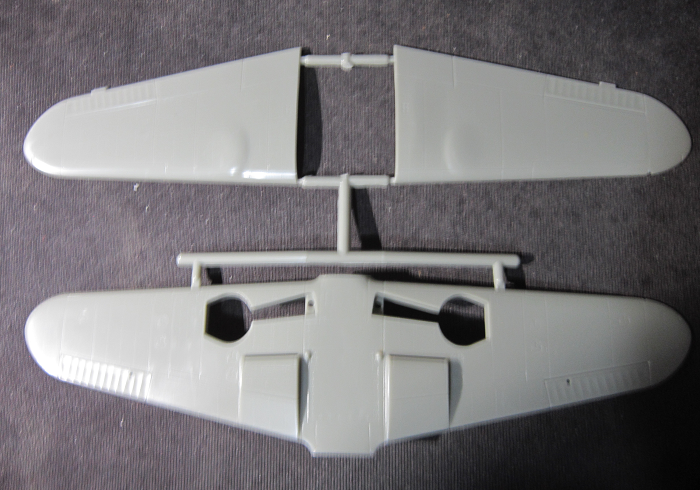 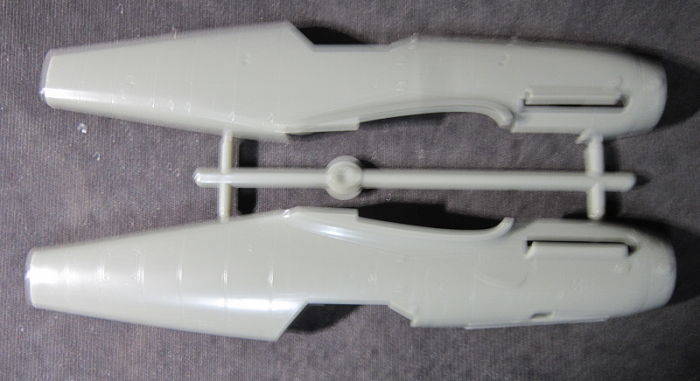 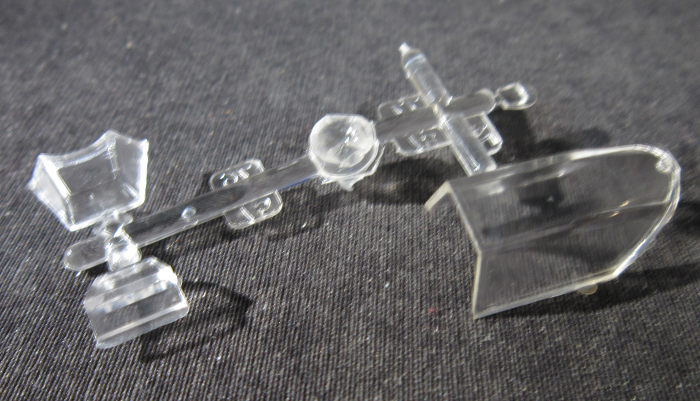 ​This is one nicely molded kit. Flaps are all molded solid ad the detail is engraved type.

The decal sheet completes the kit's contents and it is huge. It has no less than 30 squadron badges on it and victory marks to go on the rudder and gray Hungarian crosses. 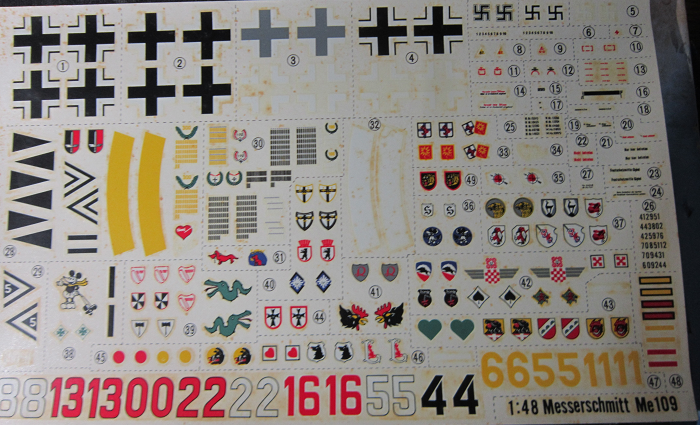 I have a copy of the old Profile Publications book that I will use as reference for building the kit. 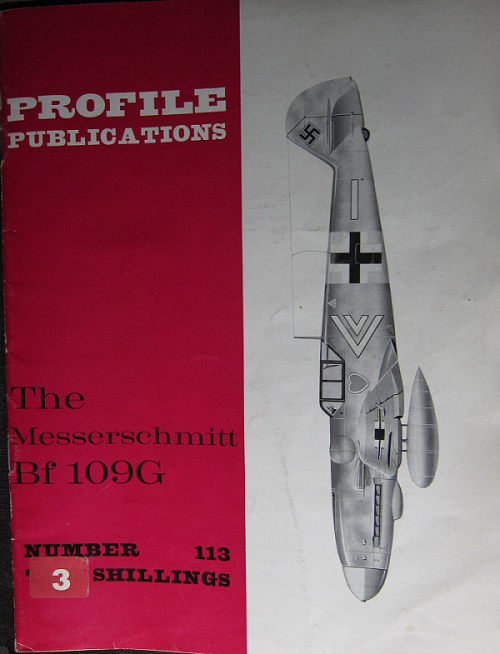