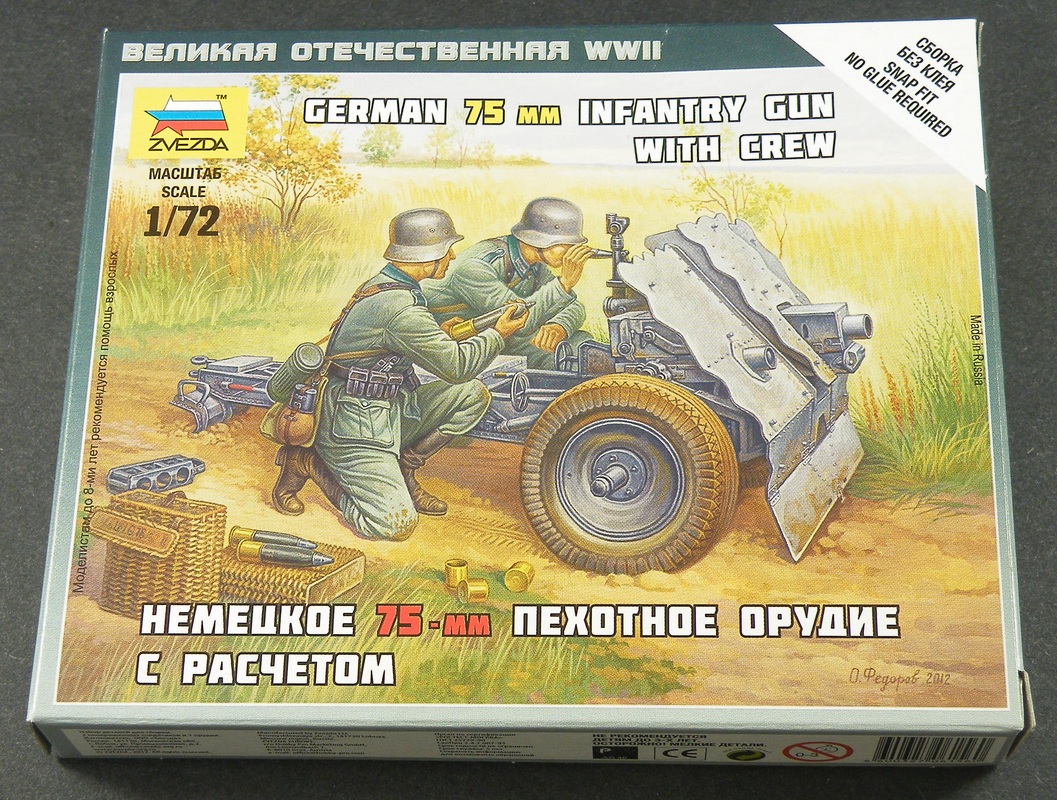 Zvezda have developed a line of fast build models for the game Art of Tactic and this latest one is the German 75 mm Infantry gun. After having reviewed their British 2 Pounder Anti Tank Gun I decided to buy this kit when I was in my local hobby shop and see what it looked like.
Contents

The model comes in an double end opening box with a color painting on the front which can be used as a painting guide. On the back of the box are photos of the unpainted model along with a description of the box contents, a scoring card and the web address for the Art Of Tactic game. A parts count and model length are also included. The instruction sheet is a single page with the front of the sheet giving information on the Art Of Tactic game and tips on assembling the kit supplied figures. The back of the sheet contains the assembly instructions of the gun and figures. All text is in either Cyrillic or English. 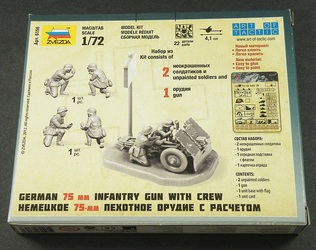 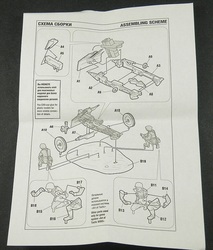 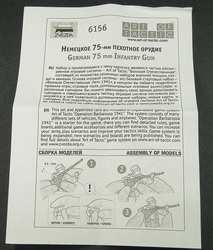 The model is contained on two trees of twenty two parts molded in flash free light gray styrene. One tree contains the gun itself and is composed of twelve pieces. The second tree contains the gun crew, diorama base and a flag marker for the game and consist of ten pieces. The diorama base has texture on the top with location holes for the pegs on the figures, wheels and marker flag. The gun detail is molded on but is well defined and can be easily enhanced with a simple wash and dry brushing. The figures are well sculpted with good facial expressions and realistic poses. While the box art shows ammo baskets and shells none are included in the kit. 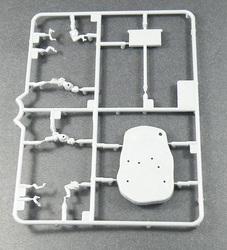 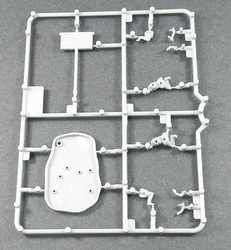 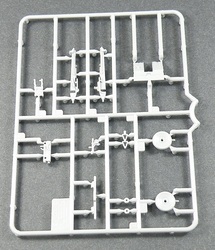 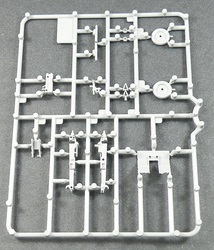 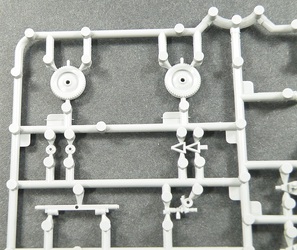 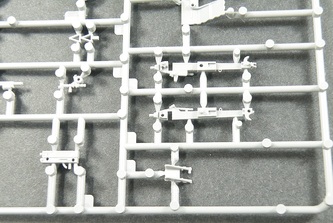 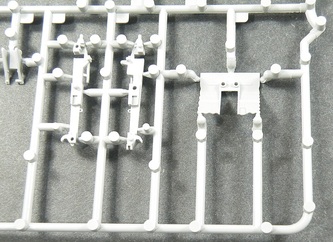 This was not a difficult model to assemble and it took about ten minutes to complete the gun and figures. The fit of the models were very good and I encountered no problems in assembling the kit. The only changes I made was to drill out the barrel end and add a hole to the breach block which was visible in the photos I found of the gun on the web. I also added some filler to the box lid that is mounted between the trails to eliminate a sink mark. Since I'm not using this as a war game model, I filled the hole in the base where the flag should be. One item that is rather simple compared to the real gun is the triangle braces that fit between the trails, Part A8. On the real gun these are strips of heavy sheet metal that are attached to the trail top and bottom in the shape of two triangles as opposed to two triangles molded in one piece that are hollow in the center but solid top to bottom. These could be replaced with strip styrene but check your reference photos to do this. I did not feel they detracted from the kit so I did not bother to replace them. The hand wheels, Part A9, are solid but have the brace detail molded in. The figures assembled quite well with locating pins and locking joints to aid in assembly. The seams were not too wide and even though I did not sand the mating surfaces I was able to reduce the seams by adding paint to them which reduced the width considerably so that it is barely visible. Even though everything is designed to snap together, and dose quite well, I still added glue to all of the joints on the gun and figures.

I primed the models with The Army Painter Base Primer Matt White and I brushed painted the model with Vallejo and Citadel paints exclusively. The Gun was painted using a mixture of ten parts Vallejo Model Color 70.993 White Grey and  one part 70.862 Black Grey for a Panzer Grey color.  The uniforms were painted 70.830 German Field Grey W.W.II.  The boots were painted Black Grey with the web gear and water bottle painted 70.872 Chocolate Brown while the canvas sack was painted 314 Canvas. The sack was dry brushed  with 819 Iraqi Sand and the faces and hands were painted Flesh.  The figures were then given a wash of Agrax Earthshade by Citadel Paints and after it had dried the uniform was then dry brushed with 338 Highlight German Field Grey.  The gun was given a pin wash of Citadel Washes Badab Black while the wheels, lower trail and front of the gun shield were washed with Agrax Earthshade. The model was then dry brushed with the Panzer Grey mix to bring out the details. The gun sight was painted Flat Black and a pencil was rubbed over it to show paint wear on the sight. The shell was painted Flat Black on the end and the casing was painted with Citadel Auric Armour Gold.
The base was painted with Brown Craft Paint and then sprinkled with Fine Turf by Woodland Scenic. The edges of the base were painted Flat Black and the gun and when everything was dry the figures and gun were added to the base. 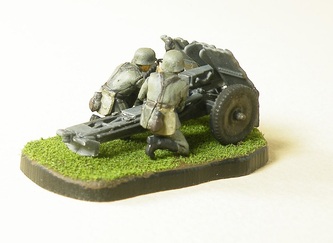 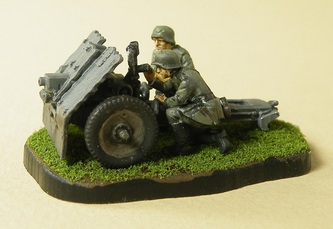 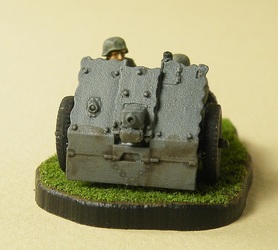 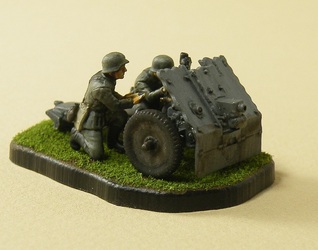 Zvezda have been releasing some very good 1/72 kits that are designed for the war gamer but are detailed enough for the display modeler and this kit was no exception. It was a fun and quick model to put together.  The detail is quite good and it is a great opportunity to practice your painting and weathering techniques without having to worry about a lot of construction. I highly recommend this kit to anyone interested in 1/72  W.W. 2 German artillery. I purchased this kit from Hobby Town South.