The Martin Model 167 was an American-designed medium bomber that first flew in 1939. It saw action in World War II with France and the United Kingdom, where it was named the Maryland.
In response to a United States Army Air Corps light bomber requirement issued in 1938, the Glenn L. Martin Company produced their Model 167, which was given the official designation XA-22. Martin's design was a twin-engine all-metal monoplane, capable of around 310 mph (500 km/h) with a crew of three.

The XA-22 was not adopted for operational service in the U.S., as the contract was won by the Douglas DB-7, which became the A-20 Havoc, but Martin received foreign orders, and about 450 of these fast, twin-engined bombers were built.

The prototype Model 167W was powered by twin-row Pratt & Whitney R-1830-37 Twin Wasp engines, which were replaced in French production aircraft by single-row 9-cylinder Wright R-1820 Cyclone engines (the Twin Wasps were then restored for the British Maryland). All versions of the Model 167 were armed with six machine guns, four fixed guns in the wings (mainly for ground attack), one dorsal gun and one ventral gun. In the prototype these guns were all 0.30 in Browning machine guns. The dorsal gun was mounted in a fully retractable turret. The French aircraft used license built Belgian Fabrique Nationale FN-Brownings, and used a lighter semi-retractable dorsal turret. The weight saved helped to increase the top speed to 288 mph (463 km/h).

The Model 167 was a fairly typical twin engined bomber of the period. The most unusual feature of the Model 167 was the very narrow fuselage although it was shared with a number of late pre-war contemporaries. The crew of three were carried in two isolated compartments – the bombardier sat in the nose below the pilot and the gunner was in the mid-upper twin-machine gun turret in a separate rear compartment, isolated by a bulkhead.

Glenn L. Martin doubled the size of the Baltimore factory, and built all 115 aircraft in six months, but they were then prevented from delivering them by a US government arms embargo. Despite this the French placed an order for an additional 100 aircraft. The embargo was lifted in October 1939, and the 115 aircraft from the first order were delivered by late November 1939. Deliveries then slowed down, and only 25 of the second batch reached France before the Armistice of 22 June 1940.
​THE KIT:

This kit came in a tray and lid type box that was not shrink wrapped, but instead was held shut with tape.

The box art shows a Maryland with one engine on fire and firing its dorsal turret machine guns at a Fw-190 that is pursuing it. It is in a wave pattern of green and brown over a blue undercarriage. It has Free French "Cross of Loraigne" roundels and the French tri-color on the rudder. It has a logo of a blue circle with a white camel on it on the sides of the fuselage nose.

One side panel says you can build one of two schemes with the kit, in multiple languages, including English and has color photos of these 2 schemes.

2. A Maryland with 24 Sqdn., No. 3 Wing, South African Air Force, North Africa, 1941-42. It is in two shades of brown wave pattern over blue undercarriage also.

The other side panel lists features of the kit in 6 languages, including English. These features are: 58 parts and a display stand, transfer sheet containing 2 separate markings in authentic colors, alternate undercarriage positions, movable propeller and wheels.

The bottom of the box has two 3-views of the two schemes.

2. A British scheme in a wave pattern of matt middle stone and matt dark earth with an azure blue undercarriage. It has a white letter X over the fuselage roundel and a red, white and blue fin flash. Unit mentioned above.
​WHAT'S IN THE BOX:

The top of the sheet has international assembly symbol explanations in 7 languages, including English over 8 assembly steps and a customer service coupon. This sheet is folded several times to fit the box. There are no part trees illustrations provided.

Trees are not alphabetized like in most kits today.

​The 2nd med-grey tree holds: the other fuselage half and repeats of the other parts on the 1st tree. (8 parts) 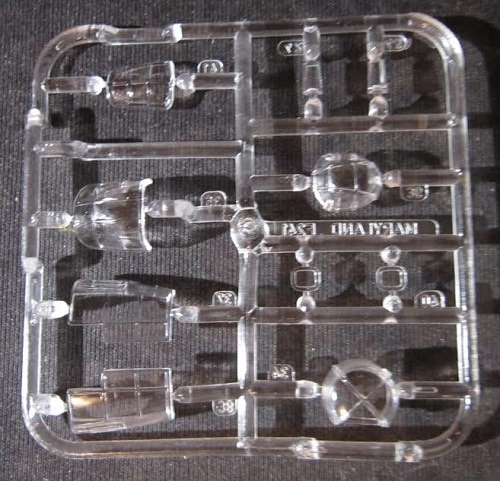 ​There are some part numbers on tabs next to parts on the trees, but NOT next to all the parts.

The parts trees fit this box tight and are not in a cello bag.

The final med-grey parts are the 4 wing halves. 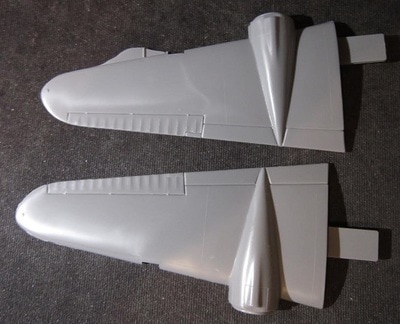 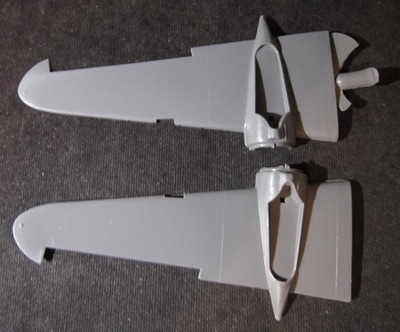 ​The decal sheet completes the kits contents. It came with a frosted sheet to protect its face from scratching, but it was floating around loose...so I stapled it to the decal sheet.

​Flaps are all molded solid and panel lines are of the raised variety.

This is a nice older kit. Recommended.
​I bought my kit at my local hobby shop years ago and am willing to sell it for a decent offer.