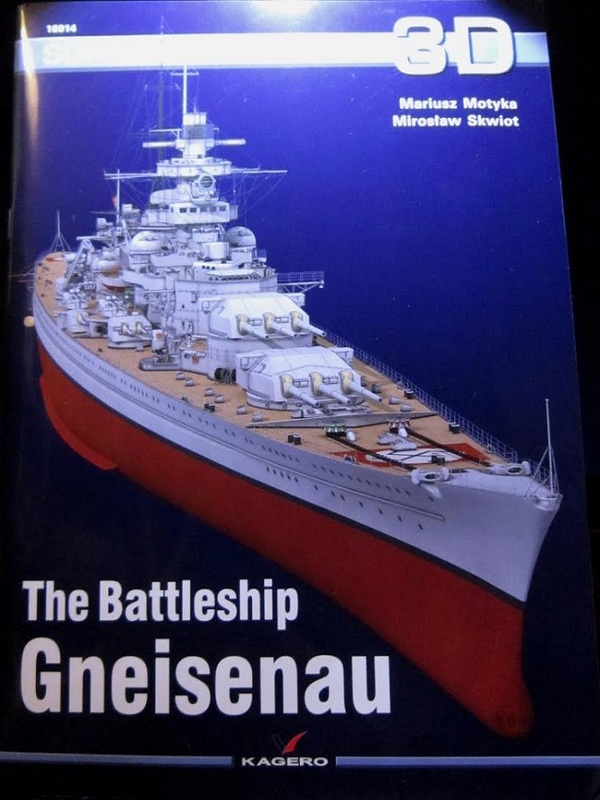 Review of The Battleship Gneisenau

Gneisenau was a German capital ship, alternatively described as a battleship and battlecruiser, of Nazi Germany's Kriegsmarine. She was the second vessel ofher class, which included one other ship, Scharnhorst. The ship was built at the Deutsche Werke dockyard in Kiel; she was laid down on 6 May 1935 and launched on 8 December 1936. Completed in May 1938, the ship was armed with a main battery of nine 28 cm (11 in) C/34 guns in three triple turrets, though there were plans to replace these weapons with six 38 cm (15 in) SK C/34 guns in twin turrets.

Gneisenau and Scharnhorst operated together for much of the early portion of World War II, including sorties into the Atlantic to raid British merchant shipping. During her first operation, the two ships engaged the auxiliary cruiser HMS Rawalpindi in a short battle. Gneisenau and Scharnhorst participated in Operation Weserübung, the German invasion of Norway. During operations off Norway, the two ships engaged the battlecruiser HMS Renown and sank the aircraft carrierHMS Glorious. Gneisenau was damaged in the action with Renown and later torpedoed by a British submarine, HMS Clyde, off Norway. After a successful raid in the Atlantic in 1941, Gneisenau and her sister put in at Brest, France. The two battleships were the subject of repeated bombing raids by the RAF; Gneisenau was hit several times during the raids, though she was ultimately repaired.

In early 1942, the two ships made a daylight dash up the English Channel from occupied France to Germany. After reaching Kiel in early February, the ship went into drydock. On the night of 26 February, the British launched an air attack on the ship; one bomb penetrated her armored deck and exploded in the forward ammunition magazine, causing serious damage and a large number of casualties. The repairs necessitated by the damage were so time consuming that it was determined to rebuild the ship to accommodate the 38 cm guns as originally intended. The 28 cm guns were removed and used as shore batteries. In 1943, Hitlerordered the cessation of conversion work, and on 27 March 1945, she was sunk as a blockship in Gotenhafen (Gdynia) in German-occupied Poland. She was eventually broken up for scrap in 1951.

Kagero is a prolific publisher of books in Lublin, Poland.

This book is soft-cover of 82 pages in 8 ¼” x 11 ¾” page format. Including the front and rear cover, it contains 135 computer-generated color walk-around type illustrations that show every inch of the ship’s external anatomy.

There are 3 loose sheets inserted into the book. One is 11 ½” x 16”, folded in the center to fit the book. It has a computer generated illustration of th Gneisenau on one side showing its port and starboard sides and deck. The other side of the sheet has another view of the ship, its launches, achors, life boats, range-finders and cranes.

The second sheet is 27” x 19”, folded 4 times to fit inside the book. I has line drawings on both sides. One side has black and white line drawings of the port and starboard sides and deck again. The other side has a stem view of the superstructure, walk-around illustrations of the battleship;s main battery turrets, port and starboard views of the superstructure and a bow view of it. These are all in 1/350th scale.

The third sheet is also 27” x 19”, folded 4 times to fit inside the book. I has more 1/350th scale black and white line drawings of more sections of the ship. Neat!

The book does all the computer-generated color illustrations as being 3-dimensional (3D). There is a pair of cardboard glasses with one red lens and one blue lens in the book to view these with. The book is wrapped in a re-sealable clear envelope.

I want to thank the folks at Kagero and at Casemate, that sent me this review copy. Casemate is the U.S. distributor of Kagero books. The book is in English.