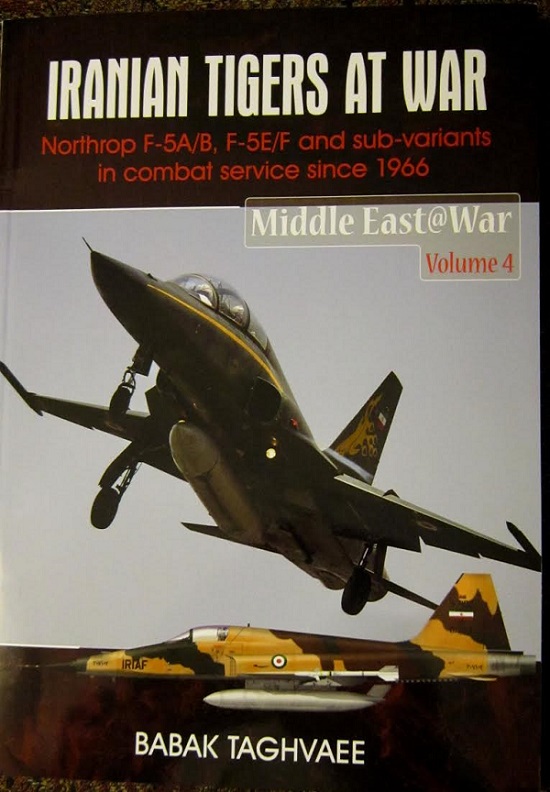 
MSRP: 16.95 Pounds ($25.75 U.S.)
The development of the F-5 lightweight supersonic fighter in the mid 1950s was almost a gamble for the Northrop Corporation, but ultimately resulted in one of the most commercially successful combat aircraft in modern history. Iran was one of its major export customers, yet the long and often violent history of development of the F-5 in that country has largely escaped attention of historians.

No less than 309 aircraft of five major variants of the jet – the F-5A, F-5B, RF-5A, F-5E and F-5F – have provided the backbone of the front line strength of the Iranian Air Force since the mid-1960s. Additional examples were clandestinely purchased from Ethiopia and Vietnam in the 1980s. The type bore the brunt of combat operations during the long war with Iraq, 1980-1988, and remains a mainstay of the Islamic Republic of Iran Air Force as of today.

This breathtaking account provides a detailed chronological history of the F-5 in combat service in Iran, a history dominated by long-range strikes against some of the best defended targets inside Iraq, and by thousands of dramatic close-air-support and reconnaissance sorties. Also are fierce air combats against the then most modern fighter types in Iraqi service, including the MIG-23s and MIG-25s.

It is completed with practically unknown stories of their combat presence in Pakistan, Afghanistan and the war against drug  traffickers in recent years. Good though the F-5 has been, the advances of domestic Iranian aircraft building companies have resulted  in attempts to continue the F-5 line with further redesign and development, resulting in a number of indigenous variants. Combined, this means that the diverse and involved story about one of the most interesting military aircraft of modern times is still far from over.

The author’s detailed text is fully supported by an extensive selection of photographs and color profiles.

The author Babak Taghvaee is an Iranian journalist, photo-journalist, historian and defence analyst, with a passion for aviation. He  co-authored his first book, The Modern Iranian Air Force, which was published by Harpia Publishing in 2010. Since 2007, he has written over 70 articles on Iranian, Russian and Ukranian military aviation.

In January 2011, he convinced the IRIAF authorities to restore eleven abandoned aircraft from the defunct Ghale Morghi air force museum by transporting them to Downhan-Tappeh airfield. Later that year he was invited to become a volunteer researcher and historian for the air force, and was one of two supervisors on the historical research project, Project Identity of the Air Force in the IRIAFs Strategic Research Studies Office before becoming an adviser to the Iranian Aircraft Industries Organization on their aircraft upgrade project.

However, the following year he was arrested because of his expose of the high level of corruption in the Iranian aircraft industry. After several months in solitary confinement, he was charged with being a threat to national security and was tried in the Islamic Revolution Court, but managed to flee the country in August 2013 after being released on bail. This book is a product of the Iranian Ministry of Information historical records that he managed to hide during the period of his arrest.

Included also is a black and white photo of a cockpit interior and a console.

There are 16 color profiles (one as a 3-view). Including 5 illustrations of squadron logos. The artist of these was Tom Cooper.

There are 9 map illustrations.

There are 16 color photos of F-5s. a group shot of pilots, 4 of individual pilots and 4 photos of squadron logos.

There are 2 charts in Iranian language, 2 data lists in English.

The bibliography at the back of the book with a biography of the book’s author completes the inside of the book.

I recommend this book to aircraft modelers and aircraft historians and enthusiasts.

I sincerely thank Helion and the folks at Casemate Publishing who sent me this review sample.

Casemate is the U.S. distributor of Helion books and all of Helion’s book titles can be seen on Casemate’s web site.