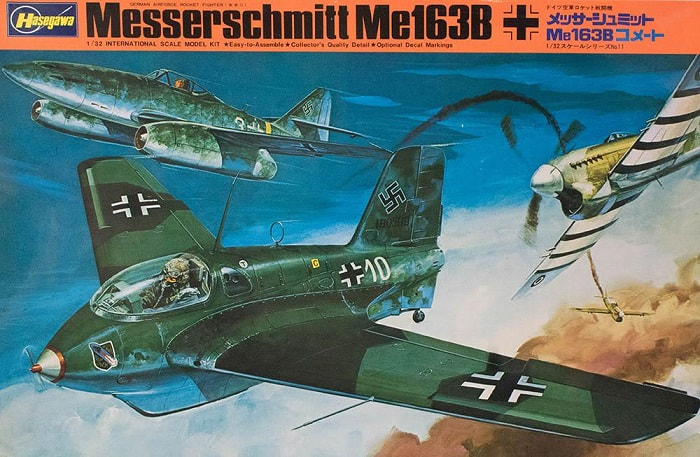 Over 300 aircraft were built, but the Komet proved ineffective in its dedicated role as an interceptor aircraft and was responsible for the destruction of only about nine to eighteen Allied aircraft against ten losses. Aside from combat losses many pilots were killed during testing and training.

Hasegawa is an old prolific model company base in Shizuoka City, Japan. They make all manner of model subjects in the popular scales.

The box art shows a Me-163B and a Me-262 fleeing from 2 British Tempest fighters, one of which is trailing smoke.

The 163 is in a splinter pattern of black-green and medium-green over a light-blue undercarraige. It has a red, white and red nose generator and white fuselage no. 10. It has the Farting flea logo on the sides of the nose.

The Me-262 is in a mottle of dark-green over gray with a light-blue undercarraige. It has a yellow fuselage band and a white number 3 on its sides.

Both the Tempest's are in a wave pattern of green over gray undercarraiges. They have black and white invasion stripes below the wings and white spinners. No other marks visible.

One side panel has a color illustration of the Walter 509A rocket motor, followed by a small repeat of the box art.

​The other side panel has a color profile of the 163 in the same color scheme as the box art, but with a white fuselage number 13. It carries the Fartin Flea logo on it's nose.

This is followed color illustrations of the logos for: 1st/JG.400, a white shield with a pirate on it, the Fartin Flea logo of 2nd/JG.400 and a shield with a rocket shooting upwards from the clouds from the Komet Training Staffel, followed by a one-paragraph history of the Me-163 in Japanese and a repeat of the box art.

This kit held trees in medium-gray and clear. I don't remember how many trees there were or if they were cello bagged. The only remaining tree with wings on it (4 parts) is still intact and part of a tree with alternate tail wheels etc. on it (6 parts remaining).

The clear tree is intact yet and holds the cockpit canopy, armored windshield glass and wing light lenses (5 parts)

The box has a strange addition inside of it. One end has a cardboard tube that is marked as being a Calendar. It has a sliding rule inside it and the markings are all in Japanese. So, I don't know what it's supposed to indicate?

​I have assembled and painted the rocket and cockpit interior. I dropped the kit on the floor and broke the landing skid support arms off the skid and lost those parts on the floor of my messy basement. Never to be found again. So, I will have to build the model with the skid collapsed.

Which is okay as I have seen pictures of this aircraft on the ground with skid extended or retracted. 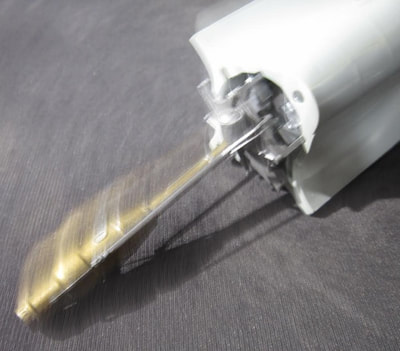 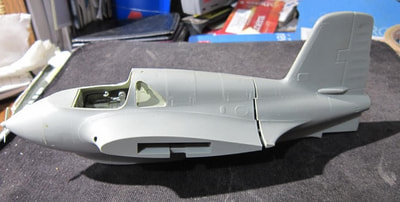 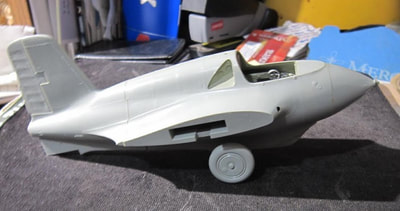 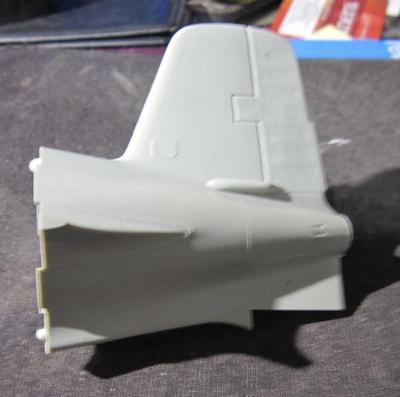 ​I bought the 1/32nd scale white-metal Rocket Pilot figure, 1945, kit no. 32, by Squadron-Rubin Miniatures brand, that I will add to the kit.

I still need to add the wings and there is one tree left that has the tail wheel on it. 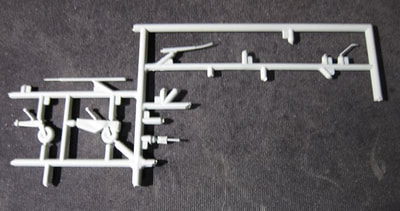 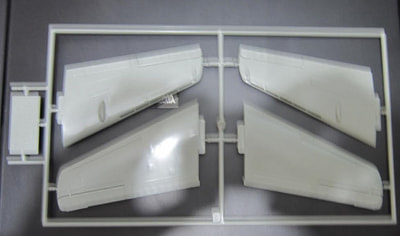 I had an 1/72n scale Airfix bag kit with color schemes I kept that are similar to the Hasegawa kit. 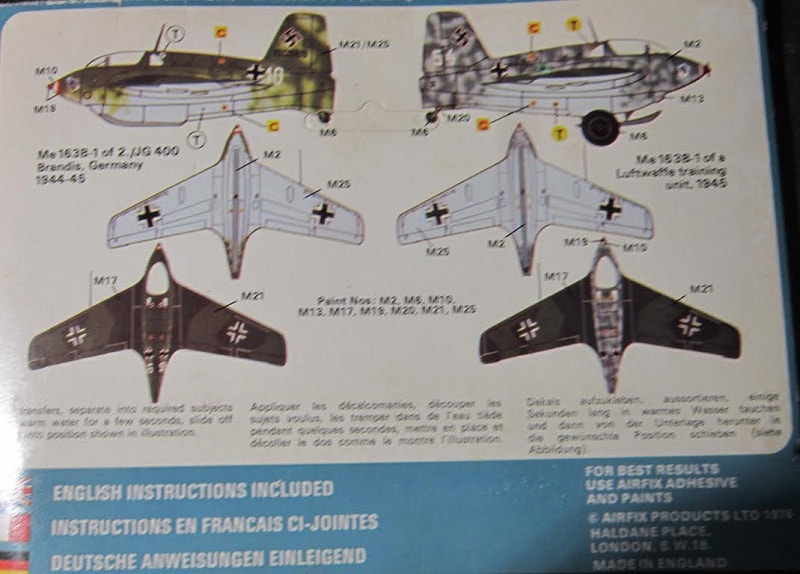 The decal sheet for the Hasegawa kit. 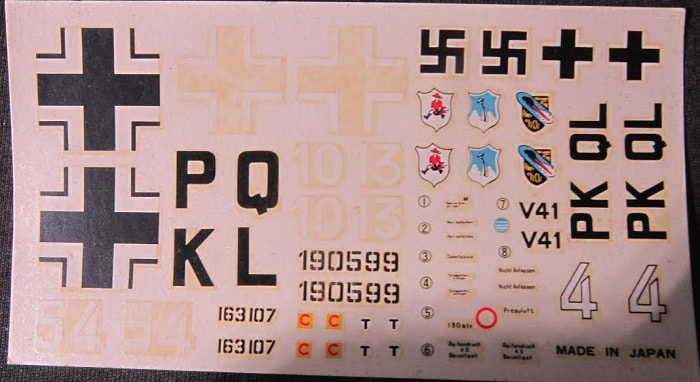 ​There are 3 instructions sheets in this kit.

Page 1 begins with 2 black and white walk-around type photos of the model made up. One view is a side view of no. 4 Me-163 with the pirate shield and a view of it with its tail removed, over the history of the 163 in Japanese. and 2 black and white photos of 163's in museums.

Page 2 through 5 give a grand total of 13 assembly steps, with 10 more black and white photos of 163's in museums scattered throughout these pages.

Page 6 has the parts trees illustrations, over a listing of the names of the kit parts in Japanese only.

The second instruction sheet is the schemes in color, printed on slick-coated paper on both sides. The face side has 3-views of 4 different schemes (3 already described above) and a all-red 163 of the prototype V-41 with that number in black on the rudder and black fuselage code PK + QL. 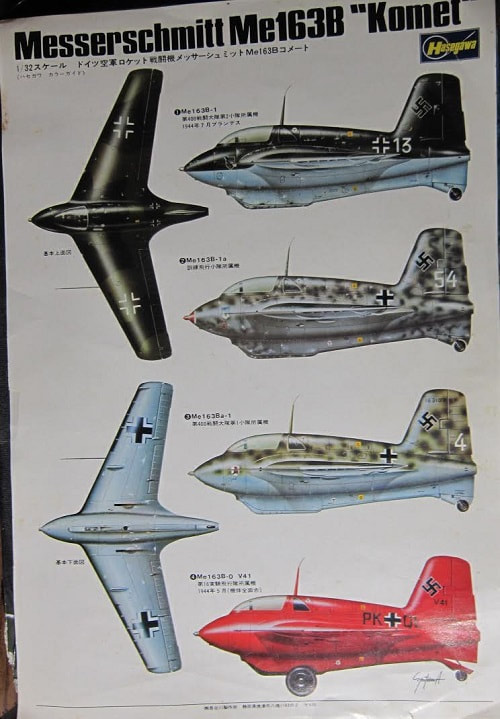 ​The reverse side has a 3-view line drawing for marking and placing of decals instructions and a black and white photo of the rocket engine in a museum, all in Japanese.

The other side has 4 instructions for assembly of the cockpit and landing skid in 3 languages, including English.

I Xeroxed a cut-away illustration out of an issue of Air International magazine of the Me-163 and added it to the box.
​This is a highly detailed little fighter. It has always been of high interest to me, because the local IPMS Club chapter was named after Alexander Lippisch, who designed the aircraft and migrated to our city after the war.

Highly recommended. It is an easy build and well within the skills of the average modeler.
​Nice both raised and engraved detail.