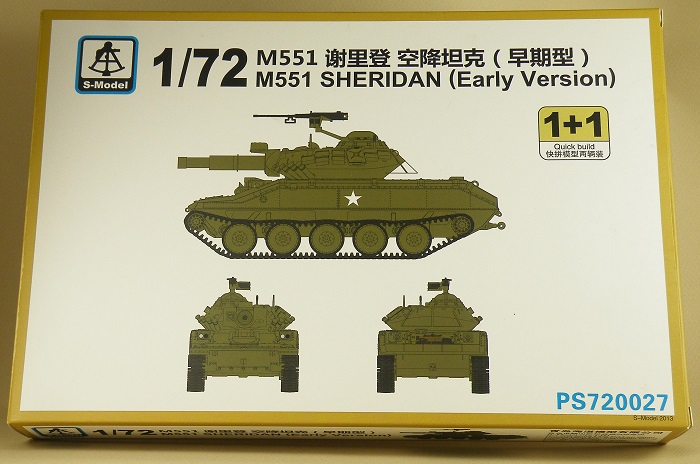 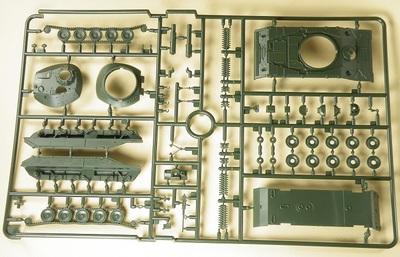 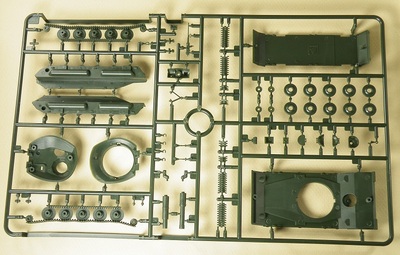 For decades the small scale modeling community has been waiting for an accurate model of the M551 Sheridan tank in styrene to replace the old Airfix kit which, for its time, was the only game in town. S-Model of China has recently released a kit of the early version of the Sheridan in 1/72. A cursory look at the kit showed that this is a very detailed and accurate model. I decided to see just how close S-Model has come to making an accurate M551 and for this I used scale drawings and walk around photos from the web. The shape of the M551 is very complicated and not easily captured in any scale so the plans and photos would be of great help.

My plans and primary source of information came from the Richard Hunnicutt book "Sheridan - A History of the American Light Tank"  and were scaled down from 1/48 to 1/72 using my printer and scanner.  I also used walk around photos from Prime Portal for close ups of various areas of the tank so I could make visual comparisons to the model against the full size vehicle. A complete list of my sources will be at the end of the review. This is a quick build model and as such the suspension is molded in one piece, however the kit has enough detail for the display modeler. And the best part is you get two of them!

For me this is the make or break of a tank model and I must say that S-model has done an excellent job in this area. The track units are molded as one piece and include the  five outer road wheels, drive sprocket, and return idler molded to the top and bottom run of the tracks. A separate set of wheel backs are supplied to give the look of double wheels to the road wheels, idler and drive sprocket. There are four separate sections of track that need to be added to each set of tracks. Two are straight runs and two are curved to fit around the idler and drive sprocket. From the plans everything scales out accurately, however the top track run touches all five road wheels instead of the center wheel only. To correct this the top track run would need to be removed from the road wheels and carefully curved to only touch the center wheel. The track pads are nicely done and the guide teeth are molded onto the tracks. There are no lines on the inside of the main run of tracks to delineate the individual links but there are on the four separate track pieces that need to be attached to the model. 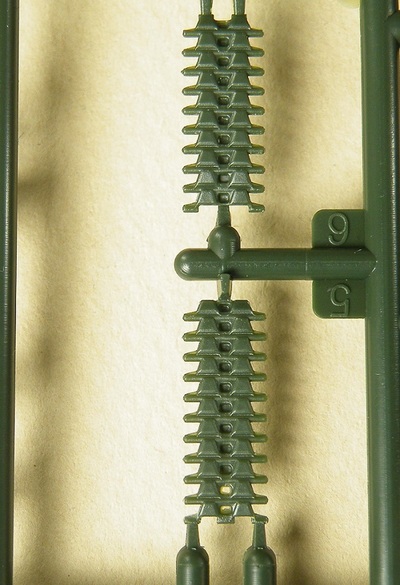 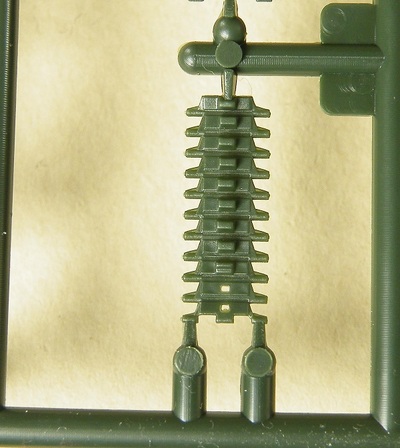 I was highly impressed with the accuracy of this part. The sides have recesses molded in as per the real tank, along with the shock absorbers and suspension arms . The hull bottom is detailed but I cannot confirm the accuracy of it. One thing that is odd is that additional armor plating is molded to the lower bow plate of Part A1. This plating was used for the M551 tanks that were used in Vietnam as protection against mines and was not on the early production models. Additional armor would be needed for the hull side recesses but this is not included in the kit. To make an early production model this armor should be removed unless you are building a Vietnam M551, and then you should add the armor over the side recesses and on the hull bottom extending between the second and third road wheel. 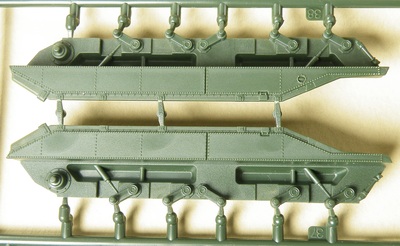 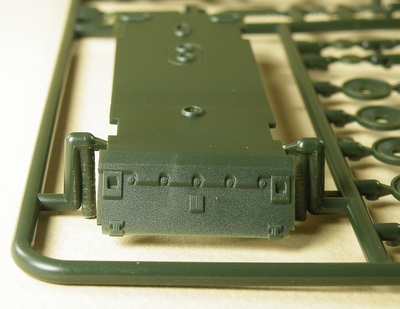 All the detailing such as rivets and panel lines are there and it is very well done. The tools are molded onto the rear plate but the lifting hooks and the drivers rotating hatch are separate pieces. The only real concern I noticed is that the top of the flotation covers and the engine deck hatches stand higher than the grill vents. The covers should be level with the grill hinges and not above them. Compared to photos it is noticeable but does not seem to detract from the kit. I have to say that, with this exception, the entire hull is quite good and very accurate. 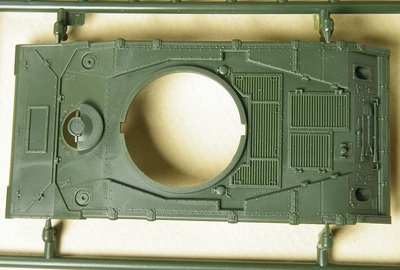 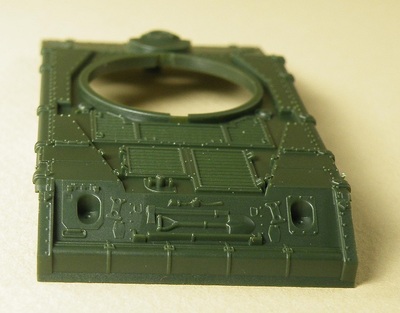 When viewed from the scaled down plans the commander's side of the turret armor is not as rounded as in the plan but everything else seems to match it. I did look at the angles of the turret and they also appear to match with the drawings that I have. 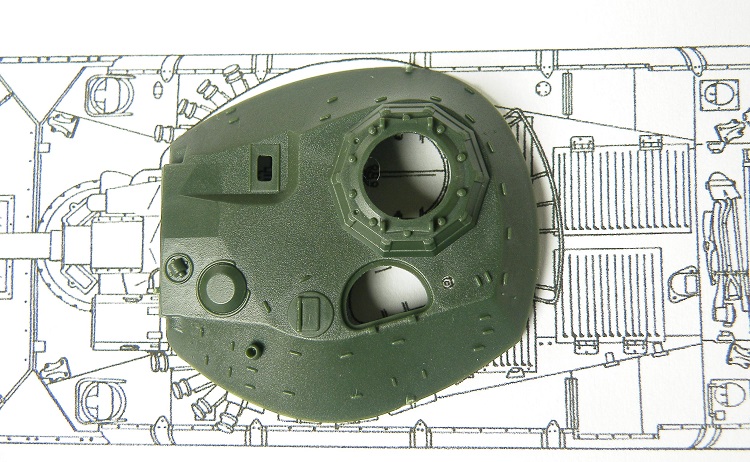 One nice feature about this kit is you are given two types of main gun tubes.  The first one is the original gun tube, Part A33 which is used for the Open Breach Scavenger System and was mounted in the pre production and early production models. The second one, Part A32, is for the Closed Breach Scavenger System equipped tanks which is a much narrower barrel and the one that was more commonly seen on the production models. Both gun tubes are hollow at the end and do not need to be drilled out. 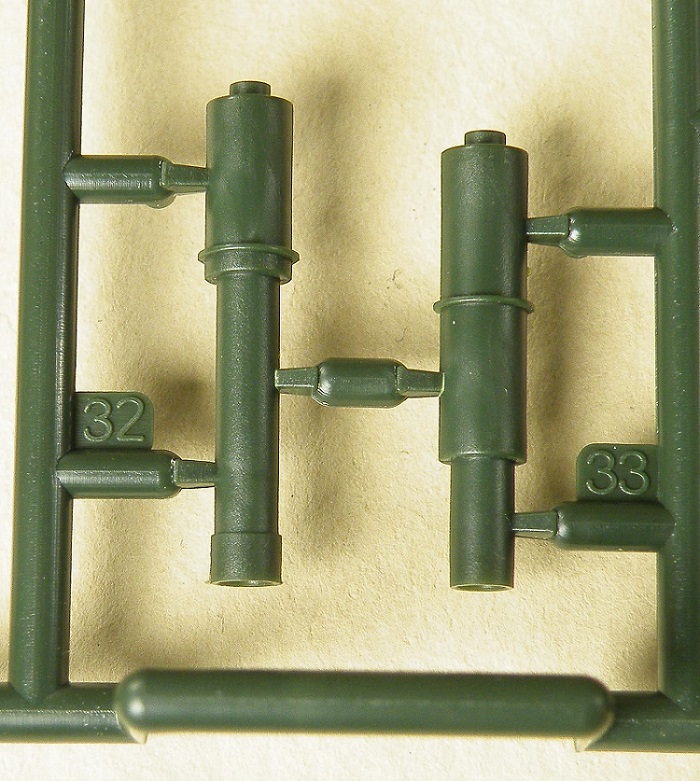 The mantlet is well done and even has the perforations that surround the gun tube molded into it. Other options are open hatches for the commander and loader and a .50 caliber M2HB, which is well detailed and includes separately molded hand grips. 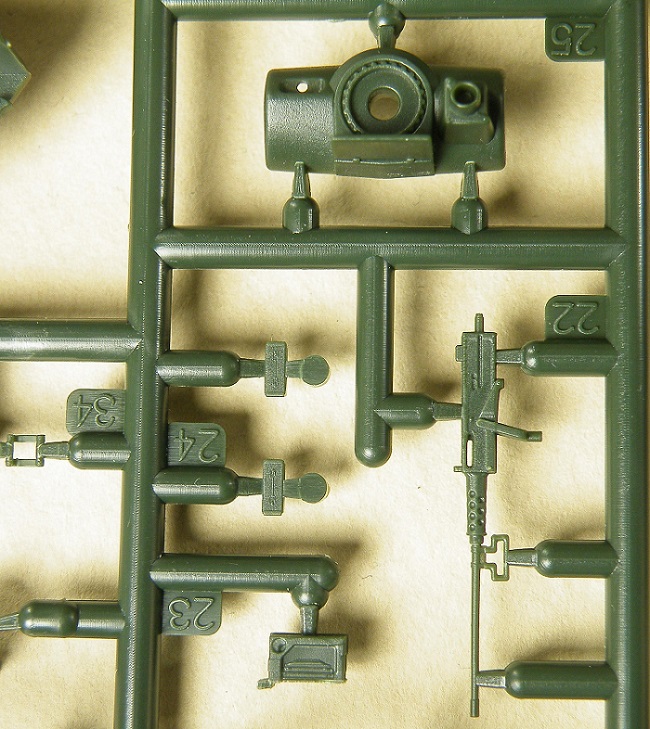 Another addition is spare .50 caliber ammo boxes to be mounted on the turret as well as eight smoke grenade launchers.

Since this is a pre or early production model no search light and mount are included. This would have been very helpful to have as most M551 carried a search light on the mantlet. However it should not be too much trouble to scratch build one.
Accessories

Two photo-etch frets are included in the kit with the first being comprised of four light guards and two small turret baskets while the second fret includes ten tow rings for the tank hull. A decal sheet is included which contains markings for at least two tanks; one of which is for a Cavalry tank for an unidentified unit. I suspect it is for an 11th Armored Cavalry Regiment. No instructions are included as to placement of the decals
although the back of the box does have a painting guide. 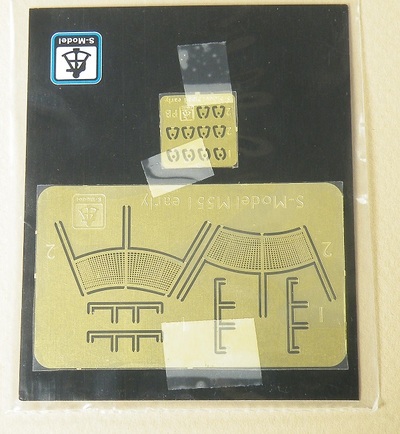 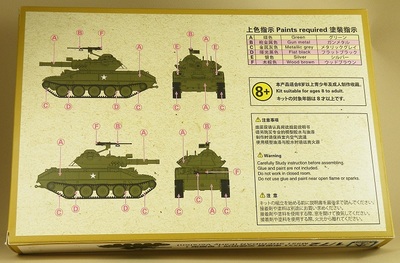 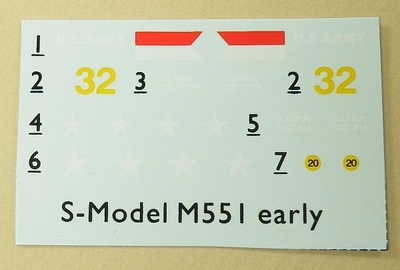 As a modeler I have been waiting a long time for an accurate M551 Sheridan Light Tank to be produced in 1/72 and molded in styrene and I am happy to say that we finally have one thanks to S-Model. While I have found some minor issues and a bit of mixing between the early and late model M551 lower hull, this is an excellent model and one I consider worthy of purchasing. I will certainly purchase more then one kit and I have plans to build the OPFOR VISMOD tanks at the National Training Center at Ft. Irwin, California. I hope that S-Model plans to release a later model with a search light, a full turret stowage basket and commander's armor as is seen on the Vietnam Sheridan tanks. If they don't the items needed to make this into a Vietnam M551 are within the abilities of a modeler familiar with minor scratch building.  I highly recommend this kit to anyone interested in modern armor. I purchased my kit from Free Time Hobbies.