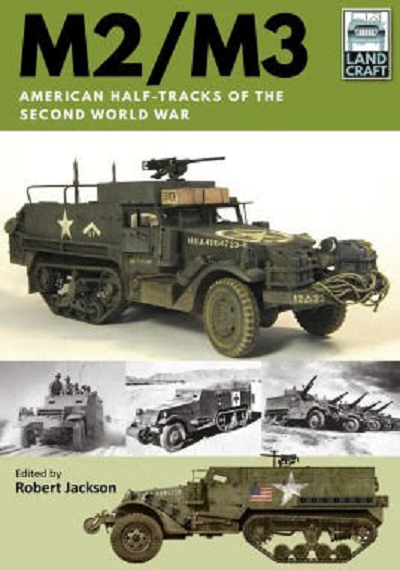 Pen & Sword Ltd. is based in Yorkshire, UK.

The cover arts shows the DML Dragon 1/35th scale M2A1 kit made up.
In the center on the left is a M2 during a desert fighting exercise in April 1942.

In the center, the U.S. Army modified some half-track Personnel Carrier M3's to serve as armored field ambulances. In the center on the right is a 75 mm Gun Motor Carriage. M3's were only a stop-gap vehicle.

At the bottom is a color profile of a M2 as it looked in Tunisia during Operation Torch, November 1942.

The back cover shows 3 black and white photos and another color profile.

The top black and white photo is of a M5 Personnel Carrier that looked remarkably similar to the half-track Personnel Carrier M3, except that it did not have the hundreds of slotted oval-shaped screws that held together the face-hardened armor (FHA) of the M2/M3 series.

The second color photo shows the interior of the Tacom 1/35th scale M3 GMC.
The third illustration is a black and white wartime photo of a M15 Combination Gun Motor Carriage.

At the bottom is a color profile of of a half-track with the 8th Army.

Among the most successful armored vehicles produced by American industry - known as the Arsenal of Democracy -during WWII were the M2 and M3 half-tracks.

They served on every battle-field and were as recognizable as other famous American wartime vehicles, like the Sherman's and the Jeep, and around 40,000 were produced between 1941 and 1945.

They were easy to assemble, operate and maintain, and their versatility allowed them to fulfill a variety of purposes.

This volume in Pen & Sword's Land Craft series traces the design, development and manufacturing history of the M2/M3 and describes its operational role within the Allied armies.

A selection of black and white photos showing the M2/M3 in action gives a graphic impression of how adaptable these vehicles were and records the range of equipment they could carry.

There are 46 of these photos. 19 of them are the walk-around type.

This book is an excellent source for the modeler, providing details of available kits, together with specially commissioned color profiles demonstrating the M2/M3 used by different units and armies.

Showing models made up are:

Inside the back cover of the book there are 15 black and white cover arts of other AFV books that Pen & Sword Ltd. publishes:

Robert Jackson is the author of over eighty books on military aviation and scientific subjects. He was defense and science correspondent for a major British newspaper publishing group.

Among the other books he has compiled for Pen & Sword are Bf-109 in the Flight Craft series and for Tank Craft he has written extensively on the T-34, the Panzer I and II, the Centurion and Chieftain Main Battle Tanks as well as the Russian T54/55.

I want to thank Casemate Publishers for this review sample they sent me and the folks at Pen & Sword also.

All Pen & Sword titles can be seen on Casemate's site at:
www.casematepublishers.com