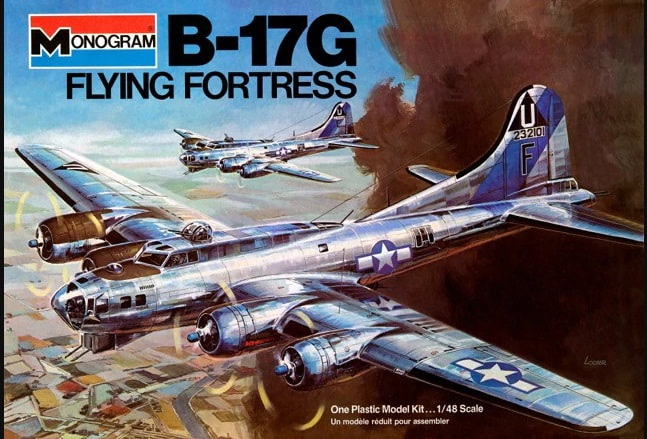 The Boeing B-17 Flying Fortress is a four-engine heavy bomber developed in the 1930s for the United States Army Air Corps (USAAC). Competing against Douglas and Martin for a contract to build 200 bombers, the Boeing entry (prototype Model 299/XB-17) outperformed both competitors and exceeded the air corps' performance specifications.

Although Boeing lost the contract (to the Douglas B-18 Bolo) because the prototype crashed, the air corps ordered 13 more B-17s for further evaluation. From its introduction in 1938, the B-17 Flying Fortress evolved through numerous design advances, becoming the third-most produced bomber of all time, behind the B-24 and the multirole Ju 88.

The B-17 was primarily employed by the United States Army Air Forces (USAAF) in the daylight strategic bombing campaign of World War II against German industrial and military targets.

complemented the RAF Bomber Command's nighttime area bombing in the Combined Bomber Offensive to help secure air superiority over the cities, factories and battlefields of Western Europe in preparation for the invasion of France in 1944.

The B-17 also participated to a lesser extent in the War in the Pacific, early in World War II, where it conducted raids against Japanese shipping and airfields.

From its prewar inception, the USAAC (by June 1941, the USAAF) promoted the aircraft as a strategic weapon; it was a relatively fast, high-flying, long-range bomber with heavy defensive armament at the expense of bombload. It developed a reputation for toughness based upon stories and photos of badly damaged B-17s safely returning to base.

The B-17 developed a reputation as an effective bomber, dropping more bombs than any other U.S. aircraft in World War II. Of the 1.5 million tonnes of bombs dropped on Nazi Germany and its occupied territories by U.S. aircraft, 640,000 tonnes were dropped from B-17s. In addition to its role as a bomber, the B-17 was also employed as a transport, antisubmarine aircraft, drone controller, and search-and-rescue aircraft.

As of May 2015, ten aircraft remain airworthy. None of those ten were ever flown in combat. Dozens more are in storage or on static display. The oldest of these is a D-series flown in combat in the Pacific and the Caribbean.

Monogram is a prolific model company that makes all manner of model subjects in the popular scales. At the time that this kit was issued they were in Morton Grove, IL.

The kit came in a large shrink-wrapped tray and lid type box.

The box art shows two B-17G's flying over the countryside through a cloud of thick smoke.

Both aircraft are bare metal with olive-drab anti-glare panels and inner surfaces of the engine cowlings. They have wide diagonal blue stripes across the rudder.

On the one in the foreground there is a black triangle high on the rudder with a white letter U on it, above the serial no. 232101 with a black letter F outlined in white below that. It has black wing and rudder leading edges and 8 black bombing mission marks on the nose.

The B-17G in the background is marked the same.

​It says here that the kit makes up to be 19 3/16" long and has a 25 15/16" wingspan. The kit includes 5 flight crew and ground crew figures, parts for a detailed bomb cart complete with bombs and a 4-page, full color folder telling how to build a diorama by Shephard Paine.

The other side panel has 7 color walk-around type photos of the model made up showing interior and exterior details.

​The end of the box says the kit is for modelers 13 through adult.

The parts trees are not alphabetized or illustrated in the instructions. They do have part number tabs next to the parts on them however.

The kit holds 3 large silver-gray parts trees, a black tree, the decals, instructions and the folder about how to do a diorama by Shep Paine.

The instructions consist of a staple bound booklet of 12 pages in 9" x 11" page format.

Page 1 has a black and white photo of the model made up in the box art scheme with 5 crew figures standing in front of it.

Page 10 has a 4-view of the box art scheme (already described above.

It's nickname is "El Lobo II". It served with the 457th Bomb Group's 748th Squadron  no, 130 in Glatton, England. Lt. Kelly took her over Bernberg, an aircraft assembly plant, on 2nd November, 1944. Ball turret gunner Staff Sergeant Bernard F. Silek was kept busy that day by several of those massed Lufwaffe "wolfpack" attacks, as was every other 457th gunner on this the group's worst mission.

The original "El Lobo" was piloted by Lt. Cornelius Woolf & crew after their arrival overseas on 21 January, 1944 - just in time to take part in the 8th Air Force's "Big Week" offensive against German industry one month later.

Page 11 has a 4-view of a B-17G nicknamed "Chow Hound". It is bare metal with a red vertical band on the rudder with a white triangle with a white letter A on it over a yellow serial no. 231367. A yellow fuselage code of RL G is on it's sides. It has red elevator leading edges and green wing tips.

This aircraft flew out of Bassingbourn, England assigned to the 322nd Squadron of the 91st Bomb Group with Lt. Jerry Newquist at the controls. Newquist named her "Chow Hound" and had painted on the nose the famous Walt Disney cartoon character "Pluto". Crew chief Julian Murdock kept "Chow Hound" airborne for over 30 missions, and she was not turned back once due to mechanical failure.

"Buck-wheat's" Baily kept them from getting lost on those missions through his dead reconing navigation, thus earning him the nickname "The D.R. Devil". Lt. Jack Thompson and crew took over "Chow Hound" after Newquist's crew had completed their tour of duty with the 8th Air Force and returned home.

Luck ran out for Thompson's crew when over Caen, France. "Chow Hound" was shot down on August 8th, 1944 - four out of Thompson's nine man crew were killed. Information for this B-17G BO was supplied by Jerry Newquist (now a 727 captain for United Air Lines) and by "Buckwheat's" Bailey (now a cattle rancher). 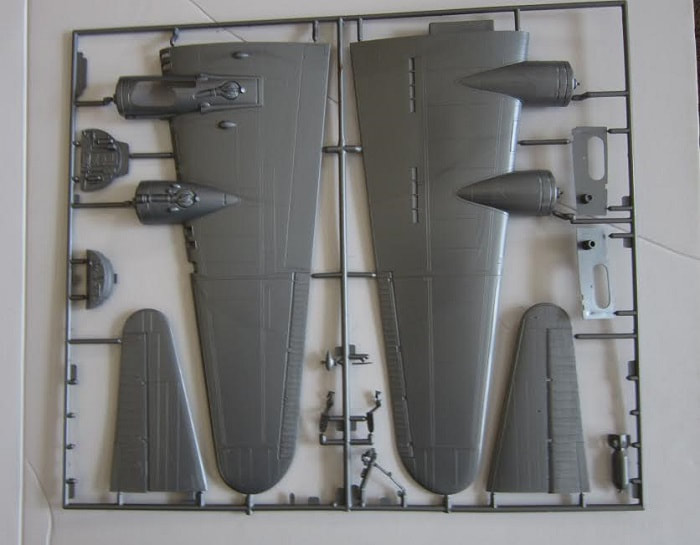 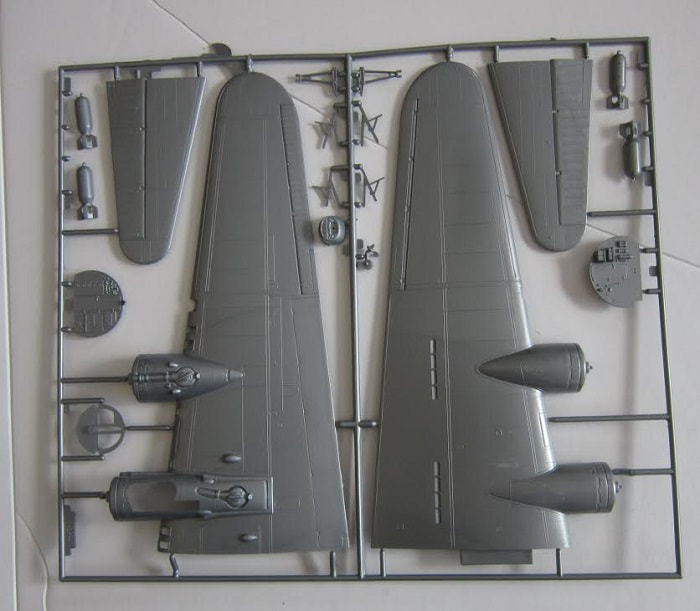 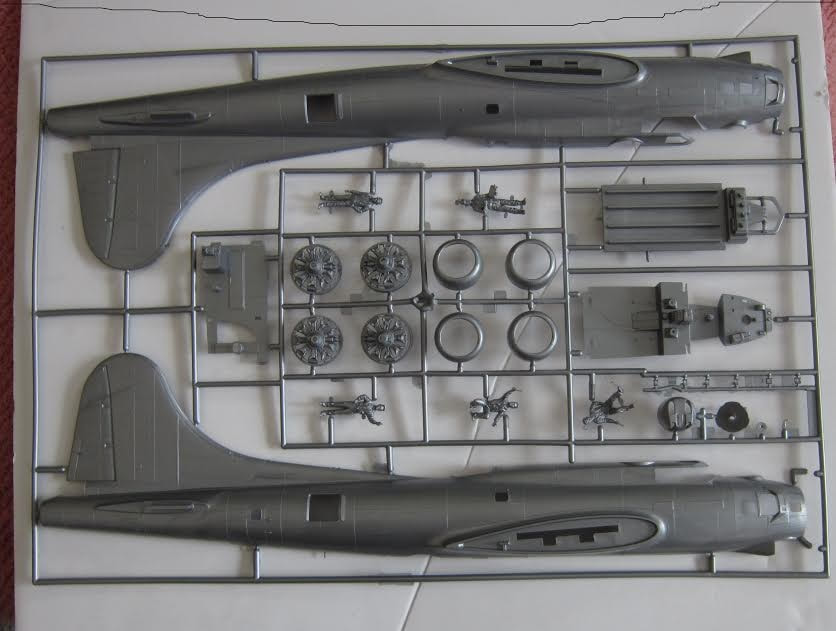 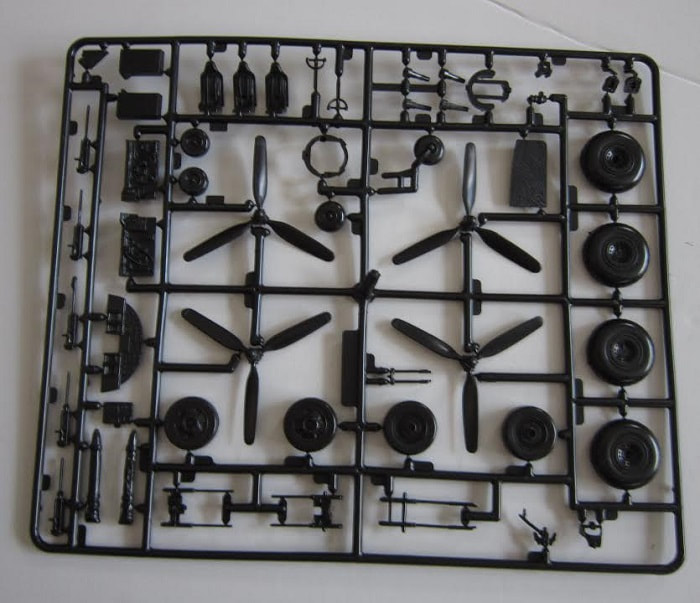 The clear parts tree include the wind screen, turret tops, nose glass and ball turret as well as many other parts. 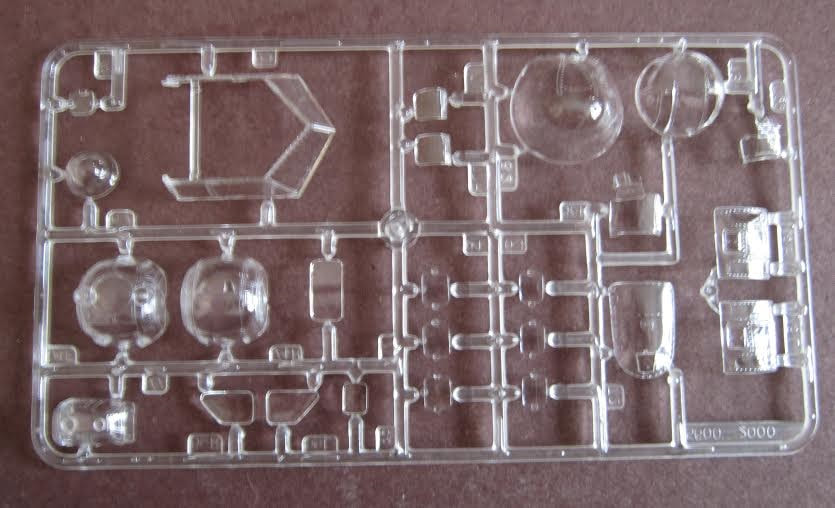 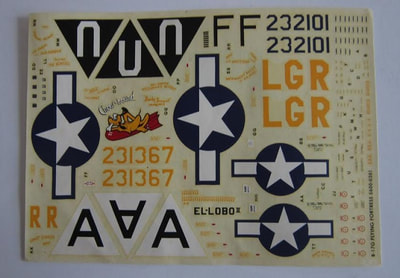 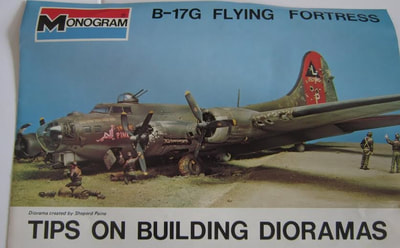 This is a neat highly detailed kit of the B-17G with great raised panel lines.

​I purchased my kit at my local hobby shop back in the 70's.