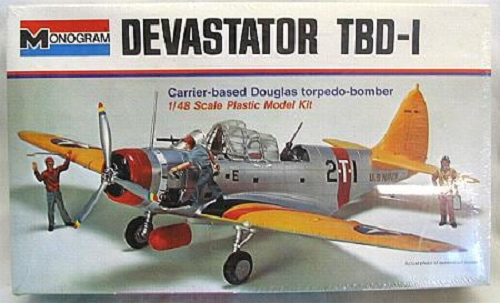 I paid a whopping $2.26 for mine back in the 70's at the K-Mart store that went out of business here in town at the mall.
​HISTORY:

In 1934, the U.S. Navy Bureau of Aeronautics requested designs for a new torpedo plane. The Douglas TBD-1 met all the requirements for replacing the planes in use of that time and was accepted.

In 1937, the TBD-1 Devastators  went into Navy service as the first all-metal, low-wing aircraft with hydraulically powered folding wings. At that time, it was the most modern and efficient aircraft of its type. It could perform steep reversals of a low air speed and with perfection, execute the high speed dives used during the early part of the torpedo run.

The TBD-1 carried a crew of three - a pilot, torpedo officer or bombardier, and rear gunner/radio operator. They sat in tandem under a continuous transparent canopy which had sliding sections over each cockpit. For torpedo missions in WWII, only a crew of two was used.

The Devastator served as two different versions, a torpedo plane and bomber. As a torpedo plane the doors under the front of the fuselage were closed and the torpedo was held by a special cradle. While as a bomber, the doors were opened to enable the bombardier to sight through the windows in the bottom of the plane.

Powered by a Pratt & Whitney R-1830-64 engine the TBD-1 had a range of 435 miles with its torpedo. Like all naval aircraft for this period, it had flotation bags in the wings that could displace 3,431 pounds of sea water.

Devastators saw action in the Pacific on February 1, 1942. In the Battle of the Coral Sea, the SBD's had their greatest success by aiding in the sinking of one carrier and seriously damaging another. On May 8, 1942 during the Battle of Midway, the Douglas TBD's saw their last major action.

Following that, TBD's were used for training new pilots and mechanics or as practice planes for fire-fighting crews.

This accurately detailed model was designed from authentic drawings and photographs. Technical information was supplied by McDonnell Douglas and the U.S. Navy.
​THE KIT:

Monogram is an old prolific model company based in Morton Grove, IL. They manufacture all manner of model subjects in the popular scales. In later years they have become associated with Revell.

This kit came in a shrink-wrapped flimsy tray and lid type box. My kit is very crushed.

The box art shows a color photo of the model made up with 2 ground-crewmen and a pilot standing by it. Posed against a white background.

The TBD-1 is bare-metal, with a red cowling and yellow wings and tail it has a small black letter "E" under the cockpit and a fuselage code of black 2 white -t- and black I over a red fuselage band. Black U.S. Navy under the elevators and a small black 0300-TBD-1 high near the tip of the rudder, black wing walks and is carrying a torpedo that is white with a red nose.

The pilot is standing near the tail he wears a yellow life vest, pilot helmet with goggles and is carrying a board with some paperwork on it in his left hand and has his right hand on his pistol holster. He has gray pants and a green shirt.

One side panel of the box has 3 color walk around shots of the model made up. Two are the box art scheme and the third is of a TBD-1 that is overall blue with red and white horizontal stripes on the rudder flap sides and round U.S. stars. It has a black fuse code of 8-T-I.

​The other side panel has a one-paragraph history of the TBD-1, Over the copyright date of the kit of 1974 and Monogram's address in Morton Grove, IL. Made and printed in the USA, followed by a color photo of the model made up in the box art scheme with its wings folded and a repeat of the kit's features.

The trees are not cello bagged. They fit the box tight in all 4 directions. Trees are not alphabetized nor illustrated in the instructions. They do however have part number tabs next to the parts on the trees. This means careful search of the trees to get the right parts for each assembly. Bad move Monogram! 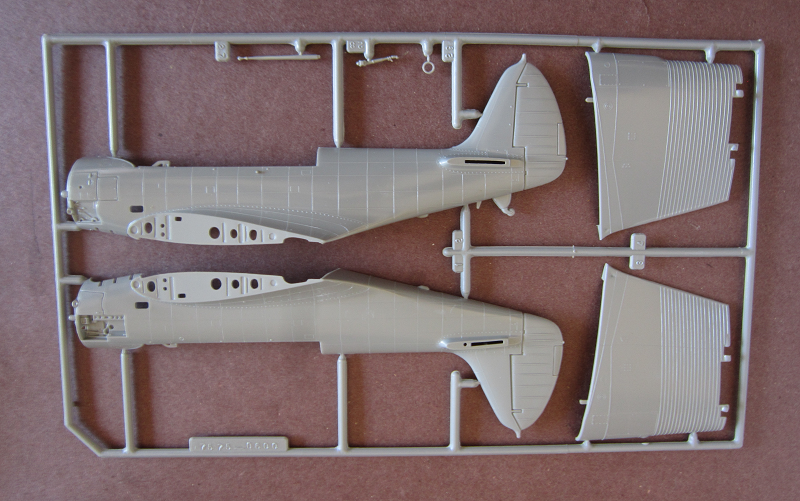 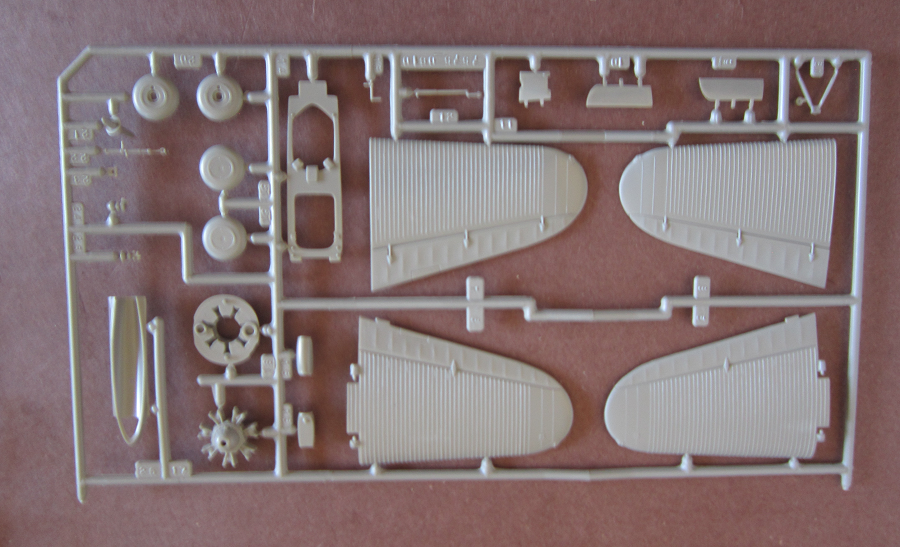 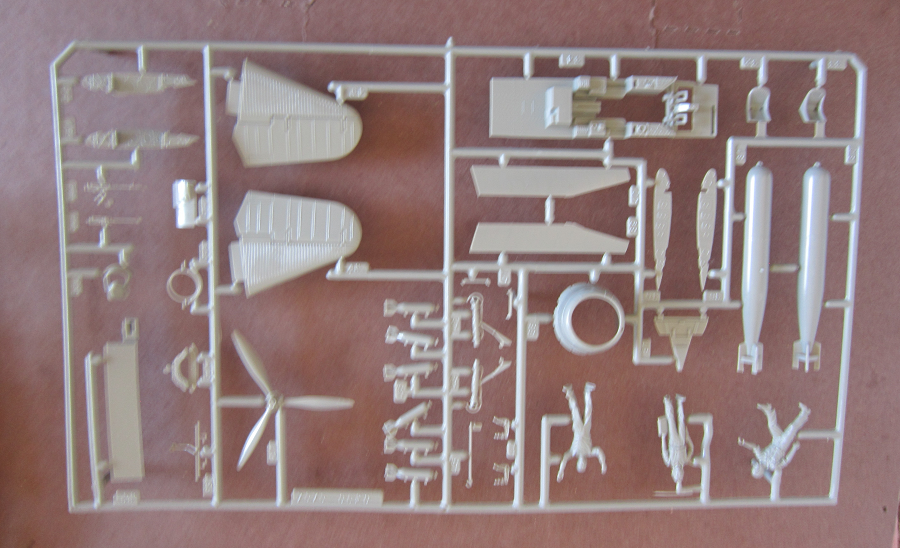 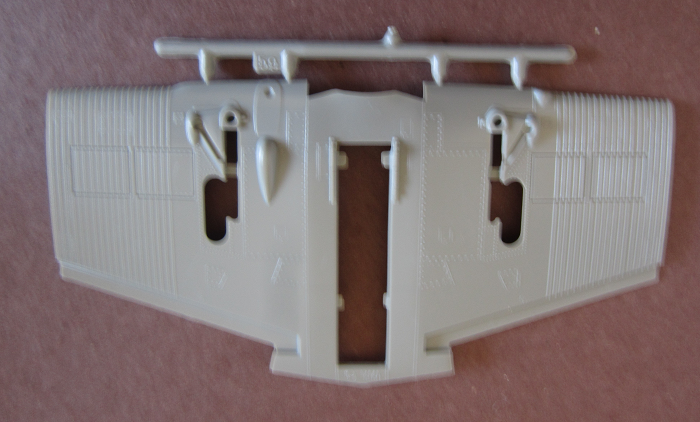 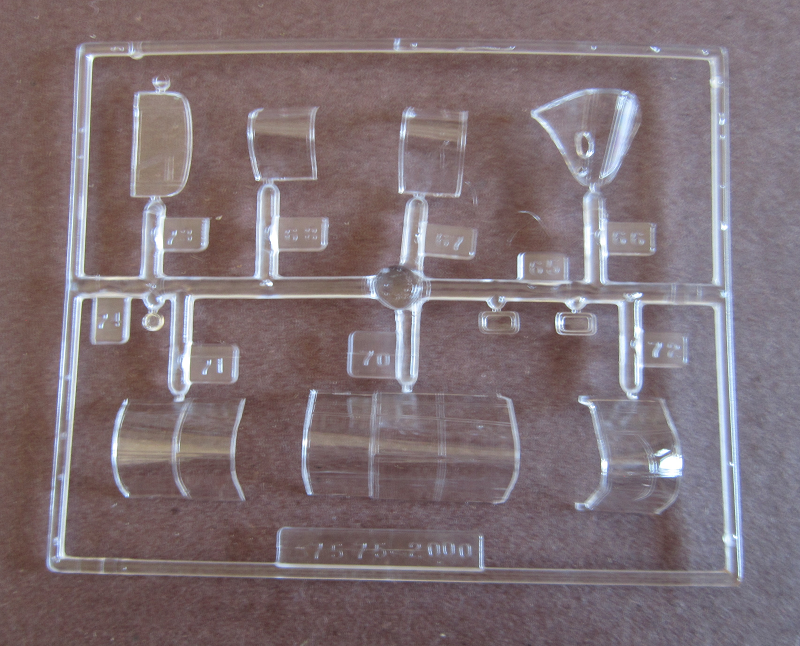 The decal sheet for the 2 versions in the kit. 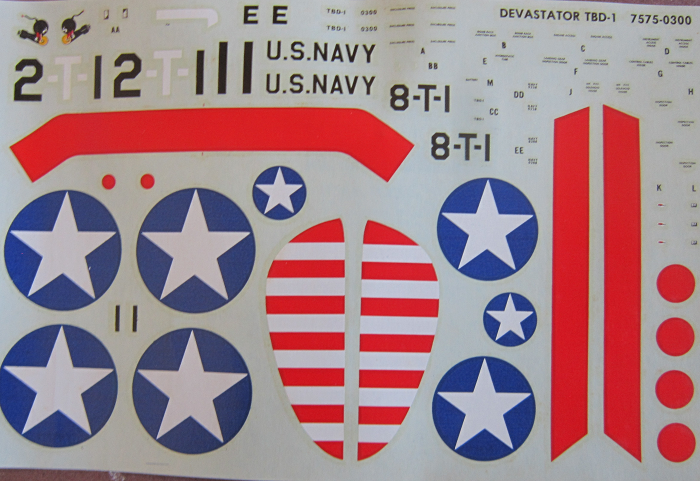 ​The instructions consist of a single sheet that accordion-folds out into 8 pages in 11" x 6 1/2" page format.

Page 1 has the history of the TBD-1 over Monogram's address in Morton Grove, IL, the copyright date of the kit of 1974 and MADE IN USA.

Page 2 though 6 gives a grand total of 15 assembly steps.

Page 7 & 8 is the painting and marking instructions, showing three 3-views:

1. The box art scheme (already described above) It is a TBD-1 with VT-2 aboard the U.S.S. Lexington.

2. A TBD-1 that is blue gray above a light gray undercarriage. It has very small black lettering on the top of the rudder TBD-1 NAVY 0308 over a narrow white bar. It is a TBD-1 with VT-6 U.S.S. Enterprise in what is said to be Combat Zone markings.

3. A TBD-1 in medium-blue over light-gray undercarriage, with black fuselage no. 8-T-1 and red and white horizontal bars on the rudder flap sides. It is with VT-2 U.S.S. Hornet in what is called pre-war markings.

Propeller blade colors are shown (blue or black with blue, yellow and red tips and colors for the torpedo (gray with a red nose).

The diorama instructions by Sheperd Paine is next. It is a single sheet printed on both sides in 8 1/2" x 11" format.

​It shows a diorama of a TBD-1 crashed into the sea. Two crewmen are helping each other to a inflatable life raft. Very detailed as to how Sheperd did it. 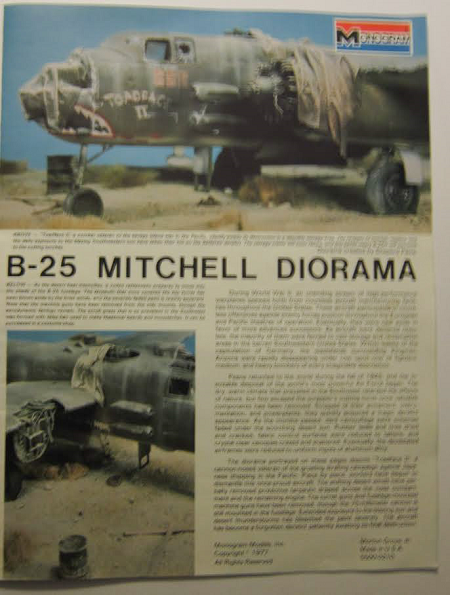