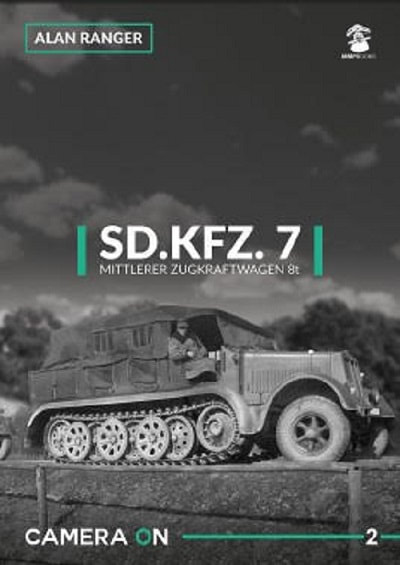 MSRP: $25.00
During WW2, the German armed forces were the greatest user of half-track vehicles. Such vehicles were used in the Wehrmacht, Luftwaffe and Waffen-SS, where they served as personnel carriers, tractors, combat engineering vehicles, as well as self-propelled carriages for anti-aircraft guns.

The SD. Kfz. 7, Mittlerer Zugkraftwagen 8t (middle half-track vehicle 8 tons) was designed in 1932 by Krauss Maffei and by 1937, the ultimate Km m 11 model was introduced.
Approximately 13,600 units were produced until production ceased in 1945, including about 200 built under license by BREDA in Italy and even a copy by Vauxhall in the UK.

The book presents a collection of 157 black and white photographs of different versions of the tractor from the private archives of German soldiers. The photographs depict vehicles serving on different fronts and being utilized in several roles.

Photos of most production versions (6, 7, 8, 9, 10 & 11) are shown, Including self-propelled anti-aircraft guns and artillery tractors.

This profusely illustrated photo albums includes mainly previously unseen pictures, many from private sources in Germany. Whatever the rules might have said, German soldiers took many photos, and these are the basis for this book.

There is a page that has side view line drawings of all 6 versions of the Sd.Kfz. 7

The cover art is a black and white photo of a Sd.Kfz. 7 crossing a bridge with a dark sky in the background.

The back cover shows the covers of 4 other MMP books that are authored by Alan Ranger: Sd.Kfz. 6, Dunkirk 1940 Through German Eyes, German Horse Power - Horse Drawn Elements of the German Army and Sd.Kfz. 10.

MMP is based in the UK. They have all their books printed in Sandomierz, Poland by their associate Stratus in English.

I want to thank Casemate Publishing, who sent me this review sample and also Roger Wallsgrove Editor-in-chief of MMP for this sample.

Casemate is the North American distributor of MMP/Stratus books and all their titles can be seen on their web site at:
www.casematepublishing.com