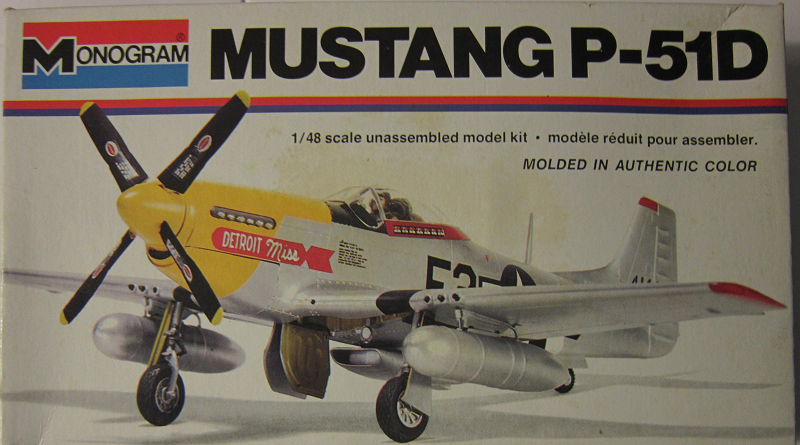 My kit has a copyright date of 1977, which is the first release. It has been re-released 8 times since. A couple times as a Reno Racer. A fellow in Australia has the 1978 re-release kit no. H-31 for $15.00 Australian dollars.
​HISTORY:

The prototype NA-73X air frame was rolled out on 9 September 1940, 102 days after the contract was signed, and first flew on 26 October.

The Mustang was originally designed to use the Allison V-1710 engine, which, in its earlier variants, had limited high-altitude performance. It was first flown operationally by the RAF as a tactical-reconnaissance aircraft and fighter-bomber (Mustang Mk I).

The replacement of the Allison with a Rolls-Royce Merlin resulted in the P-51B/C (Mustang Mk III) model and transformed the Mustang's performance at altitudes above 15,000 ft, allowing the aircraft to compete with the Luftwaffe's fighters.

The definitive version, the P-51D, was powered by the Packard V-1650-7, a license-built version of the Rolls-Royce Merlin 66 two-stage two-speed supercharged engine and was armed with six .50 caliber (12.7 mm) M2/AN Browning machine guns.

From late 1943, P-51B's and Cs (supplemented by P-51D's from mid-1944) were used by the USAAF's Eighth Air Force to escort bombers in raids over Germany, while the RAF's Second Tactical Air Force and the USAAF's Ninth Air Force used the Merlin-powered Mustangs as fighter-bombers, roles in which the Mustang helped ensure Allied air superiority in 1944.

The P-51 was also used by Allied air forces in the North African, Mediterranean, Italian and Pacific theaters. During World War II, Mustang pilots claimed to have destroyed 4,950 enemy aircraft.

At the start of the Korean War, the Mustang, by then re designated F-51, was the main fighter of the United Nations until jet fighters, including North American's F-86, took over this role; the Mustang then became a specialized fighter-bomber.

Despite the advent of jet fighters, the Mustang remained in service with some air forces until the early 1980's. After the Korean War, Mustangs became popular civilian warbird and air racing aircraft.

Monogram is a old model company base in Morton Grove, IL. They manufacture all manner of model subjects in the popular scales. In recent years they have become associated with Revell.

The box art shows a P-51D posed against an all-white background, similar to how Tamiya does the majority of their box arts too.

It is bare-metal with a yellow nose and spinner, black propeller with yellow tips and logos on the blades. It has a red bomb with white "Detroit Miss" on it on the side of the nose, a black fuselage of E2 star D, red serial no 414164 on the rudder. It has black and white invasion stripes under the rear of the fuselage, red wing tips, a black surround to the cockpit with 7 white kill marks on it, black stripe around the wings and elevators.

The kill marks are not on the decal sheet.

One side panel of the box has 2 color photos of the model made up.

​The other side panel has the kit features as: Kit is of an 8th Air Force Mustang. It includes highly detailed pilot and cockpit with instruments, controls, radio and gunsight. Canopy and cooling vent can be posed open or closed. Wing panel lifts off to show weapons and ammo bay. Engine details can be seen with lower cowling removed. Cement and paint not included.

​This is over the copyright of the kit of 1977 and Monogram's address in Morton Grove, IL, MADE & PRINTED IN USA, followed by a color photo of the model in profile.
​WHAT'S IN THE BOX:

The instructions consist of a single sheet in 8 1/2" x 11" format, printed on both sides and folded several times to fit the box.

The face side begins with Monogram's address in Morton Grove, IL, the copyright of 1977 above the history of the Mustang and READ BEFORE YOU BEGIN general instructions over 4 of the assembly steps.

The reverse side continues with a total of 7 assembly steps. The bottom of the page has a 4-view of the box art scheme (already described above).

Trees are not alphabetized or illustrated in the instructions. They do however have part number tabs next to the parts on them. 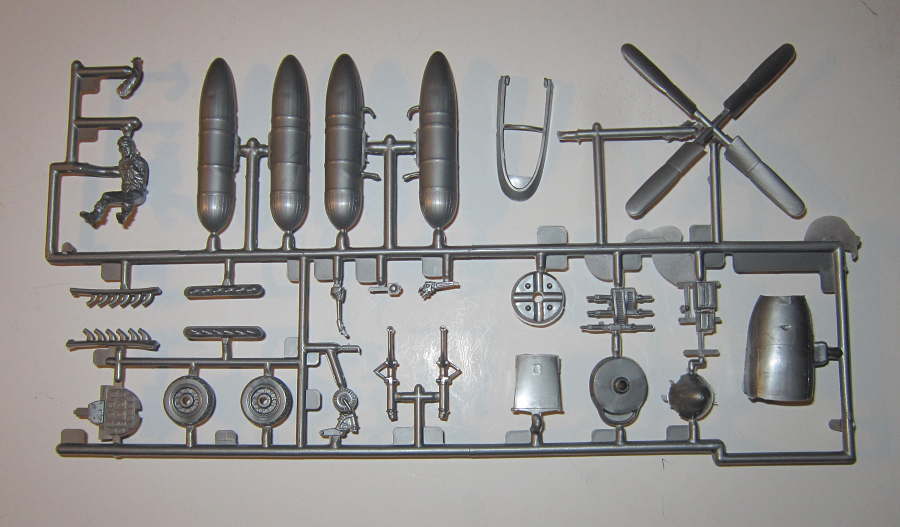 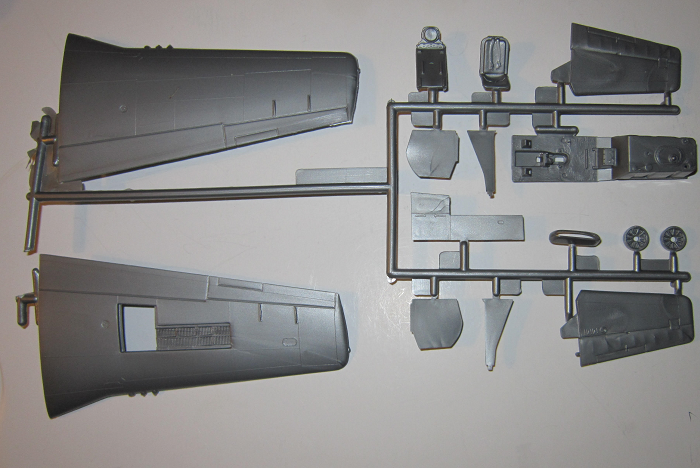 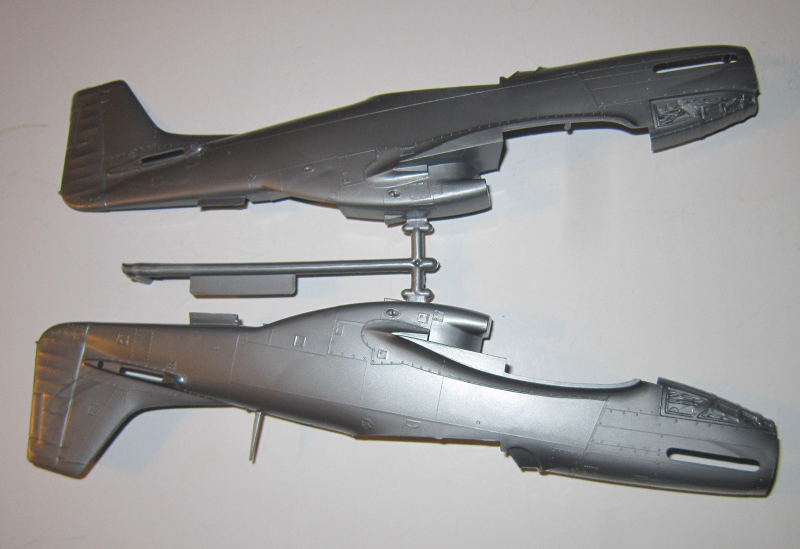 ​A loose silver-gray part is the wing bottoms.

The finale plastic parts are the 2 piece canopy. 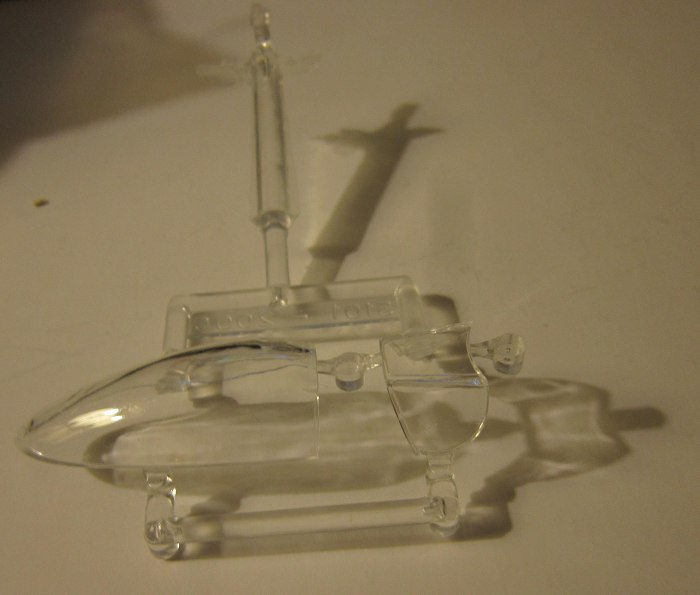 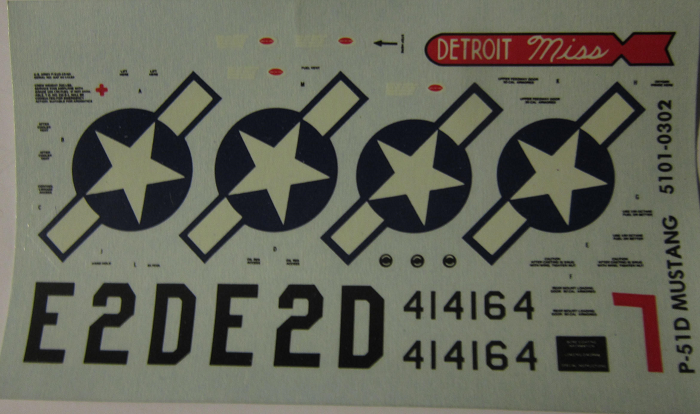 ​Parts fit the box tight in all 4 directions.