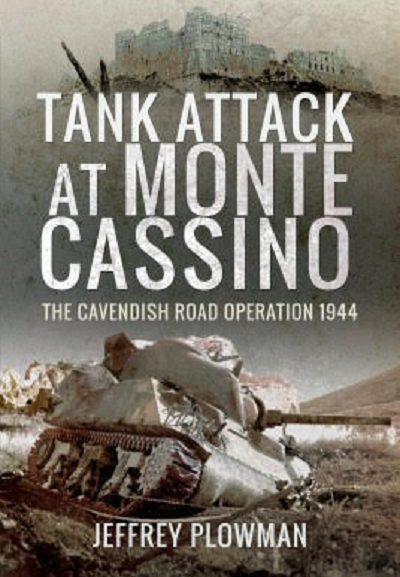 MSRP: $42.95
​Early morning, 19 March 1944 – tanks manned by New Zealanders, Indians and American launch a daring attack along a narrow mountain track on German positions north of Monte Cassino. So began one of the most audacious Allied attempts to break through the Gustav Line and advance on Rome – and it almost succeeded.

Yet the extraordinary story has seldom been told, and it has never been told before in the vivid detail Jeffrey Plowman brings to this new account.

Using operational orders, combat reports, unit diaries, post-battle photos from private and public archives and the graphic personal accounts of those who took part, he describes the construction of Cavendish Road and the course of the entire operation that followed. The planning for the attack and the men involved are described in a gripping and clear-sighted way, as is the attack itself – its initial rapid success and its ultimate failure.

Eighty years later, Jeffrey Plowman reveals exactly what happened and shows how and why this bold thrust against the German strong points at Monte Cassino, which could have turned the course of the battle, ended in retreat. His book also features a visitor’s guide from the village of Caira to Massa Albaneta, linking each spot with the events described in the narrative.

This book is an in-depth account of the daring Allied tank attack launched along Cavendish Road during the third battle of Monte Cassino in 1944. It tells the graphic description of the construction of Cavendish Road, with vivid detailed depiction of each stage of the attack and the aftermath.

The book is based on dramatic recollections of eye-witnesses and after-action reports. It features a visitor’s guide to Cavendish Road and the sites mentioned in the narrative. It is a fascinating insight into the experience of armoured warfare eighty years ago.

Jeffrey Plowman is a research biochemist by profession, who has had a keen interest in military history for over thirty-five years. He has made a special study of New Zealand armour and armoured units and has published nineteen books as well as many articles and chapters on the subject.

Among his most recent publications are: “War in the Balkans”, “The Battle for Greece and Crete 1940-1941”, “Monte Cassino: Armoured Forces in the Battle for the Gustav Line and Greece 1941” and “The Death Throes of Blitzkrieg”.

Pen & Sword Books Ltd. Is based in the UK.

It holds 132 pages of just text, 22 pages are blank, there are 3 maps, 59 black and white wartime photos of the Monte Cassino area and 34 color photos of how the area looks today. One color photo is of a veteran of the battle visiting the area after the war.

The book has a paper jacket.

The cover art of the jacket shows a black and white wartime photo of the damaged monastery on a hill at Monte Cassino above a photo of a brewed up destroyed Sherman tank.

The black and white photos mainly show the terrain at Monte Cassino, a few are aerial shots. Twenty-three photos are of brewed-up Shermans. They really took a beating in this battle. There are a few photos of troops. One of these shows a horse cavalry unit moving down a road and another shows 2 German captives.

This is great reading material and good photos. It will be of interest to modelers and military historians alike,

I wish to sincerely thank Casemate Publishers, the North American distributor of Pen & Sword books. All Pen & Sword book titles can be viewed on Casemate’s website at:
www.casematepublishers.com