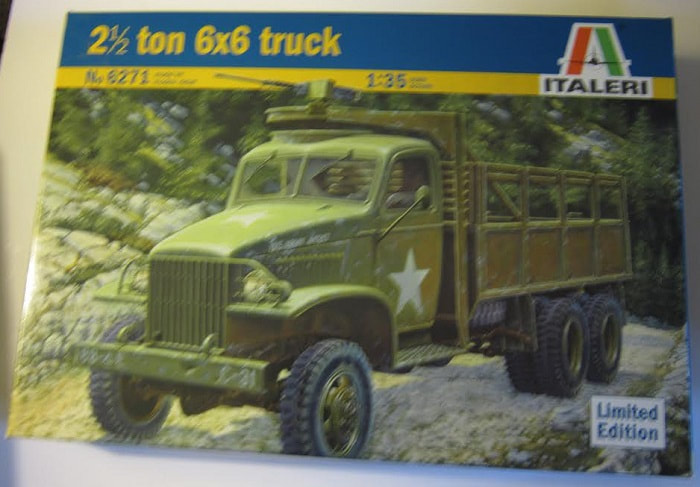 The GMC CCKW was 2½-ton 6x6 U.S. Army cargo truck that saw heavy service in both World War II and the Korean War. The original "Deuce and a Half", it formed the backbone of the famed Red Ball Express that kept Allied armies supplied as they pushed eastward after the Normandy invasion.

The CCKW came in many variants, including open or closed cab, long wheel base (LWB 353) and short (SWB 352), and over a score of specialized models. It began to be phased out with the deployment of the 6×6 M35 in 1950, but remained in active U.S. service until the mid-1960s. It is related to the Chevrolet G506, built at the same factory.

In 1939-1940 the US Army Ordnance Corps was developing  2 1⁄2-ton (2,268 kg) load-rated 6×6 tactical trucks that could operate off-road in all weather. General Motors, already supplying modified commercial trucks to the Army, modified the 1939 ACKWX–built for the French Army–into the CCKW.

The General Motors design was chosen by the Army and went into production at GM'S Yellow Truck and Coach division's Pontiac, Michigan plant alongside 6×4 CCWs. Later they were also manufactured at GM's St. Louis, Missouri Chevrolet plant.

Italeri is an old prolific model company based in Italy. They make all manner of model subjects in the popular scales.

It is overall olive-drab with a large white star on the cab doors and atop the hood. The sides of the hood have a white U.S. ARMY 41317 on them. The front bumper has a white 8B-TRIANGLE E on the left side and a white C-31 on the right.

One side panel of the box has Italeri's web address, MADE IN ITALY and their street address in Italy, followed by one paragraph histories of the truck in 6 languages, including English. These paragraphs are labeled with color illustrations of the flags of the countries that speak those languages.

The other side panel repeats the addresses. It then says that the kit does not contain paint or adhesive and is for modelers over the age of 10 in multiple languages, including English.

The copyright of the kit is given as 2005, followed by a suggested listing of Model Master brand paints and 2 color walk around photos of the truck made up, showing the side of the cab and the front grill.
​WHAT'S IN THE BOX:

This kit holds 2 olive-drab trees and a clear tree that are not cello bagged, the decal sheet and the instructions. 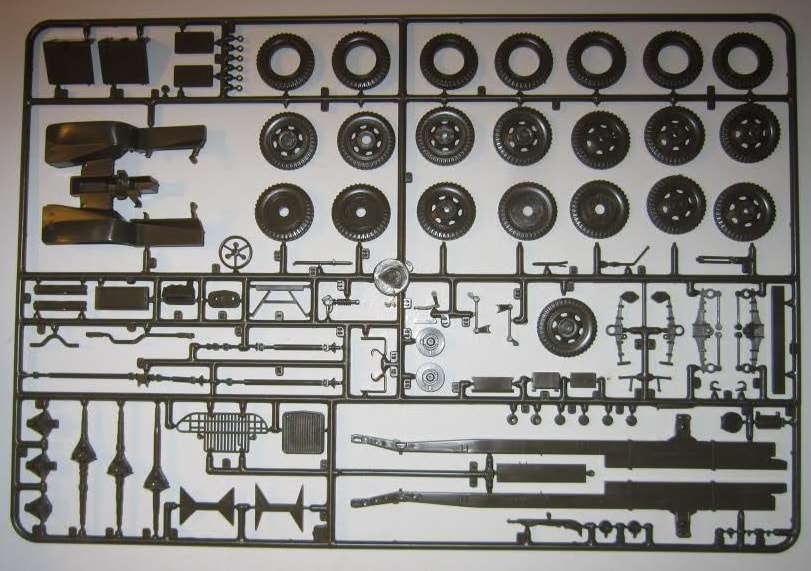 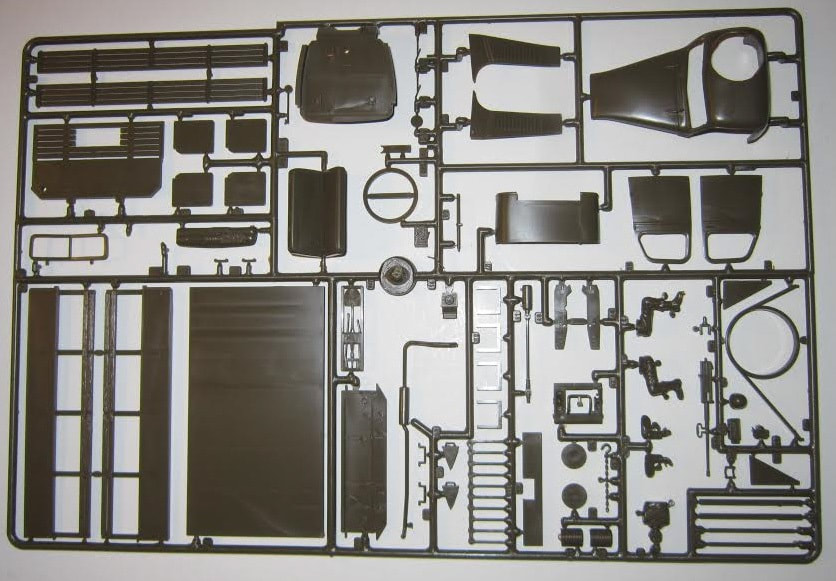 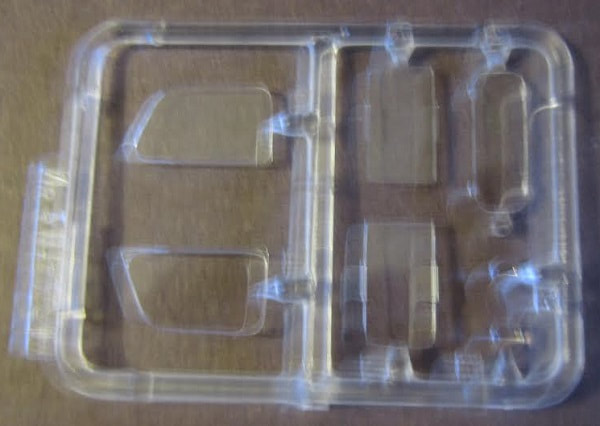 ​The decal sheet and 2 instruction sheets complete the kits contents. 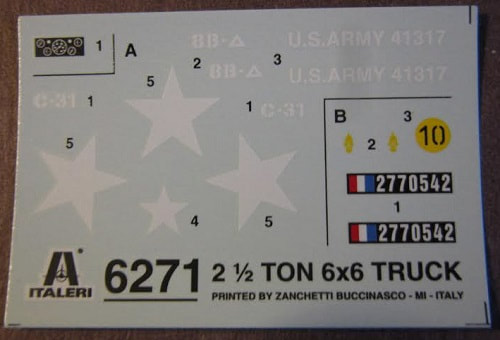 ​The first instruction sheet consists of a single sheet that accordion-folds out into 8 pages in 7 1/2" x 10" page format.

Page 1 has Italeri's stree address in Italy at the top, over the history of the truck in 11 languages, including English.

Page 2 begins with "ATTENTION" about the kit in 4 languages, including English, over a suggested listing of Model Master brand paints and the parts trees illustrations.

Page 3 through 7 give a grand total of 11 assembly steps.

Page 8 has two 4-views of schemes: the box art sheme, which is a truck with the U.S. Army 34 Infantry Division, 1944 and a truck with the French Army, 101st Regiment d.Infanterie, 1976 in overall olive-drab.

The bottom of the page has the decal application instructions in 8 languages, including English.

A single second 7 1/2" x 10" sheet has "Important information concerning this kit" in 20 languages on one side, including English.

The reverse side has a customer service coupon on it.

This is a nicely detailed kit. I only wish it had a cargo load included.