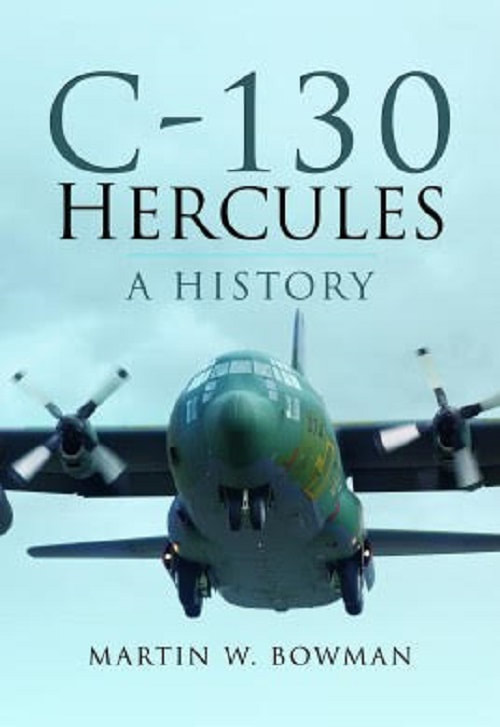 MSRP: $39.95
​Designed in response to a 1951 requirement, the C-130 Hercules is the most successful military airlifter ever built. Since it first flew in prototype form on 23 August 1954, more than 2,100 have been produced in over eighty versions. Across its variants, the Hercules serves more than sixty air forces, as well as many civilian cargo operators, in a multiplicity of roles, including air-to-air refueler, gunship, airborne command post, flying hospital and firefighter.

This rugged and easily maintained aircraft entered service in 1956 with the USARF Tactical Air Command. Ten years later the "Charlie 130" was providing the essential logistical support in Vietnam. This period in Southeast Asia was the Hercules' finest hour. Paradrops, airlift and evacuation operations were completed around the clock, often at low level, usually under fire and nearly always in bad weather.

A generation later this "Mr. Dependable" was serving with equal distinction in the Gulf War in the role of airlifter, radio-countermeasures and "Psy-ops" platform, gunship and, once again, "block-buster bomber". The "Herky Bird" or "Fat Albert", as the C-130 is fondly known, has proved a key component in humanitarian relief operations ever since, in all parts of the world.
The incredible success story of the C-130 is far from over. In this book Martin W. Bowman tells the full story of this remarkable aircraft at firsthand.

Martin Bowman is one of Britain's best-known Second World War historians and authors. His previous books have included works such as Legent of the Lancaster, Confounding the Reich, Duxford and the Big Wings, Clash of Eagles, Lost Wings of World War I and numerous titles in the exhaustive Air War series providing extensive coverage of operations carried out on D-Day and during the Market Garden offensive at Arnhem. He lives in Norwich, UK.

The book has a copyright date of 2017. It was printed and bound in India by Replika Press Pvt.Ltd.

It is hard-bound with a paper jacket. There are 212 color photos (including the ones on the paper jacket) and 72 black and white ones in the book.

This book will be of great interest to aviation enthusiasts and modelers alike.

I want to thank the folks at Casemate Publishing who sent me this review sample and also Pen & Sword.

All Pen & Sword titles can be viewed on Casemate's web site at;
www.casematepublishing.com