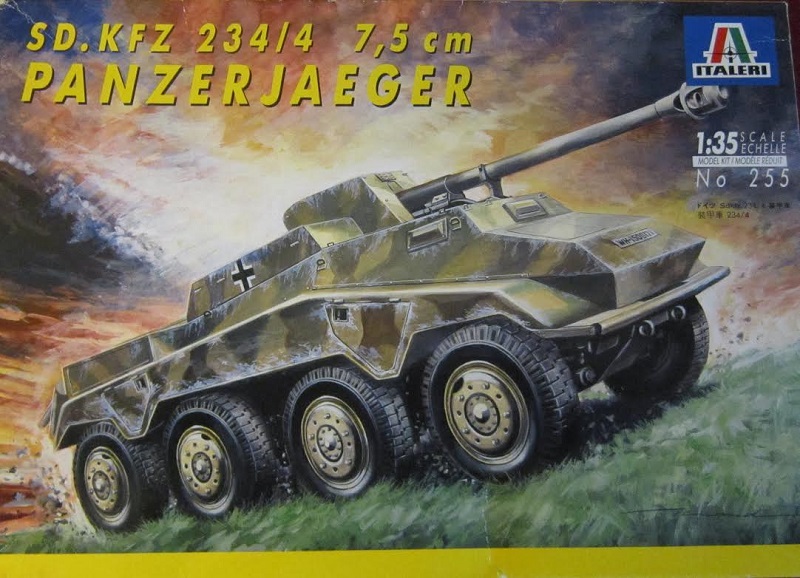 
Germany’s victories at the beginning of WWII in Poland, France and Russia were mainly based on rapidly moving armored divisions which included large numbers of armored cars. They had drivers for forward and reverse driving and were mainly used for reconnaissance purposes.

The Sd.Kfz. 234 (Sondrkraftfanzeug 234, or Special Purpose Vehicle 234), was a family of armored cars designed and built in Germany during WWII.

Armored wheeled vehicles were developed early in Germany, since they were not subject to the restrictions of the Versailles Treaty. The Sd.Kfz. 234 belonged to the ARK series (type designation of the chassis) and was the successor to the earlier Sd/Kfz. 231/232/233 (8-Rad), which belonged to the GS series.

The combat experience of fast-moving, hard-hitting wheeled reconnaissance vehicles during the Wehrmacht's early invasions of Poland and France impressed German military officials, but indicated some deficiencies in existing designs.

A new armored car project was thus undertaken in August 1940, incorporating several lessons from the Wehrmacht's own external operations.[5] The latest Bussing-Nag Sd/Kfz. 232 variant, the Sd.Kfz. 234 was designed later that year. It was to have a monocoque chassis with eight wheels, and an air cooled engine for use in North Africa.
Chassis were built by Büssing-NAG in Leipzig-Wahren while armored bodies were provided by Deutsche Edelstahlwerke of Krefeld and turrets by Daimler-Benz in Berlin-Marienfelde and Schichau of Elbing, with engines from Ringhoffer-Tatra-Werke AG of Nesseldorf.

The vehicle had four-wheel steering and was able to quickly change direction thanks to a second rear-facing driver's seat; the transmission had six forward and reverse gears, with traction over the eight wheels. Power was provided by an air-cooled Tatra 103 diesel engine.

The SdKfz 234/3, produced simultaneously with the 234/1, served as a support vehicle for the reconnaissance vehicles. It had an open-topped superstructure, in which a short-barreled 7.5 cm K51 L/24 gun was installed.

This gun, was intended for use against "soft" targets; however when using a hollow charge shell the penetration power exceeded that of the 5 cm L/60 gun. This variant was produced from mid 1944 to the end of 1944, before switching production to the 234/4.
The final variant produced was the Sd.Kfz. 234/4, which replaced the L/24 gun with the 7.5 cm L/46 PaK 40.
​This was yet another attempt to increase the mobility of this anti-tank gun; however the 234 chassis was stretched to its limits, and it carried limited ammunition (twelve rounds) due to lack of storage space. This variant was manufactured from the end of 1944 to the end of hostilities in 1945.

THE KIT:
Italeri is an older prolific model company based in Italy. They market all manner of model subjects in the popular scales.

This kit came in a long shrink-wrapped tray and lid type box.
The box art shows a Sd.Kfz. 234/4 crossing a grassy field with an explosion in the background.

It is in a base of sand with dark green and red-brown splotches camouflage pattern. Its only markings is a German Black and white cross on the fighting compartment sides and the license plate number WH-1500171 on the front.

One side panel has one paragraph histories of this armored car in English, German, French, Italian, Spanish, Dutch, Norwegian and Danish, each marked with color illustrations of the flags of the countries that speak those languages.

The other side panel continues these history paragraphs in Japanese and Chinese, followed by a listing of Model Master brand paint numbers (we are not told what colors these are though). MADE IN ITALY with Italeri’s street address provided. Kit is said to be not suitable for children under 3, but is designed for modelers 10 and older.

The copyright date of 1983 is shown.
WHAT’S IN THE BOX:
The kit contains 3 dark-green trees of parts, the decal sheet and the instructions. These are all loose and not cello bagged..

The instructions consist of a single sheet that accordion-folds out into 8 pages in 7 ½” x 12”  page format.
Page 1 begins with a black and white photo of the model made up in the box art scheme, followed by the history of the Sd.Kfz. 234/4 in 10 languages, including English.

Page 2 begins with ATTENTION-USEFUL ADVICE in the 10 languages, followed by the parts trees illustrations.

The parts trees are labeled with geometric symbols instead of being alphabetized like in most kits. The smallest of the parts trees, labeled black circle in the parts trees illustrations, has no part numbers molded next to the parts. The other 2 parts trees do have numbers.

The first large dark-green tree, labeled as black square, holds: the sides, top, chassis, floor, fenders, tools and vision flaps etc. (37 parts) 3 of these parts are X’d out in the parts trees illustrations as being excess and not needed to complete the kit. 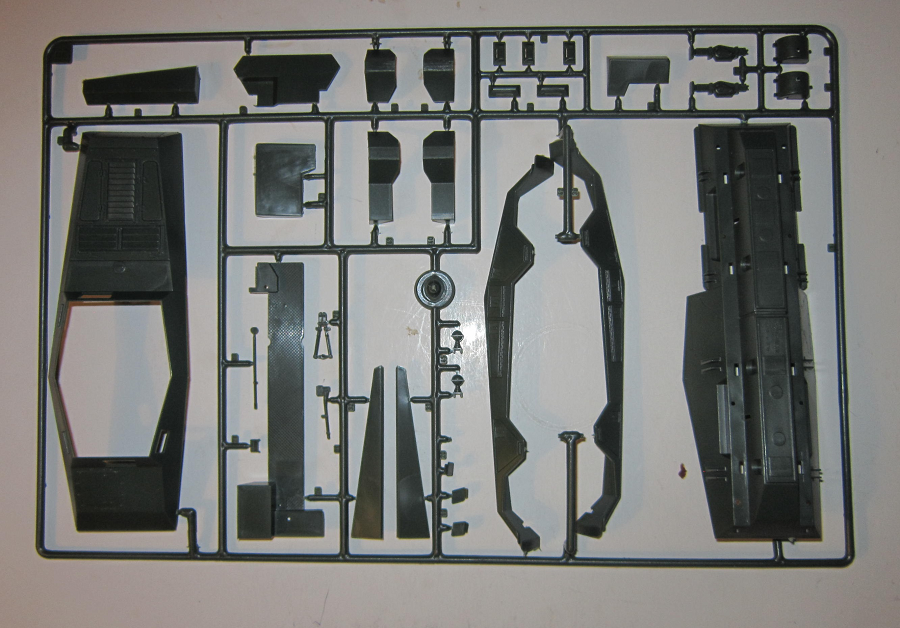 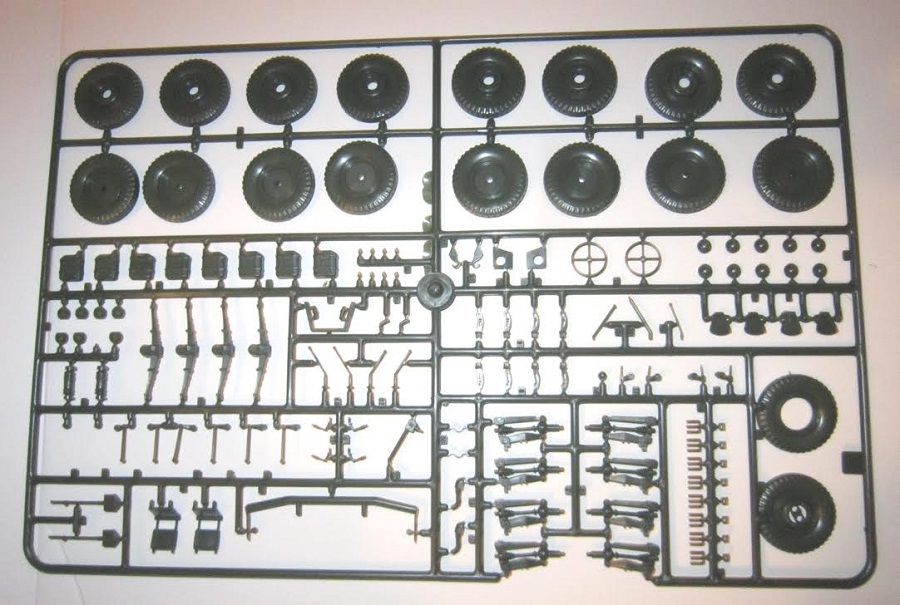 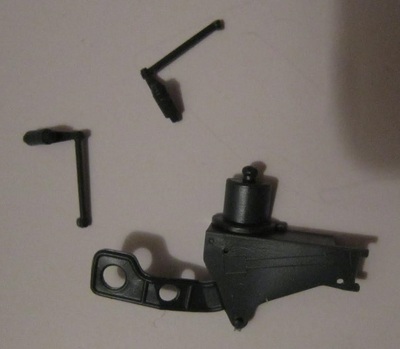 ﻿The decal sheet is next and it only has the box art scheme on it.
No clear parts or crew figures are provided in the kit. 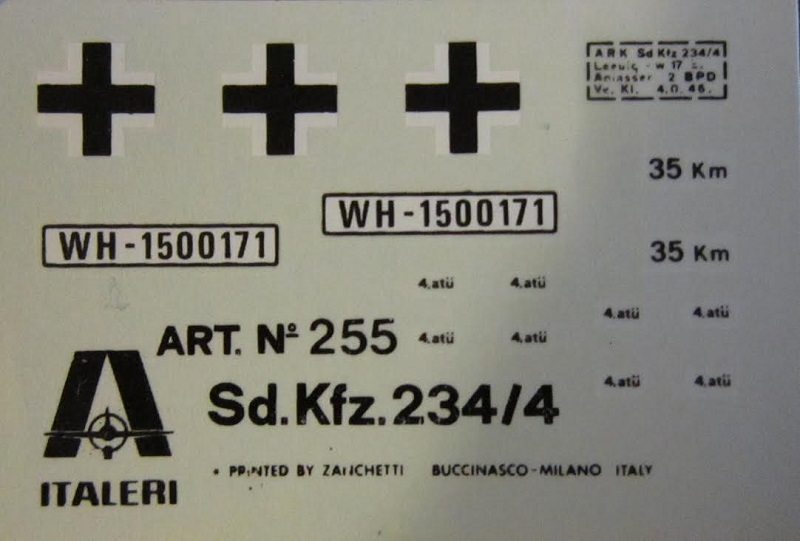 I purchased the after market Elefant brand turned aluminum gun barrel designed for this kit. It is kit no. 35.402G.
Elefant is based in the Czech Republic. The set is in 3 pieces = the turned aluminum barrel and the 2 cast metal muzzle brake parts. 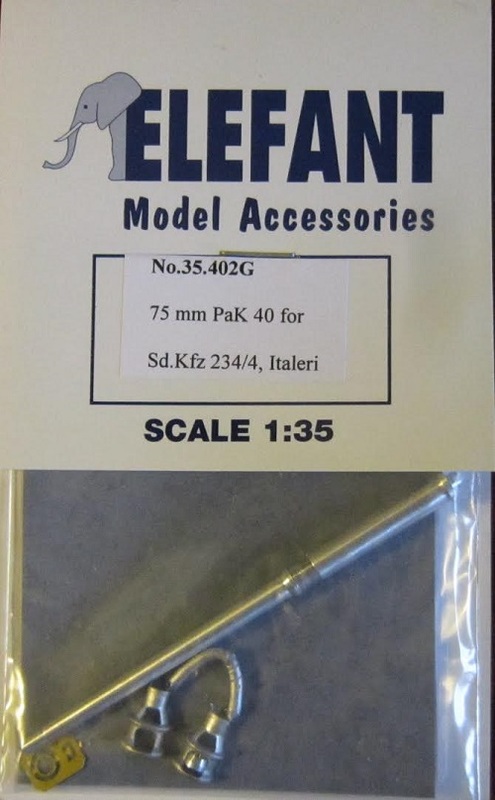 Highly recommended. Kit was courtesy of my wallet at my local hobby shop back in the 80’s.