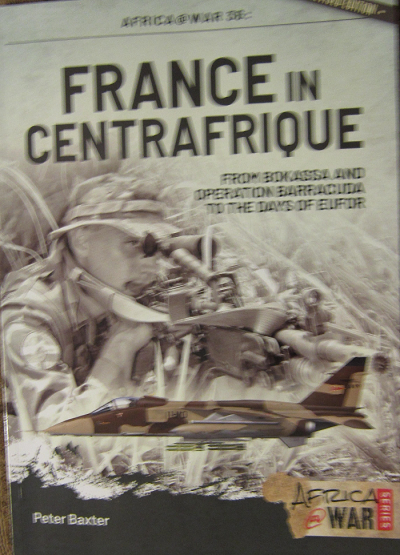 Book Review of France in Centrafrique
From Bokassa & Operation Barracuda
to the Days of Eufor
Revised Edition, Africa@War Series No. 38
Author: Peter Baxter

MSRP: $29.95
​France in Centrafrique (Central Africa), explores the early colonial and post-colonial history of French Equatorial Africa with a particular emphasis on the role of the Central African Republic in WWII and the Free French Movement.

One of the key figures to emerge from this period, and a man who would shape the modern destiny of the Central African Republic, was Jean-Fedel Bokassa. Bokassa served alongside the Free French under General Charles de Gaulle and later in the metropolitan French military as an NCO in Indo-China.

This narrative traces his ascent from these humble beginnings to his position as one of the region's most notorious dictators, exploring both his excesses of violence and personal aggrandizement and the role played by France and the wide-reaching Focart intelligence network in his rise and fall.

Baxter examines the past and present relationship of France with her erstwhile African colonial possessions, giving substance to the cause and effect of the many French interventions and the play of various individual personalities, both French and African, and how this has affected the current complexion of the region and its ongoing relationship with France.

The book traces the overt and covert French military actions in the region, the rise of the international community in the series of coups and counter-coups that characterized the 1990s and the new century.

The color figure illustrations are all oif 3 French soldiers.

The 6 aircraft profiles include: a Transal C-160F, two Sepecat Jaguar As, two Sepecat F-1Cs, and a Breguet BR 1150 Atlantic.
​Peter Baxter is an author, amateur historian and African Field, mountain and heritage travel guide. Born in Kenya, Peter has lived and travelled over much of southern and central Africa.

He was educated in Rhodesia (Zimbabwe), leaving the country after independence for an extended bout of travel before returning in 1989. Since then, he has guided in all the major mountain ranges south of the equator, helping develop the concept of sustainable travel and the touring of battlefield and heritage sites in East Africa.

Peter lives in the United States, working on marketing African heritage travel as well as a variety of book projects. His interests include British Imperial history in Africa and the East Africa campaign of the First World War in particular.

He is married with three children.
​THE BOOK:

The box art shows a black and white photo of a French sniper in tall grass. He wears a soft billed camouflaged hat and uniform.

Posed on top of him is a profile of a Sepecat Jaguar.

The book contains 85 black and white photos and 7 color ones and 8 maps.

There is a photo of a French newspaper headline and a propaganda poster, photos of 3 metal regimental insignias, pictures of notable individuals and troops, a photo of the book's author and a photo of 2 ships.

This book will be of interest to military historians and modelers alike. Highly recommended,.

I want to sincerely thank Casemate Publishing, the N.American distributor of Helion books and the folks at Helion.

All Helion titles can be viewed on Casemates site at:
www.Casematepublishers.com