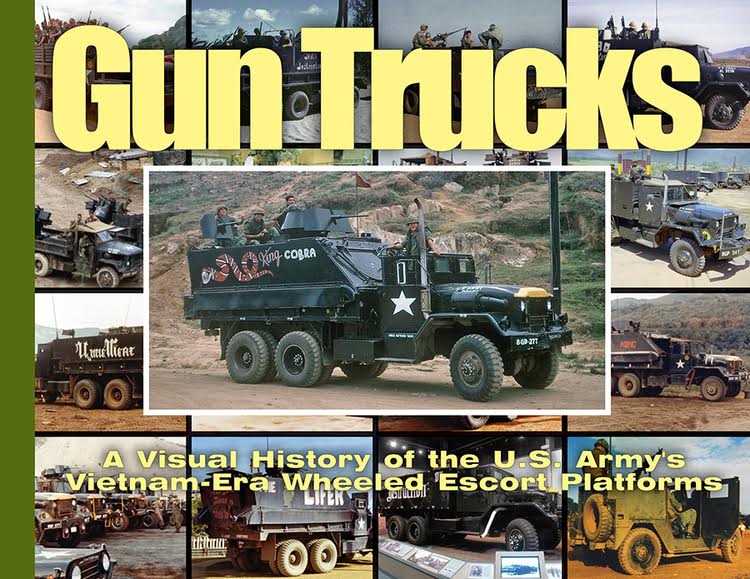 Born out of the need for convoy protection during the escalation of combat in 1967, the Vietnam-era gun trucks are some of the most interesting military vehicles fielded during the 20th century.
Noted military truck historian David Doyle has created an extensive and vivid portrait of these unique trucks. He begins with a detailed description of the truck platforms and designs, giving the reader a basic primer of the trucks prior to modification.

This is followed by a lengthy illustrated description of the many weapons systems used, from small arms to the .50-caliber quad. Coverage of the trucks in action follows and is composed of many never before seen photos, many of which are full page in size and in color.

From the lightly armored jeeps to the 5-ton behemoths mounting an entire APC in their beds, all the types are showcased. Gun trucks fielded by transportation, engineer and air defense artillery units are detailed.

The book completes its narrative with a comprehensive photo essay of the world’s only surviving gun truck now on display at the U.S. Army Transportation Museum.

Ampersand Publishing is based in Delray Beach, Florida and is a Hobby Link Japan company.

The book contains 89 color photos and 81 black and white ones. All are very sharp and clear.
Vehicles featured are:

The M54A2C is in the U.S. Army Transportation Museum of Ft. Eustis, Virginia. There are 68 color walk-around photos of it. It is displayed with a crew of 3 dummys in it and it has the nickname "Eve of Destruction" in white lettering on it's sides.

Many of the other vehicles shown in the photos have nicknames on them. Some of them are:

Lots of nicknames to choose from to put on models.

This book will be of great interest to modelers and AFV entusiasts alike. Highly recommended.

I want to thank the folks at Ampersand and Hobby Link Japan for this review sample.

All Ampersand books can be viewed on their web site at:

www.ampersandpubco.com
They invite dealers for their books.