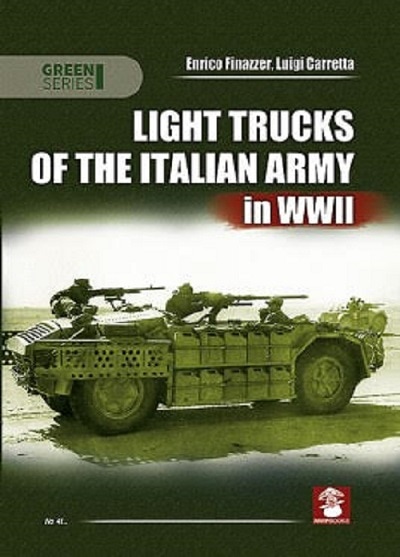 MSRP: $35.00
This book provides a detailed account of specialized light gun trucks produced by Italian industry in response to a specific request by the Regio Esercito (Italian Royal Army) between mid-1942 and mid-1943, know as the AS42 and the AS43, "AS" standing for "Autocarro Speciale" of "Atomezzo Speciale" (Special truck), or more currently, camionette (literally meaning "quick-quick").

These vehicles were meant to be used in desert warfare, issued to the unit called Raggruppamento Shariano (Saharan Group), to be used in action against the British Long Range Desert Group, or for special operations behind enemy lines, in force to the Italian special forces designated the X Reggimento Arditi.

In point of fact, they were too late and in too small a number to make a real impact in that theater, and after the fall of Africa into Allied hands they were diverted to several different units, as anti-paratroopers companies or anti-bridgehead mobile battalions either in Sicily or the Italian mainland.

After the Italian Armistice, furthermore, they served both with German troops and with the armed forces of the facist puppet state in the North of Italy called the Repubblica Sociale Italiana.

PART I: Development of the light trucks and technical description:

There are 100 black and white wartime photos in the book of the various trucks and the weapons they carried.

There is one battle map.

There is a black and white 5-view line drawing of a Camionetta AS42 and the AS43, to no particular scale but they look to be around 1/35th.

At the back of the book there are 15 color side views of the trucks and 2 color illustrations of Italian uniforms. These are all done by R. Calo.

This is a neat book. The camouflage patterns on these trucks are very intricate and will be of great interest to modelers. The book will also appeal to military historians.

I want to thank  Roger Wallsgrove, Editor-in-chief of Mushroom Model Publications (MMP) and Casemate Publishing for this review sample.

Casemate is the U.S. distributor of MMP books.

Listing of all MMP books can found on Casemate's web site at: