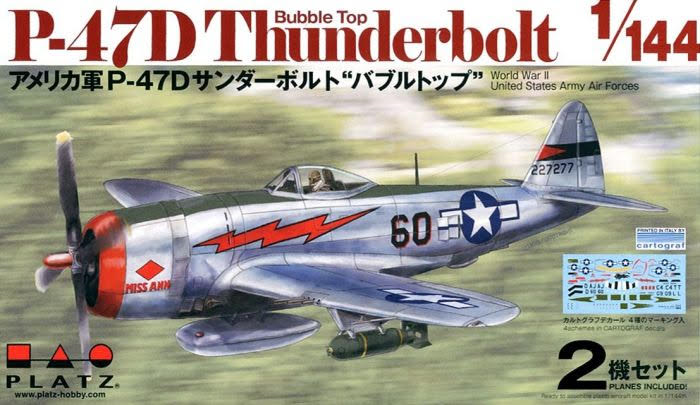 The Republic P-47 Thunderbolt was a World War II era fighter aircraft produced by the United States from 1941 through 1945.

Its primary armament was eight .50-caliber machine guns and in the fighter-bomber ground-attack role it could carry five-inch rockets or a bomb load of 2,500 pounds (1,103 kg).

When fully loaded the P-47 weighed up to eight tons (tonnes) making it one of the heaviest fighters of the war.

The P-47 was designed around the powerful Pratt & Whitney R-2800 Double Wasp engine which was also used by two U.S. Navy fighters, the Grumman F6F Hellcat and the Vought F4U Corsair.

The P-47 was one of the main United States Army Air Forces (USAAF) fighters of World War II, and served with Allied air forces including France, Britain, and Russia. Mexican and Brazilian squadrons fighting alongside the U.S. also flew the P-47.

The armored cockpit was relatively roomy and comfortable and the bubble canopy introduced on the P-47D offered good visibility. A present-day U.S. ground-attack aircraft, the Fairchild Republic A-10 Thunderbolt II, takes its name from the P-47.

Platz is a prolific model company, based in Shizuoka City, Japan. They make all manner of model subjects in the popular scales.

This kit comes in a un-wrapped end-opening type box. I am not fan of this type of box, because invariably parts or the decal sheet will find their way past one of the end flaps to become lost forever. Give me a tray and lid type hox any day of the week.

The box art shows a P-47D in flight. It is overall bare-metal, with a  red cowling nose, a red diamond over red "Miss Ann", a red lightning flash down the side of the fuselage outlined in black, a black fuselage number 60 before the national star insignia, a black horizontal stripe across the rudder with black serial no. 227277 below it.

This P-47D was with the 324th Fighter Squadron, 365th Fighter Group in 1945
One corner of the box has a color illustration of the decal sheet in the box. The decal sheet was printed in Italy by Cartograf brand. The kit contains 2 planes.
Another corner provides Platz's web address.
​One side panel of the box has 2 tiny side profiles of the P-47D.

One is overall bare metal, with a white and dark blue cowling nose, white stars are on the blue part. I has a olive drab anti-glare panel and spine and has black fuselage code AJ star and bars D, a black horizontal bar over black serial no. 429566 on the rudder. It has black and white D-Day invasion stripes under the fuselage star.

The other P-47D is also overall bare-metal, with a red cowling nose and a black bull that is charging under red "Balls out" outlined in black on side of nose, olive-drab anti-glare panel and spine, black fuselage code G9 star and bars L, black horizontal bar across rudder over black serial no. 433813.

It is with the 509th Fighter Squadron, 405th Fighter Group 1944.
​These are followed by a illustration of the 2 parts that make up the canopy, a one-paragraph history of the P-47D in Japanese and English and Platz's telephone and FAX numbers and their street address in Shizuoka City, Japan and their web address.

The other side panel says the kit is unassembled and unpainted plastic model in 1/144th Scale, 2 planes are included, 76mm in length (2 3/4") when completed, 4 schemes of decals for the 2 models in Cartograf brand decals, glue and paints are not included, some parts are extremely sharp, handle carefully, do not use near fire when using glue and/or paint, suitable for age above 15.

This is said in Japanese, English and French.

Copyright of the kit is 2018, Kit made by Platz in Japan.

The bottom of the box has 4 color side profiles of P-47D's. 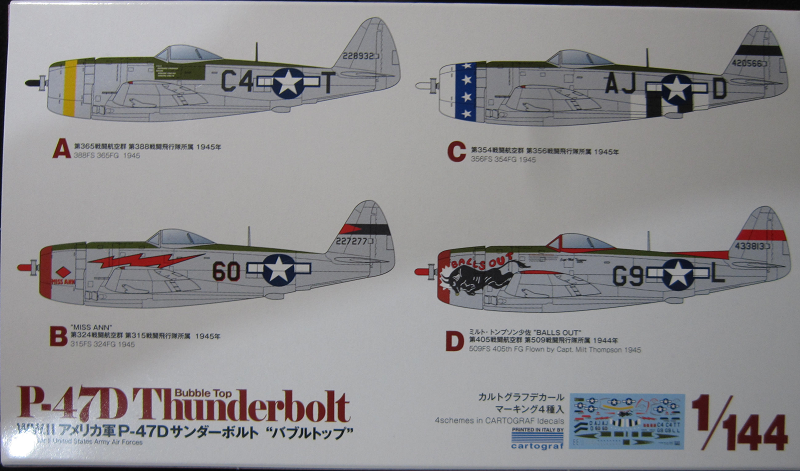 ​The letter A one is overall bare-metal with a yellow band around the cowling. It has a olive-drab anti-glare panel and spine, with a olive-drab area under the cockpit with the pilot and mechanic's name on it in white. The fuselage code is black C4 star and bars T, black serial no. 228932 on rudder side.
It was with the 388th Fighter Squadron, 365th Fighter Group 1945.

Illustrations B, C & D are of the other P-47D's already described above.

There is a color illustration of the Cartograf decal sheet printed by them in Italy.
​WHAT'S IN THE BOX:

The instructions consists of a single-sheet folded in the center to create 4 pages in 6 " x 8 1/4" page format, printed on slick-coated paper.

Page 1 begins with a one-paragraph history of the P-47D in Japanese and English, over this is an unassembled scale model kit, glue and paint are not included, some parts are extremely sharp, handle carefully, do not use near fire when using glue and/or paint. suitable for age 15 and above.

Bottom of the page has the first 4 assembly steps with colors of details called out.

Page 2 begins with decal application instructions in Japanese and English, over a repeat of Platz's FAX and phone numbers. Bottom of the page gives a balance of a grand total of 7 assembly steps.

Step 6 is pointing to the next pages as being the decal and painting guide.

Page 3 has three 4-views. All have been described above.

Page 4 has the fourth 4-view. It has been described too.

The bottom of page 4 has a suggested paint color listing of GSI Mr. Color and Model Master brands of hobby paints.

Part trees are alphabetized and have part number tabs next to the parts on them. However, they are not illustrated in the instructions.

There are 2 identical trees of all the trees.

Medium-grey letter A trees hold the fuselage halves and antenna, seat (4 parts each) 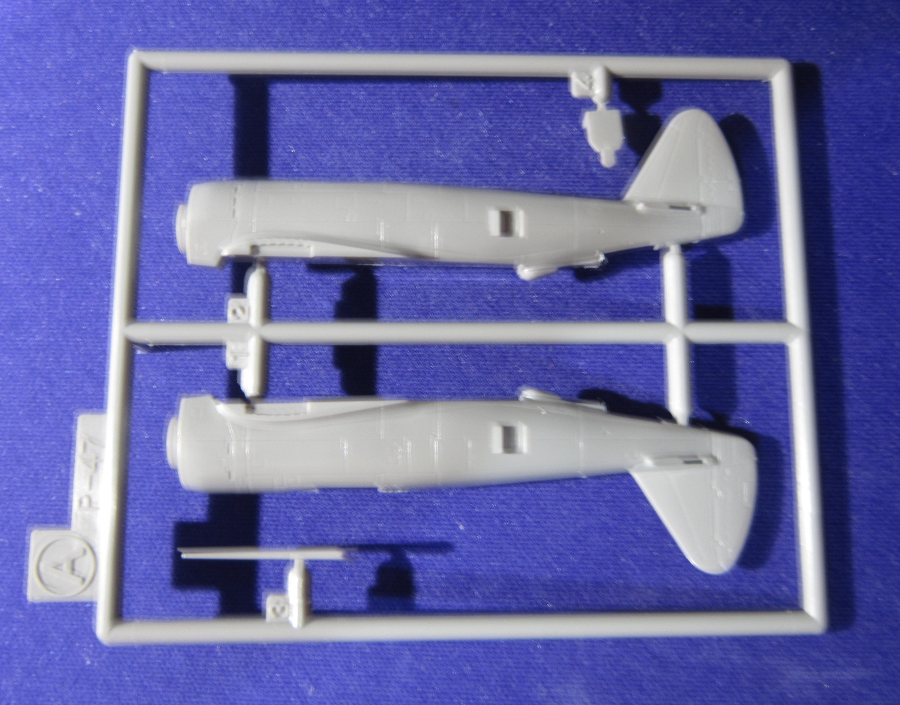 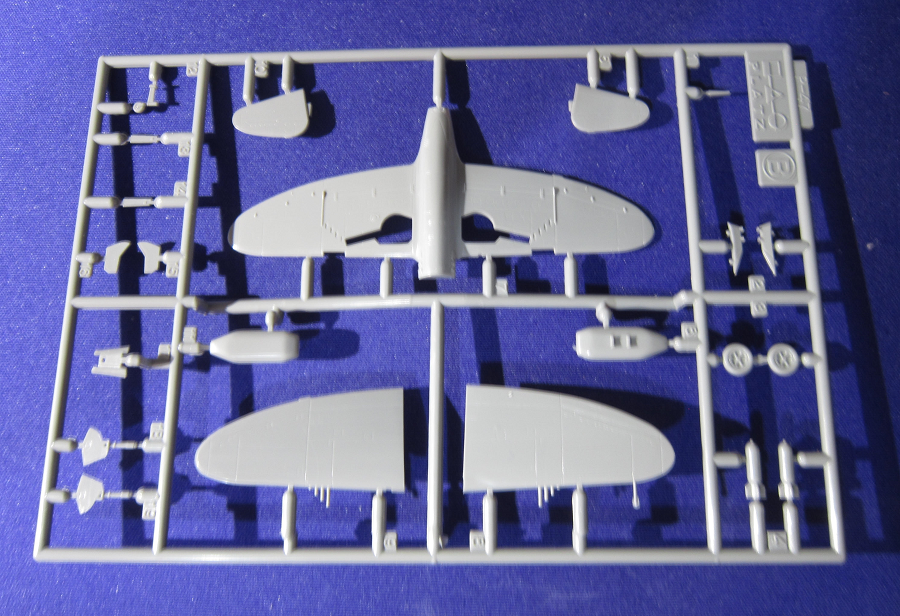 ​Medium-grey letter C trees hold: cowling, 3 propellers are in the kit with 2 cuffed and one uncuffed, air scoop, rocket-launcher tubes (9 parts each) 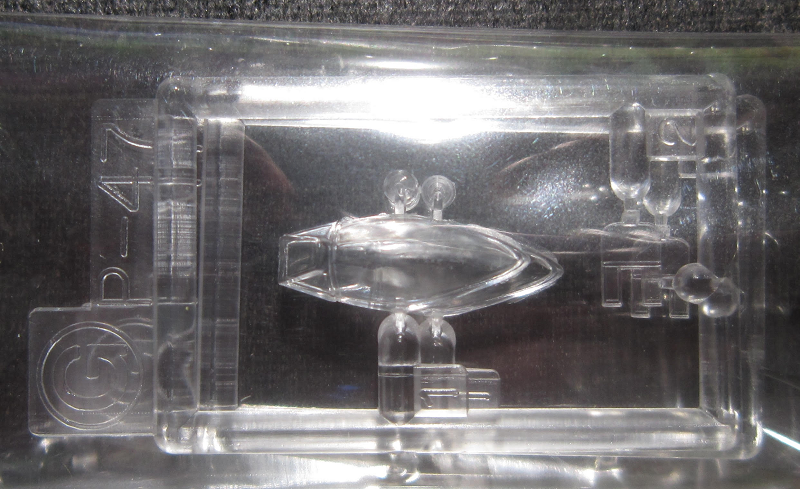 ​The decal sheet completes the kit's contents. It includes some stencil marking.

​The detail is of the engraved variety. No pilot figure is included.