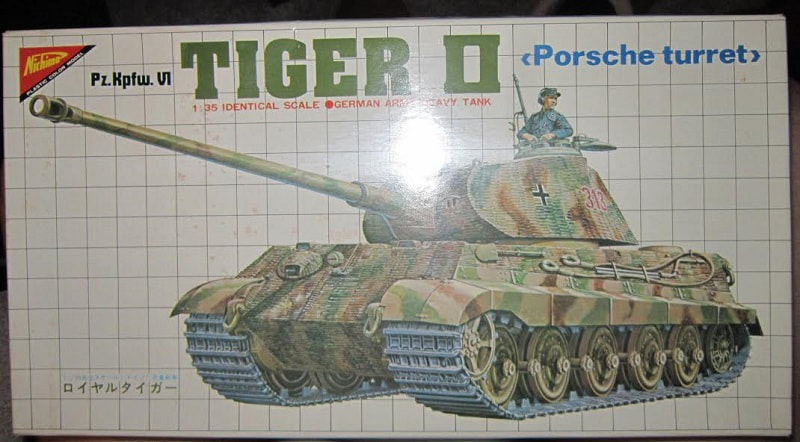 I paid $11.50 for my kit at Iowa Service Hobby in Des Moines years ago.
​HISTORY:

The Tiger II is a German heavy tank of the Second World War. The final official German designation was Panzerkampfwagen Tiger Ausf. B,[notes 1] often shortened to Tiger B. The ordnance inventory designation was Sd.Kfz. 182. It is also known under the informal name Königstiger(the German name for the Bengal tiger), often translated literally as Royal Tiger, or somewhat incorrectly as King Tiger by Allied soldiers, especially by American forces.

The Tiger II was the successor to the Tiger I, combining the latter's thick armour with the armour sloping used on the Panther medium tank. The tank weighed almost 70 tonnes, and was protected by 100 to 185 mm (3.9 to 7.3 in) of armour to the front. It was armed with the long barrelled 8.8 cm KwK 43 L/71 anti-tank cannon.[notes 2] The chassis was also the basis for the Jagdtiger turretless tank destroyer.

The Tiger II was issued to heavy tank battalions of the Army and the Waffen-SS. It was first used in combat with 503rd Heavy Panzer Battalion during the Allied Invasion of Normandy on 11 July 1944;on the Eastern Front, the first unit to be outfitted with Tiger IIs was the 501st Heavy Panzer Battalion, which by 1 September 1944 listed 25 Tiger IIs operational.

Nichimo is an old prolific model company based in Sano City, Japan. They make all manner of model subjects in the popular scales.

The box art shows a Tiger II posed against an all white background that has squares all over it.
The tank is in a wave pattern camouflage of earth-yellow, red-brown and dark-green and is covered in zimmerit.

It has a German cross and red 313 outlined in white on the surret sides. The commander is looking out of the upper turret hatch. He wears a black panzer uniform with a cloth peaked cap and has earphones on his head.

One side panel of the box has a one-paragraph history of the tank on it, followed by a small color repeat of the box art and Nichimo's address in Sano City, Japan. Kit was made in Japan.

​
The other side panel has 6 color box arts of other AFV kits that Nichimo manufactures:

The kit holds 5 light-tan trees in 3 clear sealed cello bags, a loose light-tan hull tub and roof, black vinyl tracks and motorization hardware in a clear cello bag, decal sheeet and 2 instruction sheets. There is also a tube of cement included that had ruptured and is now glued to the tray.
One instruction sheet is in Japanese, the other in English.

The English sheet is a single sheet that accordion folds out into 8 pages in 6" x 9" page format.
Page 1 begins with a black and white photo of the model made up in the box art scheme, but with turret no. 223, over a list of the names of the kit parts and Nichimo's street address in Sano City, Japan.

Page 2 through 6 give a grand total of 19 assembly steps.

The Japanese instructions consist of a single sheet that accordion folds out into 6 pages in 8" x 10" page format.

Page 1 has the 1st assembly step on it.

Page 2 to the top of page 6 have a balance of a total of 18 assembly steps. The bottom of page 6 has a list of the names of the kit parts. 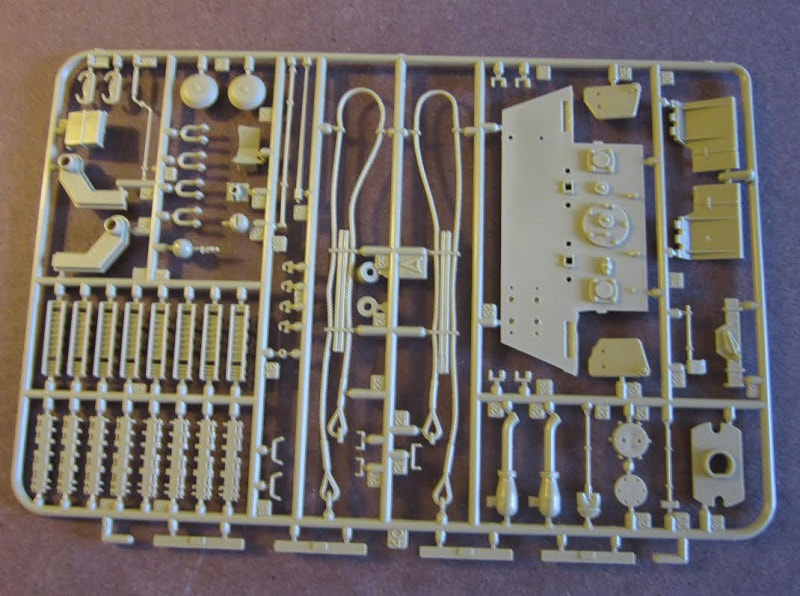 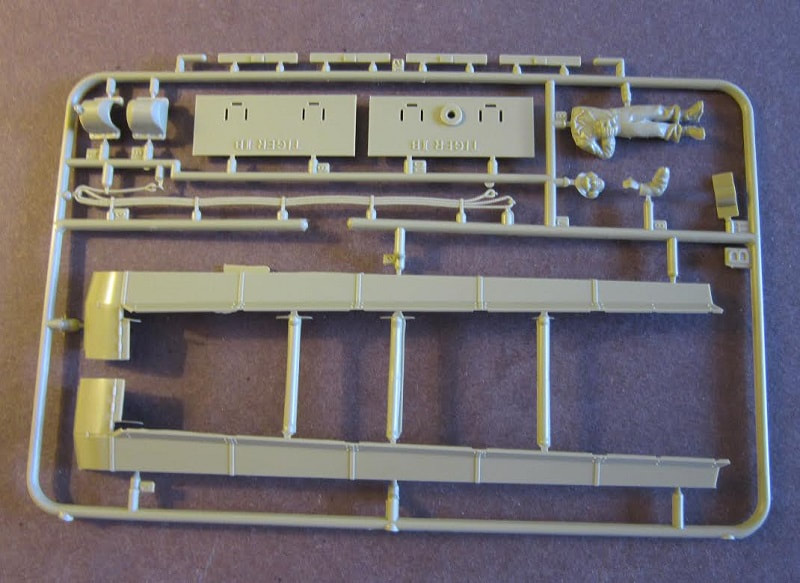 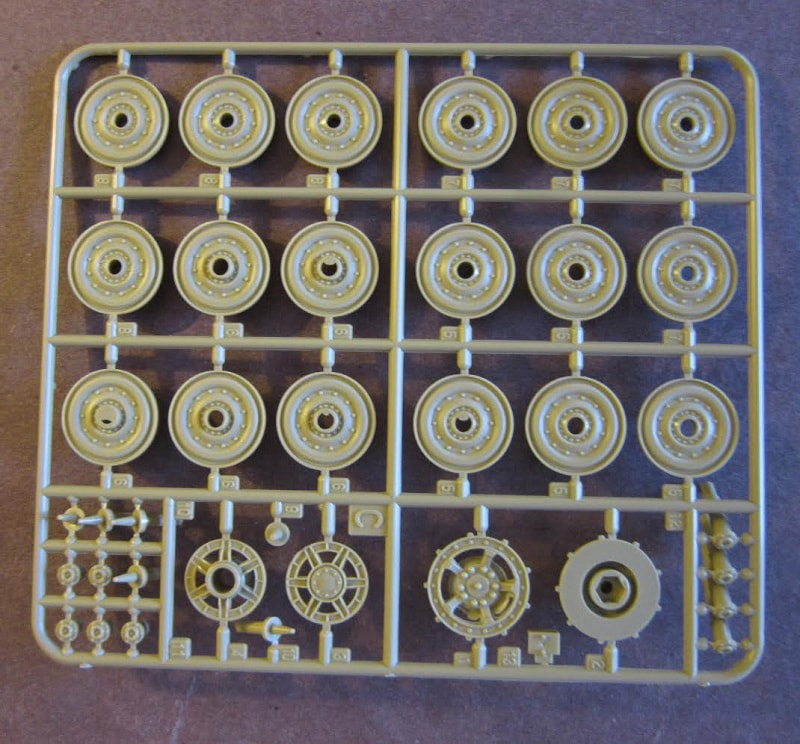 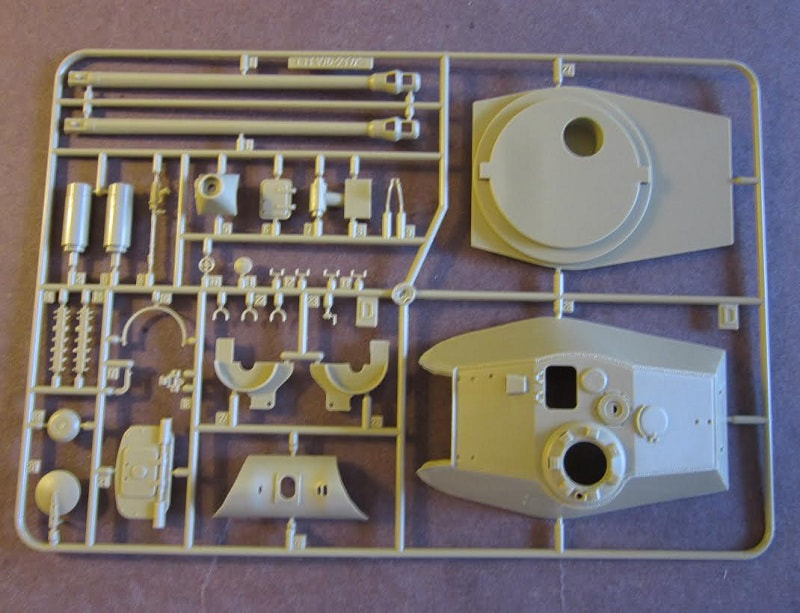 ​Next is the loose light-tan hull tub and roof parts.

The hull tub has several motorization holes to putty up to make a static model. There are also raised letters on the bottom of the hull tub to sand off. 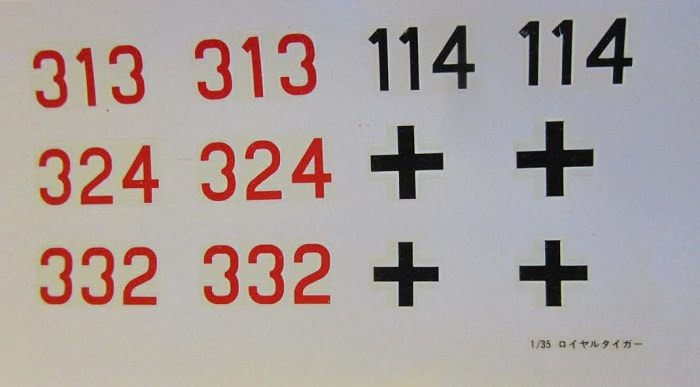 ​I am going to add some of my company's (Armor Research Co.) brass PE engine air intake screens to this model. 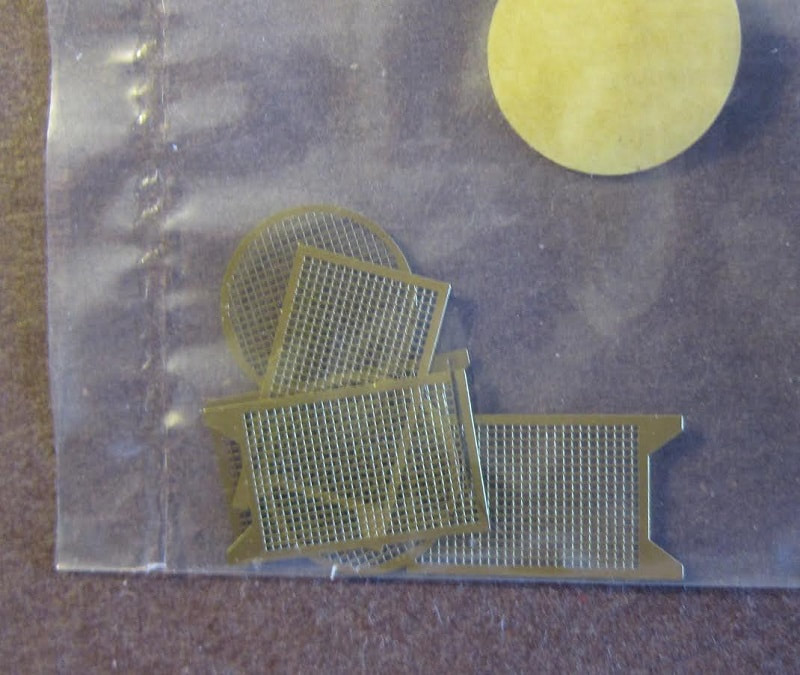