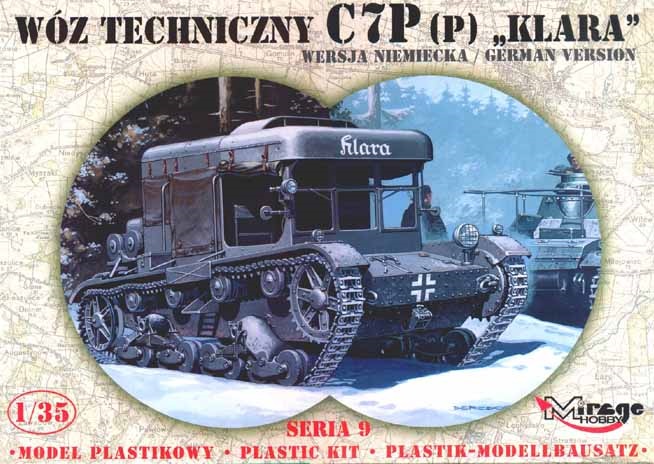 Mirage is a model company located in Warsaw Poland.

The C7P tractor was manufactured in Poland by the Panstwowe Zaklady Inzynieryjne (State Engineering Works) from 1935. Its design used components of the Vickers 6T tank - built under license in Poland - in a modified form as the 7TP. The tractor was designed by Witold Jakusz, who used the engine, body, suspension, and transmission. The first tractors were introduced into service with the 1st Heavy Artillery Regiment at Gora Kalwaria, which converted in 1935 to the 220 mm mortars purchased from Czechoslovakia. Eventually, five C7P tractors were required for each mortar: one for the barrel carrier, one for the carriage, one for the undercarriage, and two for equipment and ammunition trailers. According to the establishment, each two-gun battery should have 11 tractors. Outside of the 1st HARgt the C7P tractors were planned to be used as recovery vehicles in light tank companies: two vehicles per company, and mobile armor units would include 14 vehicles each. C7P tractors were also used in railway engineer units, each railway bridge company scheduled to have one to three machines, either on platforms or on rail wheels.

According to incomplete information, the following number of tractors were in service prior to entry into WWII: seven at the Armored Weapons Training Center at Modlin, five in the 2nd Armored Battalion at Zurawica, four in the 3rd AB in Warsaw, two in the 4th AB at Brzesc nad Bugiem, and three in the 5th AB in Krakow. Immediately prior to the outbreak of war, four surplus vehicles of the type from the Main Depot of Armored Weapon Materials were allocated to the 12rh AB at Luck, and for the 21st Light Tank Battalion, which was equipped with the French R-35 tanks and just being formed. After the war broke out, single tractors were still at this depot and no.1 Armored Weapons Replacement Center. A number of C7P's were allocated to 30 mobilized railway bridge companies, and at least one tractor on rail wheels was used at No. 1 Railway Bridge Engineer Replacement Center.

This kit is one of three different boxings of the C7P Polish tractor. One kit is of the Polish version, the second one is of a Russian one with external fuel tanks and the third one is this one in Captured German markings as a recovery vehicle that includes a towing hoist on the rear..

The kit comes in a large tray and lid box. Actually, this box could have been smaller, as…when you open it you see a letter L 3” wide void around the parts. The box art is a little unique. It is a painting of a C7P(p) in captured German markings, parked in a clearing in a woods, on snow and with the rear of a German Befelswagen tank behind it. It bears the nickname “Klara” on the front of the cab roof (this marking included on the decal sheet). This painting is done in 2 overlapping circles and the rest of the lid and side panels have a map of Poland printed on them.

I think that Mirage should have pictured the crane on the back of the C7P in the box art. It would tell the purchaser that it is in the kit, instead of it being a surprise after you buy it.

The box says that the kit is for modelers of age 6 to adult. I would say that is too young, as the kit is very complex.

Inside the box are 5 trees of battleship gray colored parts trees, a tree of clear parts, rubber-band type treads, and a decal sheet. All are cello bagged into three cello bags. The instructions complete the contents.

The instructions consist of a stapled booklet of 8 ½” x 11” format that is 16 pages long.

Page one has a small black and white repeat of the box art, followed by the history of the C7P in Polish, Czech and English.

Pages two through 15 gives us 35 assembly steps, called out in Roman numerals.

As this tractor is a conversion of the 7TP turreted light tank, some of the basic tank parts have to be cut down a bit. This is called out in step no. VII, where you trim down the hull sides, and in step VIII…where you have to whittle on the drive sprocket units. I am still puzzled as to just what Mirage is telling you to chop up in this assembly step???

This kit has a very complete interior. Only the engine is missing. However, the transmission compartment is detailed inside and the hatches to this area can be posed open or shut. A very nice towing crane is included, to make it into a bergewagen.

The bottom of page 15 has international assembly symbol explanations and a paint number chart.

1. A side and top view of a captured C7P(p), no. 8731 from the 1st Heaviest Artillery Regiment, in the Polish three-tone camouflage of sand yellow, dark brown and olive. This is a wave pattern.

2. A side and top view of a captured C7P(p) “Klara” in overall Panzergrau scheme. (the box art subject) This tractor was used by the Germans, among others, to recover damaged Polish tanks from 1939 battlefields.

In assembly step XXIII you can opt for either  round or square rearmost side windows on the cab.

The first 2 trees of parts are common to Mirage’s kit of the straight 7TP turreted tank kit. One tree contains the hull bottom, sides, leaf springs and bogies, turret mantle (not used) and exhaust pipes (16 parts). I have assembled the hull parts and have cut the sides down where indicated on the assembly drawings. 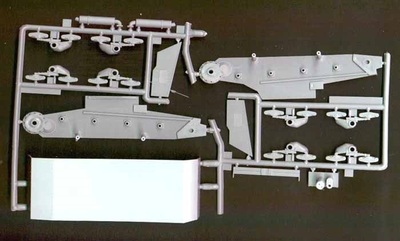 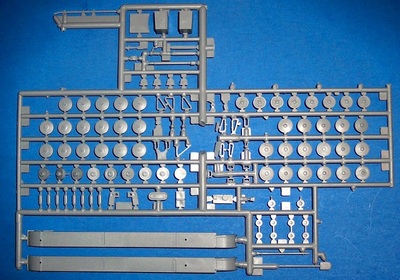 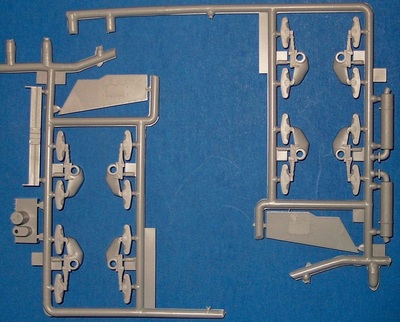 The third tree holds the cabin and interior parts (95 parts) 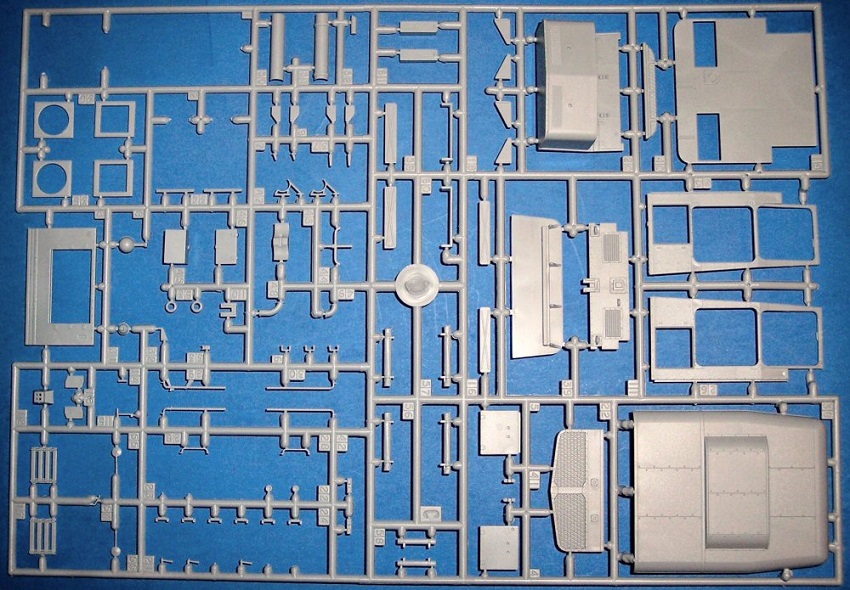 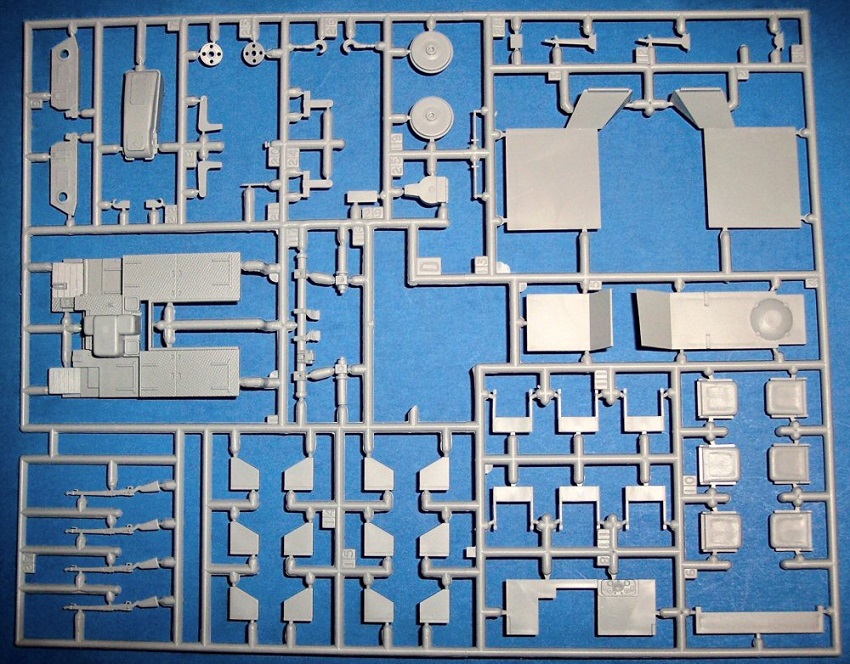 The fifth (smallest tree) holds four more rifles and the crane parts (16 parts) One of the rifles in my kit was busted in two…sigh. I am also not sure whether the rifles depict Polish or German ones as molded?? 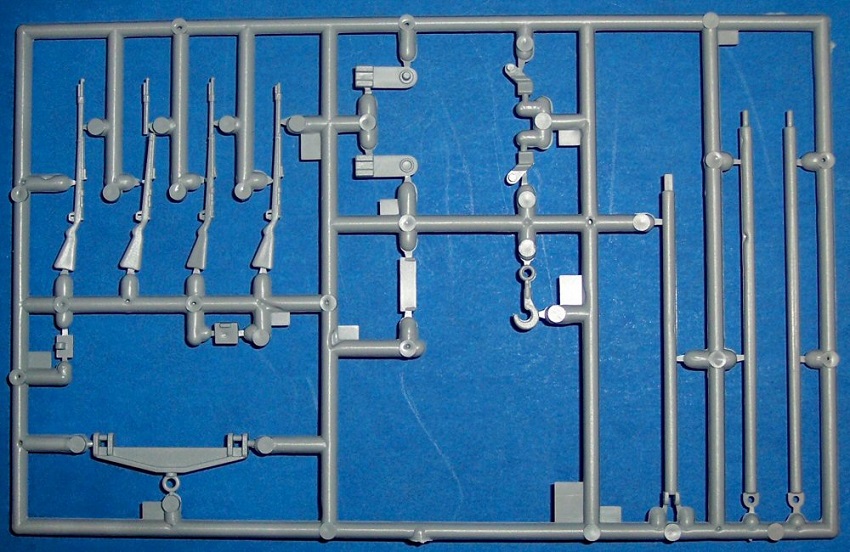 Next comes the clear parts tree. This holds all the cabin windows and the head light lenses. 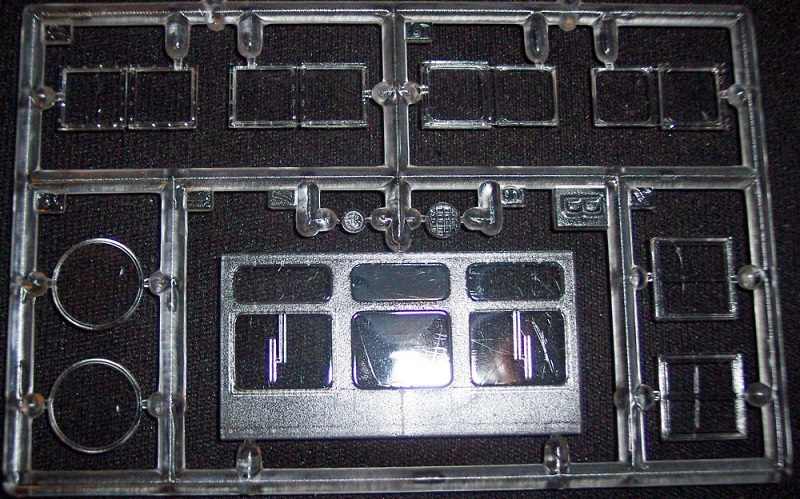 The dark gray vinyl rubber-band type treads come in two lengths, with a tow cable on the same sprue (3 parts) These are the type that have to be heat welded into a continuous loop and are not glueable. .

I would advise modelers to get some after-market individual links for this kit. The vinyl ones are rather sad and poorly detailed. The links are not delineated at all. RPM brand makes a kit of links for the C7P. It is kit no. 35-10001. These links are designed to work on the 7TP tank, the T-26 tank or the Vickers tank. 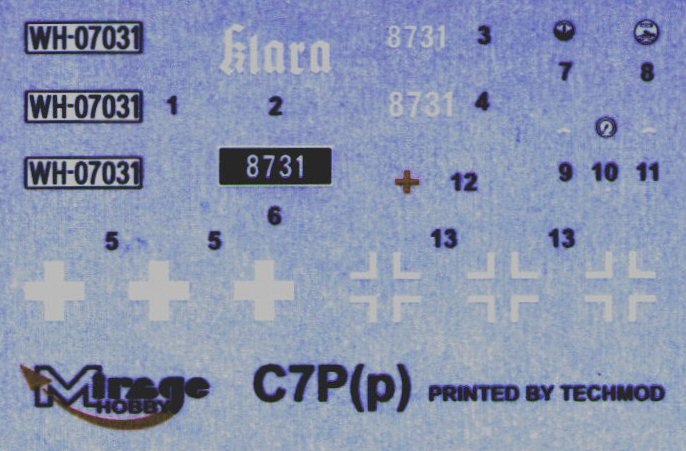 This is a very detailed kit and should make up into a real show stopper out of the box. However, there are 3 different PE sets offered by PART brand. I have these sets. They are absolutely loaded with parts and in some cases a little over-engineered, because the parts are so microscopicl as to be a nightmare to try and handle and glue to things. Most of them are not much bigger than a period in this sentence. Still, a lot of the parts are larger and useful. There are two exterior sets, an interior set and one of fenders and a final one of side curtains for the windows of the cab. I don’t have the last 2 sets. Five PE frets for one model kit is very excesive!

The instructions are sometimes puzzling and have to be carefully studied and things dry-fitted before cementing. For this reason, I would only recommend this kit to modelers with experience with other kits of this complexity and parts count.. It is not a kit for the novice at all and definitely not a weekend project.

It is a super-neat subject and a welcome break from Tigers and Panthers. With the crane on the back, all kinds of diorama ideas come to mind.

I got my kit years ago in trade with a modeler in Krakow Poland.