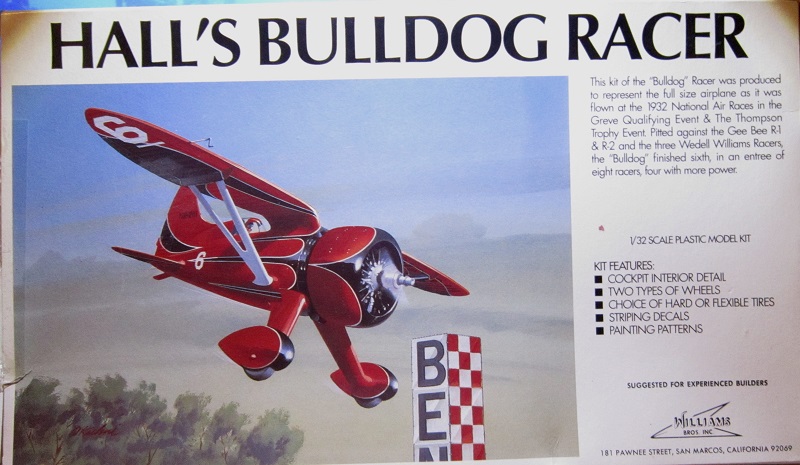 This aircraft, a product of the designer of the Granville Brothers Gee Bee Z Sportster Racer, Robert Hall. He was an engineering test pilot in the early 1930’s, he engineered and test flew the Gee Bee Sportster. After disagreement with the Granvilles about designing speed aircraft, Hall left the group and designed his own airplanes.

The first was a shoulder winged airplane, two placed. It was to fly in the London to Melbourne Race. The airplane was named “The Chicada” and was painted to look like the insect. The second design was a small single place, gull winged airplane, built to fly in the 1932 Cleveland National Air Races and the Thompson Race. The gull wing feature of the “Bulldog” became a problem in directional control stability, and several modifications of the fin and rudder were tried. The fin and rudder area, above the wing level, was increased to escape turbulent air from the gull section. Reversal of the lateral control was experienced with the ailerons, before downward deflection was eliminated.

In qualifying for the Thompson Trophy Race, the Bulldog turned a speed of 243.717 mph. In the race, the speed was disappointing, only 215.57 top speed – briefly 270. The airplane was dismantled after the races were over and the engine was returned to Pratt & Whitney.

Until recently, the outline shape of the wings generally followed the plan form published in the 1933 Model Airplane News magazine. They were incorrect !! Recent drawings had made corrections to the outline of the wing. However, an old photograph, showing the Bulldog turning a pylon, showed the wings were – in fact – swept-back by 5 degrees. These latest drawings, from Vern Clements, have given Williams Bros. the most accurate model Bulldog they could produce.

Williams Brothers had a changing of the guard, in December of 2004. After 45 years in business, and founded by the late, original brothers Larry and Gainger, the immediate family could not continue the business. So, in March of 2005, all rights and assets required to produce the original products were purchased and moved from Los Osos, CA to Taylor, TX by Brett Industries, Inc.

To sustain the legacy of the original founders, the parent corporation will continue to operate under the brand name of “Williams Brothers Model Products”. The return of the products back to production began in August of 2005, with shipments starting in late August.

With nearly 200 products needed, production will focus priorities in the order of wheels, guns, pilots, engines, aircraft kits, HO kits and accessories until inventory can sustain operations at reasonable levels.

When I purchased my kit, back in the 80’s, Williams Bros. was based in San Marcos, CA.

The kit comes in an end-opening type box held shut with tape.

The box art shows the Bulldog passing a checkered pylon, with the letters BEN visible on it. I assume the rest of it says BENDIX and this illustration is during that race. The Bulldog is in red with black scalloping outlined in white. It carries the racing number white 6 on the sides of the fuselage and under the left wing tip. The black registration number NR-2111 is in small letters on the tail and above the right wing and below the left wing in larger letters. The wing struts are bare metal and the propeller is too.

Next to the illustration is a one paragraph history of the Bulldog and a list of the kit’s features: cockpit interior detail, all plastic wheels or alternate plastic wheel hubs with vinyl tires, striping decals and paint patterns for the stripes. Below this is the statement that the kit is suggested for experienced modelers and Williams Bros. address at the time they were still in California.

Side panels of the box give color box arts of other aircraft kits in the Williams Bros. Line.

In 1/72nd scale: the Boeing 247 airliner, the Northrop Gamma and the Douglas World Cruiser (shown with wheeled gear).

In 1/48th scale: the Ford Flivver aircraft, the Corben Super Ace and the Pitcairn autogiro.

The back of the box repeats all of these aircraft again as black and white photos of the models made up. Added to the 1/72nd ones is the Curtiss C-46 Commando and the World Cruiser is shown with floats. Four different Pilot figures, offered in various scales and factory painted are shown, four machine guns, three aircraft engines and loose cylinders and wheels are also available in various scales. We are not told WHAT those scales are.  You could get a price list from Williams Bros. by sending them a self-addressed stamped envelope. Their address appears here too. The bottom of the back of the box has an advertisement for the Ford Flivver aircraft, calling out the kit’s features and a one paragraph history of it. So the box is a virtual catalog for Williams Bros. stuff. However, kit numbers are not given.

The instructions consist of a single sheet in 14” x 8 ½” format, printed on both sides.

The face side has the history of the Bulldog, followed by “important-read before you start” instructions, painting and construction instructions.

The reverse side has a 4-view line drawing showing placement of the markings. This is next to specifications about the real Bulldog.

Below this is an exploded drawing of the engine and cowling assembly, next to an actual photo of the Bulldog with Bob Hall in the cockpit with the canopy removed. Below that, is a photo of the cockpit interior assembled and another photo showing the inside of one of the fuselage halves with the cockpit in place and the other fuselage half with the landing gear and horizontal tail surfaces in place.

There is a second, single sheet in the kit that is 8 ½” x 11” format (stationary size). It has templates on one side of it for doing the stripes on the Bulldog. A small slip is in the kit that says that no. 1 employee at Williams Bros. factory molded the kit and that employee no. 5 packed it. This slip has to accompany any requests to the company for service needed with the kit. 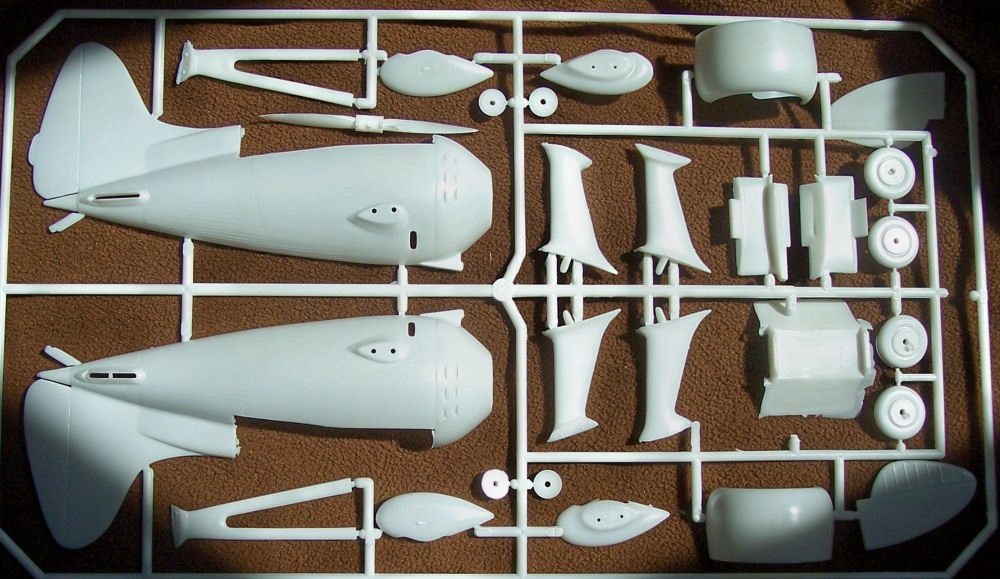 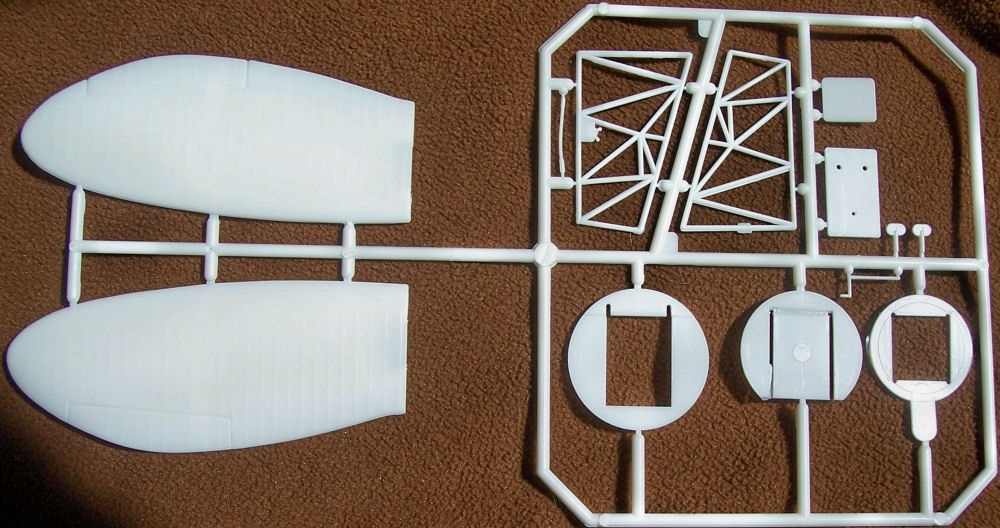 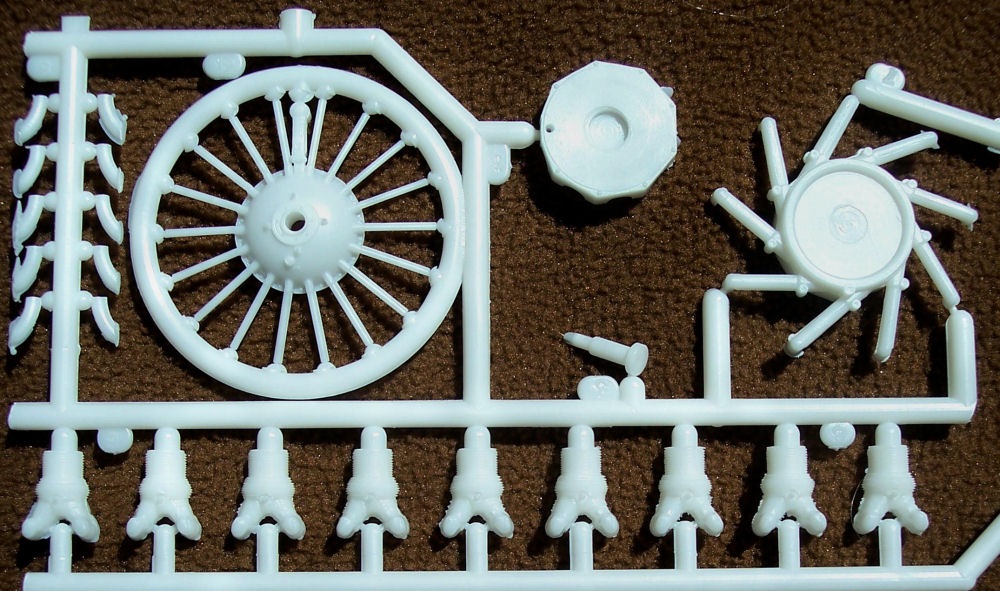 The single clear cockpit canopy part and the 2 black vinyl tires complete the parts in the kit. 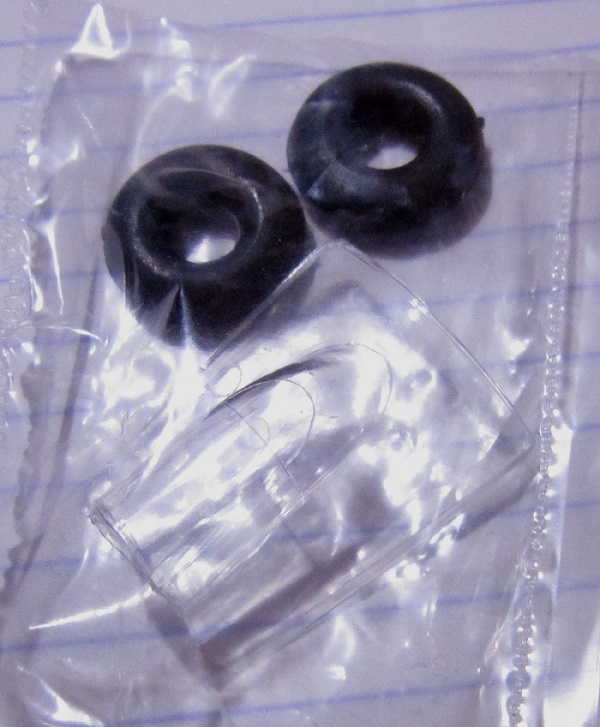 The decal (already described above) completes the kit’s contents. This decal is done by Scale-Master in their Invisa-clear line of decals. The sheet also includes a decal for the instrument panel dials. 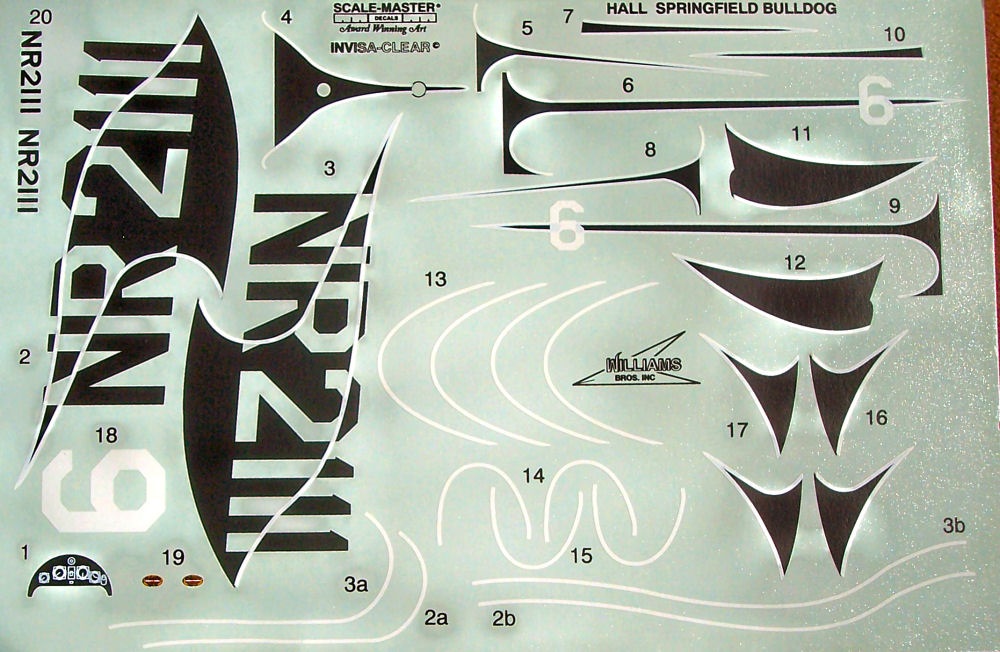 This is one neat 1930’s racing aircraft. I recommend it to modelers that have a few other aircraft kits under their belts, because Williams Bros. kits always take a little extra TWEEKING to get them assembled it seems.