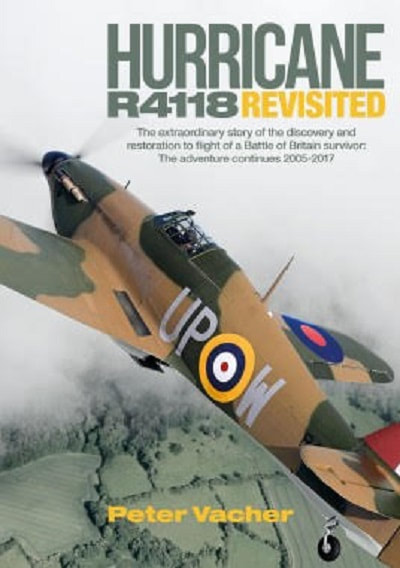 MSRP: $ 39.95
Twelve yars since the amazing account of Peter Vacher's discovery of this Hurricane in India was originally published, Grub Street is thrilled to bring readers the updated story of Hurricane R4118.

Since the restoration of this magnificent aircraft to flight status in 2004, Peter Vacher continued to research its history. In Hurricane R4118 Revisited, more stories of R4118's origins are told, including the extraordinary tale of how this aircraft shot down a friendly Whitley bomber before it was assigned to a RAF squadron.

Focus is also given to the role of 605 Squadron's ground crew and the aircraft during the Battle of Britain. Continuing into the present day, Vacher highlights the challenges of maintaining and flying a historic warbird, whilst Keith Dennison, a warbird pilot, provides expert commentary on exactly what it is like to fly a Hurricane.

the book concludes with the sale of R4118 to an enthusiastic Englishman and the decision taken to keep the aircraft at the Shuttleworth collection. With brand new photography and sources, including wartime letters from Bunny Currant, this book is essential reading for all Hurricane enthusiasts and modelers.

The author, Peter Vacher was born in London during the Blitz. Educated at Marlbourough College, he began from an early age restoring vintage cars as a hobby, building up a small collection. He also traveled extensively in India, meeting the Maharajas whose families had imported Rolls-Royce and Bentley motor cars in the 1910's and 1920's.

When his job changed and he moved to Australia, Peter and his wife, Polly, learnt to pilot light aircraft. They subsequently flew around the Australian continent before returning to the UK and acquiring a four-seater Piper Dakota.

Polly flew the Dakota solo around the world in 2001 and again in 2003. Meanwhile, Peter's interest moved from motor cars to restoring vintage aircraft. He is also the author of The History of the Jodhpur Flying Club, which includes rich detail of the RAF's training activities in India during WWII. Peter and Polly have 3 sons and the whole family is aero-minded.

Grub Street Publishing is based in the UK.

The cover art shows Hurrican R4118 flying above the countryside on both the front and back covers. It is in a light sand base with dark brown wave pattern above a light grey undercarraige. It carries the sky colored letter code UP roundel W on its fuselage sides.

There are 2 small black and white photos on the back cover. One shows a hurricane flying along with a white fuselage band with the number 7172 over it and a white fuselage number MF roundel X34 on its sides. The other photo is is of a group of RAF pilots.

There are 23 wartime black and white photos in the book and 125 color modern photos. The color ones are mostly walk-around type shots of the aircraft being restored. Forty-eight of the color photos are of people working on the restoration.

There is reprint of a newspaper article about the restoration, 3 wartime drawings and 4 wartime cartoons. Included also are copies of documents and lists.

This is the extraordinary story of the discovery and restoration to flight of a Battle of Britain survivor found in India. The adventure continues 2005-2017.

I want to thank Casemate publishers, the North American distributor of Grub Street Publishing books, who sent me this book sample,  and the folks at Grub Street.

A complete listing of Grub Street books can be seen on: