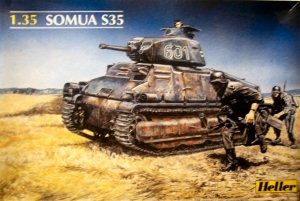 Considered as the best French tank in 1939, the Somua S-35 was in many ways superior to all foreign tanks in the same category, including German tanks. The 47mm S.A. M35 gun on the tank was itself the best anti-tank gun in existence at the time. Operated by a team of 3: the tank commander, pilot and gunner, the Somua S-35 could cross a ford of 1 meter deep and could climb slopes of almost 70%.

Four hundred Somua S-35’s were built and in 1940 were used by the 1st, 2nd and 3rd Divisions Legeres Mecanique (D.L.M.), and the 4th Division Cuirassee de Reserve, commanded by Colonel DeGaulle, within the 4th D.L.M.

The S-35’s took the full brunt of the Spring Offensive in 1940 and were almost all destroyed or captured by German forces. In fact, the 1st D.L.M. became part of the German 7th Army, and was deployed in North Belgium and the Netherlands. As for the 1st Army, which included the 2nd and 3rd D.L.M., it was deployed in central Belgium.

Finally, the 4th Division Cuirassee de Reserve of General DeGaulle confronted from 16th to 20th May, 1940, the 1st Panzer Division of General Guderian at Montcomet, in Picardy.

After some modifications in 1943, the Germans used the captured tanks on the Eastern Front. In German service they were called Pz.Kpfw.35.9.739(F). They were also used for training and hunting down partisans.

Heller was a prolific model company based in France. I am not sure, but I think they went out of business

The kit came in a shrink-wrapped  tray and lid type box, with very sturdily built tray. The box art shows a Somua in German markings, crossing a grassy field and accompanied by 2 German foot soldiers.

One side panel says the kit has a scheme for a S35 captured by the Germans and designated as Pz.Kpfw.35-9.739 (f), no. 601 in 1943. Next to this is a listing of Heller paint numbers to use on that scheme. The other scheme mentioned in the kit is for a Char de Cavalerie, 93, no. 67252, 4eme Section, 1er Bataillon,  18eme Dragons, 1ere Brigade Legere Mecanique, 1eme Divisin Legere Mecanique, Belgique 1940. Next to this is a list of Heller paint numbers of colors to use to finish this version.

Bellow these is the dimensions of the model when completed: 75 mm high, 154 mm long and 64 mm wide. The kit contains 216 parts. The kit was made in France. Paint and cement are not included is said in 15 languages (including English). The kit is not for children under 3 and Hellers address in France is provided.

The other side panel has a small color repeat of the box art, followed by a one paragraph  history of the Samua S35 in 4 languages (including English).

Inside the box are 5 tan parts trees, 1 clear parts tree, the decal sheet (all these in a single cello bag), steel colored vynil rubber-band type treads, the instructions, customer service coupons (to mail in to Heller for any missing parts) and a large sheet showing the box arts of no less than 271 other kits that Heller markets. These are in full color and are the size of postage stamps. Also, on this sheet is a coupon to order Heller’s 50 page catalog.

Page 1 has the history of the Somua in eight languages, including English.

Pages 2 through 9 give a total of 21 assembly steps.

Pages 10 and 11 have two 5-view drawings of the painting and marking options provided in the kit:

Page 12 of the instructions begins with general instructions in 12 languages, including English, followed by international assembly symbol translations.

Strangely, the parts trees are called out numerically instead of alphabetically, like we usually see in kits. There are NO parts trees illustrations in the instructions, so each step will have to be studied to get the right part numbers for assembly. Bad move Heller. 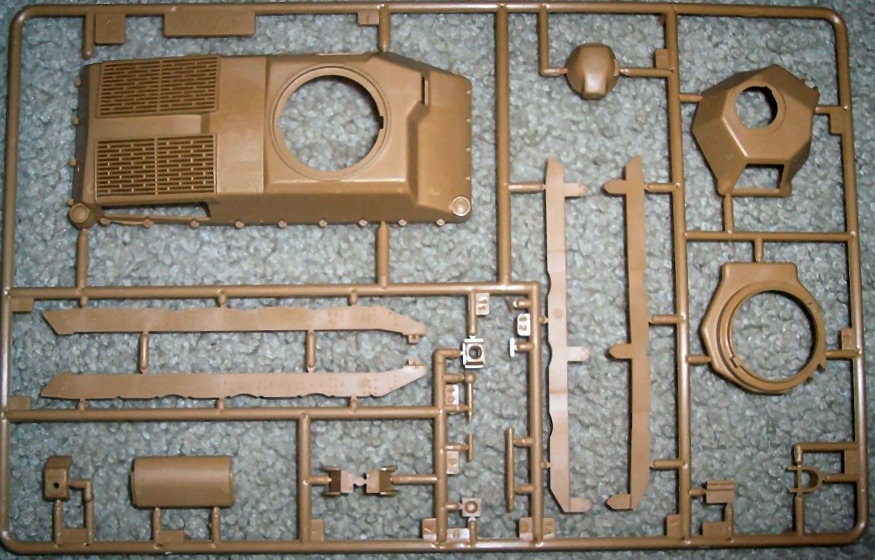 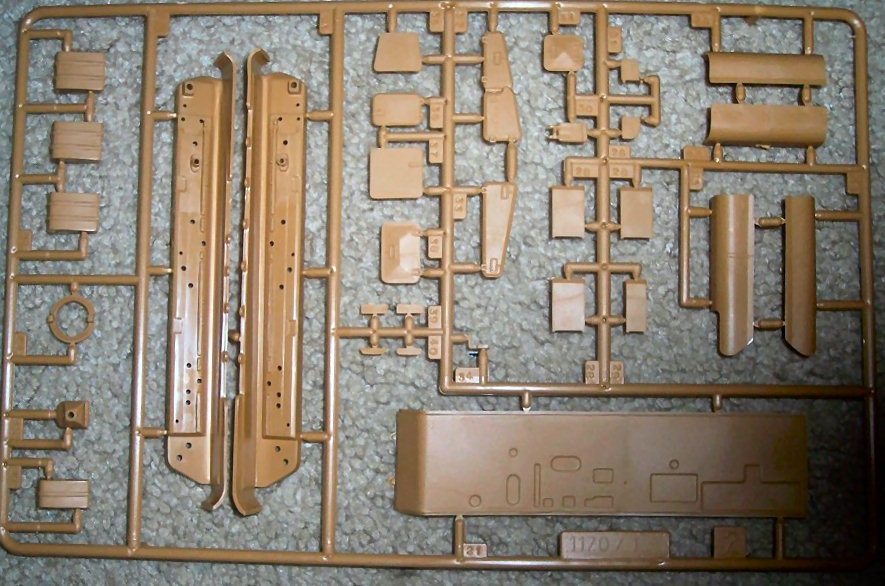 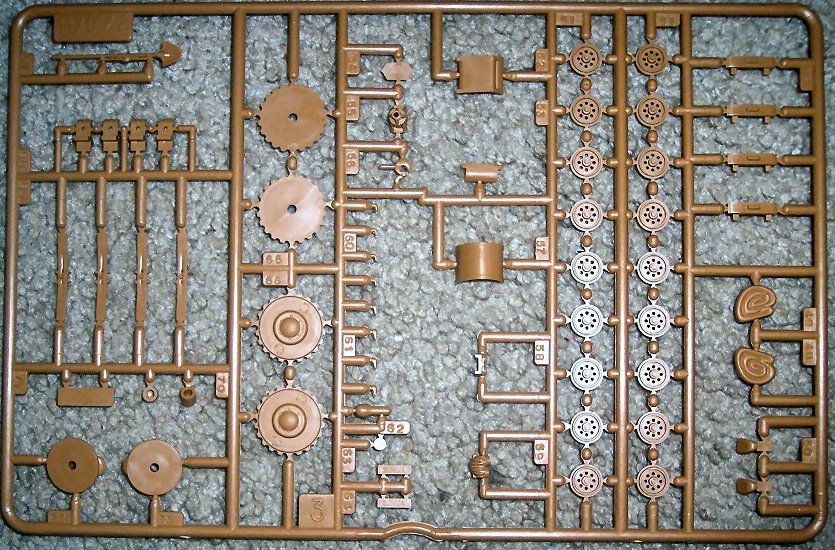 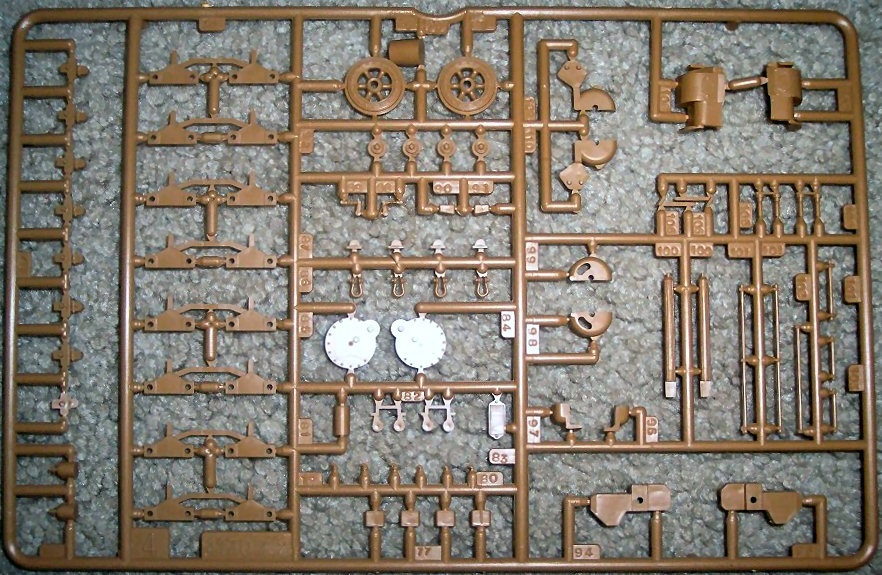 Tree number six is the clear parts. There are 3 lenses on this tree.
Tree number seven holds two seated crew figures. One figure is to sit inside the tank on a raised peg. However, there is no further detail in there. The second figure is to be posed sitting on the door at the rear of the turret. Each figure is divided into front and rear torso halves, separate legs and arms, heads, two pistols in holsters, two steel French tanker helmets and one cloth bag. (19 parts). 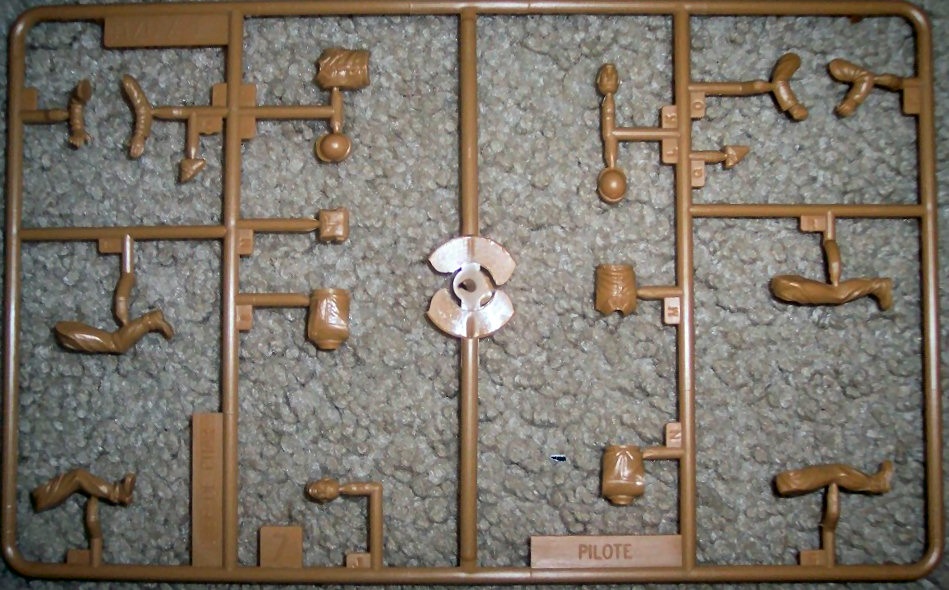 The kit decals include markings for one French and one German tank.

This is one salty-looking French tank. I wish more marking options and interior detail had been in the kit, but what is there is nice. The engine air intakes are nicely molded open on the rear deck and overall detail is very good.