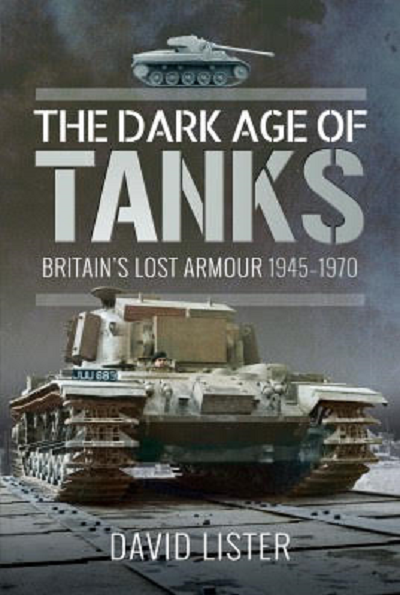 The Dark Age of Tanks

In the thirty years after WWII, the British army entered a period of intense technological development. Due to the lack of surviving documentation, this period is almost a second Dark Age.

What survives shows the British Army’s struggle to use cutting edge technology to create weapons that could crush the Soviet Union’s armed forces, all the while fighting against the demands of Her Majesty’s Treasury.

On this journey, the Army entertained ideas such as micro-tanks of about 20 tons in weight with two-man crews, massive 183 mm anti-tank guns, devastating rocket artillery, colossal anti-tank guided missiles and ended up on the cusp of building hover tanks.

This book takes a look at the records from a time period of increasing importance to the tank historian and starts the process of illuminating the dark age of British tanks.

This book is hard-bound with a black cover with a paper fold-over jacket on it. The jacket shows a black and white photo that has been partially colorized. It shows a FV200 tank (possibly the 3rd prototype built). It has a black rectangular plate on its left rear fender with white serial no. JUU 683 on it.

There are 51 black and white photos (counting the ones on the front and back cover too).

There are 16 illustrations in the book.

A Churchill AVRE, 2 photos of a Centurion, a U.S. Sherman tank towing a Crocodile trailer, a Crocodile flamethrower, a Centurion Crocodile, an original Conqueror turret design, a basic Conqueror and 2 shots of the Mk.II version of it, a failed Chieftain gun mantle, 3 photos of Project Contentious tanks, 2 photos of a Comet test rig to test laying of elevation and limited traverse.

The book ends with pages of sources and an index list and there are 8 blank pages.

This book will be of great interest to AFV modelers and historians alike.
​Highly recommended.
​I want to thank the folks at Casemate Publishers for this review sample. Casemate is the North American distributor of Pen & Sword Books. All Pen & Sword titles can be found on Casemate’s website at:
www.casematepublishers.com