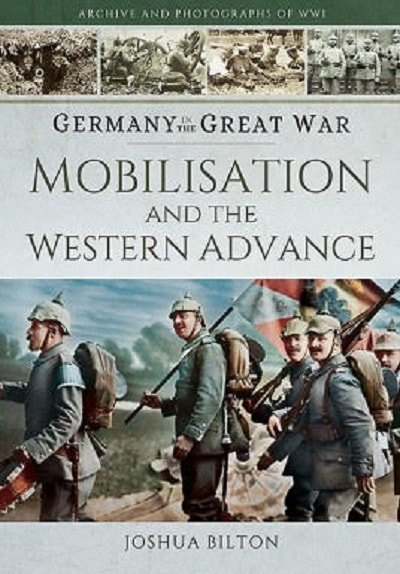 Review of Germany in the Great War
Mobilisation and the Western Advance
Archives & Photographs of WWI
Author: Joshua Bilton

The cover art shows 4 small black and white WWI photos of German soldiers in the field at the top. At the bottom of the cover art is a colorized photo of 6 German soldiers marching along carrying a flag. They all wear the spiked helmets used in WWI.

This is the first publication in a 5-part series by Josh Bilton that pictorially examines the Central Power's struggle for victory in 1914.

From mobilisation, to annexation and occupation, this book illustratively details how the German and Austrian Armies rapidly advanced on both the Western Front and the Eastern Front.

How turkey was driven back (following late entry into the war) by Russian and British forces at Basra, Dogubeyazit and Koprukoy. Also how, at sea, despite a naval arms race, which had come to dominate the pre-war era, German and British surface craft largely evaded contact. Choosing instead to wag war of attrition and blockage: a campaign that was to severely impact those on the Home Front.

This superbly illustrated book is a valuable visual archive of the Teutonic, Austro-Hungarian and Ottoman efforts during 1914.

Included within is a chronology of events, as well as a detailed mapping of campaigns on all fronts. Accompanying this is 555 black and white wartime photographs, many never before published or indeed seen anywhere.

Joshua Bilton is a graduate of the University of Reading, holding a bachelor's degree in Art. He has been interested in history as far back as he can remember. This is his first book, which will be followed by other publications - all massiively illustrated and part of the Pen & Sword anthology THE GREAT WAR ILLUSTRATED. Future volumes of Germany in the Great War will cover each year of the ensuing conflict, chronologically. He currently lives and works in the United Kingdom.

This is neat photo album. It will be of great interest to modelers and historians alike.

I wish to thank the folks at Casemate Publishing who sent me this review sample and the folks at Pen & Sword.

A complete listing of Pen & Sword books can be seen on Casemate's web site at:
www.casematepublishing.com