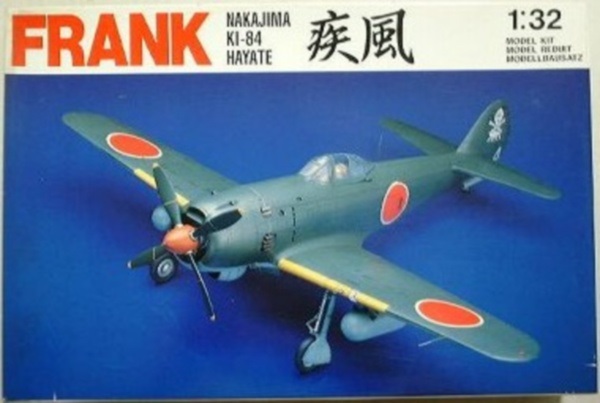 The Nakajima Ki-84 Hayate (Swift Wind) was the best Japanese Army Air Force fighter of WWII. It possessed high performance, heavy armament, self-sealing fuel tanks, and armor protection for the pilot (an unusual feature for a Japanese fighter). With the extra protection offered by the self-sealing tanks and armor, the Hayate was far less vulnerable to fire than earlier Japanese fighters.

Initial design work on the Hayate was started in April of 1942 with the first prototype being completed and ready for testing in March of 1943. Powered by a 2,000 hp engine, the Hayate prototype reached a speed of 624 km/h on its first test flight.

The Army pinned their hopes of victory on this new fighter, calling it the “Decisive Battle Fighter of the War”, and ordered the Hayate into mass production under the designation Ki-84 in April of 1944. Despite heavy bombing of the Nakajima plant by American B-29 bombers, some 3,500 Ki-84’s were completed before the end of the war.

Although the aircraft suffered a number of problems with the engine and landing gear, the Hayate proved to be a highly capable fighter, one that could opposed the latest American fighter in China, the North American P-51 Mustang. Therefore, first operational Hayate fighters were quickly delivered to Army fighter units in China, seeing action in late August of 1944.

After WWII, a captured Hayate was evaluated in the United States. In a series of tests, with high octane American fuel, the Ki-84 achieved a speed of 689 km/h at an altitude of 6,100 meters. This level of performance had never been achieved in Japan. The American evaluation report stated that the Ki-84 was the “Best Japanese Fighter of WWII”.

I had never heard of Swallow brand before seeing this kit on a vendor’s table at an IPMS contest I went to years ago. The scale interested me and the vendor allowed me to look in the box. The beautiful engraved detail sold me.

Swallow (out of Japan) I think went out of business, but Tomy brand re-released this kit under their label as kit no. HP1. Swallow also did a Zero and a George in this scale and those box arts are shown on a side panel of this box. However, no kit numbers for them is mentioned. It says that cement and paint are not included in the kit and the kit is suitable for ages 12 to adult and MADE IN JAPAN.

The other side panel shows color profiles for 3 other schemes included on the kit’s decal sheet.

1.    A Frank with the 520th Special Air Defence Fighter Group. It is in IJA green above an IJA gray undercarriage. It has a yellow leaping deer above a white number 24 on the sides of the nose and again low on the sides of the rudder. There is a diagonal red stripe outlined in white across the tail. The fuselage Japanese roundel and the ones above the wings are on white squares. Borderless roundels are below the wings.

2.    A Frank with the 73rd Fighter Group, 2nd Squadron It is overall aluminum (FS-17178) with a black (FS-27038) anti-glare panel in front of the windshield, yellow leading edges on the wings, a IJA green propeller spinner. There are 3 diagonal red stripes on the tail and the lower part of the rudder is yellow with a black border and the black number 91 on it. Roundels in all 6 positions are borderless.

3.    A Frank  with the Hitachi Teaching Flight Group. It is in khaki (FS-30215) above IJA gray undercarriage, yellow wing tips, black anti-glare panel. Fuselage roundels and above the wings have white borders. Below the wings are borderless. On the tail is a logo that is a red and white winged circle that has red horizontal stripe over the white wings and a white Japanese character in the circle. Below that is a white  horizontal line with a white number 63 below it.

The box art shows a full color photo of the model made up. It is in the markings of the Japanese Armies 56th Kamikaze Attack Group. (one of the options on the decal sheet).

It is in overall Imperial Japanese Army (IJA) green (FS-34079) above a IJA gray (FS-26307) undercarriage. There is a white skull and cross-bones insignia on the rudder with a white 4 below it. The leading edges of the wings are yellow (FS-22544) and the propeller spinner is brown (FS-20062). Large Japanese roundels are outlined in white and on the fuselage sides and upper wings. Below the wings the roundels are borderless.

Inside the box are two large sealed cello bags. One of the cellos holds four large light gray trees of parts.

The second sealed cello holds the huge decal sheet and the clear parts.

The instructions are a single large sheet that accordion folds out into six pages in 5 ½” x 11 ¾” page format.

Page one gives the history of the Frank in English, followed by general instructions in English and three other languages.

Pages two to three give a total of seven assembly steps. This is very few, considering the scale of the kit.

A pilot figure and optional drop tanks are provided.

Unfortunately, all control surfaces are molded solid and cannot be posed at an angle unless you do surgery.

Except for the overall bare metal scheme, the rest are dark green over light gray bottom.

The parts trees in the kit are not alphabetized. They do have part numbers next to the parts on the sprues however. This means that you are going to have to keep trying to identify these parts by searching the two sprues with multiple parts on them. The other two sprues will be easy, as they only hold the fuselage halves and the upper and lower wing parts. There are also no parts trees illustrations in the instructions. Bad move Swallow and this will make the building job a little tedious.

Swallow does call out the colors of individual parts as you do assembly. This is a good move. 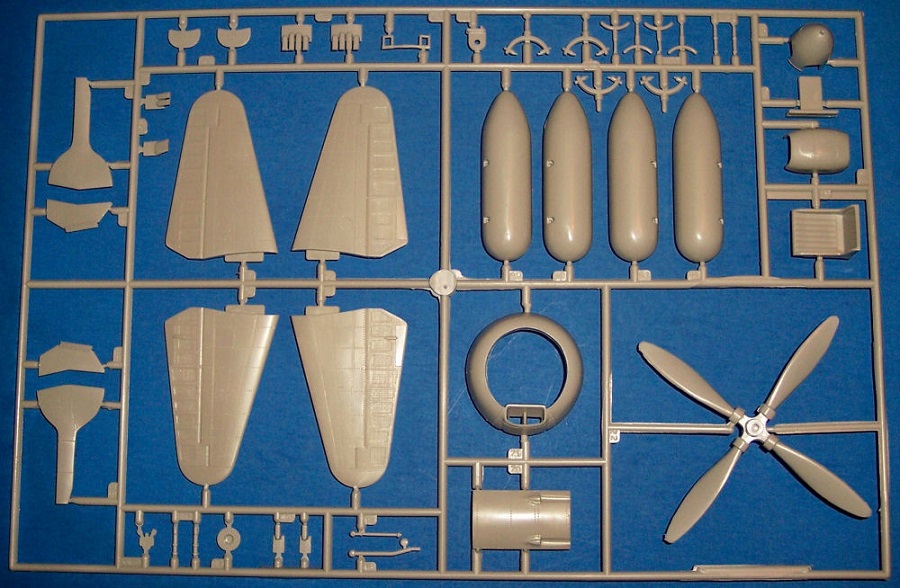 The second large light-gray tree of parts holds: the landing gear legs, wheels, instrument panel, cockpit tub and floor pieces, tail wheel, engine, pilot figure etc. (43 parts). Strangely, there are two sets of tires. However, the ones marked as part numbers 57 & 58 don’t seem to be the set to use on this kit. I suppose they are spares. 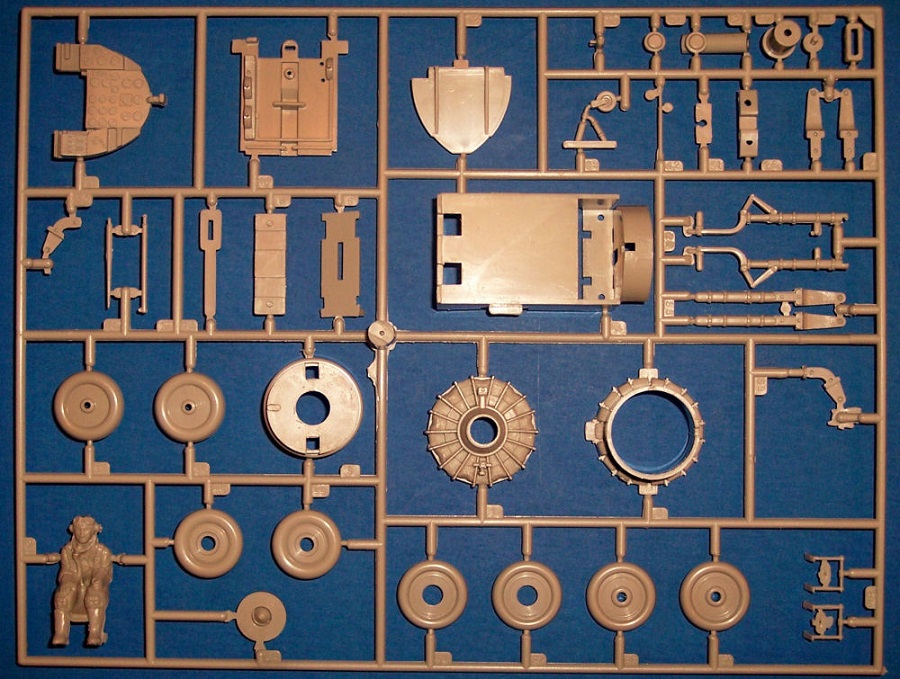 The next tree is the two light-gray fuselage halves. 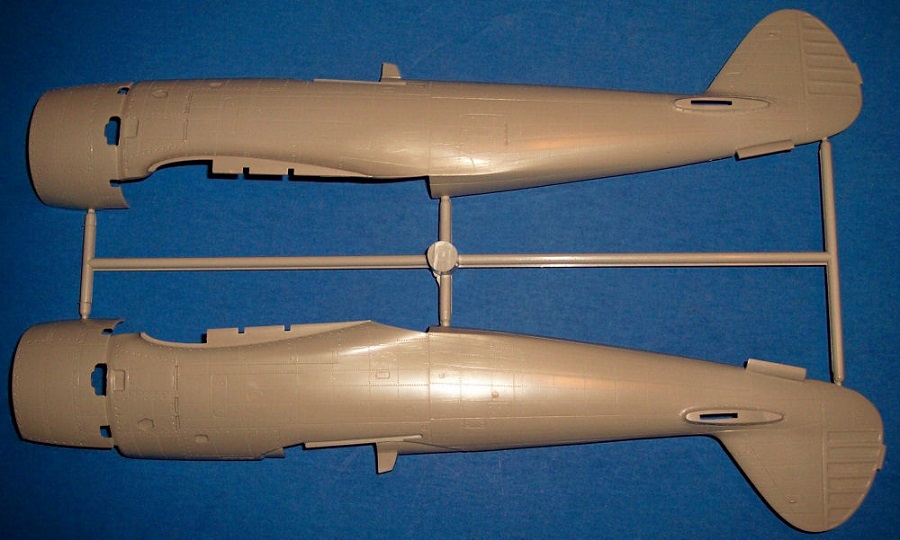 This is followed by the light gray three with the upper wing halves and full span lower wing part. This is a nice way of doing the bottom piece, because it sets the dihedral at the right tilt. The wheel well detail molded into it is also beautiful…as is all the engraved panel lines and rivet detail. Fabric molding on the flaps is also top notch. However, all control surfaces are molded solid and would take surgery to re-position. 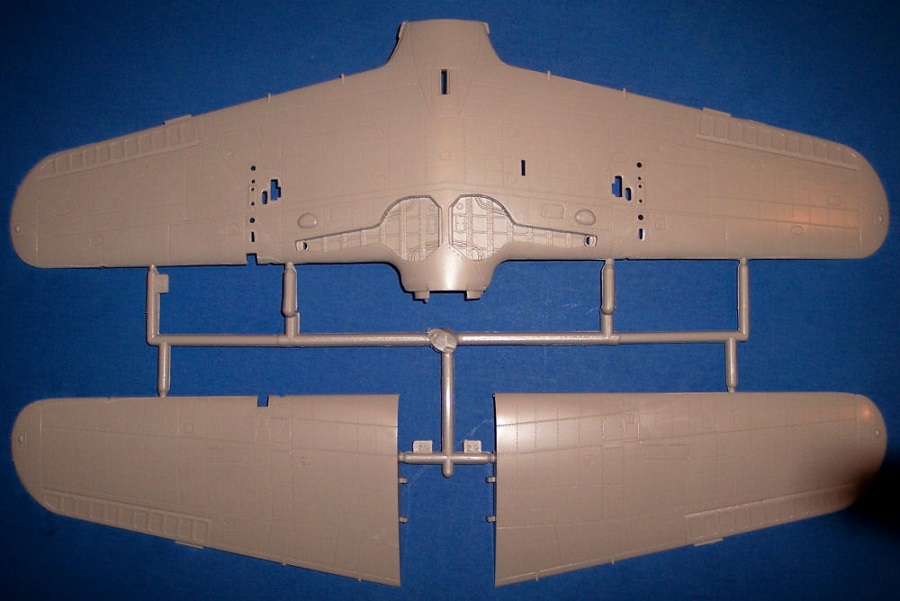 The clear parts tree holds the 3 canopy windows and a wing leading-edge light lens. However, the formation lights on the wing tips are molded into the wings. It would have been nice, especially on a kit this scale, to have those clear too. The canopy by being in 3 pieces can be posed open to show the cockpit interior and pilot figure. 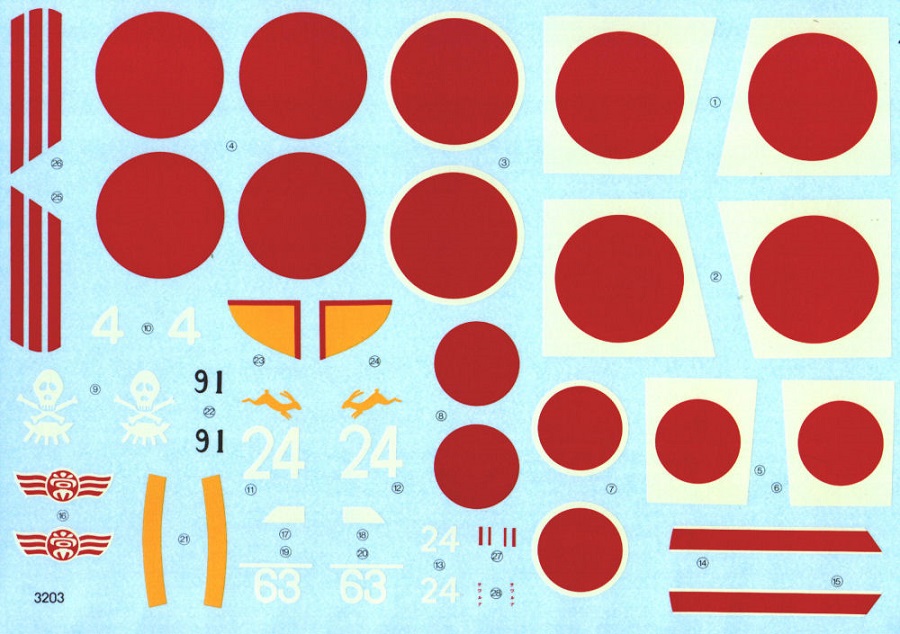 I think this kit is very well detailed. Only some seat belts are needed in the cockpit. I’m sure that there are probably some after-market sets out there for this one too someplace?

Recommended to modelers that like the larger scales…like I do.

Kit as I said earlier was courtesy of my wallet.