The Japanese aviation industry was proud of high technology in several aircraft developments, such as the A6M Zero fighter in WWII. However, the defeat of WWII brought restriction on development and production.

The restriction was lifted in the year 1952. In the period of 7 years, the world's aircraft technology made a lot of progress in jet aircraft. To the Japan aviation industry, that was a blank of 7 years.

It was the T-1 jet trainer of JASDF that filled the blank and became the first step to achieve a great revival.

The development f the T-1 started from 1955, one year after the JASDF was established. The defense agency decided on a new jet trainer procurement plan.

The prototype was completed in November, 1957. The first flight was successful on January 19, 1958. After that, the flight test program was completed successfully, and in 1959 the T-1A mounted with Orpheus engine type was the formality and went into mass production.

The first mass production type was delivered in September 1960. The T-1A, which is mainly deployed in the 13th Flying Training Wing began to serve as an important role to raise new pilots.

On the other hand, the domestic jet engine J3, which was delayed in development, was also delivered as a prototype engine in 1960, and was mounted on the T-1A, and the first flight was in May 1960.

The T-1 equipped with domestic jet engine started mass production as T-1B. A total of 20 T-1B's were built form the first mass production in September, 1962 until June 1963.

A total of 40 T-1A were built, and until the last T-1B aircraft was finished its role in 2006, the T-1's were active in training the pilots of the JASDF for nearly half a century.

Platz is a prolific model company based in Shizuoka City, Japan. They manufacture all manner of model subjects in the popular scales.
This kit comes in an un-wrapped tray and lid type box.

The box art shows a T-1B flying above the clouds. It is overall white with a red stripe along the whole length of the sides of the fuselage, red wing and elevator leading edges, orange wing, rudder and elevator tips, a orange ring around the nose and a black anti-glare panel in front of the windshield and it has grey wing walks. It has black fuselage number 852 under the cockpit. On the rudder there is a blue and white logo over a black serial no. 25-5852.

One corner of the box art says that the decals are by Cartograf brand in Italy.

One side panel of the box has a one-paragraph history of the T-1B in English and Japanese, followed by features of the kit in the two languages: 1/72nd scale plastic model kit, total length 168 mm. total width 145 mm, well detailed with accurate panel lines, compromised its realistic detail with easy assembly, external fuel tanks included for option to assemble, silk-screen printed decals by Cartograf.
​This is over the copyright date of 2018 for the kit, Platz's street address in Shizuoka City, Japan, MADE IN JAPAN, and their telephone and FAX numbers. A small color side view of the T-1B appears in the same color scheme as the box art, but with the black fuselage no. 860 under the cockpit and black serial no. 35-5860 on the side of the rudder.

The other side panel has a small color photo of the model made up with the fuselage no. 860 and a color photo of a real T-1B sitting on a runway with ground crewmen walking around it, also with 860 on the nose.
​This is followed by features of the kit in Japanese and English: "This is a plastic un-assembled scale model kit, glue and paint are not included, some parts are extremely sharp, handle with care, do not use paint and glue near a flame, kit is suitable for modelers over the age of 15".  This is partially repeated in French and Platz's web address is provided.
​The bottom of the box has a color 4 view of a T-1B in the same scheme as the box art scheme, but with the fuselage no. in black of 852.

This kit contains 3 medium-grey parts trees and a clear tree in a sealed clear cello bag, a large decal sheet in another cello bag with a tissue to protect its face from scratching and 2 instruction sheets.

Both the instruction sheets are single-sheets printed on slick-coated paper and folded in the center to create 4 pages in 7" x 10" page format.

The page one of the first sheet begins with a black and white repeat of the box art, over the history of the T-1B in Japanese and English, more Japanese text and Platz's telephone and FAX numbers.

Page 2 through 4 give a grand total of 9 assembly steps.

The second instructions is the painting and marking guide. It consists of two pages with full color illustrations and 2 pages that are blank.

​The first page has a 4-view of the box art scheme (already described above).

These are over a repeat of the photo of the real no. 860 and a suggested paint color listing of Mr. Color and Model Master brands of hobby paints and the parts trees illustrations. 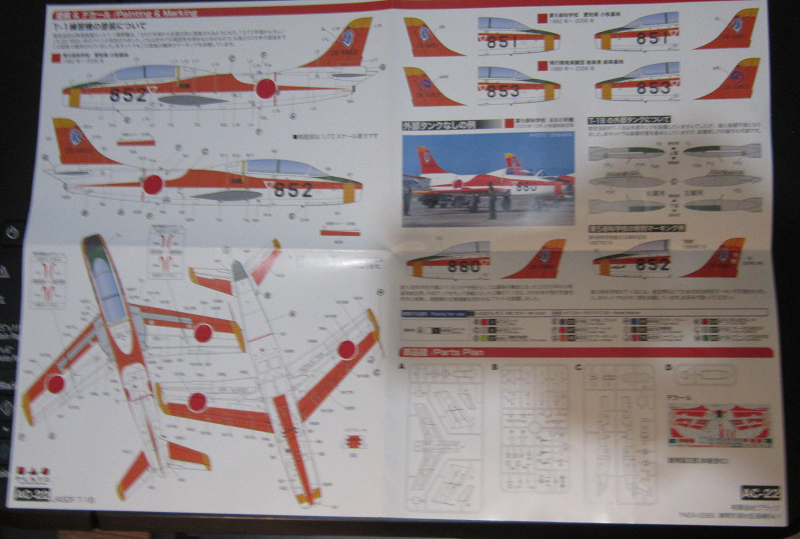 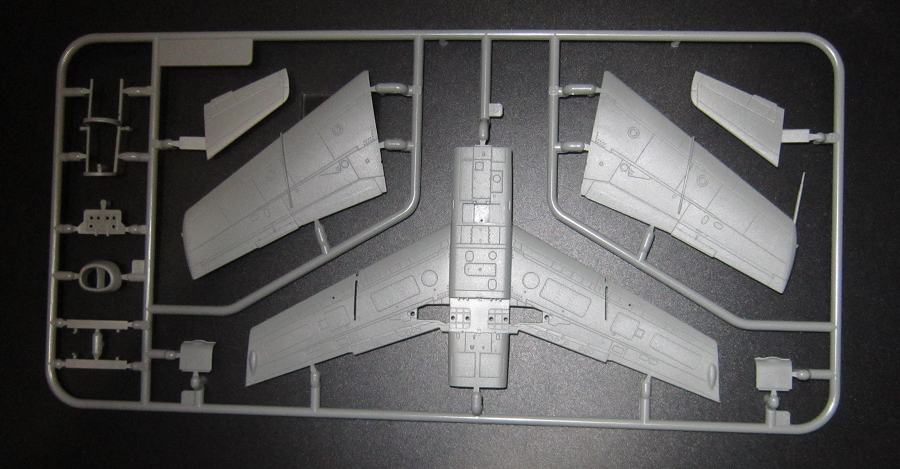 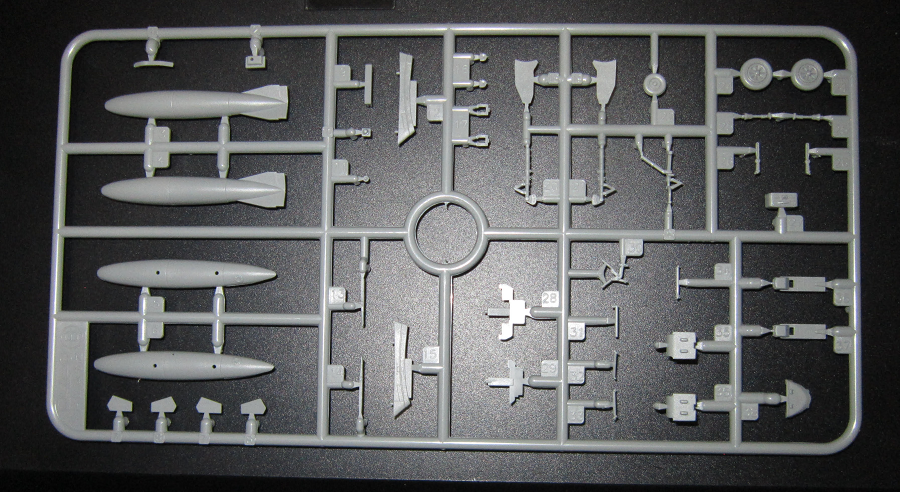 ​There are no crew figures included. panels are all engraved and the flaps are all molded solid.