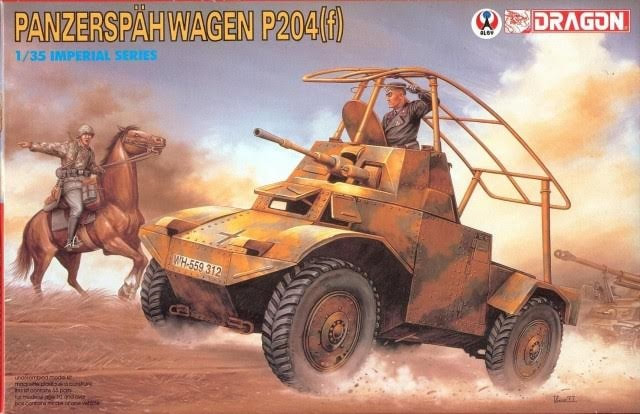 The Panhard 178 (officially designated as Automitrailleuse de Découverte Panhard modèle 1935, 178 being the internal project number at Panhard) or "Pan-Pan" was an advanced French reconnaissance 4x4 armoured car that was designed for the French Cavalry before World War II. It had a crew of four and was equipped with an effective 25 mm main armament and a 7.5 mm coaxial machine gun.

A number of these vehicles were in 1940 taken over by the Germans after the Fall of France and employed as the Panzerspähwagen P204 (f); for some months after the armistice of June production continued for the benefit of Germany. After the war a derived version, the Panhard 178B, was again taken into production by France.

DML Dragon is a prolific model company based in Hong Kong China. They manufacture all manner of model subjects in the popular scales.

The box is very blousy inside with a large letter L void around the parts. Only the instructions fit the box and if it had of been folded would not have taken any more space up than the parts. 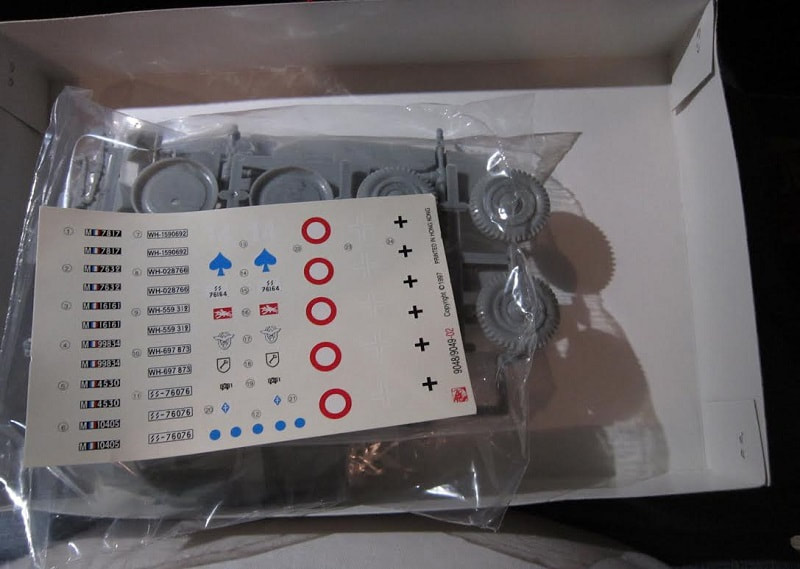 ​The box art shows a P204(f) passing a German soldier on horseback.

The armored car is overall earth yellow. It has a banister type radio antenna. The licensed no. on the nose of it is WH-559 312. There is a narrow German cross on the glacus plate. The commander is looking out orf the top hatch. He is wearing a black Panzer uniform. There are a couple other German tanks behind him barely shown.

The horseback rider is wearing a camouflaged smock over field grey pants tucked into black jack boots. He has a lot of field equipment hung on his belt and saddle. He is pointing with his right arm in the direction that the armored car is going.

There is a round sticker on the corner of the box art, next to Dragon's logo. It says AL-BY in black letters under a logo of what looks like a black Eifel Tower with red wings. This sticker is also on each end of the box and one side panel. I don't know what it stands for?? I went on Missing Linx's web site and looked it up under LINKS which shows model companies and it does not appear anywhere there.

One side panel as a color box art of kit. no. 9044, a German DAK Pz.Kpfw. IV Ausf. F-1, followed by a CAUTION telling you that when you use glue or paint to be in a ventilated room. This is in 6 languages, including English.

​ The kit is not suitable for children under 3 due to small parts, said in multiple languages, including English. It is designed for modelers over 10 years of age. The copyright of the kit is then given as 1997, over DML's street address in Hong Kong, China and the kit was made there.

The other side panel has 3 color walk-around photos of the model made up in the box art scheme, followed by a repeat of DML's address.

The instructions consist of a single sheet that accordion-folds out into 8 pages in 7" x 10" page format.

Page 1 of the instructions begins with a black and white repeat of the box art, over the parts trees illustrations.

Page 2 begins with CAUTIONS about the kit in 6 languages, including English, over international assembly symbol explanations and a suggested color listing of Gunze Sangyo and Italeri brands of hobby paints.

The bottom of the page has the 1st assembly step.

Pages 3 through 6 give a grand total of 8 assembly steps.

Page 7 has a 3-view of the P204(f) in overall RLM sandy brown 79 with a small German cross on the sides of the hull. No unit is mentioned.

Page 8 has a 2-view showing the front and rear of the armored car. It is a continuation of the scheme on the previous page and shows the box art subject. It has small German crosses on each one of the rear fenders.

The bottom of the page repeats the copyright of 1997. Printed in Hong Kong over decal application instructions in 6 languages, including English.

The decal sheet has markings and license plates for both Germany and France. Unfortunately, placement of the French marks is not illustrated in the instructions.

There are 12 license plate numbers for France and 11 for Germany to choose from. Also some division markings for Germany and large skeletal crosses.

DML really needed to illustrate where this stuff goes better. 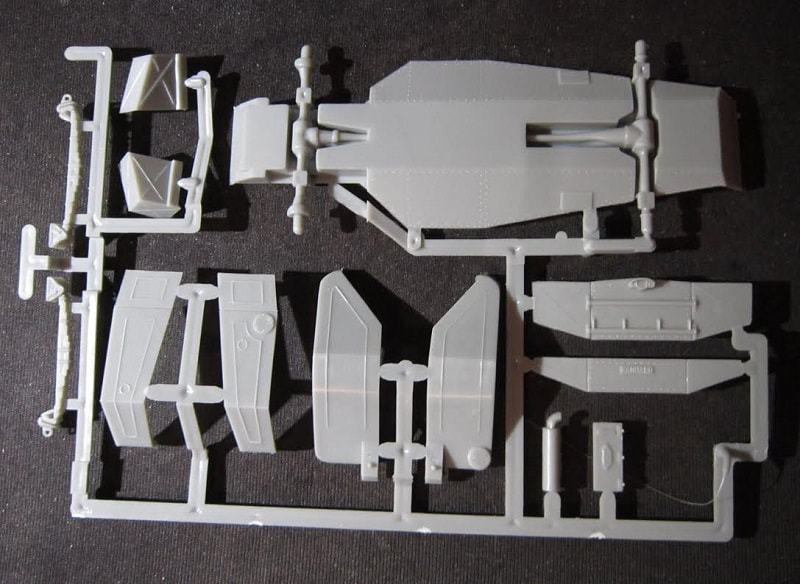 ​Medium grey letter B is the hull top. 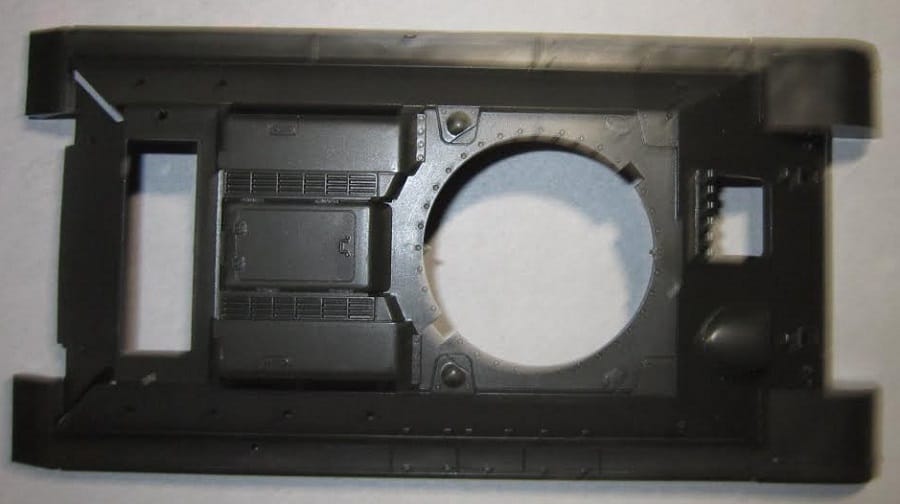 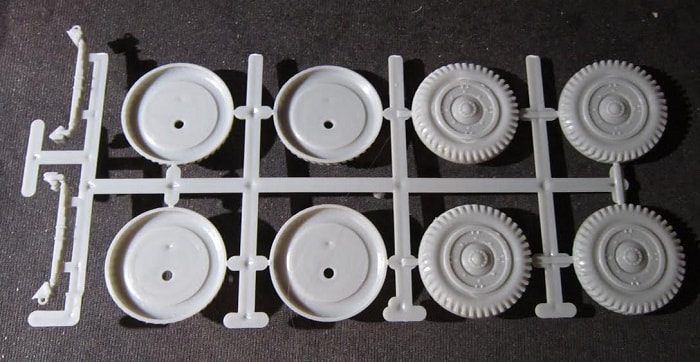 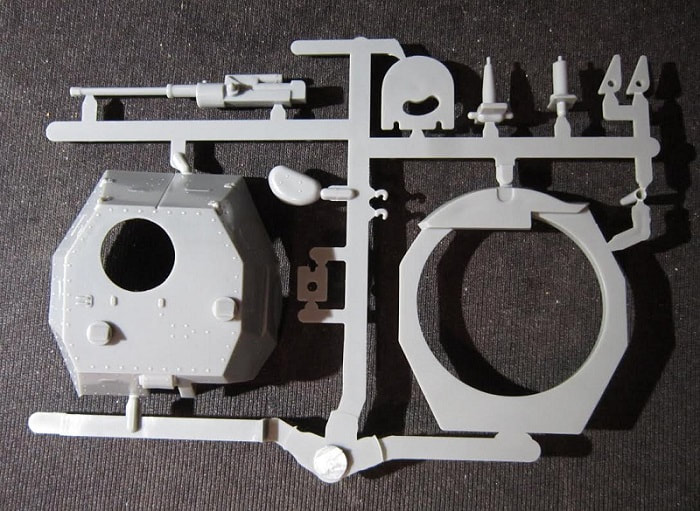 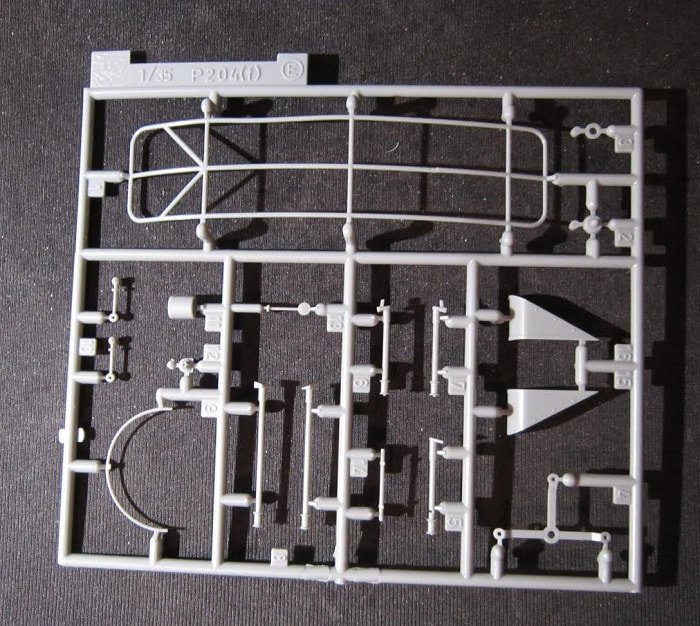 The last item is the decal sheet. 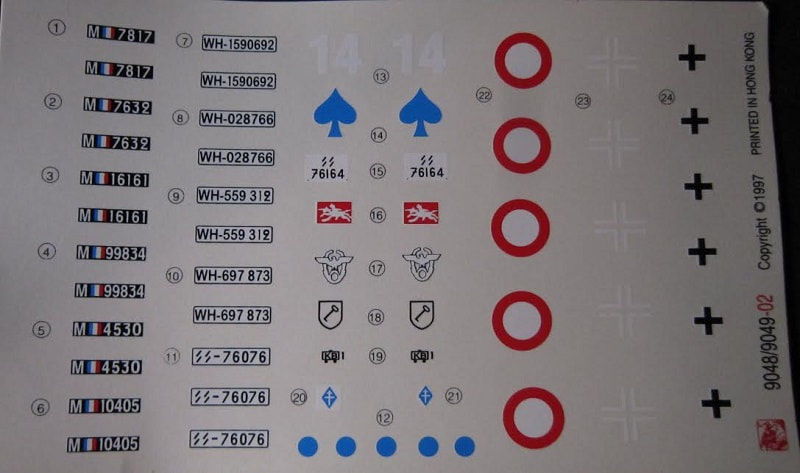 There is no commander figure included or clear parts and no interior details.

Actually, with so few parts, this kit is definately an easy build and great for the beginning modeler.

I had this kit by another company as just called the French Panhard. That kit came with railroad wheels and track. I built it and my kids destroyed it.

Looking at the layout of this Dragon kit, I strongly suspect that it is the same molds that they acquired from the other model company. I cannot remember who that was ??

I must say I think it was overpriced and I paid too much for it.

​I purchased my kit at my local hobby shop back in the 90's.