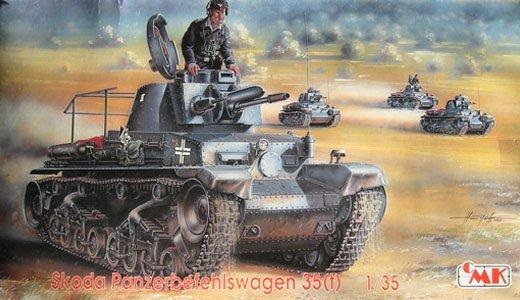 The LT-35 or LT vz. 35 was a Czechoslovak light tank used by Nazi Germany during WWII, under the designation Panzerkampfwagen 35(t) (Pz.Kpfw. 35(t)) and commonly refered to as the Panzer 35(t).

The LT-35 had a conventional tank design for the late 1930’s, with riveted armor, a two-man turret, and rear-engine and drive. The main armament was a Skoda vz 34, a 37mm gun operated by the tank commander, for which 72 rounds were stored on board.

A coaxial 7.92 machine-gun was fitted as well. The second crewman, in the turret, was the loader for the main gun. In the front hull sat the driver to the right side with the bow machine-gunner, who also served as the radio operator, to his left, manning the 7.92mm machine-gun fitted in the front armor plate. A total of 1,800 rounds of 7.92 ammunition was carried.

The Skoda 6-cylinder engine produced 120hp. It was mounted in the rear along with the 6-speed transmission and drove the rear drive wheels. Eight road wheels, on four bogies, carried the tank, with a single front idler, and four track return wheels. Both transmission and steering were mechanically assisted with compressed air, reducing driver fatigue. This last feature proved problematic in the extreme conditions encountered on the Eastern Front.

The LT vz 35 was constructed in the Czech Skoda Works, and production proceeded from 1936. Eighty were built by CKD in 1937. Total production was 434, including 298 for the Czechoslovak Army, 126 for Romania (under designation Skoda R-2) and ten for Bulgaria (as the T-11). The Czechoslovak Army had place the initial order for the S-II-a in October of 1934, and had rushed development of the tank despite a great number of faults that came to light. The first production order for 160 tanks was placed on 30 October 1935, and deliveries began in July 1936. The Czechoslovak Army placed a follow-on order for 103 in November 1937, and a third order for 35 in 1938. In August 1936, Romania placed an order for 126, these were delivered in May 1937. Afghanistan ordered 10 in 1938. The Afghan vehicles were exported to Bulgaria in 1939 on German orders. The Wehrmacht used 219 vehicles, captured from the Czechoslovak Army in March of 1939.

This kit comes in a shrink-wrapped end-opening type box. I am no fan of these, as parts tend to find a way out past the end flaps and get lost. Usually it is the decal sheet. In the case of this kit I lost the PE set…groan.

The boxart shows a Panzerbefehlswagen 35(t), command tank, leading a group of 3 Pz.Kpfw. 35(t)’s across a grassy field leading 3 other 35(t)’s.. It is in overall panzer gray. It carries a narrow skeletal type German cross in white on the very forward point of the side of the hull. Just behind this is the yellow division marking for 6 th Panzer Division. On a black rhombic shaped plate on the sides is the white letters A03. There is a very unusual white marking on the sides of the turret that looks like a stylized letter “Z” insignia. I have never seen this before, and don’t have a clue as to what it stands for. Perhaps some reader out there does? A commander figure stands in the cupola wearing a SS uniform with the sleeve eagle and a worded cuff band. He has a side cap on his head and earphones. Unfortunately, there are no figures in the kit.

I have to say that I think that the division symbol, which is an upside down letter “Y” with two dots to the left of it in yellow is WRONG!  My references show that the 6 th Panzer Division symbol had the two dots to the right, not the left. This division mark is correct on the decal sheet anyway…and I believe that the 6 th was not an SS unit, so the figure on the boxart is dressed wrong too. On one side panel is one paragraph histories of the vehicle in 3 languages: Czech, German and English. On the other side panel is 3 paragraphs giving the features that are in the kit, in the same 3 languages. These are labeled with color illustrations of the Czech, British and German flags.

Inside the box are 3 large dark gray parts trees, 1 large light gray tree and a small off-white parts tree, some tan resin jerry cans, the decal sheet and a small fret of brass PE (these last two items in a small cello bag). All this is in a large sealed cello bag. The instructions complete the kit’s contents.

Page 1 of the instructions begins with a profile line drawing of the Pz.bflw. 35(t), followed by the history of the vehicle in Czech, English, German and French.

Page 2 begins with the parts trees illustrations, followed by international assembly symbol explanations and a listing of Humbrol and Tamiya brand paints, suggested for use to finish the model.

Page 3 through 9 gives a total of 24 assembly steps.

Page 10 has two painting and marking schemes shown as 2-views.

A Pz.Bflw. 35(t) of the 3 rd Panzer Abteilung 65, 6 th Panzer Division, Oberleutnant Marquart’s vehicle, France 1940, Russia June 1941. This is the boxart painting already discribed above. It is in overall Panzer gray.

A Pz.Bflw. 35(t) of the 1 st Panzer Abteilung 65, 6 th Panzer Division, personal vehicle of the commander of the 65 th; Oberleutnant Schenk, France, summer 1940, Russia, June 1941. It is also in overall Panzer gray with the same cross and division mark. It has the black rhombic plate too, with A01 in white on it. It does not have that odd letter “Z” looking symbol on the turret though.

Large dark gray letter A parts tree holds: the fenders, turret parts, cupola, front drive’s plate, rear hull deck roof and back panel, tools headlight, jack etc. (24 parts) Oddly, the parts trees illustrations says that there are two of these. Actually, there is only one tree. 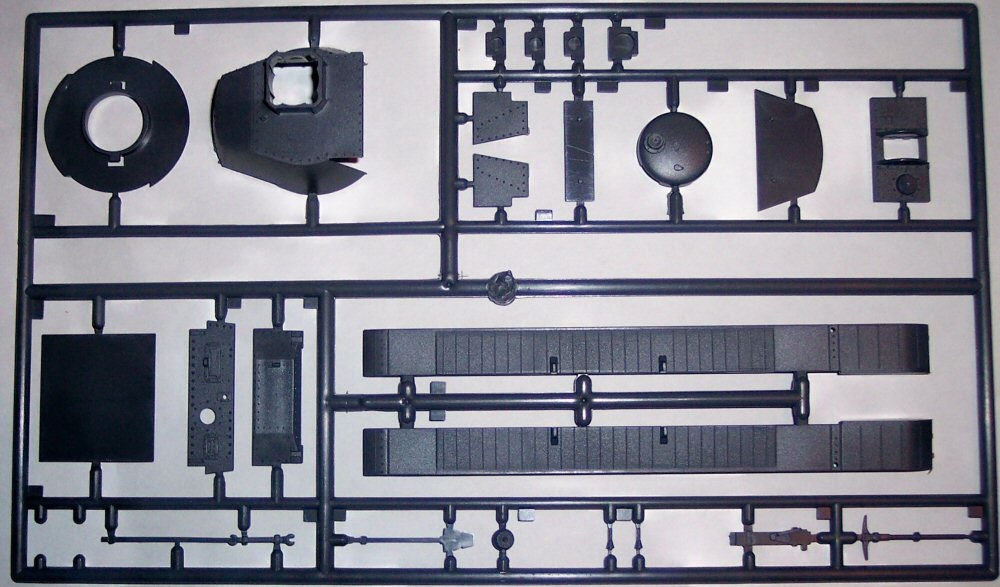 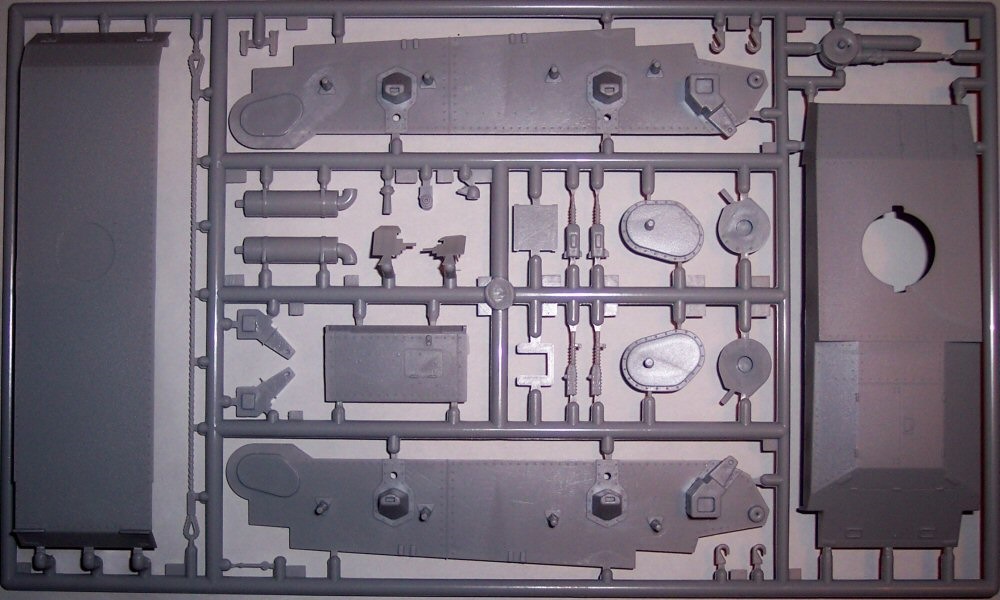 There are 2 identical dark gray letter C parts trees (I think CMK meant to put the “2x” with the parts illustration for this tree, instead of the letter A tree drawing). It holds: the bogies, link and length type tracks, road wheels, drive sprockets, idler wheels and return rollers (66 parts per tree) 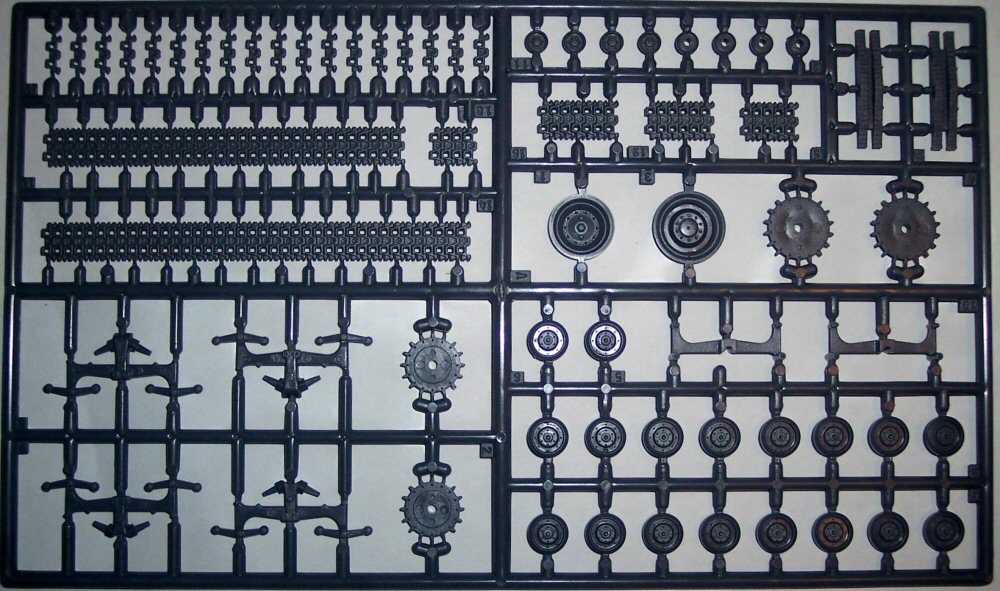 Next is the tan resin jerry cans. There are five of them on the pour plug with a single small part that I cannot identify yet. The handles will have to have the resin whittled out below each handle. This, I am sure, will be tricky – to say the least. 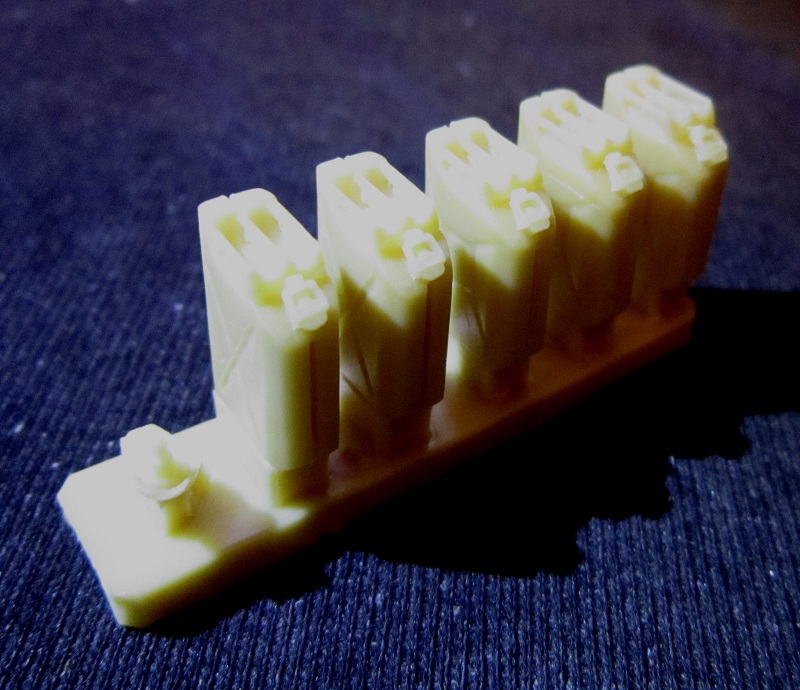 Final item is the small brass PE fret. It holds: 3 x rhomboid shaped plates (I’m thinking there should be 4 of these) and 2 jerry can racks to be assembled (12 parts) 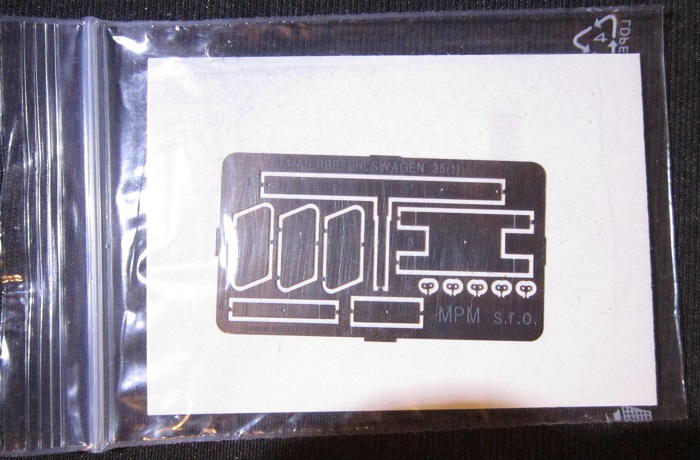 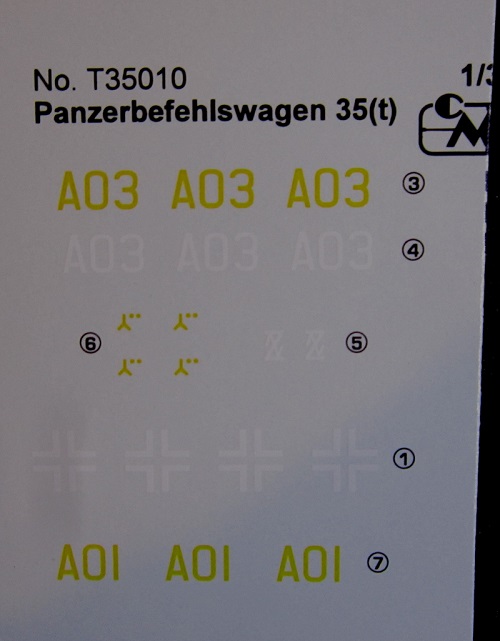 This is a neat Czech tank, used extensively by the Wehrmacht in the early stages of WWII. There are no crew figures in the kit and no interior parts. I highly recommend this kit to modelers that have a few other tank kits under their belts that included resin and PE parts.