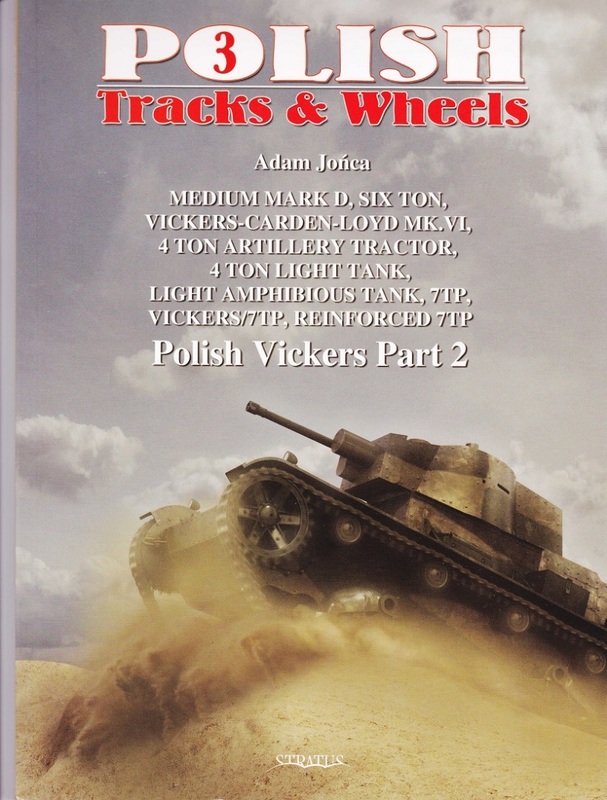 This new book was sent to me directly from Stratus in Poland. It was wrapped in cardboard sheet and inside a bubble wrap lined envelope to protect it in the mail. Very well packed.

This new book complements the well-established and successful “Polish Wings” series on aircraft in the Polish Air Force. This book is the third in a series on Polish Army vehicles and is the 2nd volume about Vickers tanks.

It tells the story of four major tanks of Polish origin used by the Polish Army in the 1930’s, some still in use at the time of the German invasion.

Training and operations with these tanks are described and illustrated with 190 black and white wartime photos. There are 17 full color profiles included. These are of:

There are 2 black and white photos of 2 different 7TP engines and line drawings of the 7TP chassis out of a technical manual.

On the last page of the book are two 3-view line drawings in 1/72nd scale of the 7TP twin-turreted and the single-turreted tanks.

The cover arts of the first 2 Stratus Polish Tracks & Wheels books are shown inside the book and again on the rear cover.

This book will be of interest to military historians and modelers alike. Highly recomended.

I want to thank Dr. Roger M. Wallsgrove, Editor in Chief of Mushroom Model Publications (MMP) and the folks at Stratus in Poland for this review copy.

MMP and Stratus books are available from all good bookstores, or direct from MMP at:

The North American distributor is Casemate