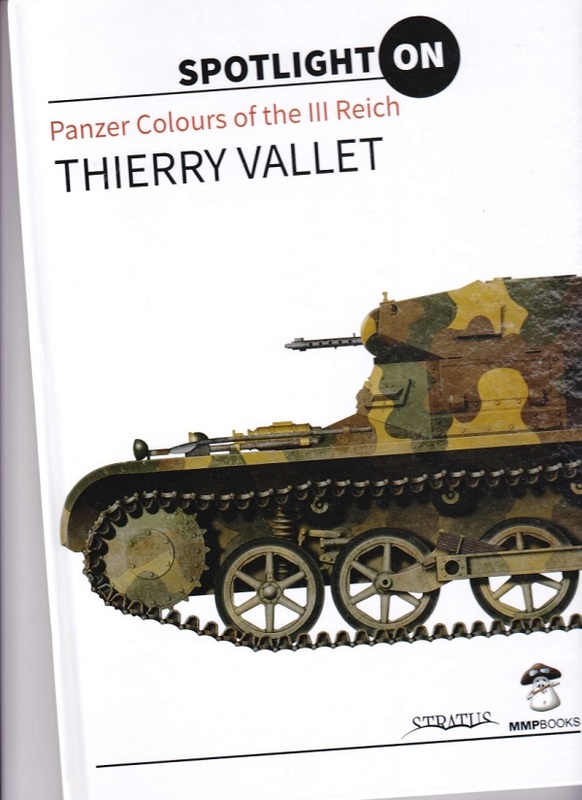 Review of Panzer Colours of the III Reich
Spotlight on
Author: Thierry Vallet

MMP –Stratus Publications
ISBN: 978-83-63678-73-9
By Ray Mehlberger
MSRP: $35.00
In July 1918, the first standardized camouflage scheme was referred to as Buntfarbenanstrich 1918.. The scheme consisted of simple polygon-shaped patches of brown, green and ochre, painted over the feldgrau base color. Usually, the polygons were separated by thick black lines.

Between 1927 and  1937, a new colorful paint pattern was introduced. The pattern used three colors: Erdgelb Nr. 17 (yellow- brown), Braun Nr. 18 (brown), and Grun Nr. 28 (green) Colors were sprayed onto vehicles in a wavy pattern, with a different pattern for each vehicle. The borders were to be either feathered, or bordered by black lines.

On 19 July 1937, it was ordered to change the camouflage pattern to Dunkelbaun Nr. 45 (black brown) and Dunkelgrau Nr. 46 (panzer grey), with feathered edges. Dunkelgrau Nr.46 was the base coat and a wavy pattern of Dunkelbraun Nr. 45 was to be spray painted onto one third of the surface.

From 31 July 1940, it was ordered that armored vehicles should only be painted Dunkelgrau.

In March 1941, the base color of Afrika Korps tanks was Gelbbraun RAL 8000 (yellow-brown) and/or covered by Graugrun RAL 7008 with feathered edges. Some Tigers and Panzer III’s in Tunisia were an overall medium olive green, possibly from Italian paint.

In February 1943, all vehicles were ordered to be painted in a base coat of Dunkelgelb RAL 7028 (yellow sand), completed with stripes of Rotbraun RAL 8017 (red brown) and Olivgrun RAL 6003 (olive green). This three-color disruptive camouflage was infinitely variable in color, depending on the dilution of solvent.

A spray gun was usually used and vehicles displayed large variations in pattern, coverage and color density. This practice continued after tanks were covered with anti-magnetic Zimmerit starting in August 1943.

On 19 August 1944, it was ordered that all vehicles were to be painted at the factory. The pattern “Hinterhalt-Tarnung” (ambush camouflage), still used a base of Dunkelgelb, with Rotbraun and Olivgrun stripes. On top of each color, small dots of the other two colors were applied.

Depending on the factories, there were two types of ambush camouflage: one, used by Maschinenfabrik Augsburg-Numberg (MAN)  and Maschinenfabrik Niedersachsen-Hannover (MNH), the second by Daimler Benz.

In mid-September 1944, tanks started leaving the factories in their red oxide primer, with different camouflage schemes based on Dunkelgelb RAL 7028 and Olivgrun RAL 6003 with shade variations.
From November 1944, tanks began to receive a base coat of Dunkelgrun RAL 6003. A camouflage pattern was to be created at the assembly plant by spraying (or not) Rotbraun or Dunkelgelb in sharp contours.

While the colors were standardized,. There were many shade variations due to different application methods, climate, dirt, dust etc. For example, Dunkelgelb has a tendency to turn darker over time. Today, it’s impossible to determine color or shade from black and white photos, but they can be useful in determining camouflage patterns created with contrasting color paints.

Mushroom Model Publications (MMP) is based in the UK. All their books are printed by their associate Stratus in Sandomierz, Poland in the English language. Stratus also publishes their own line of books in both Polish and English.

The artwork is all done by the author Thierry Vallet. He is a native of Lyon, France, where he currently lives and works as an IT engineer.

He has always been interested in WWI and WWII history (uniforms, aircraft and vehicles). In 2008, he decided to make his own profiles of vehicles and created Kameleon-Profil.fr.

His second passion is for computer graphics and digital art and he uses it in French, Spanish and Polish publications.

There are 41 color profiles by Vallet in this book.

The first page introductory and the profiles are all spread across the height of the pages. So you have to turn the book sideways to view them.

The second page of the book has color camouflage pattern swatches.

On each page with the tank being profiled there are color swatches of the colors used in the camouflage pattern. Neat!!

The camouflage and artwork on these profiles is beautiful. They will be of great interest and value to German AFV modelers and historians as well.

I want to thank Roger Wallsgrove Editor-in-Chief of MMP and the folks at Casemate that sent me this review sample.

Casemate is the N. American distributor for MMP books and a listing of all their titles can be seen on their web site. Very highly recommended.