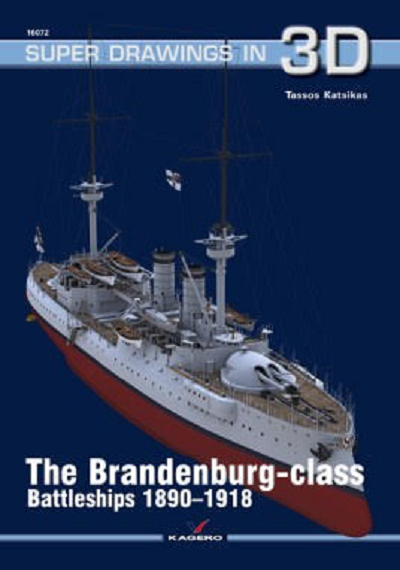 The Brandenburg-class consisted of four pre-dreadnought battleships built for the German Kaiserliche Marine (Imperial Navy), the first modern battleships of the fleet.

The four ships of the class—Brandenburg, Wörth, Weissenburg, and Kurfürst Friedrich Wilhelm—were the first ocean-going capital ships built for the German fleet in nearly two decades, owing to reluctance in the Reichstag (Imperial Diet) to fund large projects.

They followed a series of small coastal defense ships, and though in retrospect they anticipated the buildup that created the High Seas Fleet, they were ordered as part of a construction program that reflected the strategic and tactical confusion that affected many navies in the 1880s.

The design process that resulted in the Brandenburg class was very lengthy, the result of that confusion, with a wide range of proposals that ranged from outdated casemate ships to versions with two twin-gun turrets placed side by side.

The designers ultimately settled on ships that were armed with an unusual main battery of six 28 cm (11 in) guns at a time when all foreign battleships were built with four or fewer heavy guns.

All four ships served with I Squadron of the German fleet for the first several years of their careers, with Kurfürst Friedrich Wilhelm the squadron flagship.

During this period, they conducted routine training exercises and visited foreign countries, frequently in company with Kaiser Wilhelm II aboard his yacht.

In 1900, they were deployed to China to help combat the Boxer Rebellion, but they arrived after the bulk of the fighting was over and thus saw little action there.

After returning to Germany they were modernized beginning in 1902, thereafter resuming their peacetime activities. In 1910, Kurfürst Friedrich Wilhelm and Weissenburg were sold to the Ottoman Navy and were renamed Barbaros Hayreddin and Turgut Reis; Brandenburg and Wörth remained in service with the German fleet until 1912, when they were laid up.

The now-Ottoman ships saw extensive service during the First Balkan War, providing [naval gunfire support|fire support]] to Ottoman ground forces fighting in Thrace, as well as engaging the Greek fleet at the Battles of Elli and Lemnos in December 1912 and January 1913, respectively.

Following the outbreak of World War I, the German ships were reactivated for use as guard ships protecting the German North Sea coast.

Barbaros Hayreddin was torpedoed and sunk by the British submarine HMS E11 in April 1915, though the other members of the class survived the war.
Brandenburg and Wörth were disarmed and reduced to secondary duties, eventually being broken up in 1919, while Turgut Reis lingered on as a training ship until 1933, when she became a barracks ship, a role she filled until 1950, when she was sold for scrap and slowly dismantled over the following decade.

Kagero is a book publisher based in Lublin, Poland. They do their books is both Polish and English. This book is in English.

The book comes in a self-sealing clear cello envelope.

The cover art shows a color over-head bow on view of the Brandenburg battleship, posed against an all-dark blue background.

The back cover art shows a overhead stern on view of the Brandenburg, also against an all-dark blue background, with Kagero's web address at the top.

The book contains 137 color 3D walk-around type illustrations of every inch of the Brandenburg's anatomy.

This book will be of great interest to modelers that want to do a model of the Brandenburg battleship, if ever a plastic model of it is produced by anybody.
Otherwise, it is a great picture book that shows every inch of the battleship and is highly recommended.