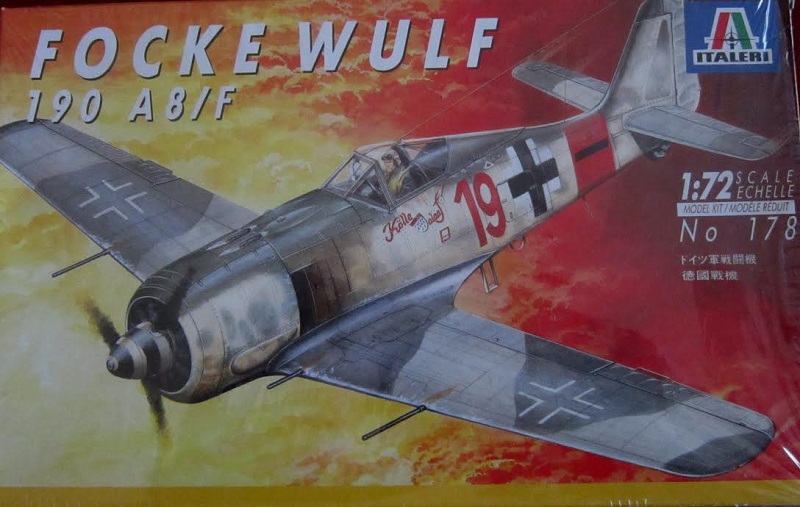 MSRP: OOP ($6.00 at local hobby shop now long out of business back in 80’s)
HISTORY:
The Focke-Wulf Fw 190 Würger (English: Shrike) is a German single-seat, single-engine fighter aircraft designed by Kurt Tank in the late 1930s and widely used during World War II.

Along with its well-known counterpart, the Messerschmitt Bf 109, the Fw 190 became the backbone of the Luftwaffe's Jagdwaffe (Fighter Force).

The twin-row BMW 801 radial engine that powered most operational versions enabled the Fw 190 to lift larger loads than the Bf 109, allowing its use as a day fighter, fighter-bomber, ground-attack aircraft and, to a lesser degree, night fighter.
​The Fw 190A started flying operationally over France in August 1941, and quickly proved superior in all but turn radius to the Royal Air Force's main front-line fighter, the Spitfire Mk. V,[3] especially at low and medium altitudes.

​The 190 maintained superiority over Allied fighters until the introduction of the improved Spitfire Mk. IX in July 1942.[4]

It remained a formidable foe in the west until the arrival of the P-51 Mustang in large numbers in 1944; the Mustang easily outperformed the Fw 190 at high altitudes, but the German pilots were forced to fly there in order to attack the growing fleets of US bombers.

In November/December 1942, the Fw 190 made its air combat debut on the Eastern Front, finding much success in the specialized ground attack units called Schlachtgeschwader (Battle Wings or Strike Wings) from October 1943 onward.

Though Soviet pilots considered the Bf 109 the greater threat, the Fw 190 and its pilots proved just as capable as the 109 in aerial combat. In the opinion of German pilots who flew both, the Fw 190 provided increased firepower and, at low to medium altitude, maneuverability. It was not until very late in the war that

Soviet aircraft truly matched it in combat.
The Fw 190A series' performance decreased at high altitudes (usually 6,000 m (20,000 ft) and above), which reduced its effectiveness as a high-altitude interceptor and made it perform poorly relative to the Mustang.

This problem was known from the start and there had been ongoing efforts to address this with a turbosupercharged BMW 801 in the B model, the C model with the Daimler-Benz DB 603, and the D model with the Junkers Jumo 213.

Problems with the turbos meant only the D model would see service, entering service in September 1944. While these "long nose" versions gave them relative parity with Allied opponents, it arrived far too late in the war to have any real effect.

The Fw 190 was well-liked by its pilots. Some of the Luftwaffe's most successful fighter aces claimed a great many of their kills while flying it, including Otto Kittel,Walter Nowotny and Erich Rudorffer.

Italeri is a prolific model company based in Italy. They make all manner of model subjects in the popular scales.
THE KIT:

This kit came in a shrink-wrapped end opening type box. I am no fan of this type of box, because invariably parts or the decal sheet will find their way past the end flaps to become lost. Give me a tray and lid type box any day of the week.

The box art shows a Fw-190A-8 flying along above the clouds. It has a dark grey spine over light grey sides that have a mottle of a medium grey. A wave pattern of light grey and dark grey is over the wing tops and the undercarriage is a medium grey.

The propeller spinner has black and white bands around it. It carries a red fuselage number 19, followed by a large black German cross outlined in white and a red fuselage band with a black horizontal stripe over it.

There is a personal motto in German with a shield on it that is below the fuselage on the sides. No swastika is shown on the tail, nor is there one included on the decal sheet or is it shown in the marking schemes on the box bottom.

This is because the marking is a NO NO to be shown in some countries that Italeri markets their kits. There are white skeletal crosses above the wings and black ones with white outline below the wings.

The first one is the box art one of the A-8 version as a 3-view.

The second 3-view is of a F-8 version in the same camouflage scheme as the A-8. It has a red band around the cowling and a red rudder.

The sides of the fuselage have a double black chevron followed by a black German skeletal cross and a black horizontal bar. No swastika is shown on the tail.

This aircraft is of an unknown unit, Germany, 1945.

One side panel has one paragraph histories of the aircraft in 6 languages, including English, marked with the flags of the countries that speak those languages.

The other side panel continues the histories in 4 more languages.

A white sticker is on this side panel that says “Distributed by the Testor Corporation, 620 Buckbee St., Rockford, IL 61104.

This kit contains 2 medium grey trees that are loose and not cello bagged, a loose clear tree, the decal sheet and the instructions.

The instructions consist of a single sheet, folded in the center to create 4 pages in 5 ¾” x 8 ¼” page format.

Page 1 of the instructions begins with a black and white photo of the model made up in the box art A-8 scheme, followed by the history of the aircraft in 10 languages, including English.

Page 2 has the parts trees illustrations. Some parts are shown X’d out, meaning they are excess and not needed to complete the model. ATTENTION USEFUL ADVICE is given in the same 10 languages, followed by a listing of Model Master brand hobby paint colors suggested to use to finish the model and an illustration of Italeri’s no. 961 hobby tool set.

Pages 3 and 4 give a total of 4 assembly steps.

​The bottom of page 4 has decal application instructions in 8 languages, including English. 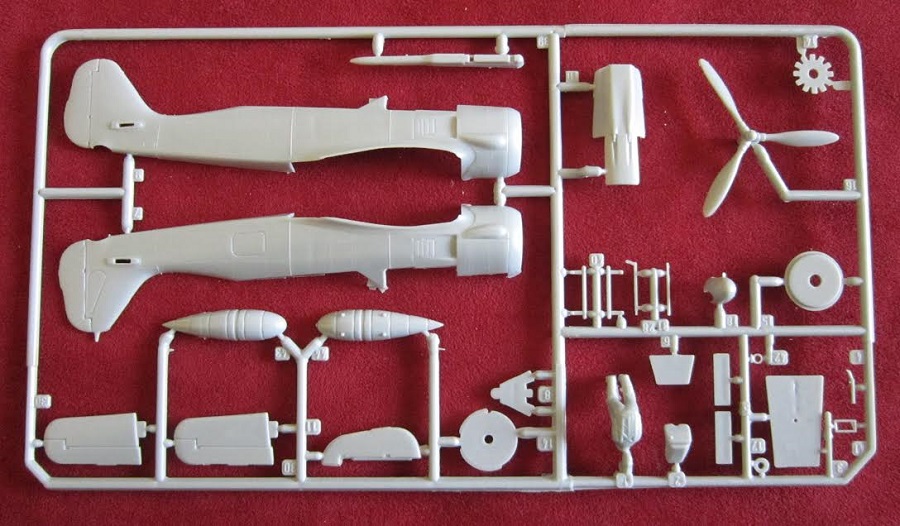 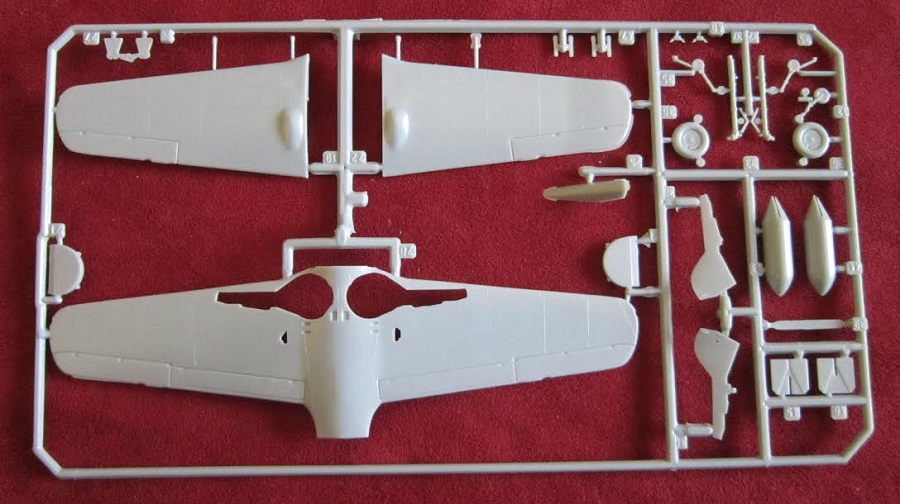 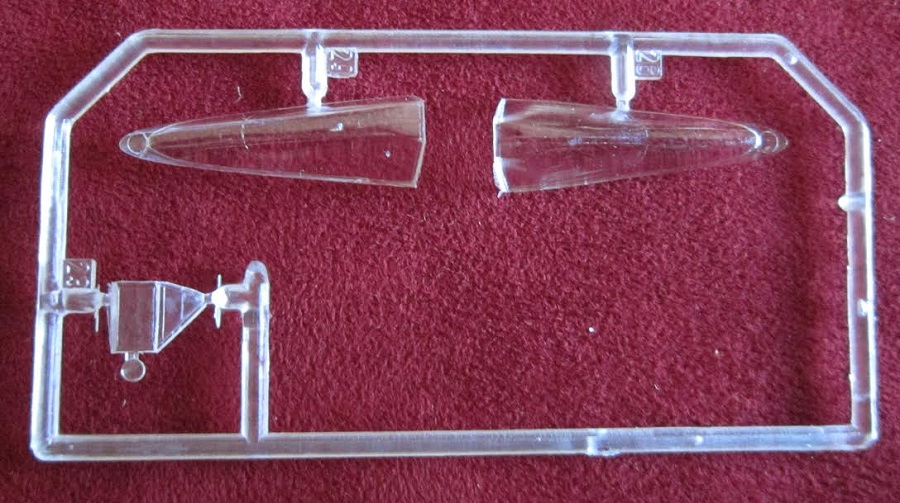 The marking instructions on the box bottom do not show where the stencil marking go – like the dotted wing panel section borders etc. We are not told what that personal slogan says in German below the cockpit on the sides.

​As already said, there is no swastikas on the decal sheet. There is an alternate German cross that is medium grey outlined in white that is not mentioned where to use it either. 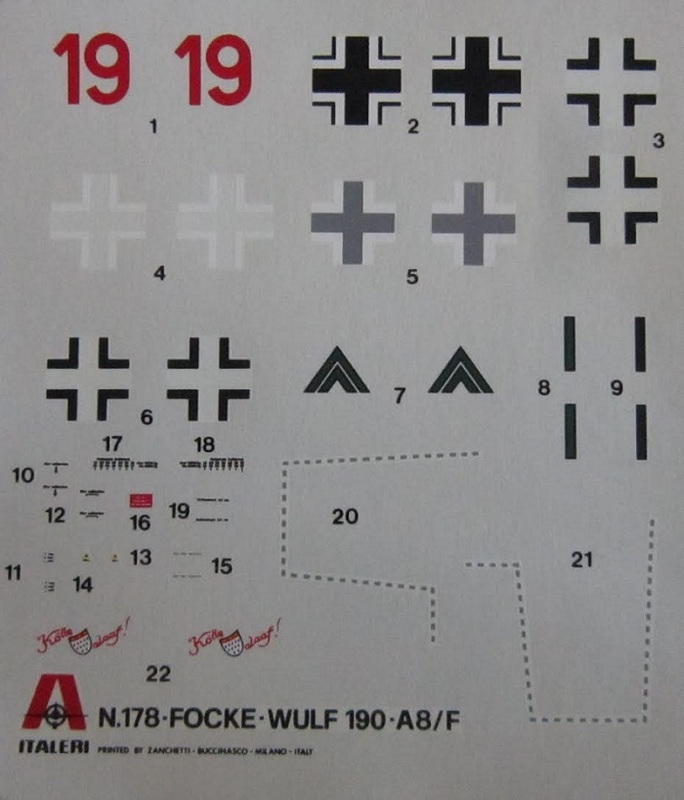 Highly recommended. I bought my kit for $6.00 back in the 80’ at a local hobby shop that went out of business.