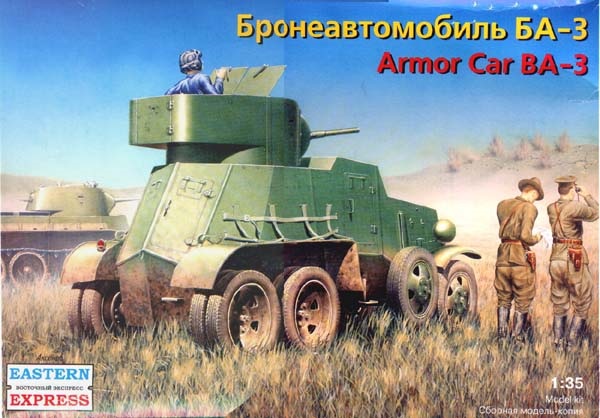 Production of the BA-3 was done at the Izhorskij and the Vyksunskij factories, in 1934, on the base of the BA-1. The hull of the BA-1 only underwent minor changes. The rear section of the hull was extended by 50mm, the engine compartment got air vent windows, the running board was shortened, and the rear fenders now accommodated fastenings for all-terrain tracks. The body was installed on the Ford Timken chassis. This was accomplished with the help of 10 brackets which were bolted to the side members through rubber gaskets.

The main improvement to this new vehicle was the turret and its armament. The BA-3 received the turret from the T-26 tank, which had 8mm of armor with paired weapons mount. This consisted of the 45mm 20K gun, model 1932/38 (supplied with 60 rounds) and the DT machine-gun.

For the first time in Soviet armoured car manufacture, the rear wheels of the BA-3 were outfitted with all-terrain track links in an attempt to improve mobility. These were known under the foreign name "OVERALL". Each track weighed 17kgs and was comprised of 25 80 x 35mm links. The length of one track was 4500mm, step size was 180mm. Installation of these tracks took the entire vehicle crew to do in 10 to 15 minutes.


Eastern Express is a model company based in Moscow, Russia. They just produce 1/35th scale AFV kits of Soviet items to my knowledge.

The box art shows a totally unmarked BA-3 somewhere on the Russian steppes, with a crewman in the turret hatch and two officers standing next to it.

One officer is reading a map, while the other officer is peering through a pair of binoculars. Behind the BA-3 a T-34 can be seen.

A side panel of the box gives us a color profile to use for one of the markings that are possible.

The other side gives box arts for 4 other kits in the Eastern Express line: a BA-6 armoured car, and three different variants of the BT-7 Soviet tank. No kit numbers for these kits is shown.

The largest cello bag holds a large and a medium sized tree of parts.

The smaller of the two cello bags holds a medium and small sized tree of parts and also a tree of black vinyl tires.

Although the parts trees are letter coded, the instructions does not always call out the letter codes. However, all parts are numbered on the trees.

Tree letter "B" is the black vinyl tires (11 of these). These are not enough to properly do the vehicle. BA-3s ran 10 tires on the ground and carried two spares, mounted on each side of the vehicle in front of the crew access doors. So, the modeler will have to leave one spare tire mount naked. This is odd, because the instruction sheet shows mounting one to each side. No idea why Eastern Express shortchanged us one. Not all is lost about this. Armo brand makes a single resin tire with rim designed to go on this kit. It is kit no. 350535. I have it and will add it.

There is no letter “C” parts tree. 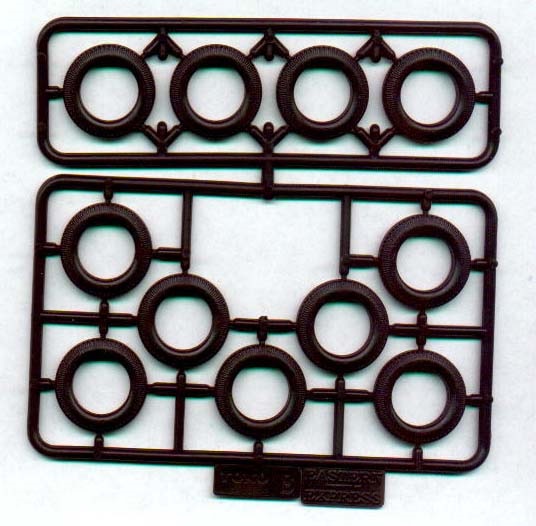 Tree letter "D" is large and holds: a gear shift lever, exhaust system, steering wheel, engine parts, some of the wheel rims, etc. (80 parts here). Oddly, on the parts tree, is a tab that says "TUKU". I have no idea what this refers to? Also, I think this parts tree is common to Eastern Express's kit of the GAZ-AAA Soviet Army truck. This is because the gear shift and steering wheel are never shown used inside this armoured car. There would be a beginning to detailing it in there, but one would have to come up with more... like seats, dashboard, foot pedals etc. Not to mention having to know just what the dickens the inside of the real one looked like. All hatches and doors can be posed open – with a little work – by the way. 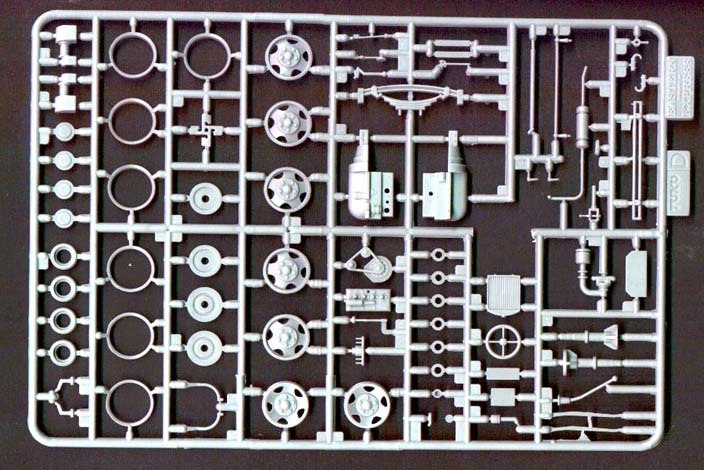 Lettering jumps now to tree letter "I". It holds: the frame, leaf springs, axles, some of the wheel centers, etc. (25 parts here).

There is no letter “J” parts tree. 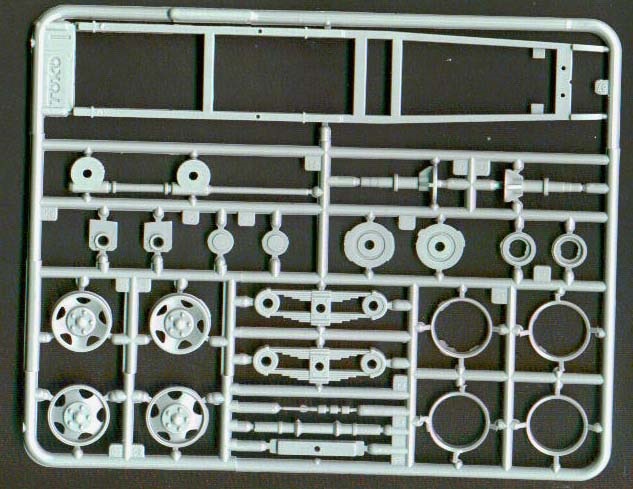 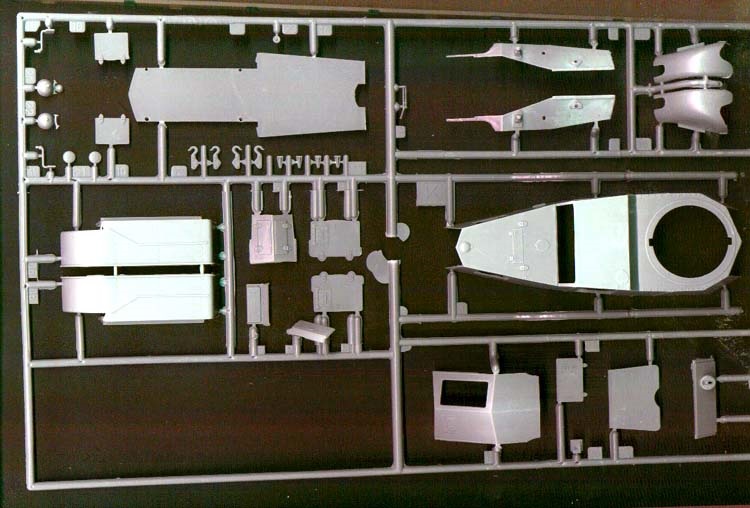 Small tree, letter "L" holds all the turret parts (20 parts here). There is some minor flash on this tree, but nothing to get too excited about. 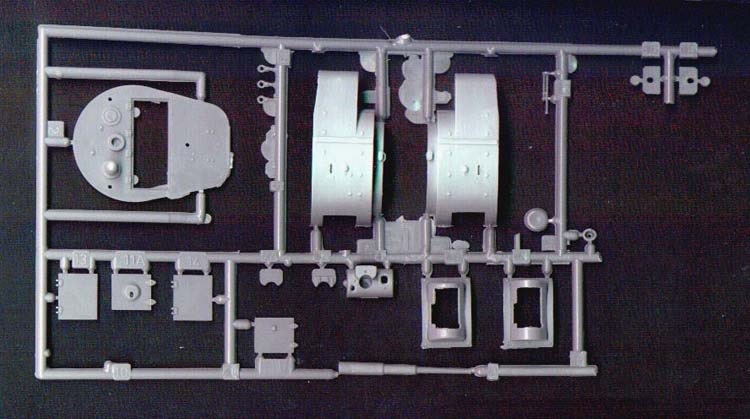 Page one gives us the box art, in black and white, at the top. It is followed by the history of the vehicle, in Russian and English. The bottom of the page is devoted to an international assembly symbols explanation.

Pages two through seven give us 20 assembly steps. In step 7 we are asked to shorten the frame's rear by 10mm with a razor saw. So, pay attention at that point. Also, in step 10, we are asked to bevel the ends of some suspension arms.


Page eight of the instructions gives painting and marking instructions, plus box art of Eastern Express' kits of the GAZ-AAA Soviet Army truck and the BA-6 armored car.

The decal sheet gives a series of various colors of solid and dotted lines, squares, and numerals. It is explained, on the instruction sheet, how to combine these for the markings for different companies, platoons, and regiments in the Soviet Army. 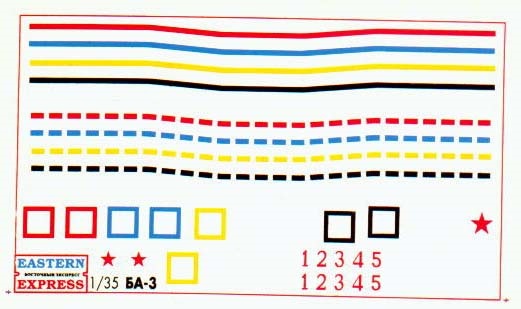 This looks to be a neat kit, once it is built. Except for shorting us a tire and no interior detail.

I have two PART brand PE sets designed to go on this kit. One set is a lot of exterior details for the car, set no. P35-049. The other set is kind of neat. It is a set of PE individual tracks that fit around the rear two sets of wheels for winter traction in snow and ice. However, that set is NOT for the beginner. Each link has multiple parts, with some bending to be done and you have to scratch build the connecting pins from stretched sprue. One set does give you a photo negative part that is the dashboard instruments, but you’d have to come up with seats, levers, steering wheel and whatever was inside the BA-3. I also purchased a set of Armo BA-6 Wheels For Eastern Express Model #35 525 for this kit which takes care of the missing wheel and are better detailed. 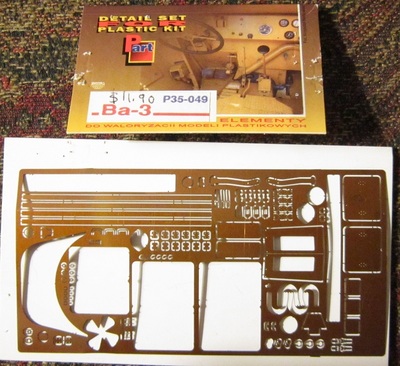 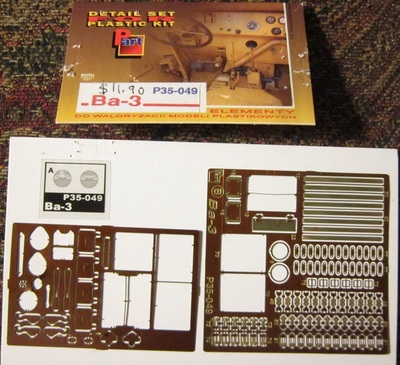 I also have a set of plastic conical rivets by Grant Line to add any rivet work that should be on this armored car.

I have several M. V. brand headlight lenses. These are neat. They are bowl shaped and have a bright metal reflected molded inside them that makes them look like they are actually lit Various sizes of these are manufactured mainly for the model railroad modelers. 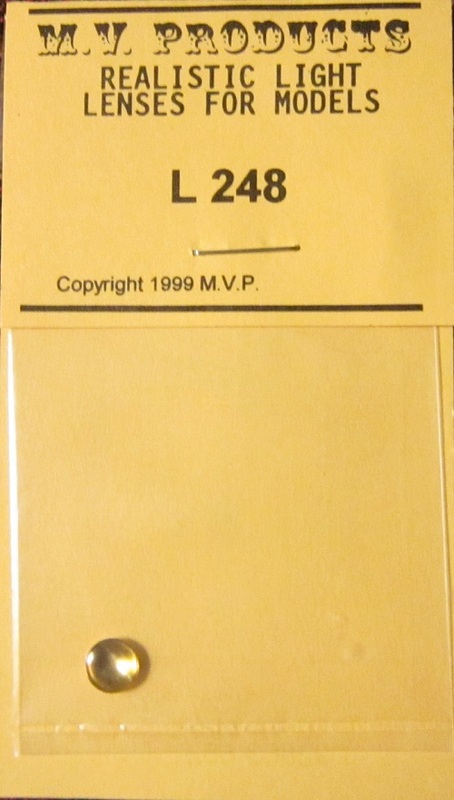 I have started some assembly of the kit and added a few of the PART brand PE parts.

In step 1, I assembled the engine with it’s 5 parts. I did not use the kit fan blades part no. D8. Instead the Part PE one was used.

In step 2, the carburetor and exhaust were added to the engine.

In step 3, the fenders were added to the floor piece. Raised pins were found below the fender parts and under the floor. I shaved and sanded these off.

In step 4, I added the fire wall and upper body shell to the floor piece.

In step 5, I added the Part PE engine compartment side vents instead of the kit’s plastic parts no. 7. The cab’s vision panel no. 5 was added and the Part PE machine gun mantle part and the kit’s machine gun, part no. 24 were mounted.  Two roof ventilator round hatch plates were added from the Part PE..

I then jumped to step 14. I assembled the turret sides and roof parts. I used the Part PE rear turret hatch door, instead of the kit part no. 11. The 4 main gun mantle parts were also assembled from the kit parts.

I then stopped assembly.

I have noticed that a lot of parts on the Part PE set for the exterior are not shown on the instructions and heaven only knows where these go,

I highly recommend this  kit. Eastern Express has otherwise done a very commendable job on this kit. Like I said earlier, all hatches and doors can be posed open and there is a very nice Ford engine included...that could be VIEWED if you open the hood doors. There are no figures in the kit nor clear parts.


It would be really nice if some after market company did an interior for this vehicle or perhaps the winter tracks mentioned in the history.

Figures that will work with this kit are readily available from Tamiya and  some other brands. I have the Tamiya set, and , one of which is a women to add to this car in a diorama. 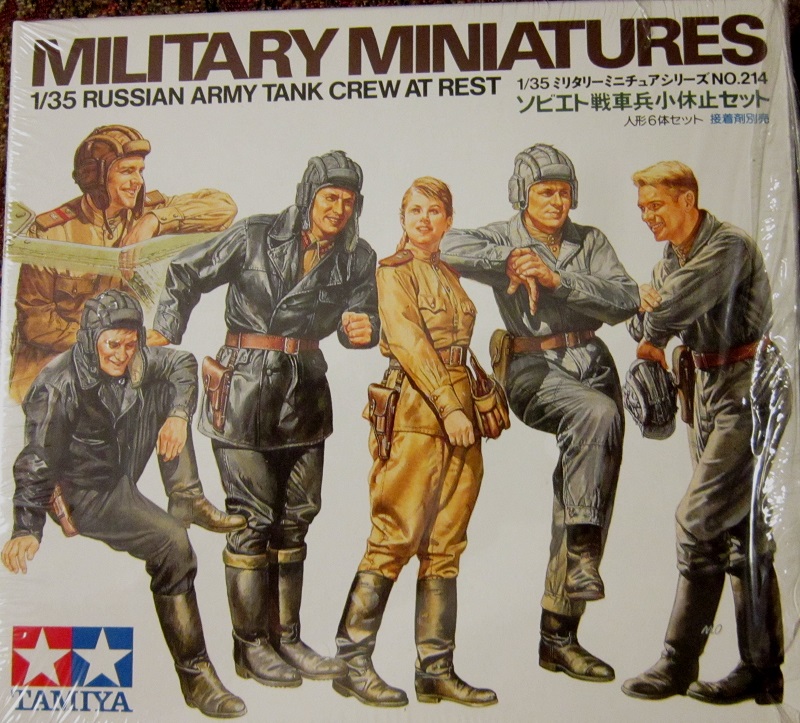 I purchased this model from Great Models for only $23.80 back in the 80’s before they went out of business and sold out to Sprue Bros.