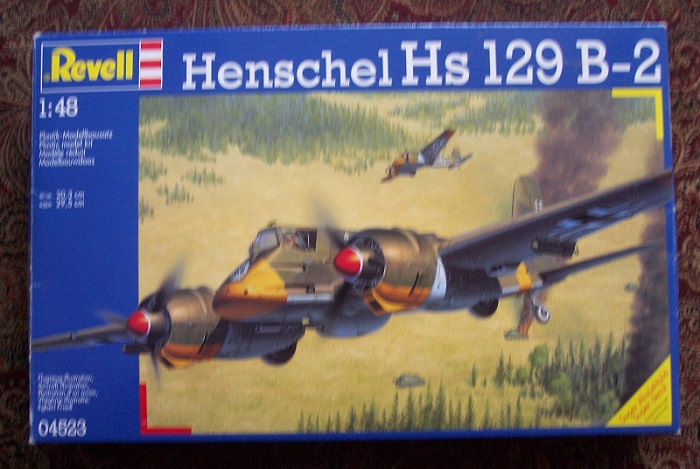 The Henschel Hs 129, often referred to by it’s nickname, the “Panzerknacker”, (tank cracker), was a WWII ground attack aircraft fielded by the Luftwaffe. Although likely to be a good anti-tank weapon, it never really had a chance to prove itself in any real way. The plane was produced in only small numbers and deployed during a time when the Luftwaffe was unable to protect them from attack.

By the middle of the 1930’s, the idea of using aircraft against ground targets had been “well-understood” to be of little use other than hurting enemy morale. Experiences during WWI had demonstrated that attacking the combatants was generally much more dangerous to the aircraft than the troops on the ground. This was a problem that was only beginning to become more acute with the introduction of newer weapons. For much of the 1920’s and 1930’s the use of aircraft was seen primarily in the strategic and interdiction roles, where their targets were less likely to be able to fight back with any level of coordination. For high-value point targets, the dive bomber was the preferred solution.

The Condor Legion experience during the Spanish Civil War turned this idea on it’s ear. Although armed with generally unsuitable aircraft, such as the Henschel Hs-123 biplane and the cannon-armed versions of the Heinkel He 112, their powerful armament and fearless pilots proved that the aircraft was a very effective weapon even without bombs. This led to some support within the Luftwaffe for the creation of an aircraft dedicated to this role, and eventually a contract was tendered for a new “attack aircraft”.

Since the main source of damage would be from rifle and machine-gun fire from the ground, the plane had to be heavily armored around the cockpit and engines. They also required the same protection in the windscreen, which required 75 mm thick armored glass. Since the aircraft was expected to be attacking it’s targets directly in low level strafing runs, the cockpit had to be located as close as possible to the nose to see the ground. One last requirement, a non-technical one, ended up dooming the designs; the RLM demanded that the aircraft be powered by “unimportant” engines of low power that were not being used in other designs.

Four companies were asked to respond, and only two of the resulting 3 entries were considered worthy of consideration. One was Focke Wulf’s conversion of their earlier Fw-189 reconnaissance plane, and Henschel’s Hs 129.

The Hs 129 was designed around a single large “bathtub” of steel that made up the entire nose area of the plane. It completely enclosed the pilot up to head level. Even the canopy was steel, with only tiny windows on the side to see out of and two angled blocks of glass for the windshield. In order to improve the armor’s ability to stop bullets, the fuselage sides were angled in forming a triangular shape, resulting in almost no room to move at shoulder level in the cockpit. There was so little room in the cockpit that the instrument panel ended up under the nose, below the windscreen, where it was almost invisible. Some of the engine instruments were moved outside an onto the engine nacelles, and the gunsight was mounted outside on the nose.

In the end, the plane came in 12% overweight and the engines 8% underpowered, and it flew like a pig. The controls proved to be almost inoperable as speed increased, and in testing one plane flew into the ground from a short dive because the stick forces were too high for the pilot to pull out. The Fw design proved to be no better. Both planes were underpowered with their Argus As-410 engines, and very difficult to fly.

The RLM nevertheless felt they should continue with the basic concept. In the end, the only real deciding factor between the two was that the Henschel was smaller and cheaper. The Focke Wulf was put on low priority as a backup, and testing continued with the Hs 129A-0. A series of improvements resulted in the Hs 129A-1 series, armed with two 20 mm MG 151/20’s and two 7.92mm MG 17’s along with the ability to carry four 50 kg bombs under the fuselage midline.

In May of 1942, after only 50 of the planes had been delivered, they started the new Hs 129B-2 model, side-by-side with the B-1. The only difference between the two were changes to the fuel system – a host of other minor changes could be found almost at random on either model. As time went on, these changes were accumulated into the B-2 production line until you could finally tell them apart at a glance. The main differences being the removal of the mast for the radio antenna, the addition of a direction-finding radio-antenna loop, and shorter exhaust stacks on the engines. There were 4 variants built of Hs 129’s. The aircraft was operated by the Luftwaffe, Hungary and Romania.

This kit is a re-pop of the Hasegawa molds. It comes in an end opening type box. The box is not shrink-wrapped. The end flaps are held shut with round pieces of Scotch tape. I am not a fan of these and prefer the tray and lid type. It seems that things find a way of falling out of this type of box, especially decal sheets like to slide out past the flap and get lost. Give me tray and lid any day. You can use the tray to hold stuff while building, not so with the end opening boxes, which also tend to be flimsier than tray and lid type.

The box art shows two Hs 129’s attacking T-34’s on the ground that are moving through a clearance in a forest. A side panel has 4 color photos of different areas of the model made up, a list of Revell brand paint colors suggested to use to finish the kit (in 4 languages including English). Next to these is a list of features in the kit, in the same four languages.

The back of the box shows the color box arts of  6 other aircraft kits in the Revell line and a picture of their airbrush, glue and paints.

It also says here that the skill level of this kit is a “4”, which means “a kit with up to 150 parts for the more experienced modeler”.

The decal sheet and instructions are loose. The decal sheet has a nice tissue to protect it’s face provided. There is a sheet of warnings about things to be careful about with the kit, in 20 languages including English. Unfortunately, to keep this kit politically correct in Germany, no swastikas for the rudder are provided.

Page one begins with a black and white photo of the model made up. This is followed by the history of the Hs 129B-2 in German and English.

Page two has “Read before you start” instructions in the multiple languages again.

Page 4 has the parts tree illustrations. Some parts (7 of them) are shaded out on these drawings, indicating that they are excess and NOT needed to complete the model.

Pages 5 through 10 give a grand total of 26 assembly step drawings. These are the usual Revell quality and are very thorough, telling us what to paint as we go along, what options there are etc. I have always loved Revell instructions for this.

Pages 11 and 12 give 2 paint scheme options as 4-views, with a few scrap drawings of the engine nacelles – were you apply decals showing the instruments that were installed there on the Hs 129.

The decals also have fuselage stripes and tons of stenciling. The dashboard instruments are provided as a decal too. Again, there are no swastikas provided for the rudder. This is because this kit is produced in Germany, where that marking is a big no no. 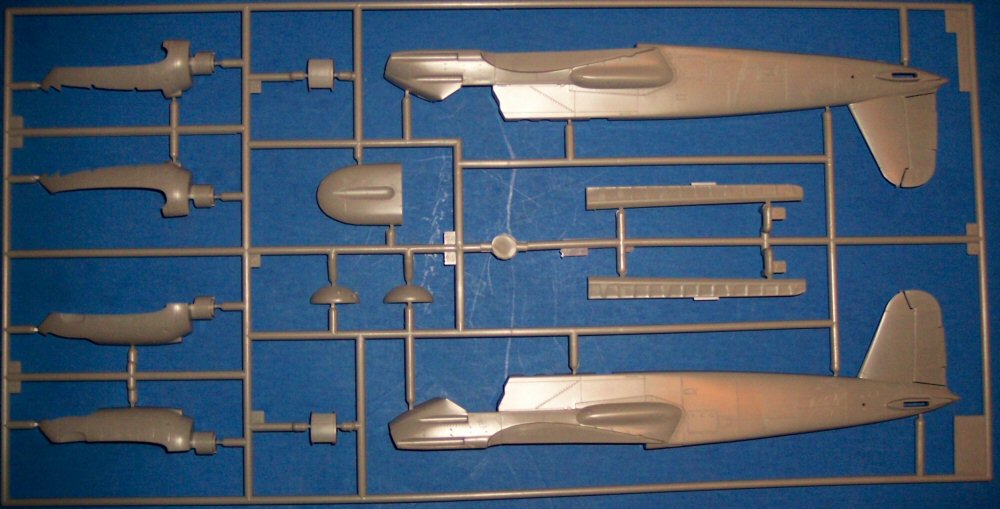 Large letter B tree holds the wing halves, with the lower wings being full span – setting the dihedral nicely (3 parts) 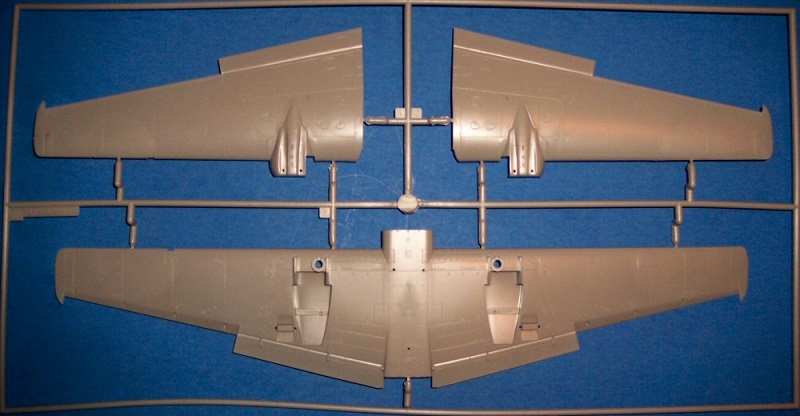 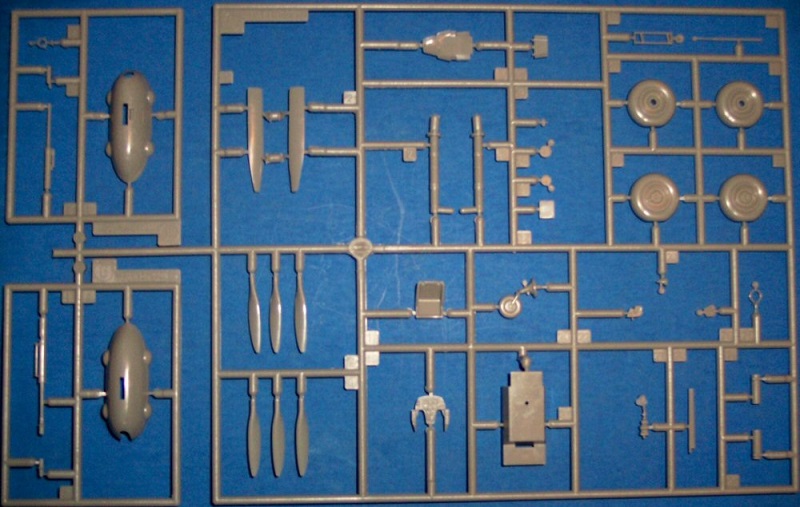 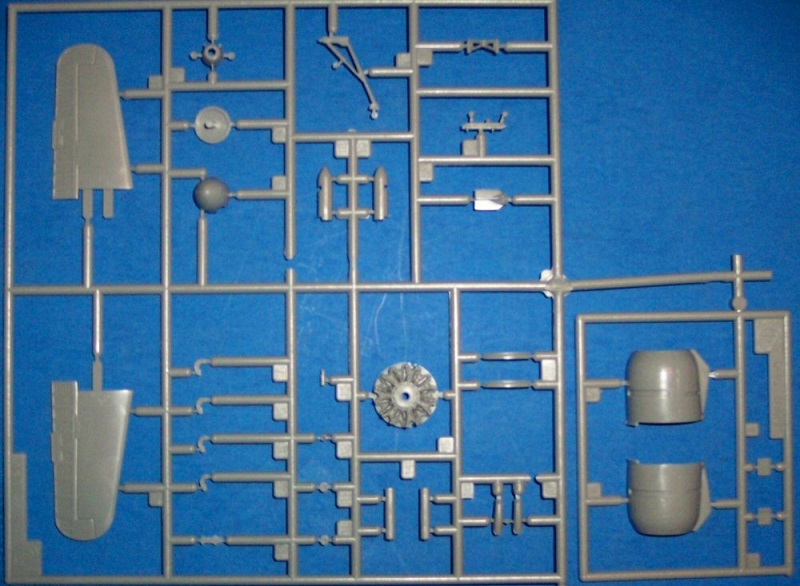 There is a small tree of black vinyl poly-caps in the kit to hold the propellers and allow them to rotate. (4 parts) Two of these caps are spares and not needed.

The decal sheet (already described above) and the instruction booklet complete the kits contents.

This is one neat subject. This kit is a vast improvement over the old Ertl/Esci kit in 1/48th of years ago. There is really no comparison as far quality and detail. This Revell of Germany (Hasegawa mold) wins hands down there. Highly recommended.

I purchased my kit at a hobby shop that was having a going out of business sale. So, I got a few bucks off the MSRP.