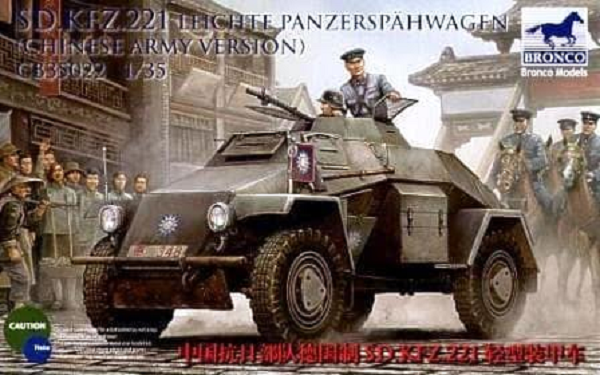 Designed to meet operational requirements including reliability, run on a variety of grades of fuel, simple construction and good off-road performance the first such vehicle was the Sd Kfz 221.

This proved too small and too lightly armed, so in 1936-37 a heavier version was planned, using one of two standard chassis for four-wheel armoured cars, one with a front-mounted engine, the other rear-mounted version, was used in the Sd Kfz 222, which became the standard light armoured car in German army service until the defeat of Nazi Germany.

The vehicles were developed by Eisenwerk Weserhütte of Bad Oeynhausen by using the chassis of the type Horch 108 standard heavy off-road car with an angled armoured body and turret.

Used by the reconnaissance battalions (Aufklärungs-Abteilung) of the Panzer divisions, the type performed well enough in countries with good road networks, like those in Western Europe.

However, on the Eastern Front and North Africa, this class of vehicle was hampered by its relatively poor off-road performance.

The Sd Kfz 222 was fitted with heavier armament and larger turret than the Sd Kfz 221 but it was still comparatively cramped and lacked top protection other than a wire screen designed to allow grenades to roll off, but this made using the main armament problematic.

Co-axially mounted with the machine gun both weapons were pintle-mounted, and fitted with an elevation and traverse mechanism and floor-mounted firing mechanisms.

The turret was rotated by the traversing weapons rather than the weapons being fixed to a traversing turret. There was thus no bearing-ring and no turret basket, only a fighting compartment largely obstructed by the breaches of the weapons.
When the limitations of the vehicle were highlighted during the invasion of the Soviet Union in 1941 the Sd Kfz 222 was gradually replaced in the reconnaissance role by the Sdkfz 250 half-track, but the turret and armament of the Sd Kdz 222 was sometimes retained.

Despite its shortcomings (the Sd Kfz 250/9 variant was a Sdkfz 250 fitted with a top plate surmounted by the same turret used for the Sd Kfz 222 with the same pintle-mounted guns refitted to the half-track and captured Sd Kfz 222s were examined by Soviet designers before they created the similar BA-64 light armoured car.

Front and sides were made of 8 mm (0.3 in) RHA; thinner 5 mm (0.2 in) plates protected the top, rear, and bottom. Cast vision ports later replaced ports cut into the armour.

The open-topped turret was fitted with wire mesh anti-grenade screens. Beginning in 1939, the front armour was increased to 14.5 mm (0.6 in). In 1942, the Ausf. B chassis was introduced; this had 30 mm of frontal armour, as well as a more powerful engine.

The car was used by Nazi Germany and China.
​THE KIT:

The box art shows a Sd.kfz. 221 moving down a city street with a crowd on the sidewalk and on a balcony viewing it.

Behind it is 3 men on horseback. They wear gray uniforms with speaked hats.
The 221 is overall medium-gray with a flue flag on the fender with a white sunburst on it. There is a blue circle with the white sunburst on the nose of the car and on a tool locker just behind the front fender on the sides. The white license plate on the front has a black chinese letter with 348 behind it.

Box art says it contains a detailed scale model for adult collector, not a toy. For modelers ages 14 and over, This box contains functional sharp edges and points. Actual model may vary from image on box.

One side panel begins by saying the kit contains a high quality decal for China, followed by illustrations of the brass PE fret and decal sheet in the box, kit is for modelers 14 and older in 10 languages, including English. Bronco's street, email and web address are provided.

The other side panel has a color 3-view illustration of the car in the box art scheme. It says the kit contains one set of the early pattern type wheels, with an illustration of one. There is a warning that the kit is not for children under 3 years due to small parts. Contains functional sharp edges and points . Keep out of reach.

The metal springs are missing in my kit. I have contacted Bronco in Hong Kong to see if they'll send me some. It will remain to be seen if they do so.

The instructions consists of a staple-bound booklet printed on slick-coated paper of 16 pages in 8 1/2 x 12 page format.

Page 1 begins with a color repeat of the box art, over the history of the Sd.Kfz. 221 in English, German and Chinese.

Page 2 begins with decal application instructions, over international assembly symbol explanations and a suggested paint color listing of Gunze Sangyo, Hobby Color, Humbrol and Tamiya brands of paints and READ BEFORE ASSEMBLING instructions in the 3 languages.

Page 4 through 14 give a grand total of 24 assembly steps.

Page 15 has a color side view of the Chinese version in the box art scheme. It mounts a MG  13 machine gun.

A second color side view shows a German Army version in overall panzer gray with a MG 34 machine gun mounted and no markings shown.

Page 16 has a 4-view of the box art scheme (already described above). It further shows the white license plates with the Chinese letter and 348 in black on them on each of the rear fenders. 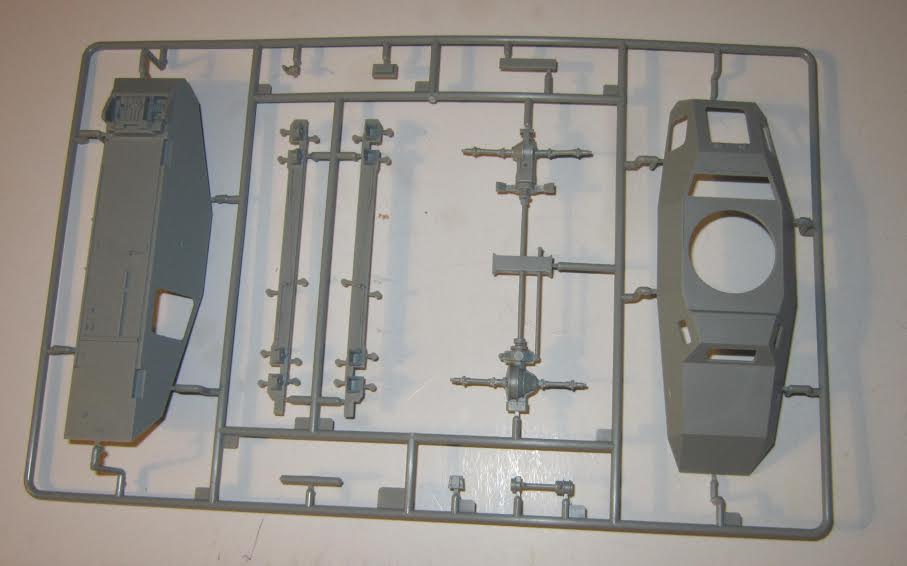 ​Medium-gray letter B tree holds: wheels, fenders, suspension arms and shock absorber parts etc. (34 parts)
​The 5 wheels are shaded out in the parts trees illustrations as being excess and not needed to complete the model. 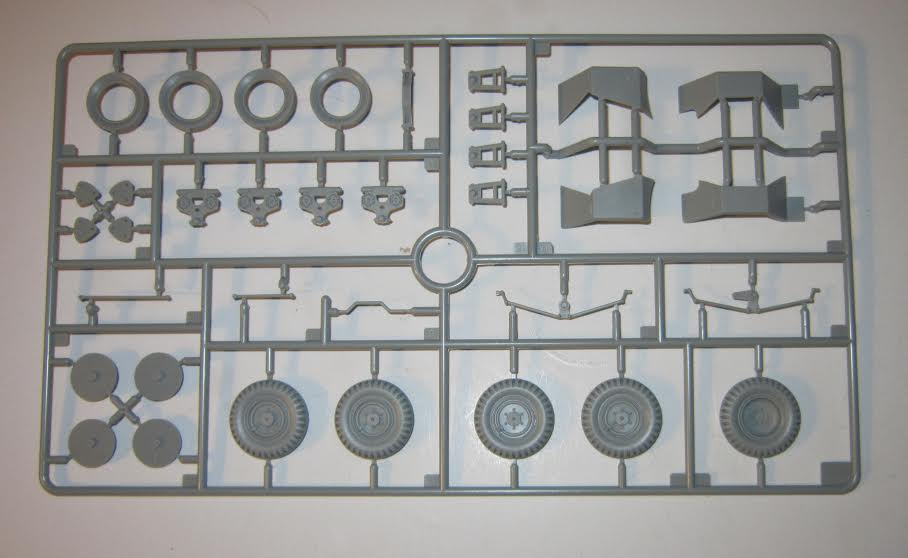 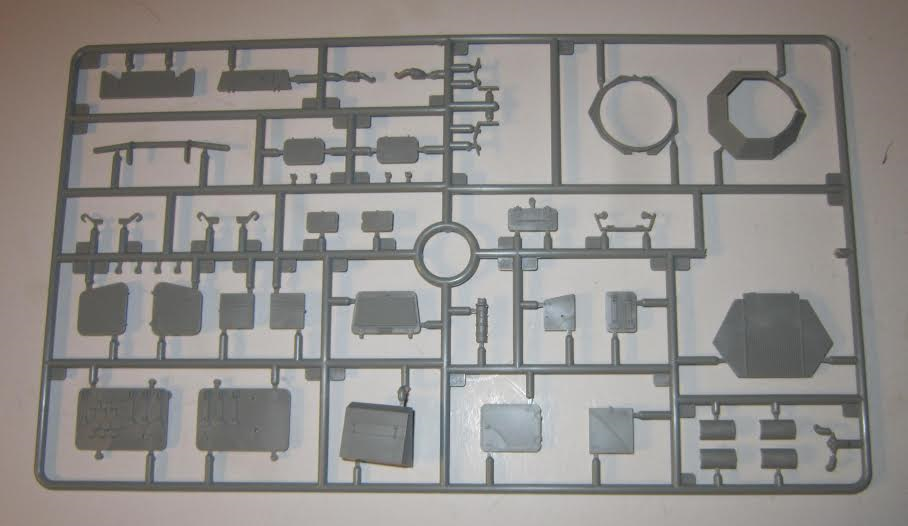 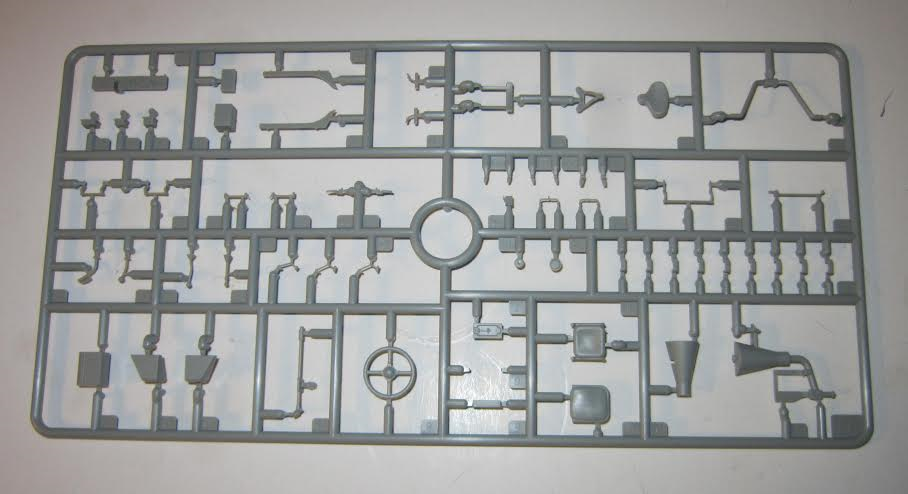 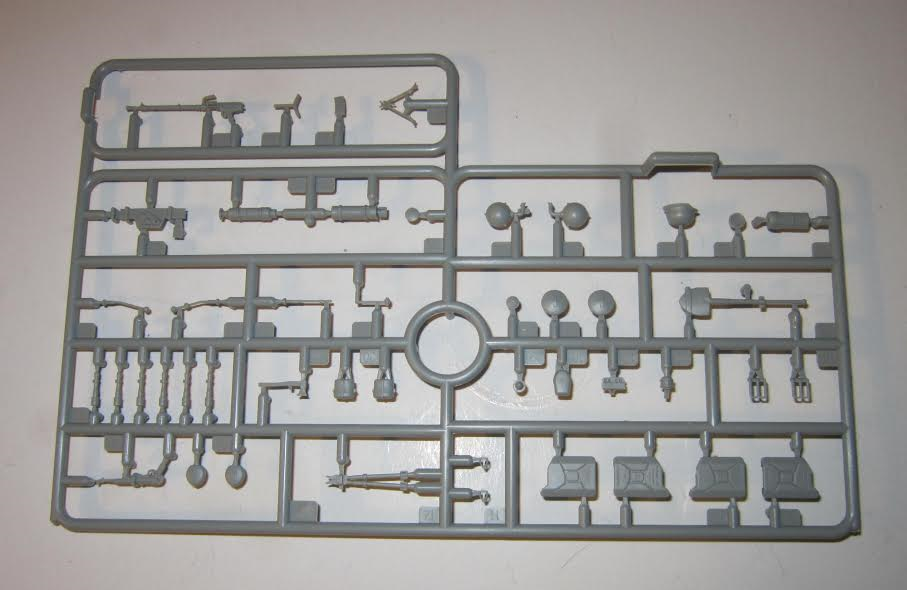 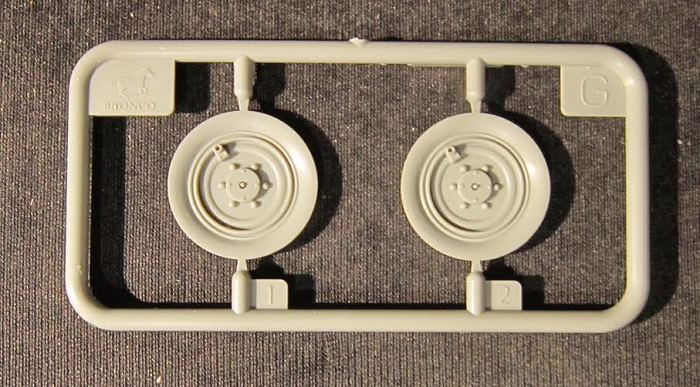 ​Lettering now jumps to the medium-gray letter N parts. These are the 5 tires for making the early version wheels. 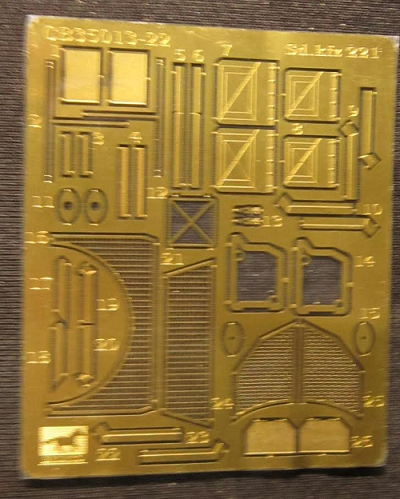 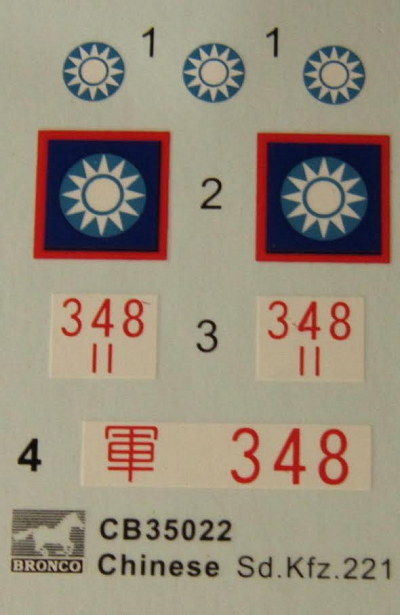 This is a neat kit with detail inside and out. There are no crew figures however.