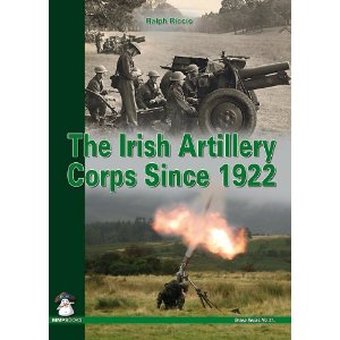 Latest volume in the popular Mushroom
Model Publications (MMP) “Green Series” tells the story of the artillery used by
the armed forces of the Republic of Ireland (Eire), from independence to the
present day. Following on from the author’s acclaimed book on AFV’s in Irish
service, this new book covers the operations and equipment of all the artillery
units in the Irish armed forces. As with the AFV’s in Irish service, a wide
variety of weapons was used, starting with hand-me-downs from the departing
British forces and in later years guns and mortars from several
nations.

From the early days of Independence and civil war to modern-day
peace keeping, from coastal artillery to light mortars, all units and their
equipment are described and illustrated. Massive coastal artillery, classic
British 18- and 25 pounders, and much more, all covered with photos, line
drawings, and the full history of their use in Ireland.

Mushroom Model
Publications is based in the UK. They have all their books printed in Sandomierz
Poland by their associate Stratus in English. Stratus also does their own line
of books in both English and Polish. This new book came directly from Stratus
heavily wrapped in layers of cardboard and some bubble wrap to protect it in the
mail.

The book contains no less than 232 black and white photos of Irish
Artillery Corps equipment. Added to this are 148 more color photos. Most of
these color shots are of weapons that are restored and on display at various
locations. A few are of vehicles.

This book is an excellent companion volume to “AFV’s in Irish
Service Since 1922”. The cover art for this book is shown on the back cover of
this book.

This book is essential reading for all military historians,
artillery enthusiasts and modelers.

I want to thank Dr. Roger M.
Wallsgrove, Editor-in-Chief of MMP and the folks at Stratus for this review
sample.

Information about all MMP books can be found on their website
at:

The North American distributor is
Casemate.