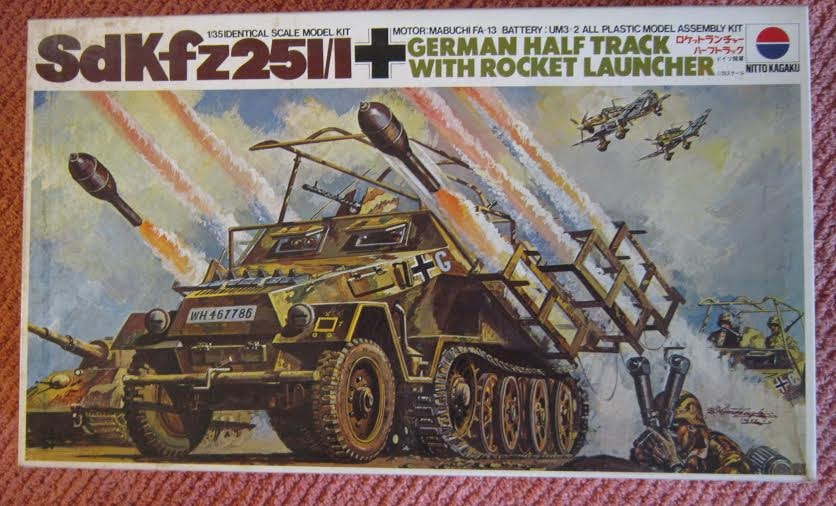 The Sd.Kfz. 251 (Sonderkraftfahrzeug 251) half-track was a WW2 German armored fighting vehicle designed by the Hanomag company, based on its earlier, unarmored Sd.Kfz. 11 vehicle. The Sd.Kfz. 251 was designed to transport the panzergrenadiers (German mechanized infantry) into battle. Sd.Kfz. 251s were the most widely produced German half-tracks of the war, with at least 15,252 vehicles and variants produced by various manufacturers, and were commonly referred to simply as "Hanomags" by both German and Allied soldiers

There were four main model modifications (Ausführung A through D), which formed the basis for at least 22 variants. The initial idea was for a vehicle that could be used to transport a single squad of 10 panzergrenadiers to the battlefield protected from enemy small arms fire, and with some protection from artillery fire. In addition, the standard mounting of at least one MG 34 or MG 42 machine gun allowed the vehicle to provide suppressive fire for the rifle squad both while they dismounted and in combat.

The armour plates were designed to provide protection against standard rifle/ machine gun bullets (like the 7.92×57mm Mauser bullet). The front-facing plates were 14.5mm thick; the sides were steeply angled, V-shape 8mm thick plates. This level of armour provided protection against normal (non-tungsten) rifle AP round, which could pierce about 8mm of vertical armour.

Positive aspects of the open top included greater situational awareness and faster egress by the infantry, as well as the ability to throw grenades and fire over the top of the fighting compartment as necessary while remaining under good horizontal cover. The downside was a major vulnerability to all types of plunging fire; this included indirect fire from mortars and field artillery, as well as small arms fire from higher elevated positions, lobbed hand grenades, even Molotov cocktails, and strafing by enemy aircraft.

The first two models (ausf A and B) were produced in small numbers from 1939. Ausf A and B models can be identified by the structure of the nose armor, which comprised two trapezoidal armor panels - the lower of which had an engine cooling vent. The B model, which began production in 1940, eliminated the fighting compartment's side vision slits.

The C model, which started production in mid-1942, featured a simplified hexagonal-shaped forward armored plate for the engine. Models A through C had rear doors that bulged out. The C model had a large production run, but was quite complex to build, involving many angled plates.

From early 1943, the D model was developed with the purpose of halving the number of angled body plates, simplifying the design and thus speeding up the production. D models can be easily recognized by their single piece sloping rear, with flat doors.

The standard personnel carrier version was equipped with a 7.92 mm MG 34 or MG 42 machine gun mounted at the front of the open compartment, above and behind the driver. A second machine gun could be mounted at the rear on an anti-aircraft mount.

Variants were produced for specialized purposes, including with anti-aircraft guns, light howitzers, anti-tank guns and mortars or even large unguided artillery rockets, as well as a version with an infrared search light used to spot potential targets for associated Panther tanks equipped with infrared detectors.

A strong design feature of the Sd.Kfz.251 was the large track area, with the characteristic "slack track" design with no return rollers for the upper run of track. The SdKfz 251 also had the Schachtellaufwerk system of overlapping and interleaved main road wheels common to virtually all German halftracks of the period.

This lowered the ground pressure and provided better traction, at the cost of much greater complexity in maintenance. The 251 also had tank steering, whereby the normal steering wheel moved the front wheels, but after more turning of the steering wheel, the tracks are braked to cause turning, like on a tank.

However, the interleaved and overlapping main road wheels shared a major problem with the Tiger I and Panther tanks that also used such roadwheel configurations - in muddy or winter weather conditions, such as those during a mud season (rasputitsa) or the winter conditions, accumulated mud and snow could freeze solid between the road wheels, immobilizing the vehicle.

Nitto Kagaku is an old prolific model company based in Japan. They manufacture all manner of model subjects in the popular scales.

The box art shows a Sd.Kfz. 251/1 firing it's rockets. In the background is a Tiger tank and another half track. Two Stukas are flying over.

The half track is in a wave pattern of earth-yellow, red-brown and dark-green, with a German cross followed by a white G on it's sides and a white license plate with black no. WH 467785 on the nose. A soldier is laying beside the half track looking through a pair of "Donky-ears" type binoculars.

One side panel of the box has the history of the half track in Japanese and English and MADE IN JAPAN.

​The other side panel has 4 color box arts of other AFV kits that Nitto makes:

2 different U.S half tracks (no nomenclatures given)
A Sd.Kfz. 251/1 without the rockets.
A repeat of the box art of this kit.

​Parts trees are not alphabetized. They are however illustrated in the instructions and do have part number tabs next to the parts on them.
​
WHAT'S IN THE BOX:

Page 1 has a black and white repeat of the box art over the history of the half track in Japanese.

Page 3 through 7 give a total of 17 assembly steps.

Page 8 is the painting and marking instructions with three 3-views:

1. A Sd.Kfz. 251/1 and trailer in a base of earth-yellow, with red-brown and dark-green bands on it. It has German cross on the sides, SS license no. SS 482 231 on the front and rear, choices of 4 different division markings and 14 different tactical markings. These marks are not identified.

2. A Sd.Kfz. 251/1 and trailer in overall panzer-gray with either a letter G or K on the front and rear, German cross on the sides, license no. WH 467 783 on front and rear and the choice of 14 different tactical markings.

3. A Sd.Kfz. 251/1 and trailer in overall earth-yellow. It has a Afrika Korps palm tree and swastika insignia on its sides, choice of 2 different division marks and the 14 different tactical marks. License plate no. WH 467 783, which I think is wrong as its the same as the one in the 2nd scheme.

There is a Luftwaffe license plate no. of WL 440170 on the decal sheet that could be used.

Assembly step 10 shows a part tree of figures and their equipment and instructions for their assembly. However, this tree is not included in my kit. Strange! 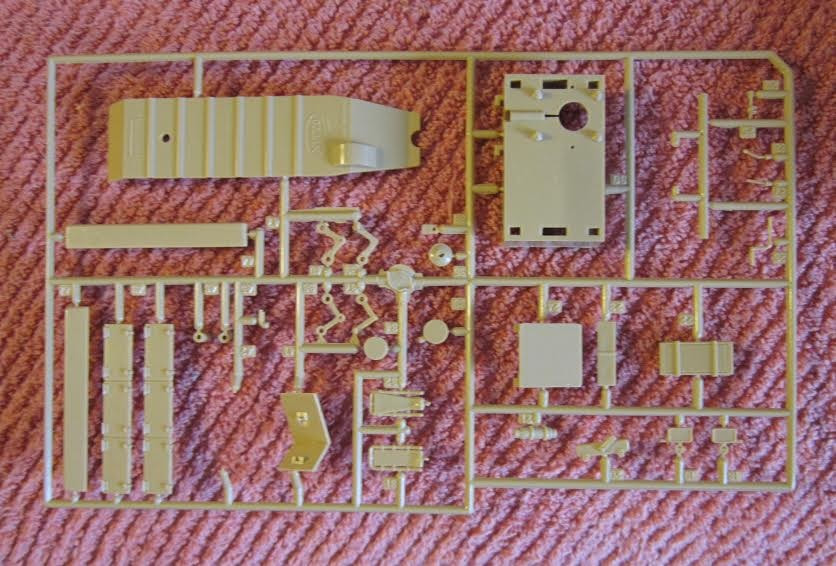 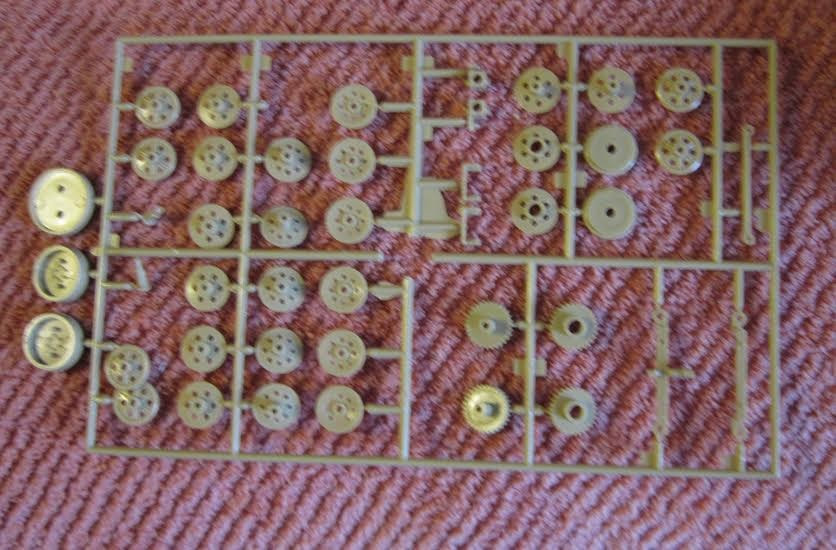 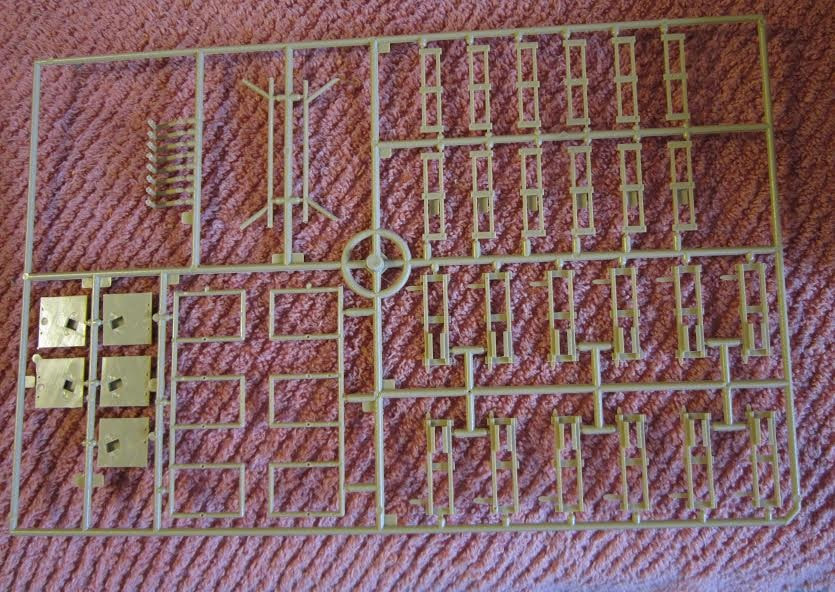 ​The fourth large light-tan tree holds: rocket halves, floor, sides, banister aerial, trailer floor, walls and wheels etc. It serves as the battery box with power lines running from it to the half track. (28 parts). 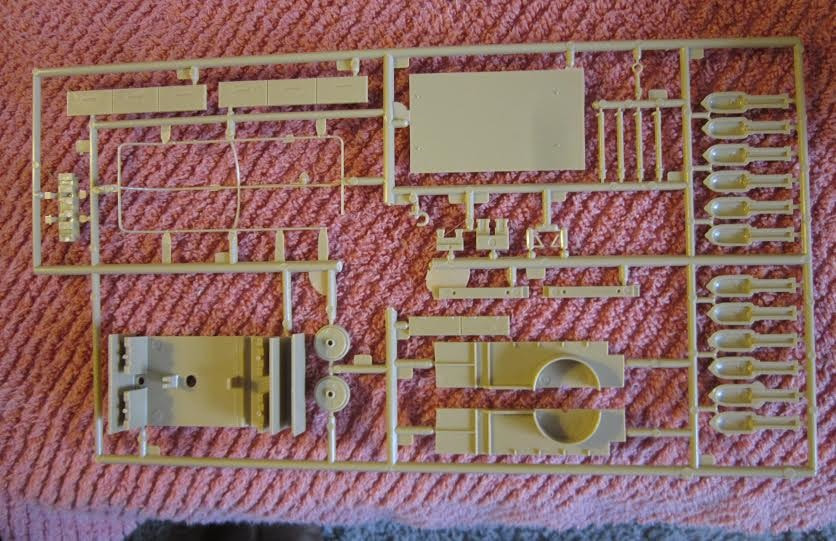 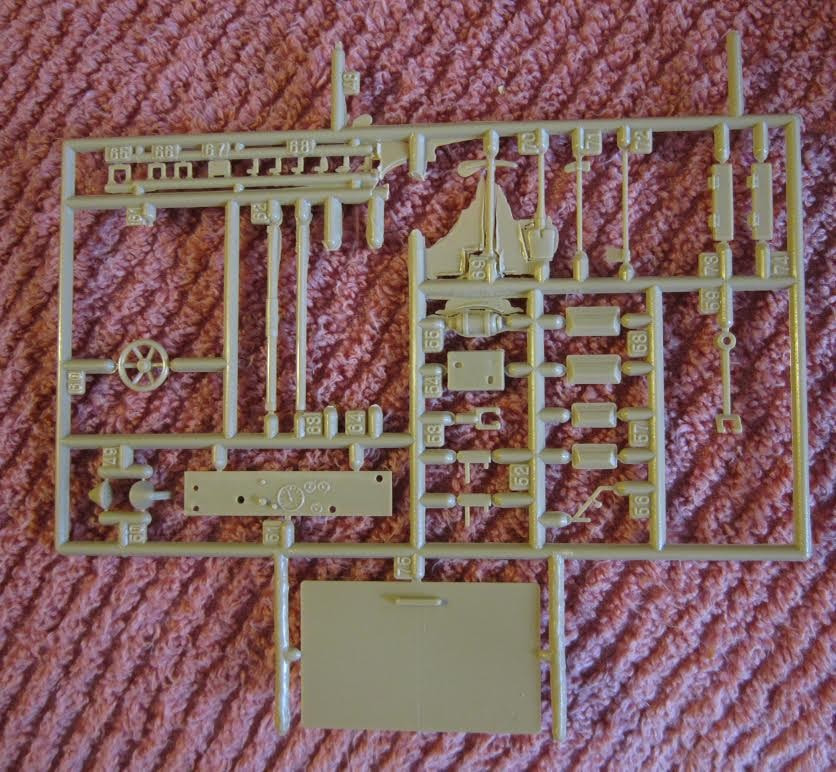 ​Next is the loose light-tan hull tub and roof parts. The hull tub has motorization holes in the bottom of it to fill to make a static model.

​The decal sheet includes steel helmet insignia (not needed because the figures are missing) and red cross symbols as well as the division and tactical markings. My sheet has the white markings yellowing with age...sigh. 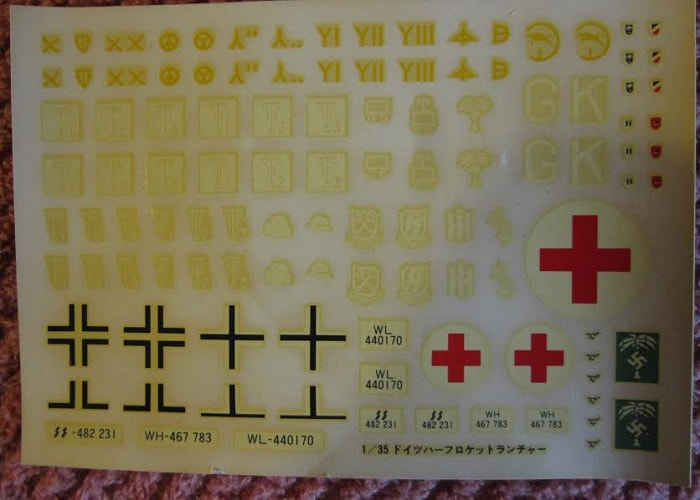 ​The black vinyl treads and front tires and the excess motorization hardware complete the kits contents.

There is no electric motor in this kit either. 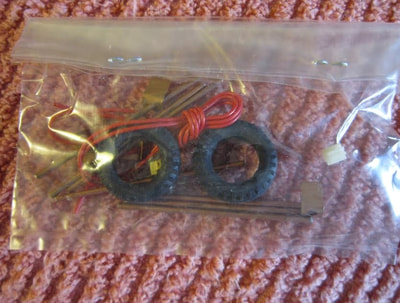 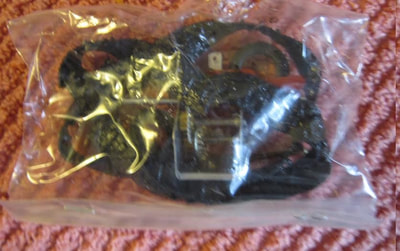 ​The model is nicely detailed, but where are the figures shown??